Reticular opacities seen on HRCT in patients with diffuse lung disease can indicate lung infiltration with interstitial thickening or fibrosis. Three principal patterns of reticulation may be seen. These are interlobular septal thickening, honeycombing, and irregular reticulation.

Interlobular septal thickening is an uncommon manifestation of diffuse lung disease, but is easily recognized on HRCT.

When interlobular septa are abnormally thickened, they are easily seen and form a web-like network of lines. These lines can usually be recognized as thickened interlobular septa because they outline what can be recognized as pulmonary lobules because of their characteristic size (1 to 2.5 cm) and polygonal shape and because a centrilobular artery is usually visible in its center as a dot-like or branching opacity (Fig. 2.1).

The presence of a few thickened interlobular septa can be seen in a wide variety of diffuse lung diseases and is, in general, a nonspecific finding. For the purposes of differential diagnosis, thickened septa should be ignored unless they represent a predominant abnormality (Fig. 2.3A, B).

When significant interlobular septal thickening is present, the abnormal septa may appear smooth in contour (this is most common), nodular, or irregular. The morphologic pattern primarily determines the differential diagnosis (Fig. 2.4A–C, Table 2.1). 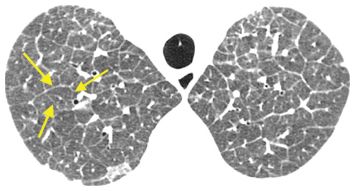 Nodular interlobular septal thickening is most commonly seen in patients with sarcoidosis or lymphangitic spread of tumor. This appearance reflects involvement of lymphatics within the septa, with the nodules representing clusters of granulomas or tumor nodules (Fig. 2.4B, Table 2.1). In sarcoidosis, nodules are almost always seen in other locations as well, including the peribronchovascular regions and the centrilobular and/or subpleural regions. This appearance reflects a perilymphatic distribution of nodules, described in Chapter 3. 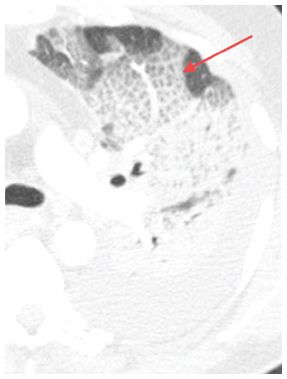 Intralobular interstitial thickening. HRCT in a patient with pulmonary edema. The interconnecting lines (arrow) are on a smaller scale than interlobular septa.

Irregular interlobular septal thickening usually reflects lung fibrosis and is similar in significance to irregular reticulation, which is described later. The architectural distortion associated with fibrosis causes the septa to become jagged or angulated in appearance (Fig. 2.4C, Table 2.1). Irregular septal thickening may be seen with any cause of fibrotic lung disease, and other findings, such as honeycombing and traction bronchiectasis, are more helpful in the formulation of a differential diagnosis.

Honeycombing is easily recognized and indicates the presence of lung fibrosis. It is relatively common.

Honeycombing is the most specific HRCT sign of fibrosis. When honeycombing is present, one can be confident that the patient has fibrotic lung disease. To make a confident diagnosis of honeycombing, several HRCT findings must be present (Table 2.2, Figs. 2.5 to 2.8):

1.  Honeycombing always involves the subpleural lung. Unless lucencies are visible in the immediate subpleural region, honeycombing cannot be diagnosed with certainty.

3.  The cysts have a thick wall . The wall of honeycombing cysts should be easily seen. This finding helps in distinguishing honeycombing from emphysema or areas of subpleural air trapping.

As honeycombing becomes more severe, it extends inward to involve more central lung regions, and honeycomb cysts appear in multiple layers and clusters. In patients with extensive disease, the stacked appearance of cysts, sharing walls with one another, is what gives this finding its resemblance to a honeycomb. Remember that the interstitium adjacent to the fissures is also subpleural, and subpleural honeycombing may be seen in this location.

Differential diagnosis of smooth, nodular, and irregular interlobular septal thickening (ILS). When ILS is the predominant abnormality seen on HRCT, the differential diagnosis depends upon the morphology of the thickening. A. Smooth ILS. The diagnosis is most likely pulmonary edema or lymphangitic carcinomatosis. This represents pulmonary edema. B. Nodular ILS. The diagnosis is most likely sarcoidosis or lymphangitic carcinomatosis. This represents sarcoidosis. C. Irregular ILS. This usually represents fibrotic lung disease. 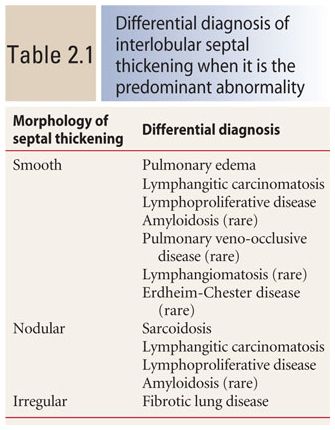 Cysts are subpleural in location

Cysts are empty; they contain no “anatomy”; they are black holes

The cysts do not branch

5.  The cysts of honeycombing should be of air attenuation (i.e., they should be black), having the same density as air in the bronchi.

6.  There should be no “anatomy” within the cysts . Vessels, bronchi, or septations are not visible within honeycomb cysts. The cysts are empty black holes. 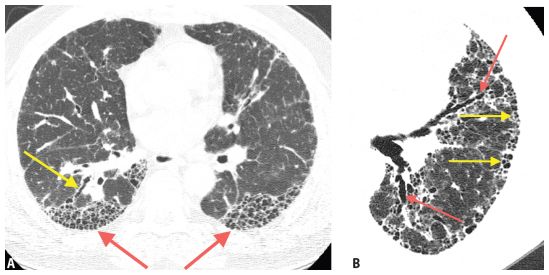 Features of honeycombing in two patients with usual interstitial pneumonia and idiopathic pulmonary fibrosis. A. HRCT shows advanced honeycombing. Note that cysts range from about 3 mm to less than 1 cm in diameter, are of air attenuation (i.e., black), have relatively thick walls, involve the subpleural lung, share walls, and are stacked in multiple layers (red arrows). There is associated traction bronchiectasis in the right lower lobe (yellow arrow). B. HRCT of a patient with idiopathic pulmonary fibrosis shows honeycombing (yellow arrows) and traction bronchiectasis (red arrows). The honeycomb cysts appear in clusters and layers in the subpleural lung. 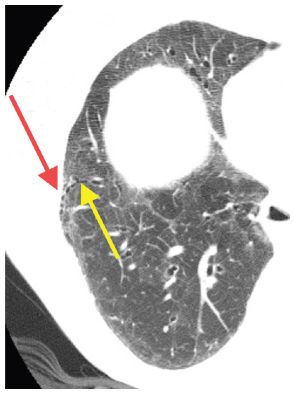 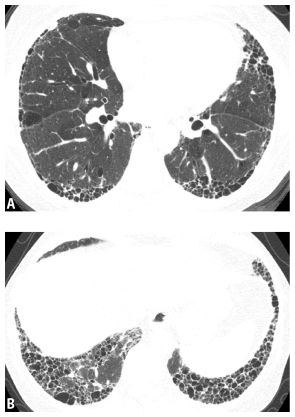 HRCT of a definite usual interstitial pneumonia pattern. Images through the mid-lung (A) and lung bases (B) show subpleural and basilar fibrosis with significant honeycombing. No ground glass opacity, mosaic perfusion, or diffuse nodules are seen.

7.  The cysts of honeycombing do not branch . Branching cystic structures, even in the subpleural lung, likely represent traction bronchiectasis (described below).

8.  Associated signs of fibrosis are present in the same lung regions . These findings include traction bronchiectasis, irregular reticulation, and volume loss. If cysts are not associated with other findings of fibrosis, they may represent emphysema or cystic lung disease.

Significance of Honeycombing and the “UIP Pattern”

Honeycombing is often associated with the histologic pattern termed usual interstitial pneumonia (UIP), and in some cases, honeycombing may be diagnostic of that pattern. However, there are a number of diseases that can show honeycombing on HRCT (Table 2.3).

The presence of honeycombing, by itself, is not sufficient to confidently diagnose what is termed a UIP pattern (the combination of HRCT abnormalities predicting the presence of UIP). In UIP, findings of fibrosis, including honeycombing, typically have a subpleural, posterior, and lower lobe predominance, and the posterior costophrenic angles are almost always involved (Fig. 2.8, Table 2.4). Also, features that would suggest an alternative diagnosis, such as isolated regions of ground glass opacity (seen in areas not showing findings of fibrosis), mosaic perfusion, air trapping, segmental or lobar consolidation, and small nodules, must be absent. The accurate HRCT diagnosis of UIP is particularly important in the diagnosis of patients with idiopathic pulmonary fibrosis (IPF; see Chapter 9). For a detailed review of this topic, refer to the paper by Raghu et al., listed at the end of this chapter.

When all of the features listed in Table 2.4 are present, a diagnosis of UIP can be made with a high degree of confidence (Figs. 2.7 and 2.8). In these classic cases, there is a close correlation between the HRCT and pathologic patterns, and lung biopsy is uncommonly performed. Remember that UIP is not a disease, but a histologic pattern with an HRCT correlate (i.e., the UIP pattern). 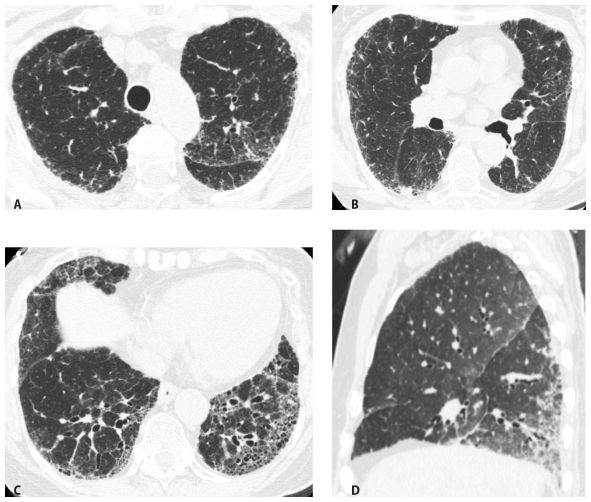 HRCT of a definite usual interstitial pneumonia pattern in a patient with idiopathic pulmonary fibrosis. HRCT through the upper lungs (A) and mid-lung (B) shows irregular reticulation as the predominant abnormality. Scan through the lung bases (C) shows subpleural and basilar fibrosis with significant honeycombing. The abnormalities predominate at the lung bases. D. Sagittal reformation shows predominance of abnormalities at the bases and in the posterior lung, including the costophrenic angles.

When a definite UIP pattern is present, the differential diagnosis of honeycombing is limited (Table 2.5) and generally includes four diseases or conditions: IPF, connective tissue disease, drug-related fibrosis, and asbestosis.

Think of IPF as idiopathic UIP. UIP associated with connective tissue disease, drug-related fibrosis, and asbestosis may be indistinguishable from IPF on HRCT (Fig. 2.9A–C), but there are often clinical clues that suggest the appropriate diagnosis. Patients with connective tissue disease may have joint symptoms, muscle weakness, rashes, or abnormal blood tests. Patients with drug fibrosis have a history of treatment with a drug that is a known offender such as cyclophosphamide, chlorambucil, nitrofurantoin, and pindolol. Patients with asbestosis usually have a clear exposure history and 90% or more have associated pleural thickening or plaques visible on HRCT.

Pneumoconioses other than asbestosis

Absence of segmental or lobar consolidation

Absence of discrete bilateral cysts (away from honeycombing)

If the patient has a classic HRCT appearance of a UIP pattern, and no appropriate history or clinical manifestations to suggest the later three diagnoses, a presumptive diagnosis of IPF will be made. As this diagnosis is based primarily upon the HRCT appearance, it is very important to be conservative in labeling a patient as having a UIP pattern.

Table 2.5  Differential diagnosis of common causes of a UIP pattern on HRCT