The incidence of pneumoconioses is decreasing in relation to other diffuse lung diseases, because of a greater emphasis on prevention in high-risk occupations. Because they often have HRCT findings that resemble other diseases, such as sarcoidosis or idiopathic pulmonary fibrosis (IPF), a clinical history of exposure is vital in suggesting the correct diagnosis of pneumoconiosis.

Most patients with a pneumoconiosis have an identifiable long-term exposure to a known offending agent. However, without knowledge of the exposure history, HRCT findings are commonly mistaken for another disease.

The most common HRCT abnormalities of pneumoconioses include nodules, fibrosis, and lymphadenopathy. Nodules may be perilymphatic or centrilobular in distribution. Fibrosis may appear on HRCT as honeycombing, irregular reticulation, traction bronchiectasis, and consolidation with architectural distortion, so-called progressive massive fibrosis (PMF).

Silicosis and a “Silicosis Pattern”

Silicosis (Table 16.1) is caused by chronic inhalation of silicon dioxide and is associated with professions such as glass manufacturing, sandblasting, mining, stone cutting, and quarrying. Silicosis results from inhalation of dust and subsequent drainage via the lymphatics. It is primarily characterized by nodules, lymphadenopathy, and fibrosis. Silicosis associated with chronic exposure is usually classified as either simple silicosis or complicated silicosis. A third form of silicosis, acute silicosis (silicoproteinosis), is less frequently seen. 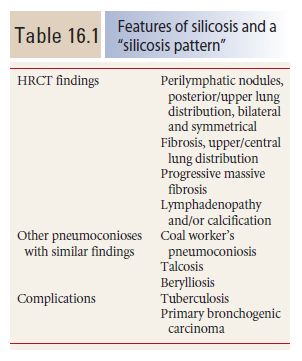 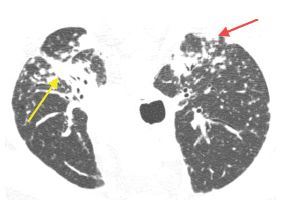 Simple silicosis is characterized by scattered nodules (Fig. 16.1). These predominate in the posterior upper lungs and demonstrate a perilymphatic distribution, affecting the centrilobular regions, peribronchovascular interstitium, interlobular septa, and subpleural interstitium (Fig. 16.2). As opposed to other causes of perilymphatic nodules, a predominance of centrilobular nodules (Fig. 16.3) may be present. Lung involvement is usually bilateral and symmetrical. The nodules are usually of soft tissue attenuation, are well defined, and may calcify. 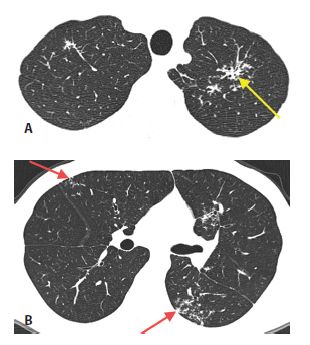 Perilymphatic nodules in silicosis. HRCT through the lung apices (A) and mid-lungs (B) shows patchy, clustered nodules. The nodules are predominantly located within the peribronchovascular (yellow arrow, A) and subpleural interstitium (red arrow, B).

Hilar and mediastinal lymphadenopathy may also be present (Fig. 16.4). Similar to sarcoidosis, the distribution of adenopathy is usually symmetric. Calcification of nodes may be present and may be diffuse or have a so called eggshell pattern, involving the periphery of the node.

Perilymphatic nodules in silicosis. A. A perilymphatic distribution of nodules is present, with nodules seen in the peribronchovascular (red arrow) and subpleural regions (blue arrow). B. A number of centrilobular nodules (region delineated by yellow arrows) are present, reflecting the inhaled nature of the disease. 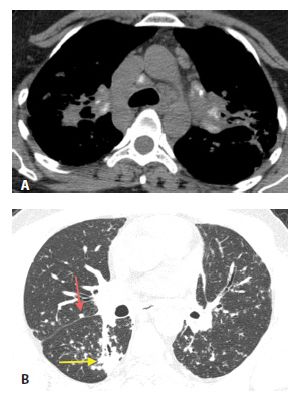 Lymphadenopathy in silicosis. Symmetric mediastinal and hilar lymphadenopathy with calcification is present (A) indistinguishable from that seen in sarcoidosis. Lung window (B) shows peribronchovascular (yellow arrow) and subpleural nodules (red arrow).

Some patients with chronic exposure develop progressive fibrosis, termed complicated silicosis. Fibrosis may be seen in association with perilymphatic nodules (Fig. 16.5) or as an isolated abnormality. Fibrosis is manifested by irregular reticulation and traction bronchiectasis with an upper lobe and peribronchovascular distribution. Confluent areas of fibrosis may produce consolidation with architectural distortion and traction bronchiectasis (Fig. 16.6). This is termed PMF. Pneumoconioses progress to PMF more commonly than sarcoidosis.

Acute exposure to large amounts of silica dust can result in a clinical syndrome and HRCT appearance that is markedly different from classic silicosis. In these cases, the exposure results in alveolar filling that closely resembles pulmonary alveolar proteinosis (PAP), both pathologically and on HRCT. This is termed acute silicosis or silicoproteinosis. The HRCT manifestations include extensive or diffuse bilateral ground glass opacity and consolidation. The combination of ground glass opacity and interlobular septal thickening in the same lung regions (i.e., crazy paving) is typical and indistinguishable from other causes of PAP (Fig. 16.7). Centrilobular nodules may also be seen, reflecting the inhaled nature of this disease.

Differential Diagnosis of a Silicosis Pattern 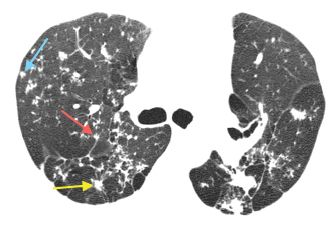 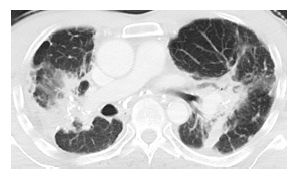 Progressive massive fibrosis, silicosis. Large mass-like conglomerates of central fibrosis are present, associated with architectural distortion and bronchiectasis. This appearance is most characteristic of silicosis, but can be seen with other pneumoconioses and sarcoidosis.

CWP exposure occurs in patients with an appropriate mining history. The nodules of CWP may be more ill-defined than those of silicosis, and calcification tends to be less common and central in location. Eggshell calcification is unusual in CWP. Fibrosis is less severe with CWP than with complicated silicosis, but conglomerate masses may be seen. 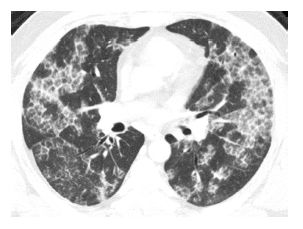 Silicoproteinosis. After an acute exposure to large amounts of silica dust, this patient presented with dyspnea and cough. HRCT showed a combination of ground glass opacity and interlobular septal thickening in the same lung regions. This “crazy paving” pattern is identical to that seen with alveolar proteinosis.