Fluid accumulation in the lungs may be the result of changes in pulmonary venous hydrostatic pressure, increased permeability of capillary endothelium, or a combination of these two. The HRCT features of these two processes show significant overlap and are often difficult to distinguish. The most important role of HRCT is in making a distinction between edema and other causes of pulmonary symptoms, such as pneumonia.

Edema fluid may accumulate within the interlobular septa, subpleural interstitium, and peribronchovascular interstitium. 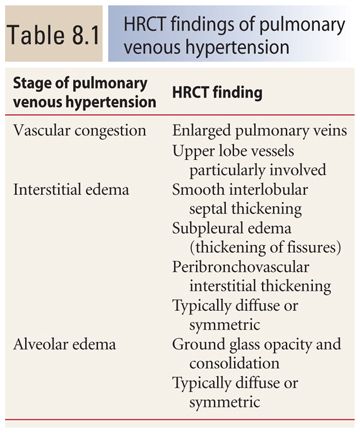 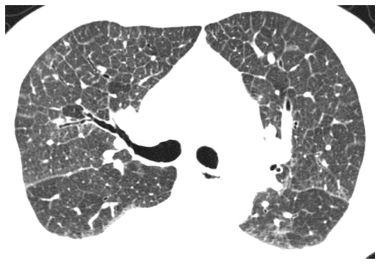 Pulmonary edema with smooth interlobular septal and fissural thickening. Multiple, smooth, thin, interconnecting linear opacities are noted, outlining polygonal structures, which can be identified as pulmonary lobules because of their characteristic size and shape and the presence of a centrilobular artery. These are the interlobular septa that marginate the pulmonary lobule. Pulmonary edema is the most common cause of this finding. Thickening of the major fissures is also seen. 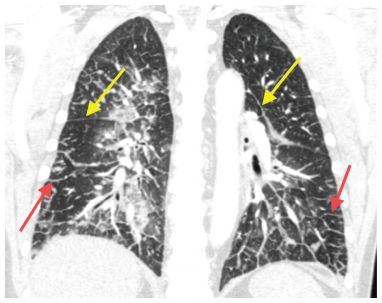 Edema fluid may also accumulate in the peribronchovascular interstitium. This may be the result of lymphatic drainage of edema fluid to the hila. On HRCT, thickening of the interstitium surrounding the central bronchi gives the appearance of bronchial wall thickening and a corresponding increase in the diameter of pulmonary arteries (Fig. 8.3).

Smooth interlobular septal and peribronchovascular interstitial thickening are often seen in association with findings of alveolar edema (Fig. 8.4). Their distribution is quite variable, but findings tend to be bilateral and relatively symmetric. While edema is often most severe in the dependent lung regions, this is not a constant feature. 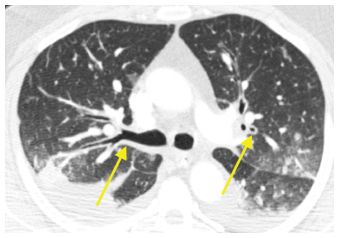 Pulmonary edema with peribronchovascular interstitial thickening. Fluid is seen in the interstitium adjacent to or surrounding the bronchi and arteries (arrows). This is easily confused with bronchial wall thickening. Note the lack of narrowing of the lumen of the bronchi. Ground glass opacity and pleural effusion are also present. 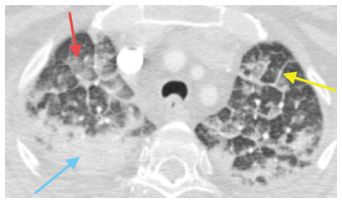 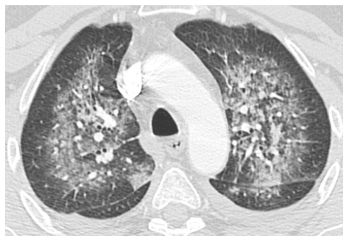 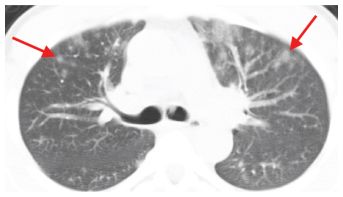 Pulmonary edema with centrilobular nodules. Ill-defined centrilobular nodules of ground glass opacity (arrows) are seen in the anterior lungs bilaterally. This is not an uncommon manifestation of edema and is often seen in association with other findings of alveolar edema.

The distribution of these abnormalities is typically diffuse or symmetric. More severe abnormalities may be seen in the dependent lung because of the normal hydrostatic gradient, but this is not always present. 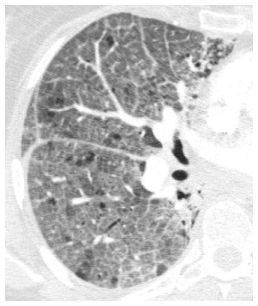 Pulmonary edema with crazy paving. A combination of ground glass opacity and smooth interlobular septal thickening is seen in the right lung. This finding is nonspecific, but pulmonary edema is one of the most common causes of this pattern in the acute setting. 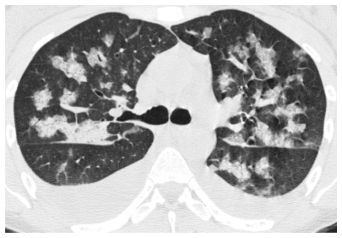 Pulmonary edema with lobular opacities. Lobular areas of ground glass opacity are present. The process is symmetric and associated with pleural effusions. Occasionally, causes of alveolar disease such as pulmonary edema may be very geographic such as in this case.

A patchy or lobular distribution of abnormalities may sometimes be present (Fig. 8.8), and in some patients, edema may be asymmetric (Fig. 8.9). Causes of asymmetric or focal pulmonary edema include the following: 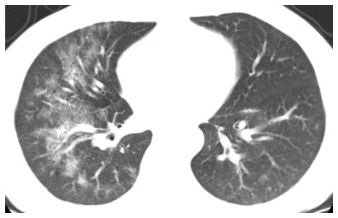 Asymmetric pulmonary edema. While edema is typically a symmetric process, unilateral or asymmetric edema is not uncommon. This patient was placed in a right side down decubitus position for a surgical procedure, explaining the unilateral right-sided edema. Patchy ground glass opacity and crazy paving are visible.