RB and DIP represent a similar reaction of lung to inhaled cigarette smoke, although they differ in their incidence, the severity of the specific abnormality present, and their association with symptoms. In the case of RB, cigarette smoke inhalation induces reactive changes in and around small airways, characterized by focal areas of alveolar macrophage infiltrate and mild interstitial inflammation. In DIP, there is more generalized intra-alveolar macrophage accumulation and inflammation. DIP is more commonly symptomatic than RB.

Pathologically, RB is seen in virtually all smokers, but it is responsible for symptoms in only a small minority of patients. RB is thought to represent a factor in the development of centrilobular emphysema. Chronic cellular infiltration and inflammation associated with RB, it is hypothesized, eventually leads to lung destruction and emphysema.

When RB is a cause of symptoms, the disease is termed respiratory bronchiolitis interstitial lung disease (RB-ILD).

Both RB-ILD and DIP typically present in young patients (peak age 30 to 40 years) and have a significantly better prognosis than most other interstitial lung diseases, with a good response to smoking cessation and/or treatment with steroids. Up to 25% of patients with DIP may eventually develop lung fibrosis in the absence of appropriate treatment.

HRCT Findings in RB and DIP

The HRCT findings of RB and DIP differ (Tables 11.1 and 11.2), but commonly coexist, given the overlap between these two entities. Typically, HRCT in RB/RB-ILD shows centrilobular ground glass opacity (GGO) nodules, reflecting the bronchiolar and peribronchiolar macrophage infiltrate typical of this disease (Fig. 11.1A, B). These nodules tend to predominate in the upper lobes and in central lung regions, similar to the distribution of centrilobular emphysema. There may be associated mosaic perfusion or air trapping, but this tends to be mild (Fig. 11.2A, B).

DIP almost always presents with GGO as the predominant finding. The GGO is typically subpleural and basal in distribution (Fig. 11.3), similar to the distribution of usual interstitial pneumonia and nonspecific interstitial pneumonia (NSIP). Scattered cysts or patchy emphysema may be associated with the areas of GGO (Fig. 11.4). The combination of GGO with associated cysts or emphysema in a smoker is strongly suggestive of this diagnosis. In a minority of patients, fibrosis develops in areas previously affected by GGO. This is manifested by irregular reticulation and traction bronchiectasis (Fig. 11.5). Honeycombing is rare. 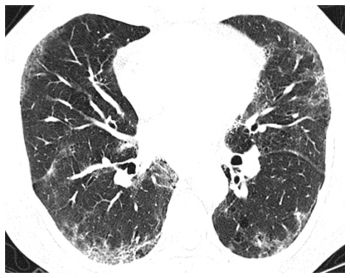 As RB and DIP represent a spectrum of abnormalities, an overlap of their typical findings may be present on HRCT in smokers (Fig. 11.6A, B). GGO may have a variable distribution from subpleural/basilar predominant to central/upper lobe predominant. Patchy GGO may be seen in combination with GGO centrilobular nodules. Cysts or emphysema, mosaic perfusion, and air trapping may be associated with any of these abnormalities.

The differential diagnosis of RB and DIP in a patient with chronic symptoms includes other disorders that produce GGO, ground glass centrilobular nodules, cysts, and mosaic perfusion. Hypersensitivity pneumonitis (HP) is a common cause of these findings (Fig. 11.7). Although it is thought that there is a reduced likelihood of HP in cigarette smokers, smoking does not preclude a diagnosis of HP. The presence of fibrosis in association with GGO or centrilobular nodules favors HP, because fibrosis is uncommon with RB/ DIP (Fig. 11.8). Also, mosaic perfusion and air trapping tend to be more severe in HP. 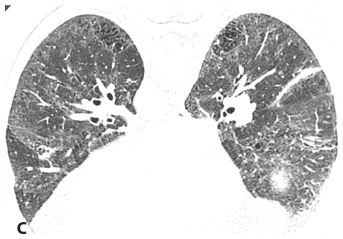