Diffuse lung diseases presenting with small nodules (less than 1 cm in diameter) represent a wide variety of entities in many different disease categories. HRCT is generally used to suggest a focused differential diagnosis and guide further diagnostic evaluation. In some cases, HRCT may be diagnostic of a single disease.

The craniocaudal distribution of nodules is helpful in the differential diagnosis of nodular lung disease (Table 3.1). Certain diseases, such as sarcoidosis and other granulomatous diseases, tend to predominate in the upper lobes (Fig. 3.1A–C), whereas others, such as hematogenous metastases, tend to be lower lobe predominant (Fig. 3.2A, B). However, on its own, the craniocaudal distribution of nodules is insufficient for diagnosis and should be used in combination with other findings. There is overlap between the distributions of different diseases and variability among patients with the same disease.

APPEARANCE AND ATTENUATION OF NODULES

The appearance of nodules may help to determine whether they are interstitial or alveolar (airspace) in origin (Table 3.2, Fig. 3.3A, B). Interstitial nodules commonly have well-defined borders and are of soft tissue attenuation. Hematogenous metastases are a good example; even small nodules in patients with metastases tend to be sharply marginated. Alveolar (or airspace) nodules typically have ill-defined borders. For instance, endobronchial spread of infection (bronchopneumonia) results from airway infection, and as the infection spreads outward to involve the adjacent alveoli, the leading edge of the resulting nodular opacity will be indistinct because of heterogeneous alveolar involvement. Alveolar nodules may be of soft tissue attenuation or of ground glass opacity (GGO). Soft tissue airspace nodules are typical of bacterial infection, while GGO nodules may be due to atypical infections or inflammatory disease. 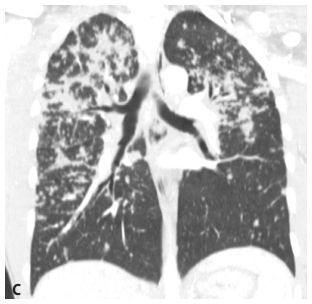 Using the appearance of nodules to determine their differential diagnosis, without considering other findings, is of limited accuracy; there are many exceptions to the rule. For instance, hypersensitivity pneumonitis (HP) is predominantly an interstitial lung disease (ILD), but is characterized by very indistinct nodules. Also, many diseases have both interstitial and alveolar components. 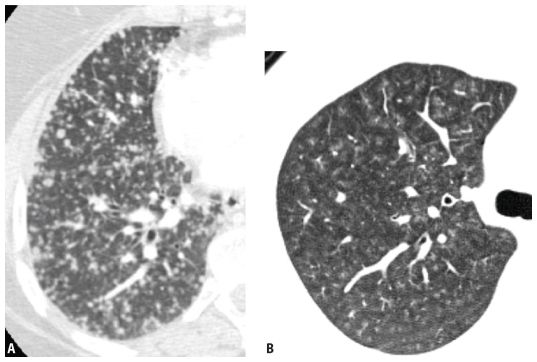 The preferred method by which to evaluate diffuse nodular lung disease on HRCT is to determine the specific distribution of nodules with respect to lung structures. This approach allows a limited differential diagnosis and also gives some insight into the pathophysiology of disease spread. When used in conjunction with clinical information, the craniocaudal distribution of nodules, and their appearance, it may be diagnostic of a single disease. When it is not diagnostic, HRCT can be helpful in guiding further tests.

There are three specific distributions of small nodules that can be distinguished on HRCT: (a) perilymphatic; (b) random; and (c) centrilobular. Recognizing one of these three distributions is fundamental to HRCT interpretation in patients with nodular lung disease. HRCT is 90% to 95% accurate in determining the pattern present and the correct differential diagnosis.

Diseases with a perilymphatic distribution of nodules are characterized by involvement of, or spread through, pulmonary lymphatics. For example, sarcoidosis is characterized by clusters of granulomas occurring in relation to lymphatics. Also, silicosis and coal worker’s pneumoconiosis (CWP) result from inhalation of dusts, which are cleared via lymphatic channels.

Peribronchovascular nodules are seen adjacent to large bronchi and vessels in the central lung regions (Fig. 3.4A, green nodules). They can give the walls of bronchi and arteries a nodular appearance, or clusters of nodules may be seen. Subpleural nodules, or clusters of nodules forming “plaques” or masses, are seen immediately beneath the pleural surfaces and adjacent to the interlobar fissures (Fig. 3.4A, yellow nodules). Interlobular septal nodules give the septa a “beaded” appearance (Fig. 3.4A, red nodules). Centrilobular peribronchovascular nodules are seen in relation to small airways and vessels in the centers of pulmonary lobules. They give the centrilobular artery a knobby or beaded appearance or result in a centrilobular cluster of small nodules (Fig. 3.4A, blue nodules). Each of these regions need not be involved, or need not be involved to a similar degree, in patients having a perilymphatic pattern. At the level of individual pulmonary lobules, perilymphatic diseases may show centrilobular and interlobular septal nodules.

The most common diseases that result in a perilymphatic distribution of nodules are (a) sarcoidosis (Figs. 3.4B, C and 3.5A–D), (b) lymphangitic spread of neoplasm, and (c) several pneumoconioses, such as silicosis, CWP, berylliosis, talcosis, and rare earth pneumoconiosis (Table 3.3). Rare causes include lymphoid interstitial pneumonia (LIP) and amyloidosis.

There is some variation in the specific distribution of nodules, and the predominant regions involved, among the different diseases associated with this pattern and in different patients with the same disease. These variations are discussed below. 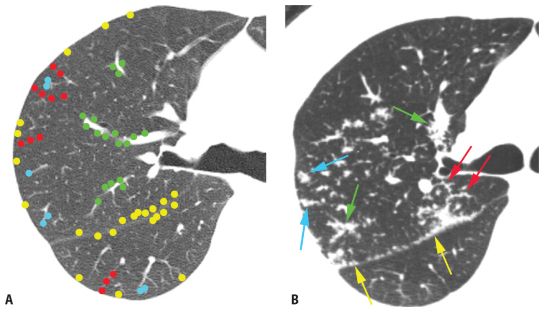 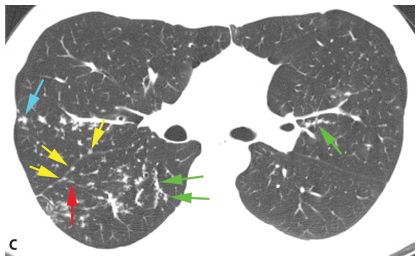 Perilymphatic nodules. A. In a perilymphatic pattern, the nodules predominate in relation to the peribronchovascular interstitium (green dots), subpleural interstitium (yellow dots), centrilobular regions (blue dots), and interlobular septa (red dots). In patients with a perilymphatic pattern, the distribution of nodules is often patchy. The specific distribution of perilymphatic nodules varies in different diseases and in different patients. B and C. Perilymphatic nodules in two patients with sarcoidosis. As in (A), nodules are seen involving peribronchovascular (green arrows), subpleural (yellow arrows), centrilobular (blue arrows), and interlobular septal (red arrows) interstitium. The overall appearance is that of patchy lung involvement, with some lung regions appearing abnormal and some appearing normal.

HRCT findings, considered in conjunction with clinical information, may help distinguish among the several causes of perilymphatic nodules.

Sarcoidosis is, by far, the most common disease in this category (see Chapter 12). On HRCT, nodules tend to predominate in the parahilar peribronchovascular and subpleural regions (Figs. 3.4B, C and 3.5A–D). Individual nodules are usually sharply marginated and of soft tissue attenuation and are easily seen when only a few millimeters in diameter. Peribronchovascular nodules may be few in number or numerous and confluent. HRCT may show a few peribronchovascular nodules, clusters of nodules, or large parahilar masses made up of multiple confluent nodules (Fig. 3.5C). Air-filled bronchi (air bronchograms) may be visible within large masses. Individual small nodules are usually visible adjacent to large masses; these are termed satellite nodules, and the appearance of a large mass with satellite nodules has been termed the galaxy sign of sarcoidosis (Fig. 3.5C). Subpleural nodules are also common in the lung periphery or adjacent to fissures. They may be seen as individual nodules or as clusters or subpleural plaques or masses. 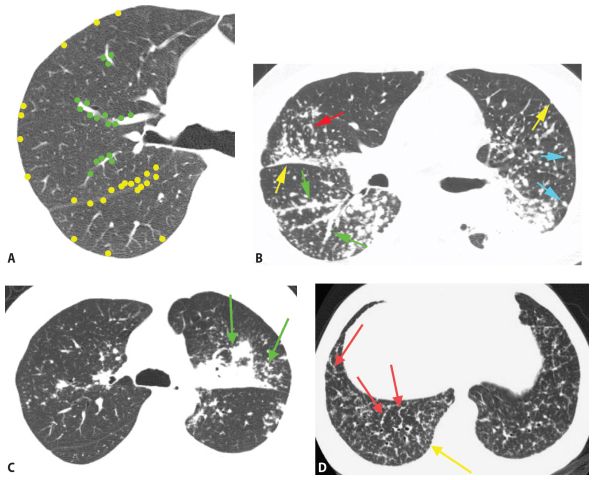 Perilymphatic nodules in sarcoidosis. A. A typical perilymphatic distribution in sarcoidosis. In sarcoidosis, nodules typically predominate in relation to the peribronchovascular interstitium (green dots) and the subpleural interstitium (yellow dots), but centrilobular and septal nodules may also be seen. B. A classic perilymphatic pattern in a patient with sarcoidosis shows patchy, clustered nodules that predominate in relation to the central bronchovascular bundles (green arrows) and subpleural regions (yellow arrows). Note that some centrilobular peribronchovascular nodules (blue arrows) and septal nodules (red arrow) are also present. Conglomeration of nodules is visible in the left lung. C. CT “galaxy sign” in sarcoidosis. In a different patient, HRCT shows a parahilar mass-like conglomerate of confluent nodules in the left upper lobe. The mass reflects profuse peribronchovascular nodules. Smaller “satellite” nodules are visible at the periphery (arrows) of the confluent mass. This appearance is most common in the parahilar regions and has been termed the “galaxy sign.” The galaxy sign may be seen in other diseases, such as silicosis and talcosis. Asymmetry, as seen in this case, may be seen in sarcoidosis. D. Interlobular septal nodules in sarcoidosis. A patient with sarcoidosis shows numerous nodules in relation to interlobular septa (yellow arrow). Numerous subpleural nodules (red arrows) are also present.

Interlobular sepal nodules and centrilobular peribronchovascular nodules are less common (Fig. 3.5B, D), but occasionally are a predominant feature (Fig. 3.5D). Mediastinal and hilar lymph node enlargement may be associated, but need not be present to suggest the diagnosis.

Sarcoidosis typically shows an upper lobe predominance of nodules, but this is not always the case. Bilateral abnormalities are typical, but asymmetry is common.

Sarcoidosis is more frequently seen in younger patients than the other causes of perilymphatic nodules. Often, patients with extensive nodules are relatively asymptomatic, so there may be a discrepancy between the HRCT appearance and the severity of the patient’s symptoms. There is a geographic variability in the incidence of sarcoidosis; sarcoidosis is much less common in countries close to the equator and in Asia than in the United States.

On HRCT, lymphangitic spread of neoplasm, either carcinoma or lymphoma, most frequently results in smooth thickening of the interstitium, including the interlobular septa, peribronchovascular interstitium, and the subpleural interstitium (see Chapter 17). When nodules are present, which occurs in a minority of cases, they also tend to predominate in relation to the interlobular septa (Fig. 3.6A–E), the parahilar peribronchovascular interstitium, and the subpleural regions. A combination of smooth interstitial thickening and nodules may be seen; this appearance is not common in sarcoidosis. Mediastinal and hilar lymph node enlargement may be associated. Pleural effusion, rare in sarcoidosis, may be seen.

In lymphangitic spread of neoplasm, nodules are sharply marginated and of soft tissue attenuation. The overall distribution is variable. An upper or lower lobe predominance may be present, and nodules may be unilateral or bilateral.

History is important in suggesting silicosis or CWP in a patient with nodules (see Chapter 16). Patients with silicosis or CWP have a significant history of long-term exposure in professions such as mining, quarrying, stone cutting, or sand blasting. On HRCT, silicosis and CWP have a similar appearance despite the fact that different dusts are involved, and the histology is different.

Silicosis and CWP are frequently associated with centrilobular nodules (reflecting deposition of dust and fibrosis around small airways and involving lymphatics) and interlobular septal or subpleural nodules because of lymphatic clearance of the dust (Fig. 3.7A, B). Centrilobular nodules are more frequent in these pneumoconioses than with the other causes of perilymphatic nodules.

Large masses in the parahilar regions may be seen, usually representing central conglomerations of nodules in CWP or masses made up of confluent nodules and fibrosis (progressive massive fibrosis) in silicosis (Fig. 3.7B). As these masses develop, the number of lung nodules often appears to decrease. Satellite nodules are common, and areas of emphysema may be seen in the peripheral lung.

A distinct upper lobe predominance is typical in both silicosis and CWP, and nodules are often most numerous in the posterior lung. Abnormalities are usually symmetrical. Nodules are usually a few millimeters in diameter, of soft tissue attenuation, and more sharply marginated in silicosis than in CWP.

LIP should be considered in patients with connective tissue disease or immunosuppression (e.g., human immunodeficiency virus and common variable immunodeficiency) (see Chapter 18). Subpleural and septal nodules are most typical. 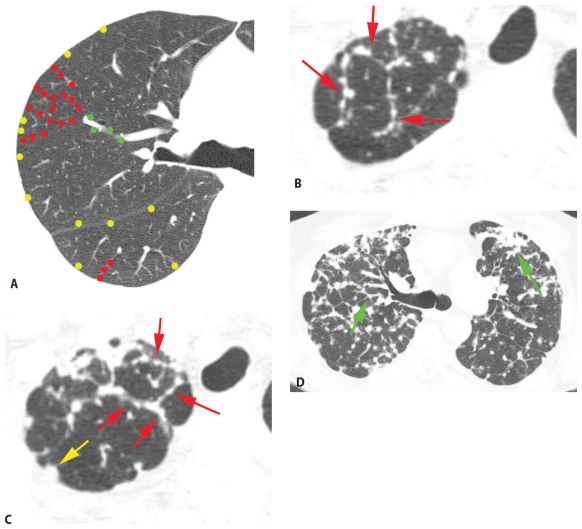 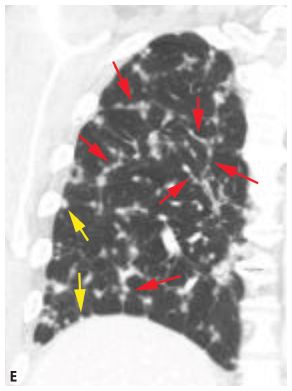