Infection is a common cause of lung disease in both immunocompromised patients and those with a normal immune status. This chapter focuses on a general approach to suspected infection, the role of HRCT, and typical HRCT findings and provides a discussion of different patterns of infection based upon the type of organism.

ROLE OF HRCT IN INFECTION

HRCT has several uses in patients with suspected infection. These include the detection of abnormalities, differentiating infections from noninfectious lung disease, and determining the most likely organism or organisms to be involved.

HRCT is highly sensitive in the detection of pulmonary infections. With the exception of viral infections that only affect the upper airways, the majority of infections show abnormalities easily detected using HRCT. Detection of disease is particularly important in patients with immune deficiencies in which significant pulmonary infection may be present with minimal or absent symptoms or in the presence of a normal chest radiograph.

Understanding the common HRCT findings of infection, and their specificity, is important in the interpretation of HRCT. It is also important to be aware of noninfectious causes of lung abnormalities that may mimic infection. As infection is common, it is often assumed to be a cause of lung abnormalities in the acute setting, but this is not always the case. Abnormalities such as pulmonary edema, diffuse alveolar damage, and pulmonary hemorrhage may present with symptoms similar to infection. Additionally, certain inflammatory, noninfectious diffuse lung diseases may present with acute symptoms such as hypersensitivity pneumonitis, organizing pneumonia, and acute eosinophilic pneumonia.

Determining the Most Likely Organism(s)

Once infection is determined to be a likely cause of lung abnormalities, the most likely offending organism(s) should be considered. This determination is fundamentally based on the recognition of specific HRCT findings. It is important to keep in mind that there may be significant overlap between HRCT patterns resulting from different infections or more than one organism may be responsible for abnormalities; a differential diagnosis is almost always required in interpreting HRCT in patients with suspected infection.

For example, a single focal region of consolidation in a patient with HIV infection or AIDS is more likely a common bacterial infection than P. jiroveci infection. This has important implications in terms of diagnostic evaluation and treatment.

Knowledge of the patient’s immune status plays a major role in determining the most likely infectious cause of HRCT abnormalities.

Infections in immunocompromised patients vary depending upon the type of immune suppression. For instance, patients with human immunodeficiency virus infection are predisposed to infection by specific organisms, which are rarely seen in immunocompetent hosts, such as Cryptococcus, P. jiroveci, and Cytomegalovirus. Neutropenic hosts have a different group of organisms to which they are predisposed, including Candida, Aspergillus, mucormycosis, and Escherichia coli.

Certain infections show significant geographic or regional variability based upon environmental differences. For instance, coccidioidomycosis is a relatively common infection in the southwest United States, but is only rarely encountered in the Midwest and eastern states. Histoplasmosis and blastomycosis have other geographic distributions. Parasitic infections are more commonly encountered in underdeveloped or tropical countries.

In a patient with acute symptoms, infection is almost always considered as a cause of HRCT abnormalities. In a patient with chronic symptoms, infection is less likely, although certain infections, such as atypical mycobacterial and fungal organisms, may have a chronic course, as do diseases with a predisposition to chronic infection, such as cystic fibrosis or immune deficiency. The HRCT findings present will determine the likelihood of infection as the etiology.

When patchy, focal, or asymmetrical abnormalities are present, bacterial, fungal, and mycobacterial infections are the primary considerations. These most commonly present with consolidation as the predominant abnormality.

Ground glass opacity and consolidation are nonspecific findings and in the acute setting may be seen with infection, aspiration, pulmonary edema, diffuse alveolar damage, and hemorrhage. 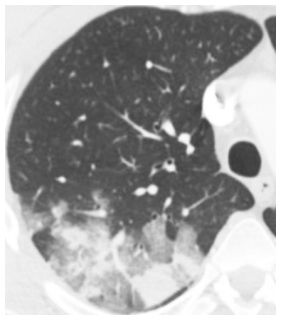 In the acute setting, centrilobular nodules of soft tissue attenuation (Fig. 14.2) are likely due to infection. Endobronchial spread of bacterial, mycobacterial, or fungal organisms is the most common cause. This appearance represents an early manifestation of bronchopneumonia.

Aspiration is also a consideration when findings are in dependent lung regions. Occasionally vascular diseases, such as pulmonary edema or hemorrhage, may present with centrilobular nodules of soft tissue attenuation. A vascular etiology should be considered when the abnormalities are diffuse or bilateral and symmetric. In the chronic setting, chronic or recurrent infection/aspiration and invasive mucinous adenocarcinoma are the most common causes of centrilobular nodules of soft tissue attenuation.

In a patient with acute symptoms, infection is one of several causes of centrilobular nodules of ground glass opacity (Fig. 14.3). It is most characteristic of infections that produce peribronchiolar inflammation without bronchiolar impaction, such as viral and atypical bacterial infections such as Chlamydia and M. pneumoniae. 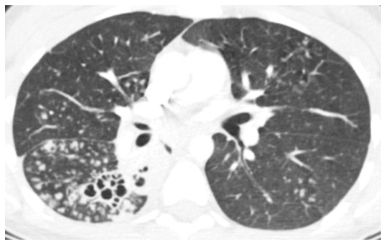 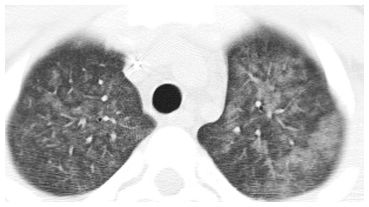 In patients with chronic symptoms, TIB is also commonly due to infection. This may be due to chronic or recurrent acute infections. A common cause of chronic infection with TIB is atypical mycobacteria. Bronchiectasis of any cause, cystic fibrosis, immunodeficiency, primary ciliary dyskinesia, allergic bronchopulmonary aspergillosis, and disorders of the bronchial cartilage may also lead to chronic infection with TIB, but these also show prominent involvement of the large airways. 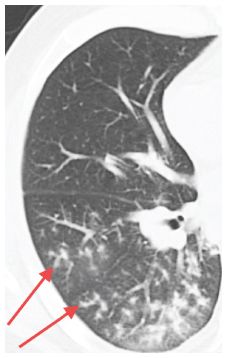 Tree-in-bud. Branching tubular opacity with associated nodules (arrows) is seen in the peripheral regions of the right lower lobe in a patient with bacterial bronchopneumonia. The tree-in-bud sign is highly suggestive of infection and the diagnosis can often be made by sputum analysis.

Panbronchiolitis is predominantly a small airways disease that presents with chronic TIB; it is uncommon. In the appropriate clinical setting, noninfectious causes of TIB to consider include invasive mucinous adenocarcinoma, follicular bronchiolitis, talcosis, and intravascular metastases.

Large airway infection, associated with bronchial wall thickening and sometimes luminal impaction (Fig. 14.5A, B), in a patient with suspected infection is often associated with other abnormalities, such as centrilobular nodules, consolidation, or TIB (see Chapter 6). It is occasionally seen as an isolated finding, in which case atypical organisms (viral, Chlamydia, M. pneumoniae) are the most likely etiologies.

Other common etiologies of isolated airway thickening and impaction include asthma and acute or chronic bronchitis. This finding should be distinguished from thickening of the peribronchovascular interstitium that may be seen with pulmonary edema and lymphangitic spread of tumor. 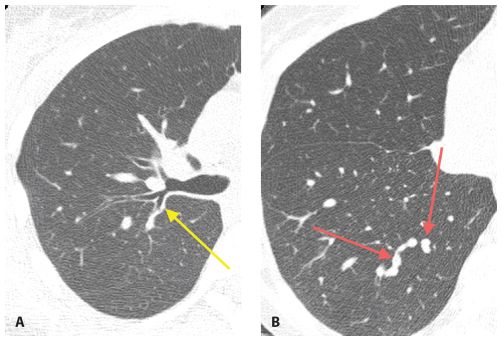 Airway inflammation. A and B. Airway wall thickening (arrow, A) and impaction (arrows, B) may be the only signs of infection. In isolation, this is most typical of viral infection, such as in this patient with rhinovirus infection.

Noninfectious causes of large nodules and cavities include malignancy, vasculitis such as Wegener’s granulomatosis, and rare disorders such as tracheobronchial papillomatosis. Clinical history is important in distinguishing infectious versus noninfectious causes of this pattern. The thickness of the cavity wall may also be helpful in making this distinction. A wall thickness less than 5 mm suggests a benign process, whereas a wall thickness greater than 15 mm suggests a malignancy (Fig. 14.7A, B). A wall thickness between 5 and 15 mm is not helpful in predicting the likelihood of a benign versus malignant process. 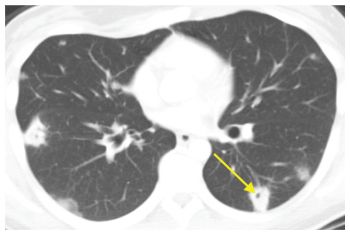 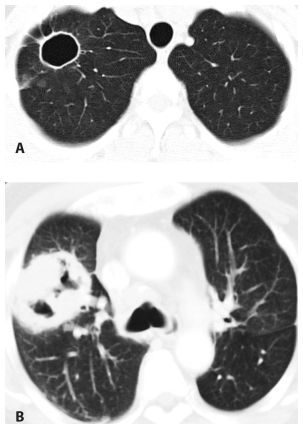 Bacterial infections are common and, in general, should be considered the most likely infectious cause of most HRCT abnormalities. They may be hospital or community acquired. The most common hospital-acquired organisms include Staphylococcus aureus, Pseudomonas aeruginosa, E. coli, Acinetobacter, Klebsiella, and Haemophilus influenzae. The most common community-acquired organisms include Streptococcus pneumoniae, H. influenzae, S. aureus, and gram-negative organisms. Atypical bacterial infections such as Chlamydia and M. pneumoniae are also common bacterial infections acquired in the community, but have unique imaging features. These will be discussed later in conjunction with viral organisms and P. jiroveci, as these organisms all share many features. 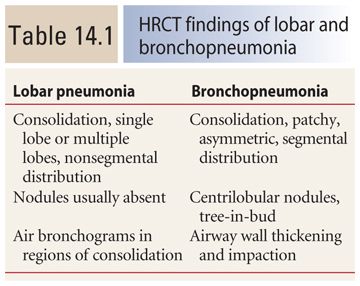 In lobar pneumonia, the infection originates in, and is predominantly centered in, the alveolar spaces. Spread to adjacent alveoli occurs through the pores of Kohn, small interalveolar pores, and the canals of Lambert. Associated spread via the airways is typically absent. The infection is limited by fissures.

This pattern is most typical of Streptococcus, H. influenzae, Klebsiella, and Moraxella catarrhalis. The HRCT findings (Fig. 14.8) include the following:

The differential diagnosis of lobar pneumonia includes mycobacterial and fungal infections, both of which can produce an isolated region of consolidation. An upper lobe distribution might suggest one of these, but this is not a constant feature.

The defining feature of this pattern is endobronchial spread of infection. The infection is centered within airways and is often associated with airway impaction. The process spreads outward from the centrilobular bronchiole, forming a centrilobular nodule, and may continue to spread until the entire pulmonary lobule is involved. Adjacent involved lobules may coalesce to form confluent areas of consolidation. This pattern is typical of S. aureus, P. aeruginosa, Klebsiella, and E. coli. The HRCT findings (Fig. 14.9A, B) of this type of spread include the following: 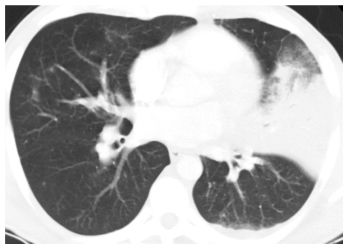 Lobar pneumonia. HRCT shows consolidation in the lingula of a patient with Streptococcus pneumoniae infection. Note that the consolidation is limited by the major fissure. Only minimal abnormality is seen elsewhere. Nodules and tree-in-bud are not a feature of this pattern. This is typical of infections centered within the alveolar spaces.