Hypersensitivity pneumonitis (HP) represents an immune reaction to inhaled organic antigens. The possible sources of these antigens are diverse and include microbes, animals, plant material, and various chemicals.

There are three possible presentations of HP: acute, subacute, and chronic. Acute HP is rare and involves a large antigen exposure leading to the rapid onset of cough, dyspnea, and fever. Exposure to moldy hay in farmer’s lung is the most typical example of acute HP. Subacute HP is common and demonstrates symptoms that are similar to, but less severe than acute HP. Exposures leading to the development of symptoms are more prolonged, extending over weeks to months. Chronic HP is also common and involves long-term exposure to low levels of antigen over a period of years.

There are striking differences in the prevalence of HP based upon antigen exposure. For instance, up to 15% of pigeon breeders will develop HP. Of note, however, only 50% of patients with HP will have an identifiable exposure. This is one of the major challenges in the diagnosis of HP as most other inhaled diseases, such as pneumoconioses, have an easily identifiable exposure. Smoking is thought to be relatively protective against the development of HP, but it does not preclude this diagnosis.

The HRCT findings of HP vary depending upon the clinical presentation.

The findings of acute HP have not been well studied, as most patients are not imaged in this stage. The HRCT findings are likely similar to subacute HP (discussed below), but may be more extensive (Fig. 13.1) and demonstrate an increased incidence of consolidation.

The diagnosis of subacute HP is usually based on the presence of a combination or constellation of abnormalities, including ground glass opacity (GGO), centrilobular nodules of GGO, mosaic perfusion or air trapping, and the headcheese sign (Table 13.1). 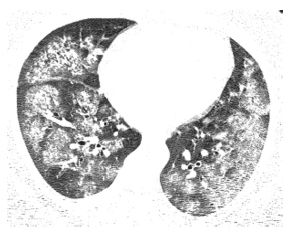 Acute hypersensitivity pneumonitis (HP). Extensive bilateral ground glass opacity is seen in a patient with acute HP secondary to mold exposure. These abnormalities are nonspecific and more severe than that typically present with subacute HP.

GGO in HP is often patchy and bilateral in distribution. It may be seen in isolation, in which case it is a nonspecific finding (Fig. 13.2). Isolated GGO may be seen with a variety of acute diseases (infections, edema, diffuse alveolar damage, and hemorrhage) and chronic diseases (invasive mucinous adenocarcinoma, interstitial pneumonias, organizing pneumonia, eosinophilic pneumonia, lipoid pneumonia, and alveolar proteinosis). When associated with other findings of subacute HP, such as air trapping, the specificity of GGO for a diagnosis of HP increases.

Mosaic perfusion and air trapping may be seen in association with other abnormalities (Figs. 13.3B and 13.4) or may be seen as an isolated abnormality (Fig. 13.5). Mosaic perfusion appears as one or more focal areas of decreased lung attenuation associated with reduced size of vessels within the lucent region (see Chapter 5). It reflects the presence of bronchiolitis and bronchiolar obstruction occurring as a result of bronchiolar inflammation. It may persist after treatment of HP and following resolution of GGO or nodules. When seen as an isolated abnormality, the differential diagnosis includes asthma and constrictive bronchiolitis.

Subacute hypersensitivity pneumonitis (HP) with ground glass opacity in two patients. A and B. Patchy ground glass opacity is a nonspecific finding that may be seen in a variety of disorders. It may be the only manifestation of subacute HP, but more commonly is associated with other findings such as mosaic perfusion and centrilobular nodules.

Subacute hypersensitivity pneumonitis (HP) with centrilobular ground glass opacity nodules in two patients. A and B. HP is the most common cause of diffuse centrilobular nodules of ground glass opacity. In the setting of an appropriate exposure, such as this patient with a chronic mold exposure, the HRCT should be considered diagnostic of that disease. In the absence of an exposure, biopsy is required for diagnosis. In (B) note that the centrilobular nodules are associated with areas of low-attenuation mosaic perfusion.

Subacute hypersensitivity pneumonitis (HP) with isolated mosaic perfusion and air trapping. A. Other than subtle mosaic perfusion, the inspiratory scan appears nearly normal. B. On expiration, air trapping is clearly seen. This appearance may be seen in patients with subacute HP before or after treatment. 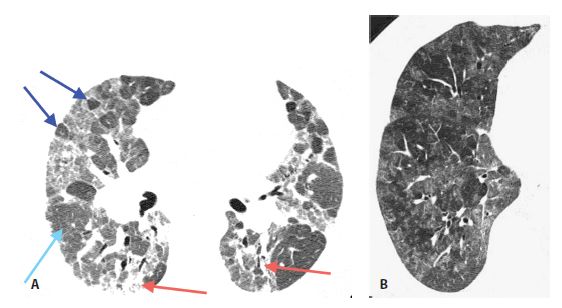 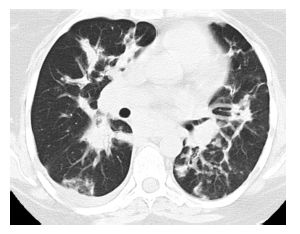 Chronic hypersensitivity pneumonitis (HP), distribution. A and B. In a patient with chronic HP with fibrosis, reticulation and traction bronchiectasis (yellow arrows) involve the entire cross section of the lung, both central and subpleural regions. C. Coronal reformatted image shows the mid-lung predominance typical of HP.