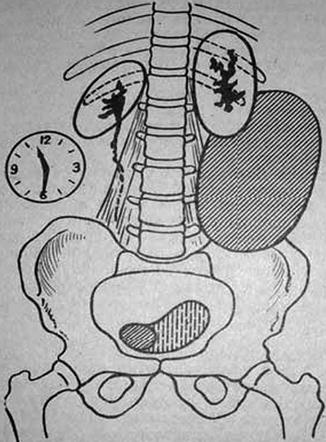 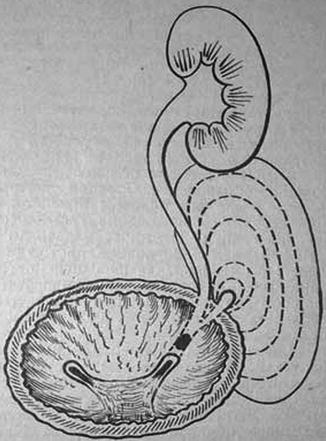 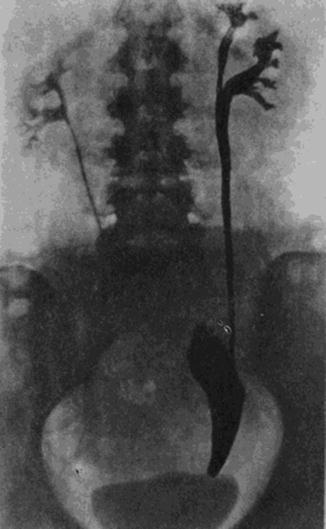 Excretory urogram. Left ureter diverticulum (After Lopatkin and Lyulko [39], Fig. 131, p. 176)
The development of the secondary diverticulum in the part of the left ureter located at the renal pelvis with its congenital valves along with hydronephrosis was described by Kim et al. (2004) (Fig. 2.4). 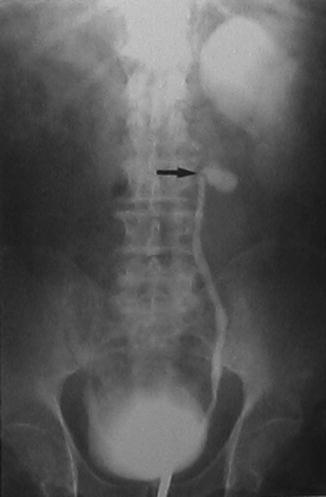 Retrograde ureteropyelogram in case of congenital obstruction of the ureter caused by ureteral valves in a 66-year-old male, namely, compression and constriction of the proximal part of the left ureter caused by valves (shown by the arrow) with a prominent hydronephrosis and formation of a diverticulum in the proximal part of the left ureter (After Kim et al. [52])
Ureteral pseudodiverticula can be considered a special type of ureteral diverticula (Fig. 2.5) or periglandular ureteritis (the term used by several authors) [42]. Ureteral pseudodiverticula (UPD) are most often found in men above 50 years old [43–48]. The actual UPD rate is not known. This is attributed to the impossibility to see UPD during EU. Hematuria is the most frequent manifestation which is followed by urological examination. The examination reveals diverticula and in most cases a concurrent infection and/or obstruction of the urinary tract. 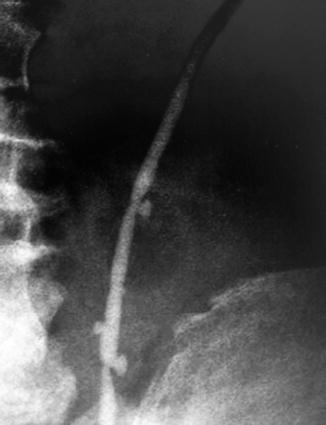 Pseudodiverticula of the left ureter in a retrograde ureterogram in case of ureteral valves (After Kim et al. [52])
As was mentioned above, UD are traditionally divided into two categories: congenital and acquired UD. Congenital (true) diverticula are usually solitary and contain all layers of the normal ureter wall, while the walls of acquired (false) UD consist only of the muscle layer. Histologic examination of multiple UPD reveals that these diverticula do not fall within any of the categories since such “outpouchings” do not consist of the complete ureter wall nor do they prolapse through the muscle layer. Since there is no certainty whether UPD are congenital or acquired, they are probably a metaplastic or hyperplastic reaction of the transitional epithelium which appears due to inflammation and may be part of cystic pyeloureteritis presentation. Actually, the combination of acquired diverticula with a stricture or defect of urinoexcretory system filling more likely means presence of a tumor.
< div class='tao-gold-member'>
Only gold members can continue reading. Log In or Register to continue