Diseases of the Penis with Functional Evaluation

12 Diseases of the Penis with Functional Evaluation

The penis is well-suited for high-resolution ultrasound assessment; it is a superficial soft-tissue organ with no acoustic obstructions in the form of bone or gas. The role of ultrasound in the investigation of penile pathology, especially impotence, is well-established.1 Conditions such as priapism, Peyronie disease, penile mass lesions, and the penile urethra may be usefully assessed by ultrasound. High-resolution gray-scale imaging, at frequencies from 7–13 MHz, alone or in combination with color and spectral Doppler, forms the basis of ultrasound evaluation. The addition of a pharmacological stimulant to produce an erection is established practice for evaluation of vascular causes of erectile dysfunction. This chapter will illustrate the techniques, normal and abnormal findings, and some of the pitfalls of penile ultrasonography with specific emphasis on the investigation of erectile dysfunction.

The penis is comprised of three cylindrical structures of erectile tissue: two dorsal corpora cavernosa and a ventral corpus spongiosum containing the penile urethra. The spongiosum is smaller proximally but expands distally to form the glans penis. The cavernosa are markedly distensible and are filled with sinusoidal tissue, which is essential to the erectile process. A tough, nondistensible fibrous capsule, the tunica albuginea, invests the corpora cavernosa with a much thinner layer covering the corpus spongiosum. The normal arterial supply to the penis is via the internal pudendal artery (a branch of the anterior division of the internal iliac artery), which divides into terminal branches: The dorsal penile artery (supplying the glans penis), the cavernosal artery (supplying the corpora cavernosa), and the bulbar artery (supplying the bulb and the corpus spongiosum). The cavernosal arteries give the main contribution to erectile function but anatomical variations are not uncommon. Emissary veins pierce the tunica albuginea and drain into the deep dorsal vein via the spongiosal, circumflex, and cavernosal veins (Fig. 12.1).2 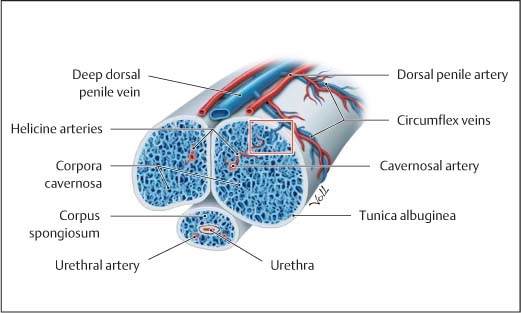 Fig. 12.1 Diagram of the anatomy of the penis 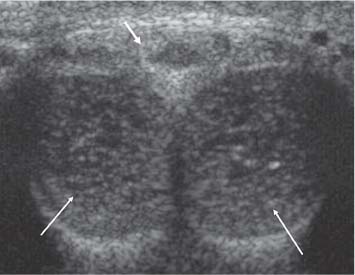 Ultrasound identifies the paired corpora cavernosa, the cavernosal arteries, the tunica albuginea, and the corpus spongiosum. The corpora cavernosa are of uniform low reflectivity and the tunica can be seen as a thin high-reflective envelope (< 2 mm thick) surrounding the corpora. The corpus spongiosum is of slightly higher reflectivity. The reflective walls of the cavernosal arteries are usually clearly identified at the base of the penis and can often be identified as two parallel, high-reflective lines (Fig. 12.2).3 The normal urethra is not identified.

• Venous drainage via the superficial and deep dorsal veins

Erectile dysfunction is a common problem, affecting 20–30 million men in the United States.4 The cause of impotence is multifactorial, but exclusion of an arterial and/or a venous cause is frequently required. Color and spectral Doppler ultrasound is the ideal, minimally-invasive technique for delineation of vascular abnormalities. A trial of sildenafil is often the first diagnostic test in patients likely to have an arteriogenic component to their erectile dysfunction; only nonresponders undergo further evaluation with color and spectral Doppler ultrasound. A reduction in requirements for Doppler ultrasound assessment of erectile dysfunction has resulted as sildenafil also serves as a therapeutic option for responders. There remains, however, a specific subset of usually younger patients in whom venogenic impotence is more likely. These patients form the bulk of current practice with a specific protocol designed to exclude a “false” venous leak in order to avoid the use of cavernosography in the majority of these patients.

Following formal clinical evaluation in an erectile dysfunction (ED) clinic, Doppler ultrasound assessment is conducted in a private setting. An attending urologist with a special interest in ED is ideally present. In general, the urologist undertakes intracavernosal injections, assesses the grade of erection, and counsels the patient regarding the risk of priapism. Several combinations of agents have been used for pharmacological induction of erection, either alone or in combination.5,6 Current practice is to use prostaglandin E1 (PGE1) with or without the addition of intracavernosal phentolamine.

A high-frequency linear “small parts” probe with a small footprint should be used. The penis is held in the anatomical position by the patient and baseline B-mode ultrasound imaging is performed in longitudinal and transverse planes. High-resolution gray-scale imaging should always be performed prior to assessment of vascular status. Important abnormalities include fibrotic plaque disease, focal cavernosal fibrosis or calcification, and tunica disruption. Baseline imaging allows optimum identification of injection sites and location of the cavernosal arteries; anatomical variants are common. Additionally, if baseline imaging is omitted, a spurious diagnosis of calcification/fibrosis of the corpora may be raised following inadvertent intracavernosal injection of air bubbles.

Current practice is to use PGE1 at a dose of 20 μg.7 In the setting of maximal stimulation following this dose of PGE1 there is a risk of priapism with a reported incidence as high as 11%.8 On ultrasound, absence of cavernosal artery flow or a resistive index (RI) > 1.00 (absent diastolic flow) is thought to be highly specific in predicting priapism; if seen during the poststimulation ultrasound examination, either immediate treatment or “in-hospital” observation is recommended.9 However, experience suggests that absence of diastolic flow is a frequent occurrence in the “normal” responder, and is not a sinister finding leading to priapism. The alternative is to use a two-step method of sequential doses of PGE1 10 μg if the response to the first dose is suboptimal, but the examination is significantly shortened with the single-dose method. An expectant “wait and see” approach with patients given direct access to on-site urological opinion if their erection persists for more than four hours is a suggested policy.

The right or left cavernosal artery may be interrogated with ultrasound; the normal diameter ranges from 0.2 to 1.0 mm and a variable increase in dimension is seen following pharmacological stimulation. However, the increase in the baseline diameter following pharmacological stimulation does not correlate with either the measured peak systolic velocity (PSV) or clinical grading of erection and it is not routine to measure arterial diameters.10 It is normal practice to document a baseline angle-corrected PSV of the cavernosal artery selected for interrogation and to sample the same area on subsequent measurements. It has been suggested that spectral Doppler ultrasound analysis of the cavernosal artery in the flaccid penis provides a completely noninvasive method for assessment of arterial impotence.11,12 However, the normal velocity criteria have not been established and no data regarding venous abnormalities can be obtained without pharmacostimulation.12

A customary response to pharmacostimulation allows color Doppler ultrasound depiction of the cavernosal arteries and the helicine branches (Fig. 12.3). Decreasing reflectivity of the corpora cavernosa from the periarterial region outward is seen as sinusoidal dilatation progresses (Fig. 12.4). Power, color, and spectral Doppler ultrasound all yield useful information regarding vascular anomalies and normal variants. Abnormal venous flow may also be directly visualized but cannot be measured objectively. 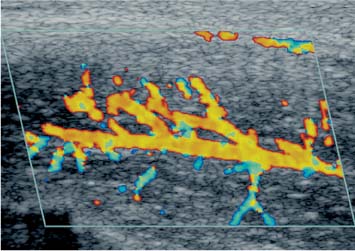 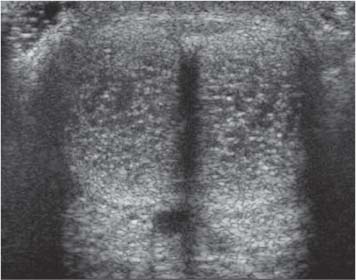 Following the pharmacological induction of an erection, dynamic assessment of the spectral Doppler waveform is performed. Color mapping of the vessels allows accurate spectral assessment by enabling consistent Doppler gate placement and angle correction.13 Variations in the vascular supply are common8,14 and include duplication of the cavernosal artery and cross communications between left and right cavernosal arteries (Fig. 12.5). If there is definite asymmetry, this should be documented and both arteries sampled during the course of the assessment. Additionally, color Doppler ultrasound allows visual recognition of high-velocity “jets” and damped pulsatility secondary to a proximal arterial stenosis, allowing specific interrogation with accurate spectral gate placement. 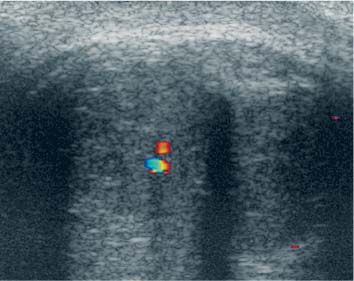 Fig. 12.5 Transverse ventral image of the poststimulation penis, demonstrating the paired corpora cavernosa with two arteries present on the right

The cavernosal artery should be sampled at the base of the penis (Fig. 12.6). At this site, more consistent velocity readings are obtained, it is possible to achieve the optimal angle of insonation and the effect of distal arterial variants is reduced.13 The PSV and end diastolic velocity (EDV) are assessed every five minutes after the administration of PGE115 and the clinical response documented every 15 minutes according to an accepted grading system.16 Self-stimulation has been advocated as an adjunct to pharmacological stimulation in order to obtain a maximal response.17

Following pharmacostimulation there is a variable temporal response. A characteristic sequence of changes in the spectral Doppler waveform, with increasing penile rigidity, has been described. There is increased systolic and diastolic flow early in tumescence. Diastolic flow then decreases and there is eventually minimal or reversed diastolic flow as veno-occlusion and maximal rigidity occur.18 Forward systolic flow often decreases at full rigidity prior to the detumescent phase when diastolic flow returns. Assessment over 30 minutes is occasionally required to ensure that the maximal effect has been attained, although 20 minutes is normally sufficient.19 The accepted “normal” lower limits for the PSV range from 25 to 35 cm/s. A PSV of 35 cm/s or greater indicates definite arterial sufficiency following adequate pharmacological stimulation (Fig. 12.7), whereas a PSV < 25 cm/s is diagnostic of arterial insufficiency as the cause of ED (Fig. 12.8). Intermediate values are not specific and in this group sildenafil is often used as some will have mild to moderate arterial insufficiency and may benefit.20 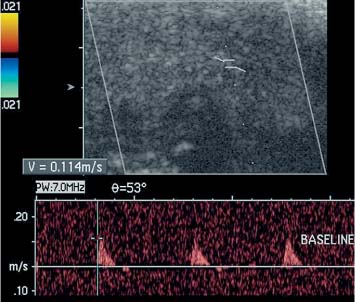 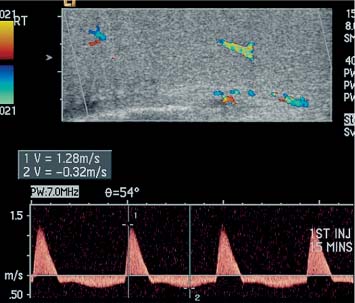 Fig. 12.7 Normal response demonstrated on spectral Doppler ultrasound 15 minutes after administration of 10 μg of PGE1. The PSV is 128 cm/s and the EDV is –32 cm/s, accompanied by full tumescence. The patient has an intact arteriovenous mechanism and another cause for ED should be sought

There is continuing debate about the utility of color Doppler ultrasound in the diagnosis of venogenic impotence.21,22 Cavernosography with cavernosometry remains the diagnostic reference standard, as this technique measures outflow resistance without the need for adequate arterial inflow.23 The advantage of ultrasound lies in the minimally-invasive nature of the procedure and the ability to screen patients to identify a normal erectile response. Following a positive color Doppler ultrasound for a venous leak, cavernosography is generally still required for anatomical delineation of the draining veins if surgical or endovascular therapy is being contemplated.24,25

Tags: Ultrasound of the Urogenital System
Jan 14, 2016 | Posted by admin in GENITOURINARY IMAGING | Comments Off on Diseases of the Penis with Functional Evaluation
Premium Wordpress Themes by UFO Themes
WordPress theme by UFO themes