The introduction of drug-eluting beads represents a shift in the principal way in which chemotherapeutic agents are delivered, concentrated, and maintained within tumor during transarterial chemoembolization. Rather than using particles and/or Ethiodol to occlude the arterial flow in an attempt to keep the chemotherapy in the neoplasm, the particle (the bead) itself is the carrier of the chemotherapeutic agent. Once the particle is trapped within the neoplasm, it serves as the depot, allowing for sustained release of the drug with reduced systemic drug concentrations. This also reduces associated side effects while sustaining high chemotherapeutic concentrations within tumor. The concept of drug delivery through microparticles using various nondegradable and degradable synthetic polymers (such as polyglycolic acid, polyhydroxybutyrate, or ethylene vinyl acetate) or natural materials (albumin, gelatin, chitosan, or alginate) for carrying drugs such as doxorubicin, mitomycin C, cisplatin, methotrexate, and paclitaxel was described as early as 1983.1 However, commercially available drug-capable beads were not developed until 2004.2

Currently, there are three commercially available drug-eluting beads. These are U.S. Food and Drug Administration (FDA) approved for the treatment of hypervascular tumors and arteriovenous malformations. The drug-loading feature is not yet FDA-approved. However, all these beads carry CE mark approval status for drug loading in Europe. These include LC Beads (DC Beads in Europe) manufactured by Biocompatibles UK, Ltd. (Farnham, Surrey, United Kingdom), QuadraSphere (HepaSphere in Europe) manufactured by Merit Medical Systems, Inc. (South Jordan, Utah), and Oncozene beads (Embozene Tandem in Europe) manufactured by CeloNova BioSciences, Inc. (San Antonio, Texas). Although the drug loading and drug elution of these beads are based on ion exchange mechanism, the differing physical and chemical properties of the beads lead to variable drug-loading and drug-eluting characteristics, embolic effect, and intratumoral distribution.

LC beads (LC = low compression), also known as DC beads in Europe (DC = drug capable), are biocompatible, hydrophilic, nonresorbable, deformable polyvinyl alcohol acrylic polymer hydrogel microspheres produced by inverse polymerization with 2-acrylamido-2-methylpropane sulfonate.3 The negatively charged sulfonate groups allow interaction with positively charged drugs such as doxorubicin and irinotecan, which bind reversibly by an ion exchange mechanism, allowing for a high loading efficiency. The beads are available in various sizes ranging from 100 to 900 µm (100 to 300 µm, 300 to 500 µm, 700 to 900 µm). They are distributed in a 2-mL aliquot and delivered in a 10-mL vial. There are approximately 200,000 beads per vial of 100- to 300-µm beads; 38,000 beads per vial of 300- to 500-µm beads; and 10,000 beads per vial of 500- to 700-µm beads. Recently, smaller 70- to 150-µm beads known as the LC BeadM1 are marketed for more distal intratumoral penetration. There are approximately 1,300,000 beads in a 2-mL aliquot of LC BeadM1.

The time required to load the LC beads with doxorubicin depends on the size of the beads (which affects the available surface area of the beads for drug loading), drug concentration within the medium, and absence of any other positively charged particles in the medium. Smaller diameter beads load quickly. When loading 25 mg of doxorubicin per 1 mL of beads, greater than 99% is loaded on to the 100- to 300-µm beads in less than 10 minutes, whereas it requires closer to 2 hours to completely load the 700- to 900-µm beads to the same concentration. No significant difference in maximum loading capacity is seen for LC beads of sizes between 100 and 900 µm, with an average maximum loading capacity of 39 mg doxorubicin per milliliter observed.4 The loading characteristics of irinotecan parallel those of doxorubicin. At 2 hours, 100- to 300-µm beads load 98.1% of 50 mg/mL of irinotecan, whereas 700- to 900-µm beads load 93.5% of the drug. The maximum loading capacity is 50 mg of irinotecan per 1 mL of beads, irrespective of the size of the beads.5

Drug loading leads to loss of water in the hydrogel and results in a decrease in the diameter of the bead (an average of 35% diameter reduction of the beads with doxorubicin and 20% to 40% decrease with irinotecan) and reduction in the compressibility of the bead.5,6 These physical changes do not affect delivery of the beads through microcatheters of appropriate size (2.4-Fr for 100 to 500 µm, 2.7-Fr for 500 to 700 µm, and 3-Fr for 700 to 900 µm). The manufacturer does not recommend mixing LC beads with Lipiodol.

The elution of chemotherapeutic drugs from LC beads appears to be a function of bead size (smaller beads elute faster) and ionic strength and composition of elution media (no drug elution in pure water but increasing rates of elution with increasing concentration of ionic solution) and is influenced by drug–bead interactions (irinotecan elutes faster than doxorubicin due to weak ionic bond) and drug–drug interactions.7 Rapid elution of irinotecan (burst) from LC beads of up to 10% has been observed with mixing of the beads with certain contrast materials.8 Therefore, premixing contrast material with the beads during preparation in the pharmacy has been discouraged.8

Preclinical and clinical studies have shown elevated and sustained retention of doxorubicin within the tumor after chemoembolization with drug-eluting beads and decreased systemic doxorubicin plasma levels (both peak drug concentration and area under the curve) compared to conventional chemoembolization.9,10 The location of vascular occlusion appears to parallel the size of the beads: 100- to 300-µm beads block vessels with a mean diameter of 237-µm penetrating tumor at a mean distance of 3.8 mm. Explanted livers following chemoembolization with drug-eluting beads demonstrated 42% of the beads occluding intratumoral vessels. Sustained cytotoxic levels of drug at the vascular occlusion sites were observed for at least 1 month. Tumor necrosis was associated with deeper penetration of the beads and higher concentration of the drug.11

QuadraSpheres are polyvinyl alcohol–acrylic acid superabsorbent copolymer beads, which swell up to 64 times their dry volume when hydrated. The microspheres are shipped dehydrated and are available in 30 to 60 µm, 50 to 100 µm, 100 to 150 µm, and 150 to 200 µm dry diameter corresponding to 120 to 240 µm, 200 to 400 µm, 400 to 600 µm, and 600 to 800 µm hydrated diameters, respectively. Each 10-mL glass vial contains 25 mg of dry spheres corresponding to 815,000; 139,000; 28,100; and 9,400 spheres per vial, respectively. Up to 75 mg doxorubicin can be loaded into each vial of QuadraSpheres with a 60-minute loading time when loading with reconstituted powdered doxorubicin and a 120-minute loading time when loading with presolubilized doxorubicin. QuadraSpheres demonstrate a 10% diameter reduction when loaded with doxorubicin and less homogenous loading with both doxorubicin and irinotecan when compared to LC beads and show comparable doxorubicin release kinetics to LC beads in vitro. A 7-minute burst release of nearly 75% of bound irinotecan from the spheres is reported due to weaker drug–bead interaction. When loaded with doxorubicin, HepaSpheres become more fragile and prone to fracturing.12

Oncozene beads are biocompatible, nonresorbable hydrogel microspheres, which are coated with an inorganic polyphosphazene polymer (Polyzene-F). These tightly calibrated beads are available in 40 ± 10-µm, 75 ± 15-µm, and 100 ± 25-µm diameter sizes and are supplied in 2- or 3-mL aliquots. The anionic sodium methacrylate backbone of the microsphere structure provides a site for loading of the positively charged doxorubicin or irinotecan molecule. Each milliliter of Oncozene beads can load 50 mg of doxorubicin or irinotecan and can be loaded in 60 minutes when loading with powdered doxorubicin and in 30 minutes when loading with irinotecan solution (20 mg/mL) with a 98% loading efficiency. When loaded with drug, Oncozene beads shrink in diameter by less than 5%. Both doxorubicin and irinotecan elute more slowly from Oncozene beads when compared to DC bead in vitro, which may further mitigate side effects of systemic drug exposure, especially with irinotecan, although further investigation is warranted.13

To maximize loading of the chemotherapeutic drug onto the carrier bead, the corresponding manufacturer’s guidelines (“instructions for use”) must be followed. In general, a total of 25 mg of doxorubicin per milliliter of beads or 50 mg of irinotecan per milliliter of beads is loaded irrespective of the type of carrier bead, given the common indications for their use.

When loading LC beads with powdered doxorubicin, a 50-mg vial of doxorubicin is reconstituted with 2 mL of sterile water. After removing saline from the LC bead vial, the 2 mL of reconstituted doxorubicin is then added to the LC bead vial and the vial is occasionally agitated to encourage mixing. Loading time is up to 120 minutes for the largest LC bead size. When loading LC bead with irinotecan, solution (20 mg/mL) only should be used. After removing as much saline as possible from the LC bead vial, 5 mL of irinotecan solution is added to the vial and the vial is gently agitated to encourage mixing. A minimum 2-hour loading time is required for all bead sizes.

Drug-eluting beads are routinely mixed with nonionic contrast material (10 to 20 mL per 1 mL of beads) for visualization of delivery of the beads to determine bead distribution and to monitor for change in flow dynamics as distal arterioles become occluded. There is no consensus on the end point of embolization. Some operators advocate complete stasis of tumor-feeding vessels (while preserving segmental and lobar arterial flow) during chemoembolization with drug-eluting beads (and supplementing with bland embolization to achieve stasis if drug-eluting beads fail to achieve complete stasis), whereas others avoid achieving complete stasis to prevent thrombosis of the feeding artery (in this method, drug-eluting beads are used as a method of drug delivery), thereby allowing for future repeat transarterial interventions. Efforts are typically made to be as selective as possible when performing chemoembolization for oligofocal hepatocellular carcinoma to maximize delivery of chemotherapy to the tumor while sparing uninvolved liver parenchyma. When diffuse multifocal disease is present, a lobar approach can be employed if liver function is preserved. In patients with metastatic disease, a lobar approach is commonly used given the widespread multifocal nature of metastases.

Chemoembolization with drug-eluting beads loaded with doxorubicin (DEBDOX) are used for treatment of hepatocellular carcinoma, whereas the irinotecan beads (DEBIRI) are used for metastatic colon cancer. Other cancers such as intrahepatic cholangiocarcinoma, neuroendocrine metastases, and metastases from breast, choroid (uveal) melanoma, and pancreatic cancer are treated either with DEBDOX or DEBIRI.

Overall, DEBDOX is well tolerated, with significantly decreased incidence and severity of transaminitis and doxorubicin-related side effects compared to conventional chemoembolization. DEBDOX appears to be more efficacious and safer compared to conventional chemoembolization in patients with advanced disease (bilobar disease, recurrent disease, and in patients with Eastern Cooperative Oncology Group [ECOG] performance status of 1) (Table 8.1).10,14–28 The reported objective response rates ranged from 50% to 100% (Fig. 8.1).10,14–28 Except for one retrospective study that reported survival advantage of DEBDOX over conventional transarterial chemoembolization (cTACE),17 DEBDOX appears to offer similar overall survival rates compared to that of cTACE. However, survival advantage, if any, of DEBDOX in advanced stage hepatocellular carcinoma is yet to be explored. 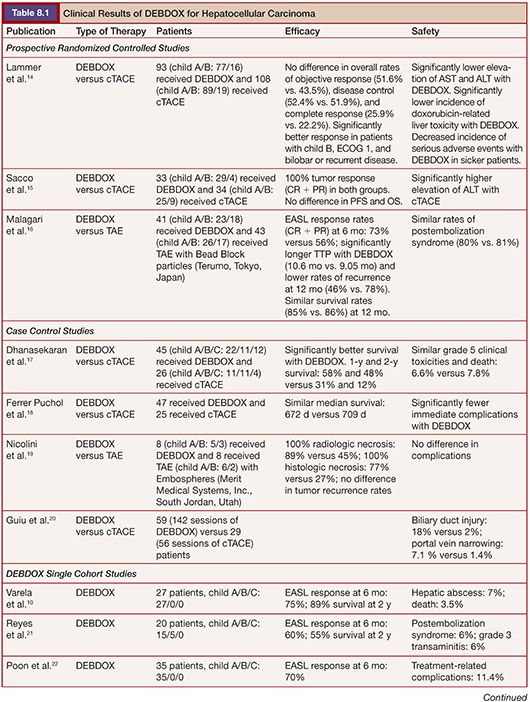