The spinal cord forms in three stages beginning in the third gestational week when the notochord induces surrounding ectoderm to differentiate into neuroectoderm.1 The first stage, neurulation, involves progression from neural plate to neural groove to neural tube.1 The notochord transforms into the nucleus pulposus of the intervertebral disks.2 The second stage, canalization, involves formation of cysts within the caudal cell mass that gradually coalesce and fuse to the distal neural tube to form the primitive spinal cord. The third stage, retrogressive differentiation, involves programmed cell death leading to regression of the primitive distal spinal cord to form the fetal conus, filum terminale, and ventriculus terminalis1,2 (Fig. 40-1). 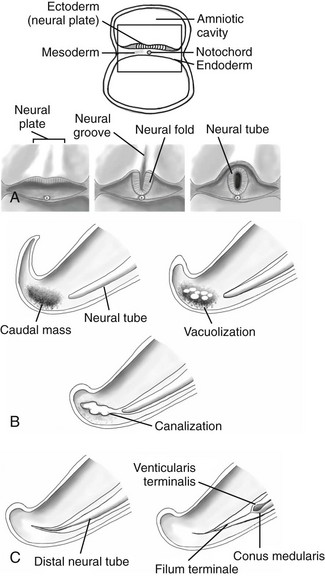 Figure 40-1 Embryological development of the spinal cord.
A, Neurulation schematic illustrates progression from neural plate to groove to neural tube. B, Canalization schematic depicts coalescence of cysts within the caudal cell mass that fuse to the distal neural tube. C, A retrogressive differentiation schematic reveals the process of programmed cell death forming the conus medullaris and filum terminale.

The vertebral bodies develop from somites that have been converted through signaling molecules to form sclerotomes.3 The caudal and cranial portions of adjacent sclerotomes fuse to become single vertebral bodies. Failure of this process leads to congenital vertebral segmentation anomalies such as block or hemivertebrae (Fig. 40-2).4,5 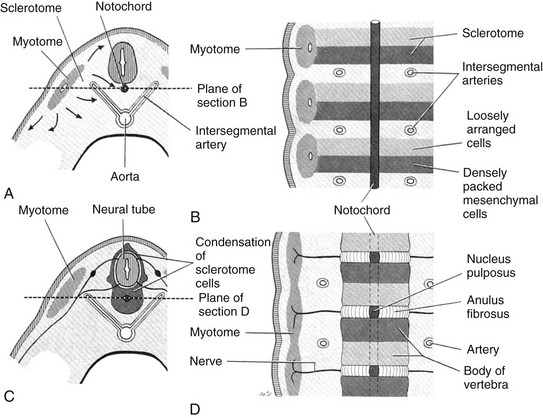 The spinal cord is larger in the cervical and lumbar regions than in the thoracic region. Paired dorsal and ventral nerve roots arise from each level, and the spinal cord itself is held in place by the lateral dentate ligaments. The distal end of the spinal cord and the thecal sac typically extend to the L2-L3 disc space and the S2 level, respectively.

Although 5% of humans have differing numbers of vertebrae, most often people have 7 cervical, 12 thoracic, and 5 lumbar vertebral bodies, as well as 5 sacral and 4 coccygeal segments.6 Running craniocaudal are the anterior and posterior longitudinal ligaments, supraspinous and interspinous ligaments, and ligamentum flavum.

The pediatric spine is imaged with plain radiographs, ultrasonography, computed tomography (CT), and magnetic resonance imaging (MRI), depending on the age of the child and indication for the examination. Radiographs and CT are used to screen for osseous anomalies and acute conditions such as trauma. In neonates, spine sonography and MRI are the most frequently used modalities. Spine ultrasonography is the ideal screening study for infants younger than 6 months because it provides excellent resolution and does not expose patients to radiation. It is able to provide sufficient characterization of spinal anomalies to determine if intervention is required, if MRI is needed acutely, or if further imaging can be delayed. In older infants and children, MRI is the study of choice for evaluation of the spine.

The indications for spine ultrasonography include screening neonates with multiple congenital anomalies, screening complicated dimples with skin stigmata, and evaluating soft tissue masses that suggest possible underlying closed (occult) spinal dysraphism, as well as determining the cause of failed lumbar puncture and localizing fluid for possible additional attempts at lumbar puncture.9,10 High-risk skin stigmata include atypical dimples (>5 mm) located above the gluteal crease (>2.5 mm from the anus), dimples in which the bottom cannot be visualized, and those with skin stigmata such as a hairy patch, hemangioma, a mound of soft tissue, skin tag, or tail.11 In anomalies requiring surgery and dimples draining cerebrospinal fluid, urgent MRI is the initial study of choice.12,13 Additionally, MRI is helpful to further characterize anomalies found on ultrasound and is best performed immediately prior to therapeutic intervention.9