Focused Ultrasound for Treatment of Fibroids

Magnetic resonance-guided focused ultrasound—approved by the FDA in October 2004—has the potential to completely revolutionize the treatment of uterine fibroids [7]. MRgFUS provides a nonsurgical outpatient method of ablating fibroids that preserves the uterus and enables patients to return to normal activity within 1 or 2 days. Based on two groundbreaking core technologies, MRgFUS gives physicians the ability to destroy fibroid masses by producing precise amounts of heat and vibration within the body with pinpoint accuracy. It uses heat rather than radiation to destroy tissue and can be used again and again without harmful side effects. MRgFUS has only a few serious FDA reportable adverse events including skin burns, which result from poor coupling from hair and scars on the skin, and nerve damage, which resolved within a year [8]. There is also a slight risk of damage to adjacent organs, such as bowel perforation.
Currently, MRgFUS treatment for uterine fibroids is offered at medical centers in 15 states in the United States and in 14 countries around the world. Over 3,000 patients have been treated worldwide, including 370 who are being followed for the FDA post market. Four more companies are developing and testing similar technology for fibroid treatment [9]. The technology is evolving, as are guidelines for treatment. Several studies have shown that MRgFUS significantly improves clinical symptoms in 70–80 % of women with uterine fibroids [6–8, 10, 11]. Studies have demonstrated a correlation between the treated volume of the fibroids, improvement in symptoms, and lesion shrinkage [12].

How Does It Work?

In conventional diagnostic ultrasound, ultrasound waves pass through the anterior abdominal wall. Significant heating only occurs where the waves converge at the focus. However, because lower levels of energy proximal and distal to the focus have the potential to damage normal tissue, real-time monitoring of the entire beam is critical.
When transmitting the ultrasonic energy continuously, high-intensity focused ultrasound can raise tissue temperature at the focal point. We quantify the level and duration of this temperature elevation as the tissue’s “thermal dose.” Thermal effect can be used to create either a low-level thermal rise over several hours (local hyperthermia) or, conversely, a short, highly localized high temperature rise that cooks the tissue (thermal ablation).
Depositing a high level of ultrasonic energy causes an intense increase in temperature, thermal coagulation, and cell death. Exposing tissue, for even 1 s, to a temperature of 56 °C/130 °F is enough to induce irreversible thermal damage to cells. Thermal necrosis results from the denaturation of the cell proteins, just like cooking an egg. Researchers and physicians use focused ultrasound’s thermal coagulation effect to noninvasively treat a variety of diseases, including symptomatic uterine fibroids; breast, liver, and prostate cancer; low back pain; and brain disorders (essential tremor and neuropathic pain) (see Fig. 26.1). 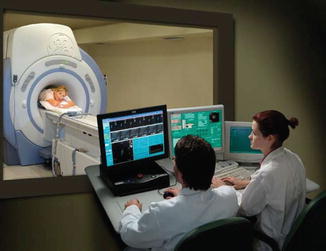 Doctors communicate with patient during procedure (Courtesy of Insightec, Inc)
ExAblate uses a “sonication” process in which focused ultrasound (FUS) concentrates a high-energy beam on a specific point, raising its temperature to 60–85 °C resulting in destruction of fibroid tissues by coagulation necrosis [8]. High intensities of energy are accumulated in a relatively small tissue volume, which effectively results in tissue destruction through heat and cavitation effects [13].
Multiple sonications are required to ablate the fibroid tissue. The MRI system provides essential data including the location of the intended target (fibroid) and internal organs where nontarget treatment could result in complications. Additionally, the MRI allows for real-time thermometry, so that the treating physician can adjust power to achieve intended necrosis of the fibroid while minimizing injury to normal tissue from too high a temperature. This magnetic resonance thermometry provides instant feedback as to the thermal dose delivered during each sonication (see Fig. 26.1).
In contrast to UAE where occlusion of vascular supply causes destruction of fibroid and normal myometrium, MRgFUS spares normal myometrium. Specific leiomyomata are targeted for treatment with MRgFUS, also sparing myometrium. However, some leiomyomata may go untreated due to time limitations or safety problems in targeting, potentially resulting in variable in treatment outcome (Fig. 26.2).

In early clinical trials for MRgFUS technology, the inclusion and exclusion criteria were identical. All women in these studies were premenopausal and at least 18 years old, had significant leiomyoma symptoms (as defined by a transformed symptom severity score greater than 41 out of 100 points on a validated leiomyoma specific quality of life measure (Uterine Fibroid Symptoms Quality of Life Questionnaire)), and did not desire future childbearing. Exclusion criteria included women with uteri larger than 24 weeks gestational size, a hematocrit less than 25 %, a positive pregnancy test, major medical disease, or contraindication to magnetic resonance imaging such as a pacemaker or weight over 250 lb.
The FDA relaxed treatment protocols on April 30, 2004, so that patients treated after that date in phase 3 continued-access protocol and the post-market study, both in the United States and abroad (n = 64 and 61, respectively, overall 34 %), were allowed to have more extensive treatment. Treatment volume allowances were increased from 33 to 50 % for all leiomyomata except submucosal ones, and maximal treatment volume was increased to 150 mL per leiomyoma. Extension of treatment time from 120 to 180 min and treatment border restrictions increased to 1.5 cm from the endometrium and 0.5 cm from the leiomyoma capsule to the serosal surface were eliminated. This allowed more patients to be treated with MRgFUS safely based on clinical trial data.
A post-marketing study of African-American women was mandated by the FDA and required treatment candidates to be “consistent with product labeling,” thus making the same enrollment criteria as noted previously implicit rather than explicit.
A pretreatment magnetic resonance imaging scan was required for treatment planning to assess the accessibility of leiomyomata to treatment without injury to the bowel, bladder, or pelvic nerves; exclude adenomyosis or lesions suspicious for uterine sarcomas; and demonstrate pretreatment vascularization of the leiomyoma by using the intravenous contrast agent gadolinium. African-American women have an increased incidence of fibroids, earlier onset of disease, and more severe symptoms [14–16]. Despite their increased risk of disease, African-American women historically comprise only approximately 15 % of subjects in fibroid studies [17]. Recent ongoing Fibroid Interventions: Reducing Symptoms Today and Tomorrow (FIRSTT) trial is focused on recruitment of African-American women to analyze differences. This trial will provide for sub-analysis of the data specific to African-American women and explore further the genetic linkage [18].
Current inclusion criteria to receive MRgFUS as a viable treatment option include the following: (1) a patient must first have a uterine fibroid(s), (2) the fibroid(s) must be relevant to the patient’s symptoms, and (3) the location and size of the fibroids must correlate with the patient’s symptoms. For example, subserosal fibroids located just underneath the serosa of the uterus grow outward resulting in compression symptoms to adjacent organs, i.e., bladder (urinary frequency) and intestines (constipation) (see Table 26.2). Subserosal fibroids associated with uterine bleeding instead of compression symptoms may not be a candidate for removal by MRgFUS [8]. Exclusion criteria are extensive and include pregnancy, other uterine pathology, severe anemia, and other medical conditions (see Table 26.3).


Patients with scars or moles in the mid-abdominal region could possibly be excluded from having this procedure performed because scars have high ultrasound absorption and may lead to pain or damage to the skin [7]. Individuals that have been diagnosed with other pelvic diseases should also be excluded from this procedure. Women who weigh more than 250 lb. are not candidates for MRgFUS [7
Only gold members can continue reading. Log In or Register to continue