Therefore, exact segmentation of tumor boundaries is practically not possible with current imaging technology [43]. Consequently, the purpose of segmentation should be to define a reasonable plan for resection, which maximizes tumor cytoreduction while minimizing risk to normal adjacent brain. In addition, the value of segmentation extends beyond visualization to potential diagnostic applications. Recent work has applied semiautomatic segmentation to track changes in tumor volume over time [44].

As described above, functional MRI provides a noninvasive mapping of active brain areas during prescribed tasks. Task-specific fMRI data can be thresholded by the clinician or an fMRI expert, and then activations of interest can be converted into volumes of interest and segmented as described above. fMRI maps can be coregistered and overlaid against structural images to approximate the geometry of functional areas adjacent to a lesion. The spatial orientation of fMRI regions is a key factor in determining a safe corridor for approaching a lesion. In addition, in the case of tumors, fMRI-based 3D models can identify resection margins that are at highest risk for causing neurologic deficit. At present, fMRI studies require coordination between the surgeon, radiologist, and fMRI analyst to select appropriate tasks, analyses, and threshold levels in light of patient-specific considerations.

In the context of neurosurgical planning, tractography has the potential to delineate larger white matter tracts preoperatively in order to inform both the resection approach and boundaries. Tractography is most useful for visualizing the displacement of the motor, somatosensory, and visual and language-related pathways by mass lesions [45, 46]. For lesions involving subcortical white matter, conventional imaging cannot clearly demonstrate the direction of deflection of fibers by a mass lesion. DTI tractography can often predict the location of fibers that may have crucial functional roles. The utility of tractography may be limited by pathology-induced changes within or near a tumor: neoplastic or necrotic disruption of the cytoarchitecture may alter or eliminate axonal organization, while edema can sufficiently reduce the apparent directionality of diffusion such that tractography algorithms will stop due to insufficient anisotropy. Therefore, DTI tractography is most useful as a positive test, as a negative result does not definitively rule out the possible presence of tracts. Tractography is typically selected by seeding from manually drawn regions of interest [45] (ROI) or from functional activation areas including fMRI [46] or MEG [47]. For neurosurgical review, a promising approach is to select tractography interactively (Fig. 37.2) in a three-dimensional visualization [48]. Eventually, automated tractography identification may significantly reduce the necessity of manual selection using methods such as fiber clustering [49] and fiber atlas analysis [50, 51]. 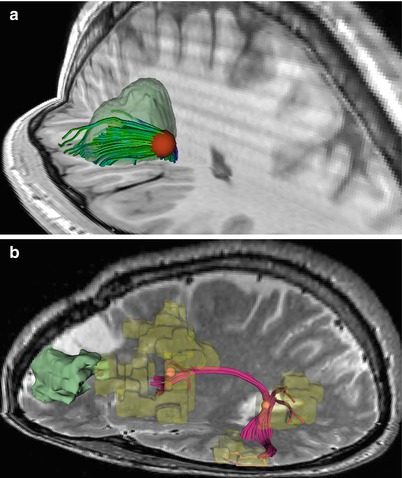 View of interactive tractography visualization. (a) Tracts are continuously updated as the seeding sphere is moved. (b) Interactive seeding to select tract from frontal to temporal lobe in vicinity of tumor, connecting respective fMRI activations from a noun categorization task

Surgical planning informed by preoperative structural and functional cross-sectional imaging is performed to minimize the risk of surgical complications and improve the efficacy of intervention. Defining routes of safe entry for accessing lesions involving key functional areas logically lowers the risk of neurologic deficits associated with disruption of functional neurologic structures during surgery. fMRI may demonstrate migration of functional areas away from a lesion and permit safe surgical access to a lesion within classically eloquent cortical structures [52–54]. Moreover, the knowledge the surgeon is able to infer from preoperative functional mapping about the relationship of a given lesion to functional areas may improve extent of resection. The use of structural and functional MRI may enable the surgeon and patient to evaluate the risks of surgery and to make informed decisions regarding balancing the potential for neurologic deficit with incremental improvements in extent of resection. However, given the uncertainty inherent in structural and functional MR imaging, both the surgeon and patient must also be aware of the risks of preoperative planning based on data that may not perfectly predict structural and functional relationships within the brain. In cases presenting high functional risk and uncertainty in functional localization based on preoperative imaging, intraoperative electrocortical stimulation (ECS) mapping remains the gold standard. Furthermore, surgeons must be aware that the geometry of normal and lesion structures, DTI-defined white matter tracts, and fMRI-defined functional areas may shift significantly as surgery proceeds. In the absence of mechanisms to correct for intraoperative shift, surgeons should recognize that preoperative planning data is most accurate prior to an operation and that the accuracy of presurgical plans may be compromised during the normal course of exposure and resection.
Despite the limitations of fMRI and DTI, they have become useful tools in the safe execution of many neurosurgical operations. Specifically, defining the relationship of neoplastic, epileptogenic, or vascular lesions to language and/or motor areas is of utmost importance in planning and performing resection. Even for lesions within eloquent areas, fMRI and DTI can illustrate safe corridors for entry (Fig. 37.3). For lesions involving major fiber pathways such as the corticospinal tract, DTI is useful in detecting the direction of tract deflection (Figs. 37.4 and 37.5). 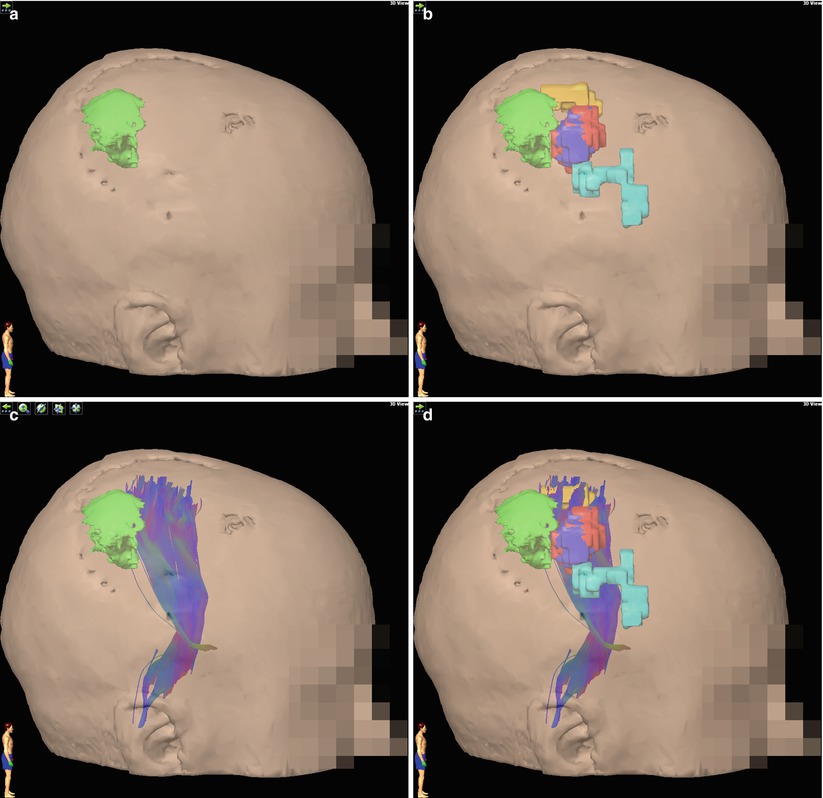 Demonstration of fMRI and DTI for preoperative planning in a recurrent glioma adjacent to motor areas. A three-dimensional reconstruction of the tumor, based on structural MRI, is shown (a). Volumetric fMRI (b) and DTI (c) data can be incorporated to demonstrate the geometric relationship of the lesion to key structures. The synthesis of all data sets (d) demonstrates a useful map for preoperative planning, demonstrating that the area at highest risk for causing neurologic deficit is the anterior border of the tumor 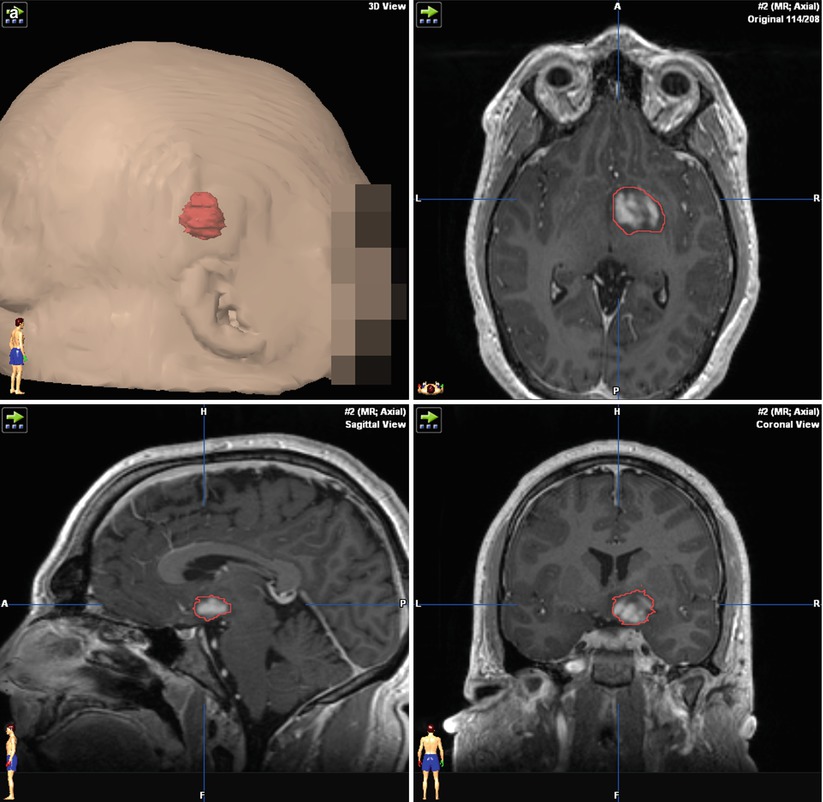 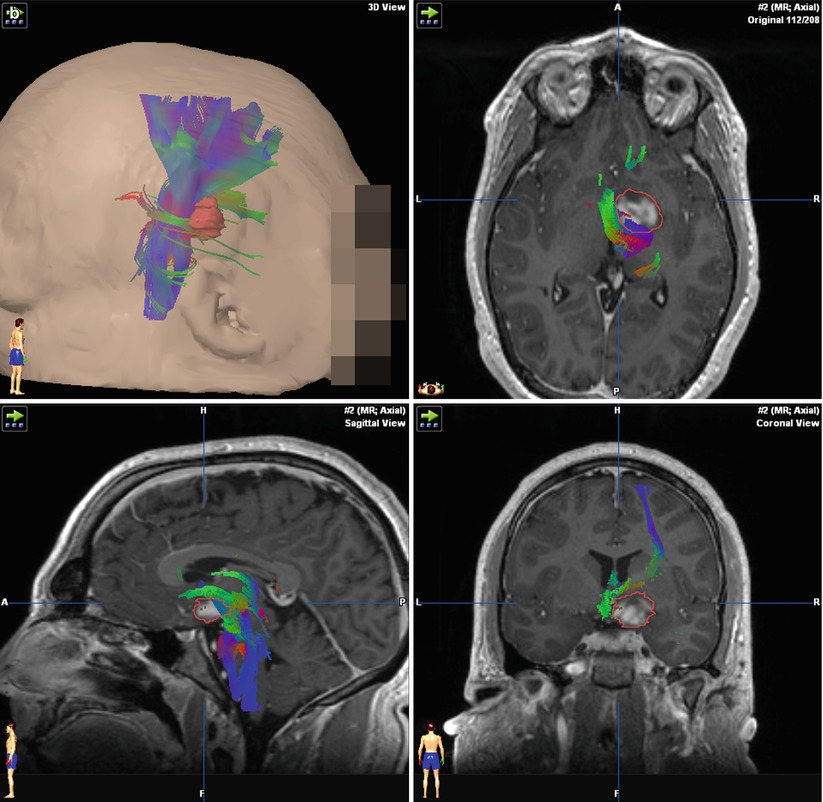 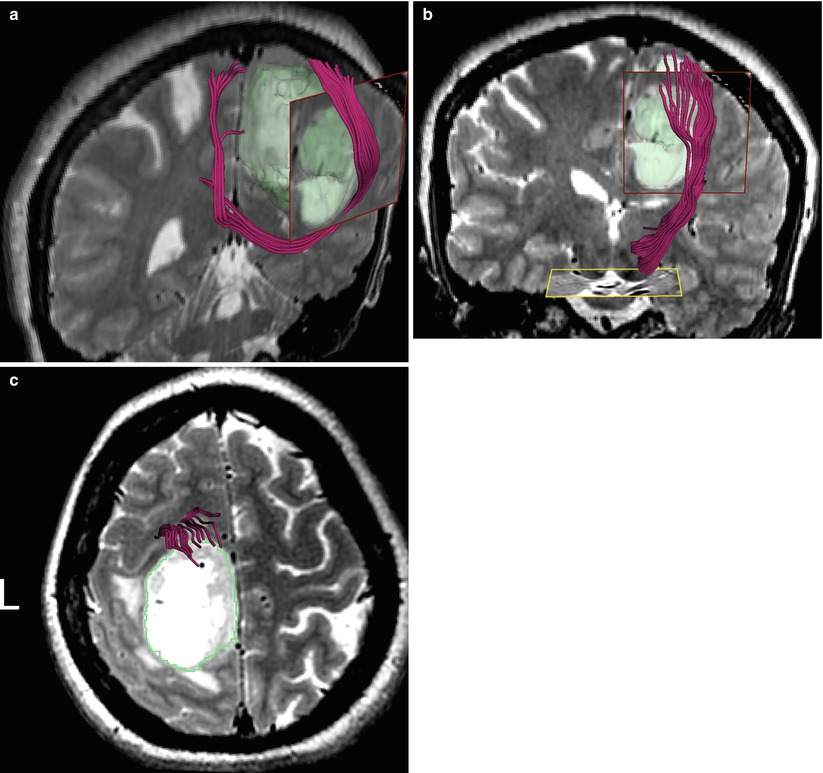 DTI demonstrates tract displacement due to left medial glioblastoma. (a) Corpus callosum fibers are displaced lateral and anterior relative to contralateral hemisphere. (b) Corticospinal tract is displaced anterior to tumor, (c) congruent with apparent compression on axial T2
In the setting of anterior temporal lobectomy for intractable epilepsy, the laterality of language dominance and language-related memory activation can be established preoperatively. Functional MRI is becoming increasingly useful for determining complex patterns of language lateralization that are not easily detected with Wada testing as well as the asymmetry index of memory encoding [55]. DTI can be used to demonstrate white matter structures at risk from temporal lobectomy, such as Meyer’s loop, and may, therefore, provide information to prevent unnecessary damage to visual pathways [56] (Fig. 37.6). 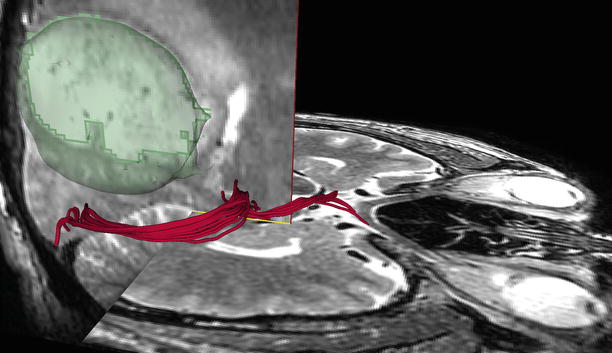 DTI demonstrates putative optic system tracts from chiasm to visual cortex in patient with large parietal tumor
Although neither fMRI nor DTI has been assessed in a large-scale, multicenter, clinical trial, an increasing body of evidence points to clinical utility. fMRI results are most robust for localization of motor function [8, 57]. Based on a series of 54 patients, Krishnan et al. [58] recommend fMRI as the first level of mapping and suggest further direct cortical stimulation (DCS) mapping when the resection margin is within 10 mm of fMRI activation. Utility of fMRI for preoperative language mapping is less clear: Giussani et al. [59] reviewed nine studies comparing fMRI to intraoperative DCS and concluded that fMRI could not substitute for DCS language mapping due to inconsistent results among the studies. Grummich et al. [21] found a similarly inconsistent congruence between fMRI and MEG mapping of language. On the other hand, fMRI has shown strong results for language lateralization as compared to the Wada (intracarotid amobarbital) test, with several studies [60, 61] finding up to 90 % agreement between Wada and fMRI language lateralization results.
Evidence supporting the benefit of DTI is growing, with several recent studies indicating positive results. In one of the first large-scale studies, Wu et al. [62] reported a randomized clinical trial of 238 patients undergoing surgery using DTI-augmented neuronavigation or standard structural neuronavigation only and found significant benefits for both increased postoperative survival and reduced postoperative deficit when DTI was used. Bello et al. reported greater than 95 % agreement between DTI and intraoperative subcortical mapping [63] in a series of 64 cases.