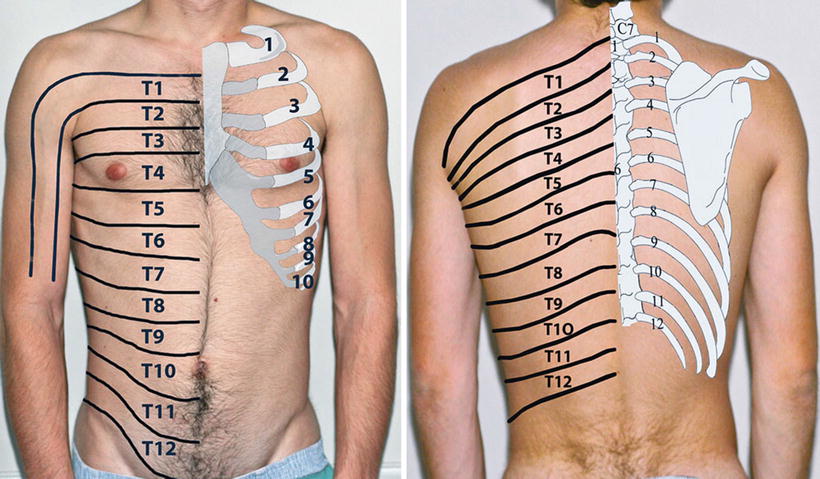 Dermatomes of thoracic nerve roots and relation to ribs

Second, intercostal nerve also supplies a small branch of the ventral ramus to the brachial plexus.

Local anesthetic choices are similar as in other nerve block procedures, the most common being lidocaine or bupivacaine. For single-shot INB, a volume of 3–5 mL is usually more than adequate per level injected. Total dose however should be monitored to reduce the risk of systemic toxicity. Alkalinization of the local anesthetic for intercostal nerve blocks has been found to be of little clinical benefit [13]. The use of epinephrine has been proposed as a possible increased safety factor by constricting local vessels and reducing uptake or by producing a tachycardia as a warning sign of accidental intravascular injection. However, other studies have called this into question and shown increased hemodynamic changes compared to other types of nerve blocks [14].
For continuous INB, an infusion of 0.25 % bupivacaine at 2 mL/h is usually adequate.

INB has been shown to be useful for a variety of anesthetic and analgesic uses in the distribution of the torso. Among these are:

Abdominal wall pain
Studies have shown that INB for post-thoracotomy pain offers advantages in preserving effort-dependent pulmonary function compared to opioid analgesia [15, 16].
The first three intercostals also innervate sensation portions of the upper arm and axilla, while the lower intercostals from T6 to T12 innervate the muscles of the upper abdomen and overlying skin [17]. Therefore, intercostal nerve blocks at the appropriate level can easily control symptoms in the affected region, allowing for decreased dependence on opioid analgesics. This can be useful in cases where one needs to avoid respiratory depressant or mental status changes.
Effective perioperative analgesia with continuous INB also has been demonstrated to reduce the incidence of chronic post-thoracotomy neuralgia [18]. While bupivacaine single-shot INB is reported to last longer than lidocaine, no significant difference has been reported in the outcome between infusions of lidocaine or bupivacaine for continuous infusions [19].
Trauma to an intercostal nerve by thoracotomy can lead to either pain or a sensory loss over the skin of the affected nerve or pain assisting in identifying the level injured. Similarly, trocar placement during laparoscopic procedures such a cholecystectomy can lead to similar problems. Numerous studies also have looked at use for a variety of conditions as noted above. Most studies are anecdotal, as noted in a recent case report on treatments for costochondritis [20].

The thoracic paravertebral space is a somewhat triangular space that is laterally continuous with the intercostal space [23, 24]. Anatomical borders are:

Intercostal nerves, their collateral branches and posterior primary rami, and the thoracic sympathetic chain all pass through the paravertebral space, making it an ideal site for blockade of the various afferent nociceptive nerve impulses [25].
The mechanism of action of the PVNB is intercostal nerve block via the paravertebral spread of local anesthetic [26]. Spread of a mean of six dermatomes (range, five to seven) has been demonstrated by injection of methylene blue at thoracotomy and infusion of contrast medium in postoperative patients [26]. Techniques described have included blind placement [27, 28], by neurostimulator [29], by loss of resistance, by and ultrasound.
Clinically, PVNB is comparable with epidural block in respect to pain relief but without the well-known side effects of the epidural analgesia [30]. PVNB is therefore seen as a useful technique for pain control of breast, thorax, and abdomen, and many have considered it the technique of choice [31–33]. While one prospective study failed to that show a single-shot PVNB was superior to continuous wound infiltration [34], the technique of continuous catheter PVNB is gaining popularity. The ability to perform this effectively at bedside with ultrasound guidance [35] also simplifies the ability to perform this procedure in a greater variety of settings.
The effectiveness of PVNB injections with local anesthetic and steroids in acute herpes to prevent postherpetic neuralgia has been studied and been shown to be useful [36].

Complication rates for INB are low. They are reported to include:

Total spinal anesthesia
Many studies have documented the higher plasma levels of local anesthetic concentrations after intercostal nerve block [37] relative to other nerve block locations. However, the incidence of local anesthetic toxicity is low.
Pneumothorax, one of the most commonly thought of complications, is actually also rare. One study in surgical patients looked at over 100,000 individual nerve blocks and found no severe systemic toxic reactions, and the incidence of pneumothorax was 0.073 % [38]. Another study in patients who received INB for rib fractures due to trauma showed a higher rate of 1.4 % [39], still a low rate considering the higher risk of pneumothorax in rib fractures.
Rare complications can include total spinal anesthesia. This may occur by inadvertent injection into a dural cuff extending outside the intervertebral foramen [40, 41]. This has been reported with paravertebral block injections and catheter placement [42], and similarly, neurolytic injections have led to total spinal cord injuries.