The worldwide incidence of nontraumatic subarachnoid hemorrhage (SAH) is estimated to be about 6 cases per 100,000 patient-years.1 SAH is seen predominantly in patients younger than 60 years of age. The principal causes of spontaneous SAH are ruptured aneurysms (85%), benign nonaneurysmal perimesencephalic (pretruncal) hemorrhage (10%), and rare causes (5%). Gender, race, and geographic region affect the incidence of SAH. Women have a 1.6 times greater risk of developing SAH than men. Black individuals have a 2.1 times greater risk than whites. The highest incidences of SAH occur in Japan (23 cases per 100,000 patient-years) and Finland (22 cases per 100,000 patient-years). The most important nonmodifiable risk factor for developing SAH is having a first-degree relative with SAH (increase in relative risk 6.6). Important modifiable risk factors are heavy alcohol consumption (relative risk 4.7), hypertension (relative risk 2.8), and smoking (relative risk 1.9).1

Intracranial hemorrhage is believed to occur in 10% to 30% of all strokes and is predominantly intraparenchymal in such cases. The exact incidence may be higher or lower, with more recent sources reporting a much lower incidence.2 Hypertension is the most common cause underlying most nontraumatic intracerebral hemorrhage (50%-60%). Hemorrhages associated with hypertension increase in frequency with age. Cerebral amyloid angiopathy (CAA) is the second most common cause of nontraumatic intraparenchymal hemorrhage and is responsible for 10% to 12% of all hemorrhagic strokes. As with hypertensive hemorrhage, the incidence of CAA-related hemorrhage increases with age. It is rarely encountered in patients younger than 70 years of age. Parenchymal hemorrhage may occur as a result of venous thrombosis, underlying neoplasm, vascular lesion, and inflammatory lesion. Hemorrhagic neoplasms include high-grade gliomas, vascular metastases, and extra-axial masses such as pituitary adenomas and (rarely) meningiomas. Underlying vascular lesions include arteriovenous malformations (AVMs), cavernous malformations, and, less commonly, telangiectatic AVMs, developmental venous anomalies (DVAs), and dural arteriovenous fistulas (DAVFs). Hemorrhagic inflammatory lesions include herpes simplex virus type 1 and angioinvasive fungal infections such as aspergillosis and mucormycosis.

Classically, nontraumatic SAH presents as an acute severe “thunderclap” headache, which patients may characterize as “the worst headache of their life.” Although only 1 in 10 patients presenting with thunderclap headache actually has SAH, headache remains the most common presenting complaint for SAH. It may be the sole presenting symptom in 25% to 33% of patients with SAH. The remainder of patients with acute severe headaches may suffer instead from symptoms of migraine or tension headache, viral meningitis, and so on. SAH also causes meningeal irritation that mimics meningitis, with meningismus, photophobia, prominent neck or upper back pain, seizures, and obtundation. Because the symptoms and signs of SAH are nonspecific, SAH is misdiagnosed clinically in 12% to 51% of cases.3 Failure to detect acute aneurysmal SAH has serious consequences, because (1) the rate of recurrent SAH from an untreated ruptured aneurysm is 50% in the first year and (2) recurrent hemorrhage predicts a poorer outcome.

Isolated nontraumatic subdural hemorrhage is rare (but may be seen with bleeding diatheses, aneurysmal SAH, venous sinus thrombosis, osseous metastases, and intracranial hypotension). When present, nontraumatic subdural hemorrhage may cause nonspecific clinical findings such as headache, altered mentation, nausea or vomiting, lethargy, dysarthria, and ataxia. Focal neurologic deficits are not common. Large subdural hemorrhages can cause pupillary abnormalities such as ipsilateral pupillary dilatation and the inability to react to light. Chronic subdural hemorrhage is often more insidious in its clinical presentation. Generalized weakness, ataxia, global cognitive decline, memory dysfunction, and headache can be present in varying severity. In the setting of a chronically debilitated or elderly patient, these nondescript symptoms may be overlooked, especially if they are subacute in onset.

The vast majority of nontraumatic SAH results from rupture of cerebral aneurysms. Most aneurysms are now believed to arise from degenerative injury to the vessel wall that accumulates over time as a result of hemodynamic stress, perhaps with congenital predisposition. Aneurysms are rarely encountered in children and young adults and when present have a different distribution and configuration than the typical “berry aneurysm” of older patients. The formation of aneurysms at characteristic locations is the result of the turbulent flow common to these locations rather than the result of any inherited defects in the arterial walls. Congenital aneurysms do arise in association with specific genetic conditions such as polycystic kidney disease and connective tissue disorders (e.g., Marfan’s syndrome) but are uncommon. Infective aneurysms arise secondary to septic emboli, most often in the setting of bacterial endocarditis. Aneurysms may rarely result from vasculopathies such as fibromuscular dysplasia and inflammatory arteritis. Atherosclerosis may lead to aneurysmal enlargement of the involved vessel, most often the vertebral basilar arteries. Aneurysms and their causes are discussed elsewhere in this text.

Nontraumatic, nonaneurysmal causes for SAH include arteriovenous malformations (AVM), infectious arteriopathies, and extension of intraparenchymal hemorrhage into the subarachnoid space. When SAH occurs in isolation anterior to the midbrain, the most likely cause is perimesencephalic (pretruncal) nonaneurysmal SAH. This entity most likely results from rupture of posterior fossa veins and occurs most commonly after sexual intercourse. It is regarded as benign, because recurrent hemorrhage is rare and the usual complications of SAH such as hydrocephalus and vasospasm are uncommon and/or mild.4

Intraparenchymal hemorrhage is most often the sequel of chronic systemic hypertension. Chronic arterial hypertension is believed to induce changes in small fragile vessels arising from the major proximal intracranial arteries. Fisher showed that chronic arterial hypertension causes histologic disorganization of the walls of small vessels and termed that pathology lipohyalinosis.5 Since then, lipohyalinosis has been understood to be either fibrinoid change or collagenous fibrosis, depending on which element predominates.6 Lipohyalinosis diminishes the integrity of the vessel wall, predisposes the patient to rupture of penetrating arterioles within the brain, and leads to hemorrhagic stroke. Hypertensive hemorrhage may also result from Charcot-Bouchard aneurysms, although these are less common than initially suspected. Hypertensive hemorrhages most commonly involve the basal ganglia and thalami of the deep supratentorial gray matter, the pons and midbrain of the brain stem, and the cerebellum. In common, all of these regions are supplied by small perforating arteries that arise from proximal intracranial arteries (e.g., proximal middle cerebral arteries and the basilar artery) and are therefore the sites most exposed to the deleterious effects of chronic systemic hypertension.

Cerebral amyloid angiopathy (CAA) is the second most important cause of intraparenchymal hemorrhage. It is clinically distinct from systemic amyloidosis and is caused by progressive deposition of β-amyloid protein in the media and adventitia of small to medium-sized vessels, resulting in the formation of twisted β-pleated sheet fibrils in the vessel walls.7 Histologic examination demonstrates staining with Congo red and deposition of crystals that appear birefringent under polarizing light microscopy. The abnormal protein weakens the structure of the vessel wall, causing fibrinoid necrosis, microaneurysms, and increased likelihood of hemorrhage. Recently, additional factors, such as the presence of apolipoprotein E4, have been shown to hasten the development of intraparenchymal hemorrhage in patients with CAA.8,9

CAA is most frequently seen in the subcortical vessels, so the resultant hemorrhages typically occur in or adjacent to the cortex, not within the deep gray matter, brain stem, and cerebellum, which are more commonly affected by hypertensive hemorrhage. CAA is also characterized by recurrent hemorrhages in the same location and multiple small focal asymptomatic hemorrhages (microbleeds) in other cortical regions. Recurrent hemorrhage leads to complex hematomas with acute and subacute elements and vasogenic edema that together may mimic the appearance of neoplastic hemorrhage on gross inspection and imaging.

Intraparenchymal hemorrhage can also result from reperfusion injury with acute hemorrhagic transformation of previously bland embolic arterial infarctions. After a clot occludes a vessel to cause infarction, naturally occurring fibrinolytic enzymes or thrombolytic therapy with tissue plasminogen activator (tPA) can cause lysis of the clot and restoration of blood flow to the damaged endothelial bed. The details underlying reperfusion damage have yet to be completely elucidated. However, a combination of oxidative radicals and metalloproteinases produced during reperfusion, and the thrombolytic agents themselves, can damage the endothelial cells, injure the basal lamina, and thereby open the blood-brain barrier, destroying the integrity of the cerebrovascular system.10,11 Increased vascular permeability then allows red blood cells to migrate into the surrounding extravascular space. Embolic infarctions typically undergo subacute mild hemorrhagic conversion. Revascularization of infarcted regions begins at 3 to 5 days after occlusion. Ingrowth of new immature vessels leads to extravasation of small amounts of blood into the infarcted brain.

High-grade gliomas are the most common hemorrhagic neoplasm. Small amounts of hemorrhage are present in virtually all grade IV astrocytomas. Extensive hemorrhage into a necrotic glioma may partially obscure the underlying mass. The most commonly encountered hemorrhagic metastases are melanoma (a common lesion that often bleeds), lung and breast carcinomas (extremely common lesions that bleed occasionally), renal and thyroid carcinomas (uncommon lesions that frequently bleed), and choriocarcinoma (rare lesion that bleeds in most cases). Hemorrhagic metastases are typically small solid masses that are perched on the margin of a large parenchymal hematoma.

Herpes simplex virus type 1 encephalitis is a hemorrhagic infective process, but the hemorrhage is typically microscopic and may not be detectable on CT or MRI. Angioinvasive fungi and tuberculosis may also produce hemorrhagic masses in the brain, particularly in immunocompromised individuals.

Acute hemorrhage can measure anywhere from 55 to 80 Hounsfield units (HU), higher than both normal gray matter (30-40 HU) and normal white matter (20-30 HU). In the clinical setting of severe anemia, acute hemorrhage can have a considerably lower attenuation and appear isodense to the brain. Although red blood cells begin to lose their integrity within hours of extravasation, complete cell lysis does not occur until later during the subacute stage of hemorrhage. In the first 12 hours after acute hemorrhage, the density of the blood often increases, because the hemoglobin becomes concentrated through clot formation and retraction. During the hyperacute period, the small amount of acellular serum expressed from the retracting clot forms a thin hypodense layer at the periphery of the hematoma (Fig. 19-1). Over the next 3 to 5 days, the brain surrounding the hemorrhage shows increasing lucency as proteases derived from the red cells induce vasogenic and cytotoxic edema and as an inflammatory response to the blood products disrupts the blood-brain barrier. 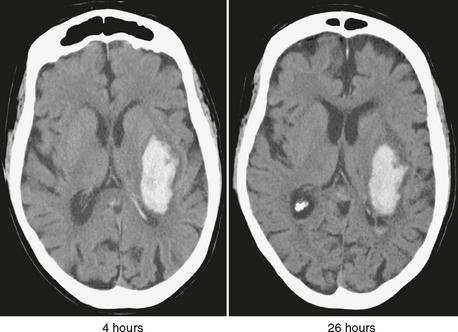