The skull vault comprises the neurocranium, which is bordered anteriorly by the facial bones or viscerocranium.1 Multiple bones contribute to the formation of the skull vault. These include, in anterior to posterior direction, the frontal bone, the greater wing of the sphenoid bone, the frontal process of the zygoma, the squamous portion of the temporal bone, the parietal bone, and the occipital bone. These bones are connected by fibrous sutural membranes that initially allow for the expansion of the developing brain in early life. Growth of the brain and adjacent skull are also facilitated by the presence of anterior and posterior fontanelles. The anterior fontanelle is located between the frontal and parietal bones at the junction of the sagittal and coronal sutures. The posterior fontanelle is located between the parietal and occipital bones at the junction of the sagittal and lambdoid sutures.

Scattered small vascular channels that transmit tiny vessels may be found anywhere about the skull vault but are most often seen in the vicinity of the major dural venous sinuses. These may involve one or both of the cortical tables of the skull. Arachnoid granulations may also be seen adjacent to the inner table often in the vicinity of the sagittal or transverse sinuses. These normal anatomic structures should not be mistaken for pathologic conditions.

Standard CT with bone algorithm is used to assess the osseous integrity of the bony tables of the skull. Lytic and erosive changes are readily identified as are frank defects within the calvaria. In addition, with CT it is possible to analyze the lesion margins for evidence of sclerotic change, which may suggest a more indolent process. Some soft tissue characterization of the lesion matrix is feasible with CT. CT is capable of detecting pure osseous lesions, trabeculated lesions, fat-containing lesions, cerebrospinal fluid (CSF)-containing lesions, or lesions that demonstrate variable cerebral contents. CT can be performed with a radiopaque skin marker in those instances when a lesion is initially identified as a clinically palpable mass. 2D and 3D CT reformatted images can be helpful in lesion localization and in assessing lesion extent for purposes of pretreatment planning.

Standard MRI sequences, including T1-weighted (T1W) and T2-weighted (T2W) sequences, in the axial, sagittal, and coronal planes are also useful in lesion localization. Moreover, MRI is extremely helpful in evaluating the marrow within the diploë. Contrast-enhanced sequences with fat suppression can assist in determining the extent of a lesion and whether it invades the epidural space and adjacent brain or dural venous sinuses. MRI is superior for characterization of the lesion contents, particularly for developmental lesions that involve the skull.

Catheter angiography can be used to further characterize suspected vascular lesions within or about the skull. The arterial supply to the lesion, when present, can be defined as can the venous drainage. This can be helpful in preoperative planning. Presurgical embolization of hypervascular lesions can facilitate resection and minimize intraoperative blood loss.

Skeletal scintigraphy is useful in either assessing or confirming the presence of multiple lesions, which may narrow the differential diagnosis to specific disease entities when lesion multiplicity throughout the skeleton is established.

Plain radiographs of the skull have a small, but important, role in the evaluation of skull lesions. They are helpful in assessing for lesion multiplicity. Additionally, they can help identify whether a lesion is lytic, sclerotic, or osseous and whether the lesion has sclerotic margins. Plain radiographs can help localize a lesion for subsequent cross-sectional evaluation.

Skull lesions present either as clinically palpable masses or as lesions that are incidentally detected during an imaging study obtained for some other clinical indication.3,4 Skull lesions originate within the calvaria proper. Lesions that arise from the scalp or meninges can invade the skull and rarely can simulate primary skull lesions. Furthermore, certain pathologic entities such as those related to trauma, infection, and inflammation can involve multiple contiguous structures and compartments. For the purposes of this chapter, this discussion will focus on those lesions that either arise directly from the skull or those lesions that are typically associated with the calvaria.

There are several criteria that can be used to analyze skull lesions. The first of these is the patient’s age. Certain masses, such as developmental lesions, tend to present in early childhood and young children whereas other lesions tend to present in adults (Table 7-1). While the approach to image analysis in adults remains the same, the frequency and types of lesions that are encountered with the skull vault are somewhat different. With respect to developmental lesions, in certain instances, the location of the skull lesion may predispose toward a specific diagnosis. It is extremely important to analyze the skull for the presence, or absence, of more than one skull lesion. The presence of multiple skull lesions usually indicates the presence of a multifocal neoplastic process in adults such as metastatic disease or multiple myeloma. In children, on the other hand, lesion multiplicity may not only reflect the presence of metastatic disease but also be due to an inflammatory process such as Langerhans cell histiocytosis. The next criterion that is used in lesion analysis is an assessment of a given lesion’s margins. A lesion with well-defined, sharp margins and evidence of reactive bone formation on CT or plain radiographs is more likely a benign entity because these features suggest a nonaggressive growth pattern. Lesions that possess ill-defined, irregular margins reflect the presence of a more aggressive process such as that which is seen in a neoplasm. The final parameter that should be included in the evaluation of a skull lesion is the assessment of the lesion matrix. The lesion may be characterized as lytic, sclerotic, or mixed on CT or plain radiographs. Lesion contents such as fat, CSF, or bone, identified with CT or MRI, may suggest a specific diagnosis. The absence of contrast enhancement may indicate the presence of a less aggressive lesion such as a developmental lesion.

The majority of congenital skull lesions are detected in the pediatric age group (see Table 7-1). Cephaloceles often present at birth as a skin-covered protrusion of variable amounts and types of intracranial contents through a defect in the skull.5,6 They have an incidence of 1 to 3 per 10,000 births. Two thirds of cephaloceles occur within the skull vault and involve the occipital region (Fig. 7-1). In addition to presenting as a palpable mass, the clinical presentation will depend on the extent and severity of associated central nervous system (CNS) anomalies (Fig. 7-2). The latter can be fairly well characterized by MRI, as can the cephalocele contents and the relationship to the superior sagittal sinus (Fig. 7-3). The skull defect can be defined with CT especially using 2D and 3D reformatted images. Dermoids and epidermoids are ectodermal inclusions that can involve the skull.7 Dermoids are often found in a midline location adjacent to the anterior fontanelle. Because of the presence of different ectodermal derivatives such as sweat and sebaceous glands, hair follicles, and teeth, these lesions can demonstrate a variable imaging appearance with certain features predominating within a given modality (Figs. 7-4 to 7-6). Plain radiography and CT are helpful in identifying any tooth-like structures or calcifications. The relationship to the midline as well as the outward beveled margins of the skull can best be seen with CT using multiplanar reformatted images. A focal skull defect may indicate the presence of a dermal sinus tract; the latter may serve as route for the spread of infection (Fig. 7-7). The MR signal characteristics will depend on the cyst contents; if a dermoid contains lipid, hyperintense signal may be seen on T1W images. Epidermoids are usually located within the lateral aspect of the skull vault and present as expansile intradiploic cystic masses. The wall of the epidermoid is lined by stratified squamous epithelium but is rarely seen on imaging because it rarely calcifies and usually does not enhance after intravenous contrast agent administration. On CT, an epidermoid presents as a well-circumscribed hypodense intradiploic expansile mass with smooth, sclerotic margins. The cyst contents show low to intermediate signal intensity on T1W MR images and increased signal intensity on T2W MR images (Fig. 7-8). A few of the congenital lesions that are usually seen in children may occasionally be encountered in adults (Fig. 7-9). These include dermoids and epidermoids where the imaging presentation is similar to that seen with children. Arachnoid cysts are not uncommon in adults, and whereas the majority of these cysts are intracranial extra-axial lesions they sometimes can present as an intradiploic lesion. Arachnoid cysts are intracranial cysts that can rarely present as skull involvement. In the latter situation, the cyst enlarges and gradually erodes, thins, and deforms the adjacent portion of the inner table through CSF pulsations (Fig. 7-10). These are large simple CSF-containing cysts that do not enhance and are readily diagnosed with CT and MRI.8 These arachnoid cysts can be differentiated from parietal thinning, a normal developmental variant of the parietal bones that can present as a palpable skull deformity and may involve either one side or both sides of the skull vault (Figs. 7-11 to 7-13).9 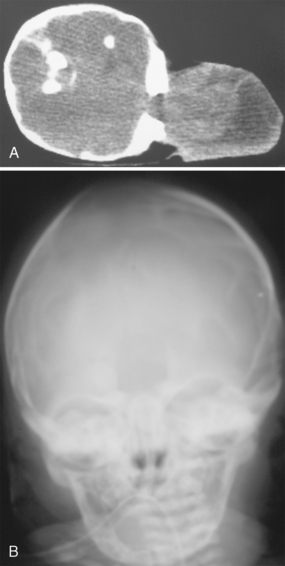 FIGURE 7-3 Cephalocele: 1-day-old female neonate with occipital mass. A, Lateral skull radiograph shows the mass. B, T1W axial MR image shows a predominantly hypointense mass; the sagittal sinus is in normal location. C, T2W axial MR image shows increased signal intensity within the herniated sac. Normal flow void is seen within the sagittal sinus, which, in this case, is separate from the lesion. 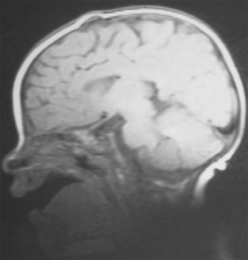 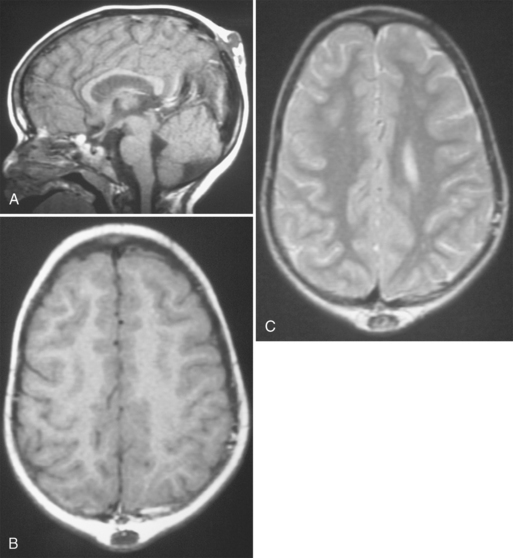 FIGURE 7-5 Dermoid: 5-year-old girl with incidental parietal mass detected during MRI evaluation for possible seizures. A, T1W midline sagittal MR image shows a hypointense mass that communicates via a stalk or tract with a small midline defect in the calvaria. B, The T1W axial MR image confirms the extracranial location of this hypointense mass. C, The lesion is heterogeneously hyperintense on the T2W MR image and does not communicate with the superior sagittal sinus.