The field of nephrology has expanded rapidly in the last 50 years as a result of improved understanding of the pathophysiology of renal disease and the increasing success and availability of renal replacement therapy for acute and chronic renal failure.1

The presence of CKD is of major importance for an individual because it is associated with a markedly increased risk of cardiovascular, infectious, and malignant complications compared with the general population.4–7

The incidence of acute renal disease is more difficult to ascertain but is also probably increasing. A recent comprehensive national survey in Scotland reported 297 patients pmp per year in 2002 had acute renal failure (ARF) severe enough to require dialysis treatment.9 This compares with previous estimates in the United Kingdom of between 18 pmp per year and 187 pmp per year in publications covering the 1980s and 1990s.10–13

Renal replacement therapies (dialysis and kidney transplant) are expensive, and the management of renal disease places a high burden on health-care budgets compared with other specialties.

This chapter will describe the detection of renal disease and the approach to the patient with renal disease. Ultrasound scanning of the urogenital tract has a pivotal role in investigating the causes of renal disease. In selected patients it is also of value in assessing prognosis, assessing disease progression, and in treating urinary obstruction.

A basic understanding of how the normal kidney functions is important in order to appreciate the clinical manifestations of renal disease. A brief description of renal function will be followed by an overview of the presentation and investigation of adults with renal disease. 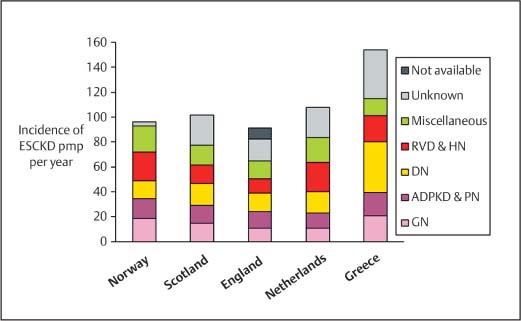 • The incidence of both acute and chronic kidney disease is rising

The kidney performs several functions. The main role of the kidney is to excrete metabolic waste and control the solutes in extracellular and intracellular fluid. It also has endocrine functions and plays a major role in control of blood pressure and drug pharmacokinetics. The functions of the kidney and clinical manifestations of failure of these functions are summarized in Table 1. 1.

The performance of all these kidney functions is dependent on approximately one million nephrons in each kidney (Fig. 1.2). Blood from the renal arteries is delivered to the glomerular capillaries. Ultrafiltrate enters the proximal tubule by filtration of blood through the basement membrane that lies between the endothelium of the glomerular capillary and the glomerular epithelium. The quantity and content of the ultrafiltrate is dependent on the driving pressure within the intraglomerular capillaries and the basement membrane permeability. The tubules reabsorb and secrete solute and/or water from the ultrafiltrate under the influence of numerous homeostatic factors. The tubules converge to form collecting ducts, calyces, and eventually the ureters, which leave each renal pelvis to drain the urine into the bladder.

a Many nitrogenous waste products are excreted, but urea and creatinine are the ones most commonly measured

b Associated with renal bone disease and cardiovascular disease 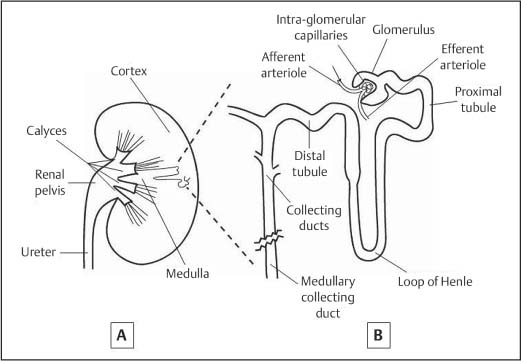 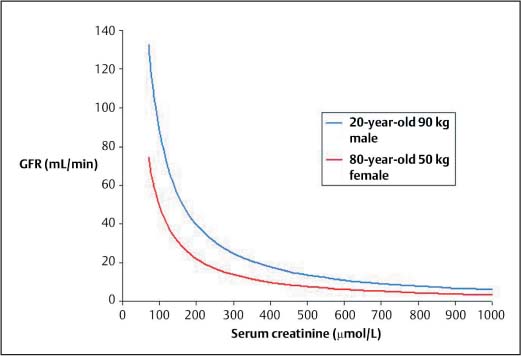 Fig. 1.3 Relationship between serum creatinine concentration and GFR. The relationship is dependent on muscle mass, as illustrated by the difference between the 20-year-old male and the 80-year-old female. In general a serum creatinine above the upper limit of the normal range (approximately 120 μmol/L) implies at least a 50% reduction in GFR. A rise from 100 μmol/L to 200 μmol/L reflects a greater loss of renal function than a rise from 400 μmol/L to 500 μmol/L

The most accurate measures of GFR, such as inulin clearance, are too cumbersome for routine clinical practice. For this reason measurement of creatinine clearance can be used as an estimate of GFR. Creatinine is derived from muscle metabolism. It is suitable for estimating GFR because it is produced at a constant rate, is almost entirely filtered at the glomerulus, and is not reabsorbed by the tubules. Measurement of creatinine clearance requires a 24-hour urine collection, which is often inconvenient for the patient, may lead to false results if the collection is incomplete, and precludes an immediate assessment of renal function. For these reasons measurement of serum creatinine concentration is the most commonly used test of renal function. The relationship between serum creatinine and GFR is shown in Figure 1.3.

Renal disease may present in many ways depending on the underlying causes, the severity, and the duration of the disease. Renal disease may be primary (i. e., limited to the kidney) or secondary (i. e., occurring as part of a systemic disease affecting more than one organ).

The presence of proteinuria and microscopic hematuria can easily be detected by commercially available dip-stick tests. Dipstick testing of urine is performed in a number of settings. Thus proteinuria and/or hematuria may be detected at a routine insurance or employment medical, during pregnancy, or during admission to hospital for unrelated reasons. It may also be detected when investigating patients with hypertension or elevated serum creatinine.

Dipstick proteinuria should be confirmed and quantified in a 24-hour urine sample or by calculating the albumin:creatinine ratio on a spot urine sample. Dip-stick tests for hematuria actually detect hemoglobin, so a positive test should be confirmed by microscopy to detect red cells. If red cells are not present in a patient with dipstick “hematuria” then this suggests overspill of “free” plasma hemoglobin into the urine. In this situation the presence of dipstick “hematuria” is not due to glomerular or urinary tract disease and may occur in conditions such as “march” hemoglobinuria and paroxysmal nocturnal hemoglobinuria.

Fig. 1.4 a Light microscopy appearances of a cross section through a normal glomerulus (large arrow) and surrounding tubular segments (small arrow; hematoxylin and eosin stain). b IgA nephropathy, the most common primary glomerular disease. The main feature is expansion of the mesangium in a proportion of the glomeruli (arrow). The diagnosis is confirmed by identifying immune complexes containing IgA in the mesangium by immunofluorescence and electron microscopy. c Diabetic nephropathy. The commonest systemic disease with associated glomerular involvement. The main distinguishing feature is the typical nodular glomerulosclerosis (arrows). (Photomicrographs courtesy of Dr. B. Young, Pathology Dept., Western Infirmary, Glasgow, UK)

The presence of proteinuria is often associated with hypertension. Depending on the severity and duration of the disease there may also be renal failure (see below). Heavy proteinuria (3 g per 24 hours) may be associated with hypoalbuminemia and peripheral edema and this triad is called the nephrotic syndrome. Identification of the nephrotic syndrome is important because the patient is at increased risk of thrombotic events, infection, and cardiovascular events.

Isolated microscopic hematuria can also be a presenting feature of glomerular disease, but other bleeding lesions throughout the length of the renal tract should always be considered (see Chapter 7).

The quantity of proteinuria, the presence of hematuria, hypertension, and renal failure, the presence of nephrotic syndrome, the presence of systemic clinical features, and the duration of proteinuria can all give clues as to the likely histological diagnosis, but there is considerable overlap between the clinical features of the many primary and secondary glomerular diseases associated with proteinuria and hematuria (Table 1.2). The commonest primary glomerulopathy in adults in the developed world is IgA nephropathy, and the commonest secondary glomerular disease is diabetic nephropathy (Fig. 1.4).

In a patient with proteinuria and hematuria the possibility of two pathologies such as glomerular disease and bladder carcinoma must always be entertained.

The kidneys have a large functional reserve, but if sufficient renal parenchyma is diseased then renal failure develops. There is no simple practical definition of renal failure. Table 1.2 shows that, with the exception of elevation of serum creatinine, the clinical manifestations of failure of most of the functions of the kidney are not specific to renal failure. For this reason renal failure is usually diagnosed and monitored by measurement of serum creatinine. A pragmatic approach is to consider all patients with a serum creatinine higher than the upper limit of the “normal” range as having renal failure worthy of investigation. In the light of the earlier discussion, however, it should be appreciated that, in a patient with low muscle mass, a serum creatinine rising within the normal range may indicate important loss of renal function (Fig. 1.3).