Schematic representation of imaging sequences Spin Echo SE and Gradient Echo GE. SE: after a 90° pulse, a second pulse (180°) rotates the transverse magnetisation by 180° about the x-axis. This 180o pulse causes the magnetisation to at least partially rephase and to produce a spin echo. Gradient Echo GRE: The echo signal is generated without a 180° pulse through gradient polarity reversal (magnetization vectors 1–3 before and after the reversal of the polarity) in the slice and readout direction

Two main types of MR (magnet resonance) artefacts are associated with metallic vascular implants: susceptibility artefacts and radio frequency (RF) artefacts (Fig. 55.2). The magnetic susceptibility of the implants perturbs the magnetic field in their vicinity. The size of the susceptibility artefacts depends on the scan sequence, the time of echo (TE) and the strength of the main magnetic field (B 0). A higher B 0 field strength and a longer TE increase the artifact size. Gradient echoes (GE) lead to larger artefacts compared to spin echo sequences (SE) [6]. The result of these artefacts is a signal void on the MRI images of the implant and the lumen in particular. The RF artefacts are caused by the distortion of the RF waves in the MR imaging process. The time-varying magnetic field component of the RF waves induces electrical currents in the loops of the metallic implant. The magnetic fields of these currents are oriented antiparallel to the B 1 field of the RF field and disturb so the uniformity of the B 1. Many vascular implants contain a great number of conducting loops causing RF artefacts in and around such implants (Figs. 55.3 and 55.4).

Comparison of Stent MRI artefacts of commercially available stents in (a) Spin Echo and (b) Gradient Echo, 0.2 T, 0.9 % saline [6] 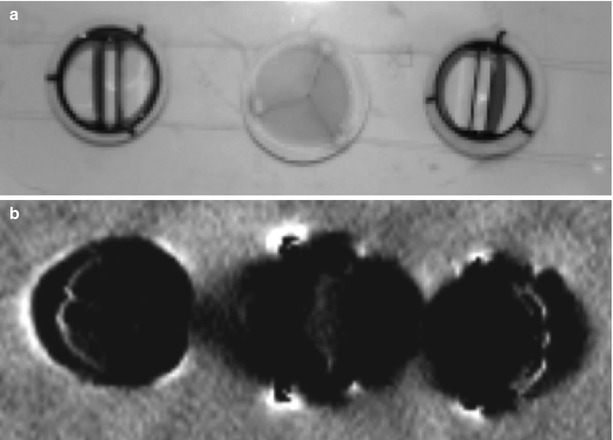 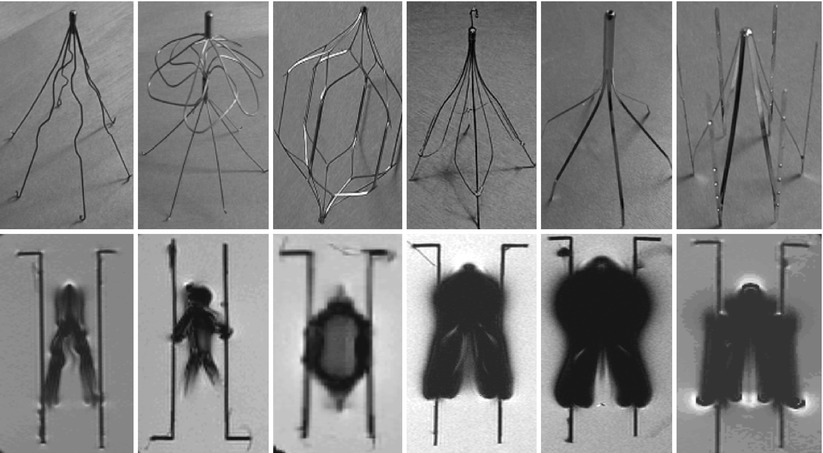 Examples of artefacts caused by commercially available vena cava filter (VCF) (from left to right: Greenfield (Titanium), SNF (Nitinol), TrapEase (Nitinol), Guenther (Elgiloy), Keeper (Phynox) and LGM (Phynox)). Sequence parameter: FFE, TR/TE = 300/11 ms, FA = 40°, MRI: 1.0 T Philips, test medium: 0.9 % saline solution at 20 °C
Minimal or no MR artifact is a precondition for follow-up examinations of implants. Appropriate visualisation of vascular implants is one of the conditions for MRI guided intervention. Optimisation of vascular implants (stents, vena cava filters and prosthetic heart valves occluders), to be visualised in MRI, will improve follow-up and can reduce invasive examinations. RF shielding taken place in the lumen of the implants made of low-artifact materials that produce minimal susceptibility artefacts by its metallic cage-like construction (stent, occluder, valves or VCF) can be overcome by integration of electric resonant circuits in the implants. This technology is described in the following sections.

There are a few ways to improve the MR imaging of implants: (1) use of nonconductive materials or (2) use of non-magnetic metals with low susceptibility. This avoids the Faraday cage effect (RF artefacts) and susceptibility artefacts. Non-metallic implants would eliminate the imaging problems that derive for the artefacts. However, the mechanical strength and biocompatibility characteristics of polymers or ceramics are not yet adequate for vascular implants such as stents, vena cava filter and heart valves. The RF artefacts can be reduced by minimising the amount of metal in the implants or by making the cells of the stents larger or by having fewer cells and fewer closed loops. All these solutions are limited by the need for implants like stents to have lowest possible profile and adequate stability, for example, the radial strength and kink resistance. The other way to improve the visibility of the implants is to modify them with resonant circuits tuned to the Larmor frequency of the MRI scanner. The Larmor frequency is defined by Eq. 55.1:

(ωL = γ · B0 γ = 42.58MHz/Telsa, gyromagnetic coefficient55.1)
The resonant circuits (resonators) inductively couple with the sending and receiving coil of the MR. The coupling leads to an increased signal intensity inside the implant or in close proximity thereby enhancing the contrast to the surrounding tissue and improving the MR visualisation of the vascular device (Fig. 55.5). 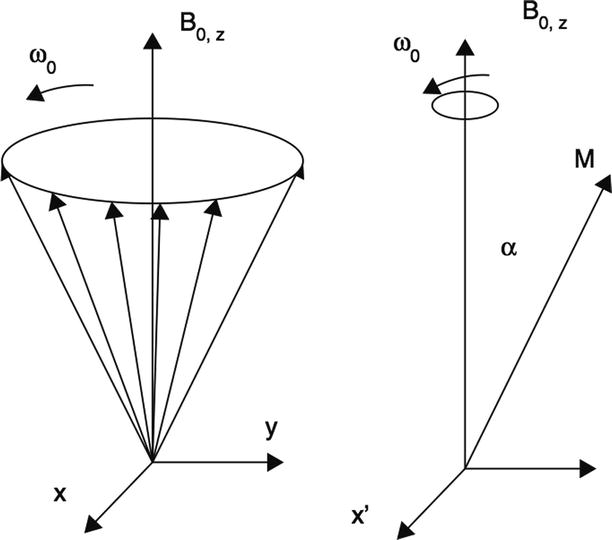 For the cases of a nonconstant B 1 field, α can be expressed:

For example, the RF pulse required for α = 90° is called 90°-pulse (t90°).
The disturbed thermal equilibrium in a probe in a magnetic field is re-established after a finite time interval. The nuclei return to the equilibrium because of losing their energy by emitting electromagnetic radiation and by transferring energy to the lattice or between themselves. This process is called relaxation. During the relaxation, which commences at the termination of the RF pulse, the both components (the longitudinal M z and the transverse M xy magnetisation) of the net magnetisation return to their equilibrium valves.
If the resonance frequency of the LCR circuit is equal to the Larmor frequency of the MR scanner, the RF-pulse induces a voltage in the coil of the resonator. The induced voltage produced in the coil of the resonator is a local magnetic field. The shape of this field is depended on the geometrical shape of the coil. The magnetic field of the resonator superposed the MR-field and the spins (in the area of the resonator) get a higher flip angle (FA).

(55.2)
The contrast of the MRI increases. The signal enhancement depends on the quality factor (Q-factor) of the resonant circuit.

(55.3)
Only small FA should be used in the sequences with the resonator. In the case of the very high Q-factor, the spins can get the FA which are higher than 90°. The signal enhancement of the resonator in the MRI depends on the position of the coil in relation to the RF-field and the Q-factor of the resonant circuit. The Q-factor of the resonant circuit is proportional to the root of the inductance and inversely proportional to the resistance and to the root of the capacitance of the circuit. That means that the signal enhancement can be increased by choosing the optimal parameter of the resonator (maximal inductance, minimal resistance and capacitance). The application of LCR to vascular implants is described in the following sections.

Thirty percent of peripheral stent patients (representing ~300,000 stenting procedures p.a. worldwide) have chronic kidney disease and are at risk of acute kidney failure from treatment [7]. The imaging methods used to guide stent implantation and perform follow-up examinations (DSA, CTA) are X-ray-based and rely on the use of iodine contrast agents. These contrast agents are allergenic and nephrotoxic frequently causing acute renal failure in patients with Chronic Kidney Disease (CKD). Several studies [8–15], conclude that the incidence of contrast agent induced renal failure among these patients is between 4 and over 50 %, depending on the pre-existing level of renal dysfunction, and on whether or not they are also diabetic (about half of the patients with CKD are also diabetic).
The majority of patients with contrast-induced acute renal failure start to recover their original renal function within 3–5 days, but the resulting hospitalisation and treatment incur substantial additional health-care costs and patient burden. Six percent of such patients require renal dialysis, further increasing health-care costs and patient burden [16]. In-hospital mortality among these dialysis patients was 36 %, compared to 1 % for patients that did not suffer acute renal failure. 81 % of dialysis patients died within 2 years.
Ultrasonography (US) is the other imaging method not requiring the use of contrast agents. However, US is highly operator-dependent and technically challenging, especially for arteries above the groin. US provides basic hemodynamic assessment but cannot visualise and diagnose restenosis or thrombosis inside the stent (due to sound scattering and reflection).
Intravascular ultrasound (IVUS) (and similarly Optical Coherence Tomography, OCT) provides high resolution, endovascular images of stents, visualising malapposition and intimal hypoplasia. However, IVUS is invasive and still requires X-ray/contrast to position the probe inside the patient.
Non-contrast enhanced (NCE) MR Angiography (MRA) would provide a safe and highly effective imaging technique for all patients; unfortunately, all existing peripheral stents render MRA ineffective for planning or follow-up examinations due to the image distortions (“artefacts”) [17]. The patient is followed up to check that the intervention has been a successful and to detect subacute and chronic complications, e.g. instent restenosis, in-stent thrombosis and stent fracture. The follow-up regime varies but might include check-ups at 6 months, 1 and 2 years. In some cases (e.g. critical limb ischemia), follow-up may be required every 6 months [18]. In addition to scheduled follow-up, an examination will also be performed if the patient is symptomatic. Invasive imaging techniques as in (a) above may be used, and currently, DSA and IVUS are the only methods for visualising substrates inside the stent, e.g. thrombosis or restenosis. US and MRA imaging of a stent bring some limitations due to the scattering and sound reflection in the former and artefacts in the later US is only applicable to peripheral vasculature. In MRI RF shielding and artefacts are caused by the metallic structure of the stent as the main problem for MR which can be overcome by resonant circuits. In 1997 MR Enhancing stents were developed [19] and copper-based early prototypes studied in Chinchilla rabbits over 7 months [20, 21] and later reproduced by Quick et al. [22] and tested in porcine animal trials.
The resonator was applied as a supplementary tube and directly mounted onto Nitinol self-expanding stents and tuned to the Larmor frequency of the MRI scanner. Additionally, the lumen of the stent was partially filled with a thrombus of porcine blood (in-stent thrombosis) and the other with a section of a porcine aorta wall to simulate intimal hyperplasia and imaged in 1 and 1.5 T (Figs. 55.7 and 55.8). 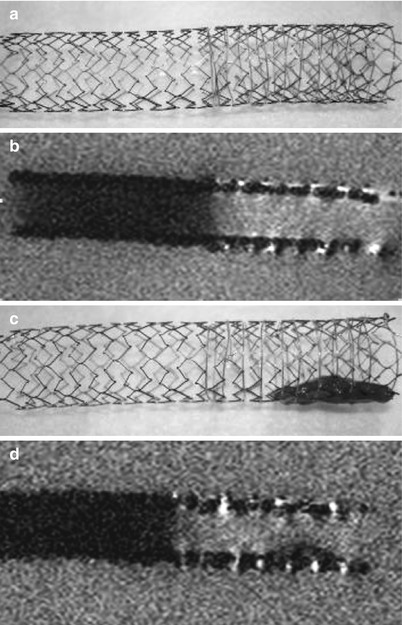 (a) 10 × 80 mm self expanding nitinol stent with resonant circuit on right half, (b) MR image below; (c) and (d): same stent with fresh human blood thrombus placed in the section of the stent with the resonator. The MR image reveals the mixed structure of the fresh thrombus due to signal inhomogeneity (Philips 1,5 T, head coil, FFE, TR = 50 ms, TE = 6 ms, FA = 10°, 0.9 % saline)

(a, b) MR enhancing self expanding Nitinol stent with fresh porcine aortic wall inside to mimic in-stent restenosis. The nitinol stent with the resonator outer sleeve was MR imaged (Philips 1.5 T, head coil, FFE, TR = 50 ms, TE = 6 ms, FA = 20°, 0.9 % saline) the profiles (purple lines) reveal the significant signal intensity change of the tissue and the enhancement of the saline solution (a = transverse view and b = sagittal view)

Biocompatible balloon expandable MRE stents have been developed with the inductivity integrated into the design of the implant. These stents have been tuned to the resonance frequency of 1.5 T (about 64 MHz) and were used in acute animal trials on 40–60 kg domestic pigs approved by the IRB of University Essen, Germany.
Under general anaesthesia, a carotid artery port was implanted and the stents delivered in left and right iliac arteries under fluoroscopy. Subsequent MRI examination was performed in 1.5 T (see Figs. 55.9 and 55.10). In the first animal, a signal void was discovered in the left iliac stent which proved to be a thrombus clot on post-mortem explanation of the stent (Fig. 55.10). The animal series was continued and the stent patency was assessed via MR (1.5 T Siemens Magnetom Avanto, TrueFisp, TR 48 ms, TE 1 ms, 2D, FA 15°) after 28-day survival time. The MR enhancing stent allows the detection of in-stent thrombosis and intimal hyperplasia (see Fig. 55.9b).