Vascular diseases of the lung may affect arteries, veins, and/or capillaries. They are primarily evaluated using modalities such as echocardiography, contrast-enhanced CT, or conventional angiography, but in selected cases, HRCT may give an insight not provided by other imaging studies.

Pulmonary hypertension (PH) may be seen with a variety of diseases that affect the lung parenchyma, pulmonary arteries, pulmonary veins, and heart. While pulmonary artery (PA) pressures cannot be directly estimated using HRCT, it may show signs that suggest the presence and relative severity of PH (Table 7.1).

Enlargement of the Main PA

Main PA diameter correlates with the presence or absence of pulmonary arterial hypertension. This correlation is significantly more accurate in patients without parenchymal lung disease than in those with lung disease.

PA diameter should be measured perpendicular to the long axis of the vessel. This may be challenging using HRCT with spaced sections. The threshold above which PH can be said to be present varies in the literature. A threshold diameter of 3.3 cm is relatively specific for this diagnosis. The PA should also be smaller than the adjacent aorta (Fig. 7.1).

Right ventricular (RV) size may be difficult to assess on HRCT images obtained without contrast injection; however, in many cases the location of the interventricular septum may be estimated even on non-contrast images (Fig. 7.2). The transverse diameter of the RV should be less than the left ventricle. PH is a common cause of RV enlargement.

In the setting of PH, the right atrium (Fig. 7.3), superior vena cava, and inferior vena cava are often enlarged due to tricuspid regurgitation. The size of these structures can usually be determined on non-contrast images. There are no specific size thresholds to use, and enlargement is mainly determined by reader experience. These signs are the least specific for PH as enlargement may be caused by multiple other etiologies.

Table 7.1  HRCT findings that may be associated with pulmonary hypertension

Enlargement of the main pulmonary artery 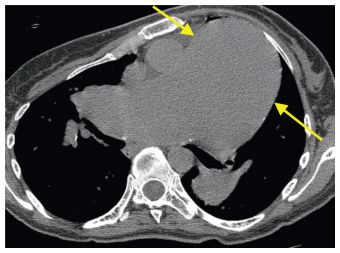 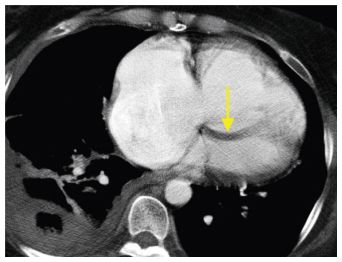 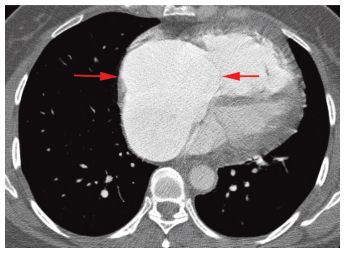 Right atrial enlargement. The right atrium (arrows) is markedly dilated in a patient with idiopathic pulmonary arterial hypertension. This finding is often due to tricuspid regurgitation resulting from dilatation of the right ventricle. 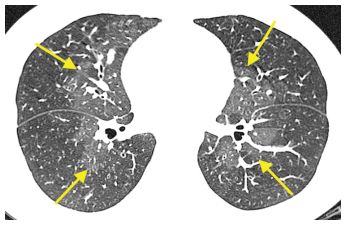 Mosaic perfusion. Heterogeneous lung attenuation is present with peripheral lung appearing decreased in attenuation and central lung regions (arrows) appearing to be of increased attenuation. In this case, the lower attenuation lung is abnormal, resulting from decreased perfusion due to vasculitis.

Centrilobular nodules are not specific for a vascular etiology as they may also be seen with pulmonary edema or hemorrhage (Fig. 7.6) of any cause and airways diseases such as hypersensitivity pneumonitis. In a patient with known PH, however, they are likely due to the vascular disease.

The differential diagnosis of PH is very broad (Table 7.2). HRCT may be obtained in the diagnostic evaluation of a patient with PH of unknown cause. One major role of HRCT in this setting is the detection of diffuse lung disease, primarily emphysema and lung fibrosis. Contrast-enhanced CT may also be obtained to evaluate for chronic pulmonary thromboembolism (CPTE). 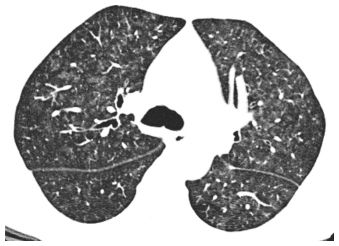 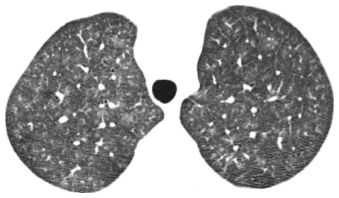 Centrilobular nodules of ground glass opacity. The nodules in this patient represented pulmonary hemorrhage due to systemic lupus erythematosus. Nodules of this type commonly have causes other than pulmonary hypertension. These include edema and hemorrhage unrelated to pulmonary vascular disease, hypersensitivity pneumonitis, and respiratory bronchiolitis.

There are many causes of PH that are not well evaluated using HRCT. These are unified by a relative lack of lung abnormalities or the presence of nonspecific lung findings. Examples include systolic or diastolic left ventricular dysfunction, valvular heart disease, cardiovascular shunts, hypoventilation disorders, and sleep disorders. The discussion of specific diseases associated with PH will be restricted to those that commonly show lung abnormalities on HRCT (Table 7.3). 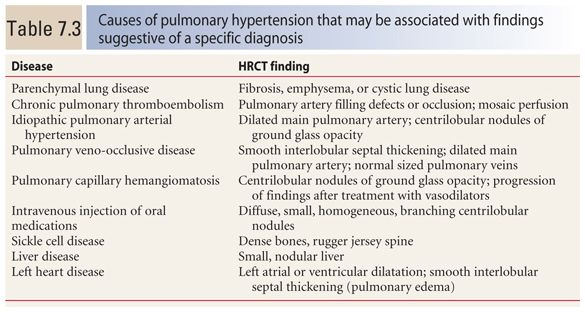 PH may result from parenchymal lung disease because of hypoxia (with vasoconstriction) or obliteration of the pulmonary capillary bed. The most common lung parenchymal processes to result in PH are emphysema (Fig. 7.7A, B) and diffuse lung fibrosis (Fig. 7.8A, B). Cystic lung disease is a rare cause of PH.

Lung fibrosis causing PH is most commonly due to idiopathic pulmonary fibrosis, connective tissue disease, or sarcoidosis. Chronic airways disease, such as cystic fibrosis, and cystic lung disease, such as lymphangioleiomyomatosis or Langerhans histiocytosis, may also be associated with PH. As lung disease associated with PH is typically extensive, it should be evident on HRCT. The lack of significant abnormality on HRCT makes a lung etiology of PH unlikely. In general, the severity of lung disease correlates with the degree of PH.

Sarcoidosis and connective tissue disease– related interstitial lung disease (Fig. 7.9A–C) may show PH disproportionate to the extent of lung disease. In these cases, vasculitis, thrombosis, stenosis, or occlusion of small pulmonary arteries likely contribute. Of note, in the presence of lung disease, there is a poor correlation between main PA diameter and the severity of PH. This is in contrast to IPAH and other diseases without significant lung manifestations in which pulmonary arterial diameter shows better correlation with the presence and severity of PH. 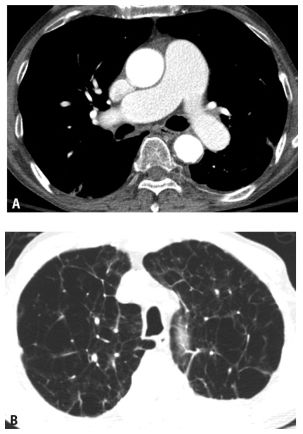 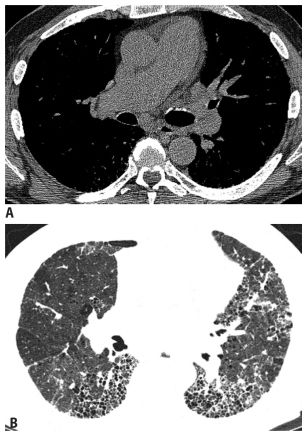 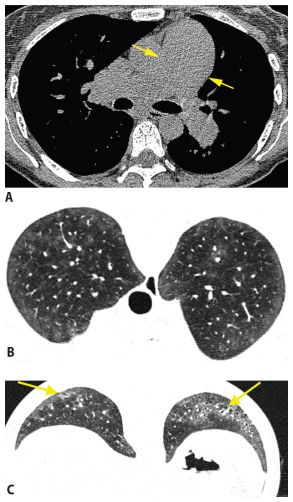