where (1−νx e 1−(νx/c)) = 0 for x > c/ν, D(x) is the dose rate at distance x from the source, ν is the absorption coefficient, k is a normalisation constant, c is a dimensionless parameter.


Due to the penetrating nature of X-ray and gamma photons, as in classical radiotherapy, an irradiation of skin tumours often requires many sessions, and imparts a non-negligible dose to underlying tissue, so increasing the possibility of long term after effects. The electrons from high energy (>1 MeV) beta emitters isotopes deposit more than 90 % of the dose in the first two mm of the skin, which is the depth usually interested from tumour invasion, but spare the irradiation of deeper tissue. Typical real case dose absorption curves in human tissue for the beta emitter 188Re are reported in the Fig. 1.

7 Patient Preparation Before the Treatment

The application of the product must be preceded by an accurate cleaning and curettage of the lesions. This treatment is useful not only for more precisely delineate the borders of a tumour, but also to eliminate all the keratinic crusts, granulation tissue, scabs, that, due to their thickness, would stop the beta particles irradiation.
Both BCC and SCC appear often ulcerated, with presence of serous and blood scabs. In other cases keratin plaques or nodules of horny consistence are present; in all cases an accurate and complete preliminary elimination of this material must be performed. A softening of the scab with saline helps in the removing; in some regions, like vulva or penis lesions, a local anaesthesia before removing is advisable.
If, after the removal of the scab, an haemorrhage arise, an haemostatic agent must be applied on the lesion, to completely stop the bleeding.

8 Application of the Product

The area to be treated is outlined by using accurate visual examination and dermoscopic epiluminescence; the irradiation usually includes both the area of evident infiltration, and the area in which a neoangiogenic development is present; a border of some mm of apparently health tissue around the lesion is also usually included in the irradiation area, especially if a possible invasion is suspected. The clinical practice has showed that the inclusion of a border of 2–3 mm beyond the visible invasion and neoangiogenic development is, in most cases, sufficient to assure a selective irradiation in most cases. The surface to be treated is outlined by a dermographic pen, and the drawing is transferred on a transparent thin plastic sheet settled on the lesion. A simple and effective method for the determination of the area is performed by laying down the transparent sheet on a graphing or millimeter paper, and counting the square millimeter inside the outlined area.
The whole surface of the skin to be treated is protected by uniformly spreading it with a layer of a special gel cream (about 10 μL/cm2) and/or with an uniform thin plastic foil, in order to prevent a possible contact of the epidermis with the radioactive matrix. The radioactive product Re-SCT™ has a uniformly distributed and certified radioactivity, and must be homogeneously applied above the protection layers, by covering all the previously outlined area. The application of the product on the skin was performed by the use of a shielded dedicated applicator (Fig. 2). 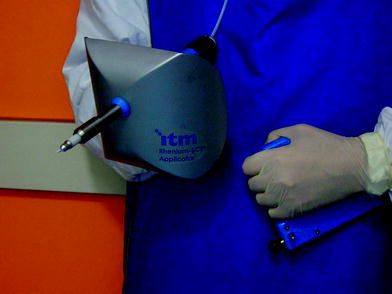 Shielded device for the application of the radioactive beta emitter matrix on the tumour lesion
A Perspex screen 10 mm thick is sufficient to protect the physician face from β radiation during the phase of product application to the patient, typically lasting from 30 to 120 s. During the irradiation, typically lasting from 15 min to 1 h, the patient is kept isolated. If an irradiation on the nose, or near the eye, is performed, the patient wears a pair of lead or polymethylmethacrylate spectacles, for crystalline protection. After the required irradiation time, a radioactivity test is performed on the treated lesions; in all cases a total absence of any measurable contamination has been always demonstrated.
The dose to the hands of medical personnel during the application was always found within acceptable levels (<2 mSv).
The radioactive mould is kept on the lesion for the time necessary to impart the calculated dose distribution.
For each lesion, the dose distribution only depends from the initial radioactivity, surface of the lesion and contact time. For each patient and for each lesion, the dose-distribution curve is calculated (the matrix and protection layers thickness are also taken into account for self-absorption effects) by using a point source real-time integration software program. Clinical practice has demonstrated that mean doses of 40–60 Gy to depths of 300–600 μ from the epidermis (the exact value depending on histological indications and site of the tumour) are effective for high cure rates. A dose of 50 Gy to 300 μ has been used in lesion of genitals, lips and mouth; 50 Gy to 400 or 500 μ was the standard dose used for most of the BCC and SCC lesions, 50 Gy to 600 μ was the dose used in thick tumours.
At the end of the irradiation, the radioactive mould was easily removed, by using a specially designed dedicated remote tongs device, and is discarded.

9 Typical Clinical Results After the Treatment

Immediately after the treatment it is visible a faint reddening of the treated area. After a few days, a variable erythema is present, sometimes with emission of serum, and a crust or scab is formed. An apparent worsening of the aspect of the lesion is often observed, with the appearance of a light burn, but the bleeding, often present before the therapy, usually disappears. After 40–120 days the erythema fades, sometimes a second scab is formed, and itch is sometimes present; the clinical healing is more clearly apparent, the tumour neoangiogenic development, often clearly visible with dermoscopic epiluminescence before the treatment, starts to disappear. After 60–180 days, in most of the cases, an apparent clinical healing is present, rarely with persistence of a scab (Sedda et al. 2007); the lesion area become paler than the untreated skin, and the tumour neoangiogenic development disappears.
More than 350 patients (for a total of more than 1200 lesions) with histologically or clinically confirmed diagnosis of BCC and of SCC have been up today successfully treated. In most of the treated cases, an apparent clinical remission occurred after 3–9 months. After a follow up of 12–78 months, a complete response was obtained in 98.5 % of the treated lesions, in 89 % of the lesions after a single application. In such cases, when a histological examination was performed, a complete tumour regression was observed. In 11 % of the patients, two to three treatments were applied. In half of these cases the second treatment was applied on lesions contiguous to the treated area, or to the border of the previously treated lesions; in such cases the evaluation of the area interested from the tumour invasion has been likely underestimated.
In some cases, thicker tumours generally required two or even three treatments (i.e. keratoacanthoma or thick nodular BCC), as was easily foreseen by purely dosimetric considerations. In a limited number of cases multiple treatments (maximum three) on the same area have been found necessary for a complete healing; possible reasons should be a greater radio-resistance of the tumour cell line, or a protective effect of the melanin (pigmented BCC). Neither un-aesthetic scars, nor side effects, were generally observed. The 1.5 % of the cases in which a complete healing has not been reached, were mainly old, inoperable patients in which a deep tissue invasion was present, and that have been enroled only as compassionate cases. Some examples of obtained clinical results are reported from Figs. 3–12.

Ulcerated BCC of the scalp, and 382 days after a single treatment