The superficial position of the transplant kidney is particularly advantageous when imaging with ultrasound, and indeed a significant amount of useful information can be gleaned in terms of structure and function using a combination of gray-scale and color Doppler ultra-sound. The use of a 4-MHz probe gives ideal resolution of the transplant kidney itself and, with the use of color Doppler, the main transplant renal artery and vein, can normally be followed back to their origins from the external iliac artery and vein, respectively. These qualities make ultrasound well-suited for imaging the patient in the early transplant period, where color Doppler gives an overview of overall renal perfusion and with the use of spectral Doppler can perform serial measurements in an effort to delineate an improving or deteriorating situation. In addition, it can easily detect perirenal collections and is an excellent detector of significant hydronephrosis. Apart from the early period, its main use is in the detection of renal artery stenosis (RAS), although it can clearly detect other more chronic complications such as arteriovenous fistula (AVF), long-term hydronephrosis, etc. (see Chapter 5, Renal Transplantation, for details).

Given the improvements in image quality in the last decade, it is difficult to perceive of situations when the use of a microbubble contrast agent may be useful in the transplant kidney. However, many questions remain unanswered with conventional imaging and, although it is fair to say at present there is no definitive renal transplant application, a number of workers are beginning to take preliminary steps to see if functional imaging can be of clinical use, not just in the native kidney but also within the renal transplant.1,2,3 The techniques of functional imaging are essentially as described for the native kidney in the earlier part of this chapter. The technique itself depends upon multiple factors and, as this work is very much in its preliminary stages, much regarding this technique remains to be standardized.

The potential applications of these microbubble agents are discussed below.

It is well-recognized that many “normal” transplant kidneys may have some element of hydronephrosis. In the early transplant period approximately 35–40% of kidneys suffer from delayed function and as such it is difficult to know whether these mild hydronephroses are functionally significant or not. It has already been demonstrated in animal studies that by inducing obstructive hydronephrosis and increasing intrarenal pressure, following intravenous injection of a contrast agent the time-intensity curve is altered in those kidneys with severe acute obstruction.4 Whilst the clinical situation is slightly different in the transplant kidney, this may be one potential application of this technique.

One of the main difficulties in patients with delayed function is not knowing whether this reflects acute tubular necrosis (ATN) or acute rejection. As symptoms are generally absent, the diagnosis is clinically very difficult; in our center we perform routine monitoring with spectral Doppler ultrasound every second day until function begins. Decision-making is based upon the principle that if the Doppler spectral waveforms deteriorate, then this is likely to initiate earlier transplant biopsy. However, should the waveforms remain fairly stable over a period of time, then in general transplant biopsy is delayed. If a diagnosis of acute rejection is made on biopsy, then further monitoring following treatment is also performed to monitor treatment response.

This type of monitoring can be useful clinically but is not perfect and indeed there is some element of interpretative subjectivity involved. In addition to ultra-sound, some centers still perform nuclear medicine studies in the early transplant period to help assess vascular function.

It is now possible to give an intravenous injection of microbubble contrast agent and produce a very similar time-intensity arterial curve to that obtained at diethylene triamine pentaacetate (DTPA) renography and essentially show the same information as the isotope study,5 with the added benefit of the gray-scale anatomical picture and quantitative spectral Doppler measurements. It is too early to say whether this will have any significant effect on prognosis. However, this method is an entirely “nonradioactive” way of producing anatomical and functional information (Figs. 17.1, 17.2). 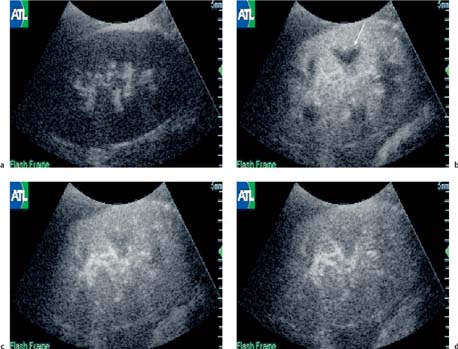 Fig. 17.1 A series of still images taken from a dynamic study of a transplant kidney following the intravenous injection of the microbubble agent Sonovue. This study was conducted in the early postoperative phase, as the kidney had delayed function. a The baseline scan prior to contrast injection. b Shortly after injection, showing good cortical enhancement highlighted against the darker pyramids (arrow); c,d Later images which show an even distribution of contrast in both the cortex and pyramids

It is too early to determine whether there is “hidden information” in the curves that may help differentiate ATN from acute rejection or even that they may contain some prognostic information for the longevity of the transplant. In one study differences in time to peak enhancement values and wash-in and wash-out curves were noted between normal transplant kidneys and those with a parenchymal insult, i. e. ATN or acute rejection. In addition, heterogenous enhancement of cortical contrast was noted in the latter group.6 Furthermore, it is also possible with this dynamic method to calculate an arterial venous transit time; this again is a topic of clinical research rather than application.

Tags: Ultrasound of the Urogenital System
Jan 14, 2016 | Posted by admin in GENITOURINARY IMAGING | Comments Off on The Transplant Kidney
Premium Wordpress Themes by UFO Themes
WordPress theme by UFO themes