Flow velocity waveforms are obtained from the ascending main branch of the uterine artery on the right and left side of the cervix in a longitudinal plane before it enters the uterus. The ‘gate’ of the Doppler is positioned when the vessel with good colour signals is identified on the screen. The PI and RI of the uterine arteries were calculated electronically when three similar, consecutive waveforms of good quality were obtained.
Good uterine blood flow as shown by low PI or RI is correlated with successful IVF outcomes [12, 13]. Steer et al. [12] classified PI measured on the day of ET as low, medium and high in the ranges of 0–1.99, 2.00–2.99 and ≥3.00, respectively, and reported a 35 % implantation failure when PI was >3.0. Using a PI upper limit of 3.0 [12] or 3.3 [13], the uterine Doppler flow indices have a high negative predictive value and sensitivity (in the ranges of 88–100 % and 96–100 %, respectively) and a relatively higher range of positive predictive value and specificity (44–56 % and 13–35 %, respectively) when compared with endometrial thickness and pattern [5].
Uterine artery Doppler study may not reflect the actual blood flow to the endometrium as the major compartment of the uterus is the myometrium and there is collateral circulation between uterine and ovarian vessels. I have shown 2D Doppler study of uterine vessels is a poor reflection of subendometrial blood flow by 3D power Doppler in both stimulated and natural cycles as endometrial and subendometrial 3D Doppler flow indices were similar among patients with averaged uterine PI <2.0, 2.0–2.99 and ≥3.0. [14].

Endometrial and subendometrial blood flow examined by colour (Table 3.1) and power Doppler (Table 3.2) was correlated with implantation or pregnancy rates during IVF treatment. 2D Doppler flow indices of spiral arteries such as PI and PSV are not predictive of pregnancy [8, 19, 22], although Battaglia et al. [16] and Kupesic et al. [23] found significantly lower spiral artery PI in pregnant cycles than nonpregnant cycles.

USS ultrasound, PI pulsatility index, PSV peak systolic velocity, OR oocyte retrieval, ET embryo transfer
Yang et al. [18] used a computer software to measure the area and intensity of colour signals present in the endometrium in a longitudinal axis, i.e. intraendometrial power Doppler area (EDPA). Significantly higher EDPA was found in pregnant cycles than nonpregnant cycles (8.8 mm2 vs. 5.8 mm2 respectively). Patients with EDPA <5 mm2 had significantly lower pregnancy rate (23.5 % vs. 47.5 %; P = 0.021) and implantation rate (8.1 % vs. 20.2 %; P = 0.003) than those with ≥5 mm2. Contart et al. [20] graded endometrial blood flow by the visualisation of power Doppler in the quadrants in the fundal region of the transverse plane but could not demonstrate any predictive value of such grading system.
Presence of endometrial and subendometrial blood flow can be identified easily in 2D Doppler ultrasound. Absent endometrial and subendometrial blood flow has been shown to be associated with no pregnancy [16, 22] or a significantly lower pregnancy rate [17, 21]. 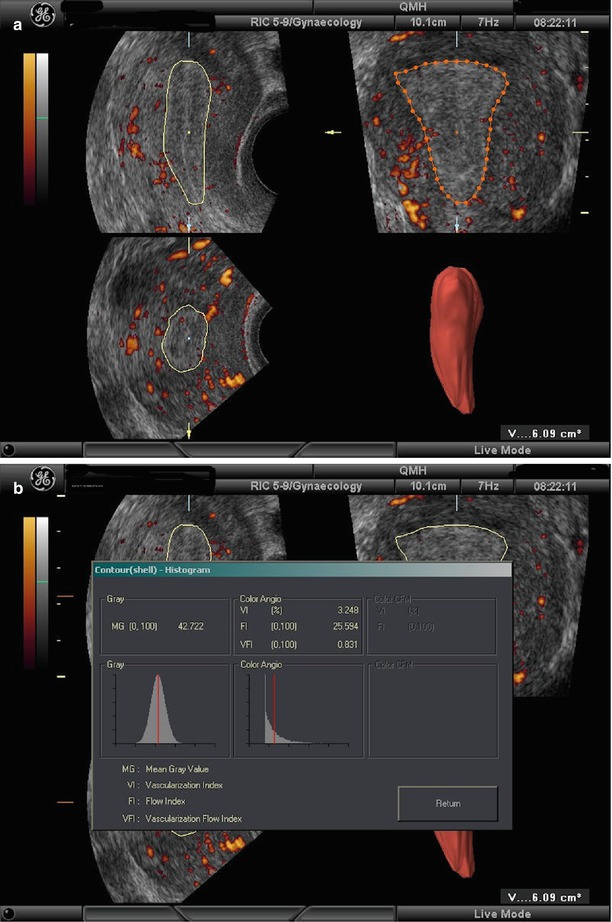 Endometrial volume (a) and blood flow (b) measured by 3D Doppler ultrasound
The subendometrium can be examined through the application of ‘shell imaging’ which allows the user to generate a variable contour that parallels the originally defined surface contour. The VI, FI and VFI of the subendometrial region are obtained accordingly (Fig. 3.3). The intra-observer reliability and interobserver reliability of endometrial and subendometrial blood flow by 3D power Doppler have been confirmed to be high with all measurements obtaining an intra-class correlation of above 0.9 [25, 26]. 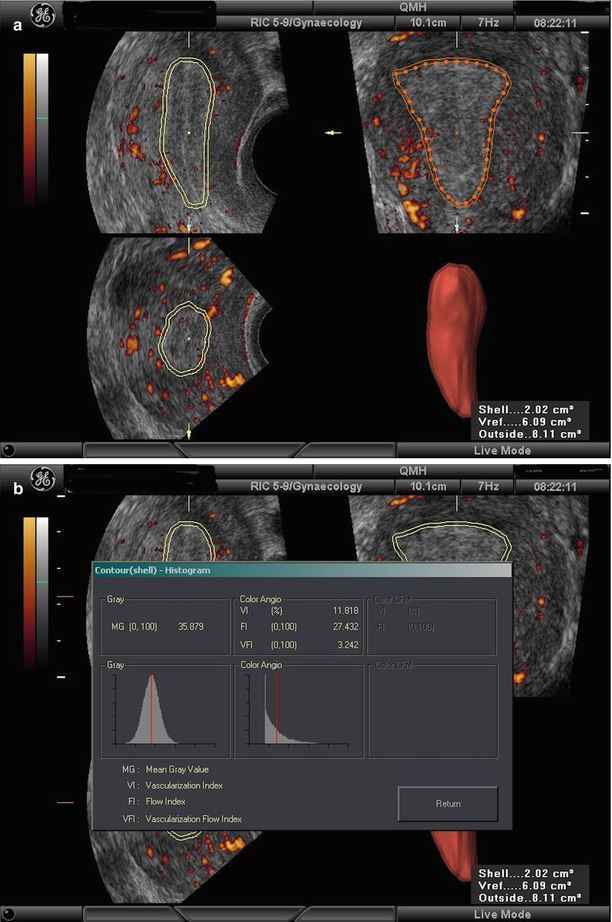