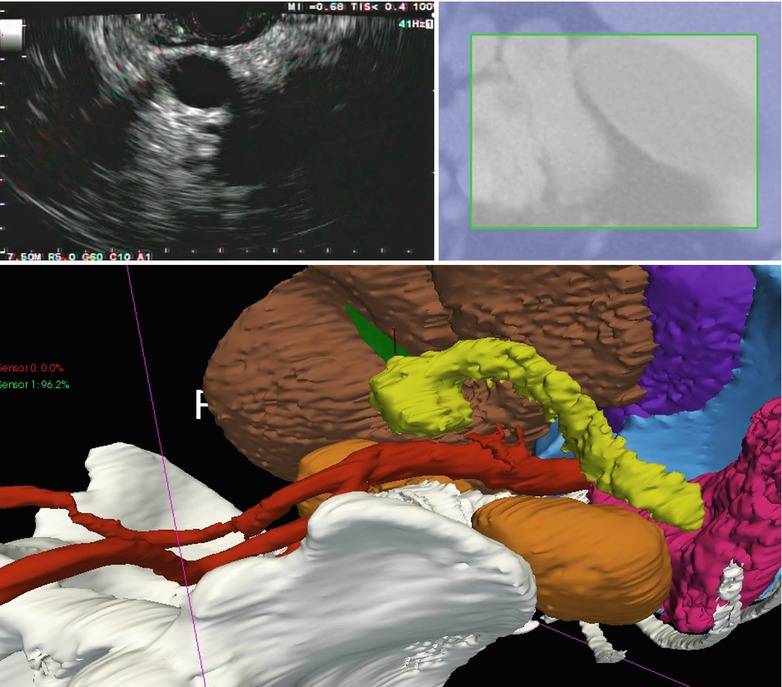 IRGUS system display. The pancreas (yellow) and left kidney are shown in the ultrasound plane (top left) and the cropped preoperative CT (top right). Bottom, 3D view of the patient anatomy with the EUS probe shown in blue and black and the ultrasound plane shown in green, close to the pancreatic tumor
Results and Discussion
In the 5-min timed trial, both novice and expert endosonographers were able to locate and identify roughly twice as many abdominal organs and landmarks when using IRGUS compared with conventional EUS. Novice structure identification improved uniformly, except in respect to the right kidney, for which there was no improvement, with 40 % of users correctly identifying the structure with both EUS and IRGUS. The most significant improvements for experts were in identifying the porcine pancreatic tail and the right lobe of the liver; however, there was substantial improvement in identification of all structures. With IRGUS, users were also more accurate in structure identification (Table 8.2). For novices, the mean score with EUS was 0.29 versus 0.51 with IRGUS (P = .02). For experts, the score was 0.71 versus 0.80 (EUS vs IRGUS, respectively; P = .03)

In the EUS timed trial, a novice had a 46 % probability to label a requested target by using EUS, with a 64 % accuracy (64 times of 100, this answer is correct). In contrast when using IRGUS, the probability of labeling a target increased to 58 %, with 100 % accuracy (P = .01). The experts had a 71 % probability to label a requested target when using EUS, with 86 % accuracy. In contrast when using IRGUS, this probability increased to 91 %, with 100 % accuracy (P = .004). The difference between novices using IRGUS and experts using simple EUS was not statistically significant (P = .32), which indicates that IRGUS closes the performance gap between experts and novices. The kinematic evaluation for the IRGUS versus EUS systems showed overall improvement in efficiency of examination with IRGUS, with score improvements that ranged from 17 to 27 % (Fig. 8.2). All users reported that the displays of (1) global position and orientation and (2) CT-US slice comparison were naturally intuitive and greatly facilitated target identification and probe positioning. All IRGUS users also reported that the tracker system gave additional confidence in image interpretation. In this case study, IRGUS operators identified anatomic features and navigated in the body more confidently than with conventional EUS. Compared with EUS, IRGUS provided more efficient scope movement and enabled users to more easily identify and distinguish between structures, such as the right and left lobes of the liver. The performance of both novices and experts improved with IRGUS in terms of structure identification and kinematics.

Comparative scores for various kinematic factors for EUS and IRGUS, showing that the kinematics of IRGUS users was favorable for the parameters measured. The asterisk denotes that the difference between the 2 groups is statistically significant at the level of P < .05
Case Study 2
To Evaluate Expertise of Colonoscopists Using a Robotic-Based Dexterity Metric, the Global Isotropy Index [ 15]
We consider here the development of a composite metric to better differentiate classes of operators, that is, to separate “novice” from “expert” classes. This will enable training to proceed with more confidence. In this case study, we have utilized the Global Isotropy Index (GII) to quantify the expertise of the operator.
Material and Methods
The experimental setup consisted of a pediatric colonoscope equipped with four electromagnetic 6-DOF position sensors, as shown in Fig. 8.3. Male and female patients scheduled to undergo screening colonoscopy were enrolled in the research study. The effective sensor workspace covered the entire abdomen. Data are captured in real time starting from the insertion of the colonoscope into the anus and ending with the completion of the colonoscopy. Only the insertion phase of the procedure is analyzed since it is more difficult to insert a hyperflexible tube into the colon than to retract it. 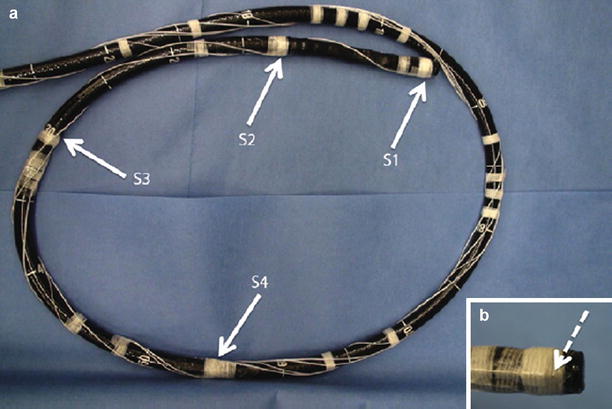 (a) Colonoscope showing the position of sensors 1, 2, 3 and 4. (b) Magnified view of the colonoscope tip showing the sensor attachment
The colonoscope is modeled as a set infinitesimal rigid links along a backbone curve defined in terms of the Frenet-Serret frame. The curve is represented in the parametric form,

, where σ is the parameter which represents the curve length and t is the time. The Frenet-Serret frame is defined at each point p(σ,t) along the backbone curve and consists of the tangent

vector at point p(σ,t), as shown in Fig. 8.4. Each segment of the colonoscope can be considered to consist of two rotational joints and a prismatic joint. The joint angle vector can be written as

, and the translational vector can be written as

, where l x is the extension of the length of the colonoscope, ς is the curvature, and τ is the torsion.

Model for colonoscope
At any point

, the local frame with respect to the base coordinates

can be defined as

of a point on the curve relative to the origin

for a joint in the local Frenet-Serret frame with respect to the base frame can be derived as continuum extension for rigid link robots. Using the standard robotic terminology, the Jacobian operator can be defined as

The colonoscope is considered to consist of three segments, defined by the four attached sensors placed along the colonoscope. For each segment of the scope, we assume that the consecutive sensors represent the base- and end-effector coordinates of the segment and solve the inverse kinematic problem to evaluate the configuration q = (σ, ς, τ) of the scope. We then solve the inverse kinematic problem to determine the configuration of the scope for a given set of base- and end-effector coordinates. The problem is formulated as a dynamical problem requiring only the computation of the forward kinematics, as determined by (8.2). The Jacobian matrix J(σ,t) relates the end-effector frame forces f to the corresponding joint torques τ, as given by the following equations

(8.4)
The Global Isotropy Index (GII) [52] was proposed to define the force isotropy throughout the workspace. The GII is used in this paper to define a global metric for evaluating the expertise of the clinician in actuating the distal end of the scope from the proximal end. The GII is defined as

are the minimum and maximum singular values of the Jacobian. GII is a global variable which determines the isotropy or the uniformity of the force transmitted to the distal end from the proximal end. Since the goal of colonoscopy is to uniformly transmit forces to the distal end of the scope, GII provides a metric for the expertise in manipulating the distal end of the scope while minimizing the amount of flexing caused due to excessive curvature in the scope. It is a stringent metric which quantifies the worst case performance of the user. Often this is the point at which the expert proctor takes over the procedure from the novice.
Results and Discussion
Five experts and four novice GI endoscopists (second- and third-year resident physicians) were recruited for this study. Thirteen screening colonoscopies were performed by the group (8 by experts and 5 by novices). All the colonoscopies were successful, leading to intubation of the terminal ileum. The positions of the 4 sensors were recorded, and the insertion and retraction phases of the procedure were tagged. Figure 8.5 shows the trajectory of sensor 2 for a novice and expert trial. Several kinematic parameters were computed from the position and orientation data and are shown in Table 8.3. The average time taken to complete insertion of the colonoscope from the anus to terminal ileum for the expert group was 564 s while the novice group took an average of 1,365 s to complete the same task. The path length, defined as the total distance travelled by the sensor, was also computed for the four sensors. In addition, a spline was interpolated between the position readings of the four sensors while maintaining the constraints of the length of the colonoscope between the sensors. The curvature of the three sections of the colonoscope was computed at each time point, based on which the mean curvature is calculated. The curvature provides insight into the amount of flexing in the scope as it is advances in the colon. At every time point, the position readings of the four sensors are also input to the continuum robot module, which calculates the configuration (σ, ς, τ) of the three segments of the colonoscope using the four sensor readings. Based on the configuration of the scope, the Jacobian of the scope and the minimum and maximum singular values are evaluated at each time point. A search algorithm obtains the minimum and maximum singular values of the Jacobian for the duration of the experiment, based on which the GII is calculated. The experimental results are shown in Table 8.3.