Vascular Abnormalities of the Liver

Vascular Abnormalities of the Liver

Overview: Portal hypertension is defined as a rise in pressure within the splanchnic venous system above 10 mm Hg. This increase in pressure may result from either increased resistance to hepatic venous drainage (presinusoidal and postsinusoidal) or increase in inflow pressure, such as is seen in persons with an arterioportal fistula.1 The pathophysiology and clinical presentation of portal hypertension depend on the underlying hepatic disorder.

Etiology: Cirrhosis, the most common cause of portal hypertension, is due to hepatic scarring resulting from chronic liver injury and is associated with deterioration of liver function. In pediatric patients, cirrhosis can result from a variety of conditions, including biliary atresia, cystic fibrosis, hemochromatosis, and Wilson disease (Box 93-1).2 The Child-Turcotte-Pugh classification system provides a severity score that plays a part in treatment decisions.3 Patients are stratified into grades A through C based on bilirubin elevation, albumin level, prothrombin time, ascites, and severity of encephalopathy.3,4

Patients with presinusoidal portal hypertension, such as extrahepatic portal vein occlusion, do not have intrinsic hepatic dysfunction. Extrahepatic portal vein occlusion is a relatively frequent cause of portal hypertension in children. It is increased in incidence in cases of complicated umbilical vein catheterization, sepsis, dehydration, hyperviscosity, shock, coagulopathy, and portal vein thrombosis, in persons with hypercoagulable syndromes (such as antithrombin III deficiency), and in persons with congenital portal venous webs, but it may occur without an identifiable cause.2,5 Cavernous transformation of the portal vein is a result of portoportal collaterals that develop along the thrombosed portal vein and that have been observed to occur in as little as 1 to 3 weeks after acute thrombus.6

Postsinusoidal obstruction includes primary liver disease with cirrhosis or hepatic vein obstruction, such as Budd-Chiari syndrome or hepatic venoocclusive disease, as seen in patients who have had bone marrow transplantation.2

Clinical Presentation: Children may present with the consequences of portal hypertension, such as gastrointestinal bleeding, unexplained splenomegaly, and hypersplenism without jaundice, ascites, or cholestasis.7,8

Imaging: Splenic enlargement may be the earliest imaging finding of portal hypertension. As resistance to portal flow increases, portal venous flow slows down, portal vein diameter decreases, and, with high resistance, portal venous flow may become reversed or even arterialized. In persons with a normal liver, the portal vein has a larger cross-sectional area than the splenic vein.8,9 If instead the portal vein is smaller than the splenic vein, the presence of collaterals diverting portal flow away from the liver must be assumed (Fig. 93-1). Reversal of venous flow in the superior mesenteric and splenic veins also is suggestive of collaterals and spontaneous portosystemic shunting. Hepatopetal flow in the main portal vein does not exclude severe portal hypertension when collaterals are present or when lobe-to-lobe shunting occurs; hepatofugal flow is a late finding in persons with portal hypertension.8,9 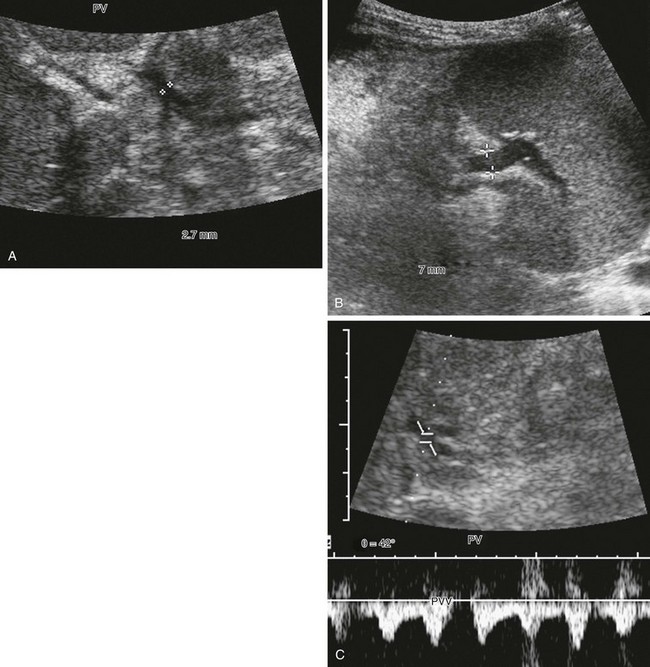 Figure 93-1 Severe portal hypertension following a Kasai portoenterostomy in a 2-year-old girl with biliary atresia. Ultrasound imaging was performed in preparation for liver transplantation.
A, The main portal vein is very small, measuring 2.7 mm in diameter (calipers). Note the heterogeneous echotexture of the liver. B, The splenic vein is much larger, measuring 7 mm in diameter (calipers). This combination alerts one to the presence of collateral veins and varices. C, Spectral Doppler imaging of the main portal vein (PV), which is reversed and arterialized, reflects severe liver disease with high resistance to flow, causing the portal vein to become a draining vein to the hepatic artery through arterioportal communications.

The presence of a patent paraumbilical vein allows decompression of portal venous flow via the left portal vein, thus allowing hepatopetal flow in the main portal vein even in the presence of extreme portal hypertension, potentially creating a misleadingly normal main portal venous flow pattern. Because the paraumbilical veins are supplied by the left portal vein, intrahepatic portal flow may be directed toward them, causing reversal of flow in the right portal vein despite hepatopetal flow in the main portal vein. The paraumbilical veins are well visualized in the falciform fossa by color and power Doppler imaging, as well as by computed tomography angiography (CTA) and magnetic resonance angiography (MRA). Hepatic decompression by those veins may serve as relative protection against esophageal varices and variceal hemorrhage.

When portal venous pressure increases in the setting of portal hypertension, splanchnic venous return finds alternative drainage pathways connecting the portal circulation to the systemic circulation. Left gastric and splenic vein branches drain into the azygos system through esophageal and gastric varices, which in turn drain into the inferior vena cava (IVC) via the left renal vein. Paraumbilical veins (Fig. 93-2) communicate with inferior epigastric and internal mammary abdominal wall venous networks to drain into the inferior and superior vena cava, respectively. These collateral pathways can be visualized with cross-sectional imaging.6 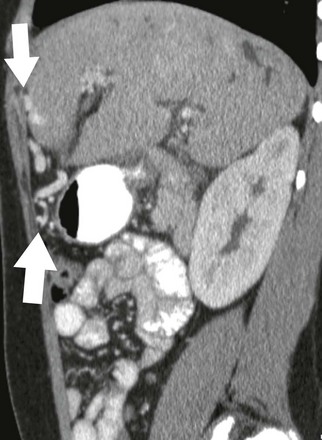 Additional collateral pathways develop with portal hypertension. Retroperitoneal and peripancreatic collaterals drain through renal and gonadal veins into the IVC and into paraspinal veins, which drain into the azygos system (Fig. 93-3). Inferior mesenteric branches drain into superior, middle, and inferior hemorrhoidal veins that lead to the iliac veins. Portosystemic collaterals also may form at enterocutaneous junctions in fistulas and enterostomies. Surgical anastomoses, such as a Roux-en-Y biliary-enteric anastomosis, may serve as sites of portoportal collaterals (Fig. 93-4). Finally, intercostal and phrenic veins also may serve as a means of portosystemic communication across the diaphragm.6

Figure 93-3 A liver transplant patient with an occluded portal vein and inferior vena cava.
A, Retroperitoneal, paraspinal, and intraspinal venous collaterals are present. The azygos and hemiazygos veins are massively enlarged (arrow). B, Extensive pancreatic (arrow) and perisplenic collaterals are present, along with a splenorenal shunt (arrowhead). 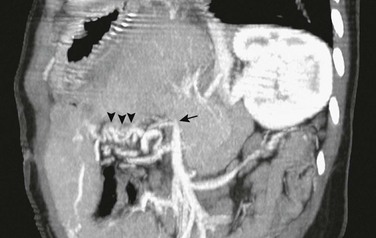 Figure 93-4 Nonacute portal vein thrombosis in an 11-year-old boy with a left lateral segment liver transplant.
An oblique sagittal reformat of contrast-enhanced computed tomography shows that the extrahepatic portal vein is occluded (arrow), and multiple corkscrew collaterals from jejunal branches of the superior mesenteric vein are seen at the Roux-en-Y loop (arrowheads) used for the biliary anastomosis. The reconstituted central portal vein was identified on other images. Capsular collaterals are seen at the inferior edge of the liver.

In patients with cavernous transformation of the portal vein, key cross-sectional imaging features include a tangle of venous channels in the liver hilum with no identifiable normal portal vein (Fig. 93-5). In most patients (76%), portoportal collaterals extend over a variable distance along the course of the intrahepatic portal branches. In extreme cases, no portal vein branches are demonstrated (Fig. 93-6). Preserved intrahepatic portal vein branches may be identified, some of which may demonstrate hepatofugal flow toward the cavernous vessels. Collateral veins may traverse the liver parenchyma to enter hepatic and capsular veins (Fig. 93-7). Doppler ultrasound imaging can be used to interrogate flow characteristics within the cavernous collaterals, revealing abnormal flow.10

Figure 93-5 Cavernous transformation of the portal vein in a 3- year-old boy with cirrhosis.
A, A transverse sonogram shows a tangle of periportal vessels without an identifiable normal portal vein (arrow). B, Axial contrast-enhanced computed tomography confirms multiple collateral vessels in the porta hepatis (arrow). 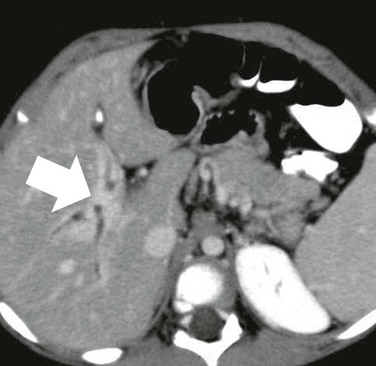 Treatment and Prognosis: A wide range of therapeutic options exist for children with portal hypertension, depending on the underlying cause and severity of liver disease. Treatments range from percutaneous transjugular intrahepatic portosystemic shunts to sclerotherapy and variceal ligation to surgical portosystemic shunts.2,11 Endovascular therapies have become more refined and are used with increasing frequency.12,13

Surgical portosystemic shunts include splenorenal shunts, mesocaval shunts, and the mesoportal (Rex) bypass. In the splenorenal shunt, the distal splenic vein is connected end-to-side to the left renal vein (Fig. 93-8), leaving the superior mesenteric vein connected to the liver. The Rex bypass was first described in 1992 by de Ville de Goyet and coworkers14 and is used in patients with extrahepatic portal vein obstruction.15 In this bypass procedure, a venous graft is interposed between the superior mesenteric vein (inferior to the pancreas) and the left portal vein, restoring portal venous flow into the liver (Fig. 93-9). The Rex shunt may be definitive therapy for children with extrahepatic portal vein obstruction.16 The collapsed intrahepatic portal system, which may be difficult to image before surgery because of exuberant intrahepatic collaterals that dominate portal flow, has been shown to distend rapidly and accommodate the large volume of flow from the shunt. The shunt can be seen by all vascular imaging modalities and should demonstrate hepatopetal flow.17 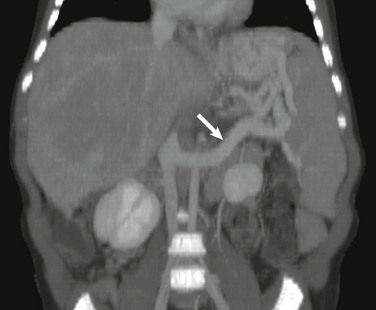 Figure 93-8 A distal splenorenal shunt in an 8-year-old boy.
Coronal reconstruction from a computed tomography angiogram shows the splenic vein connected end to side (arrow) to the left renal vein draining into the inferior vena cava. 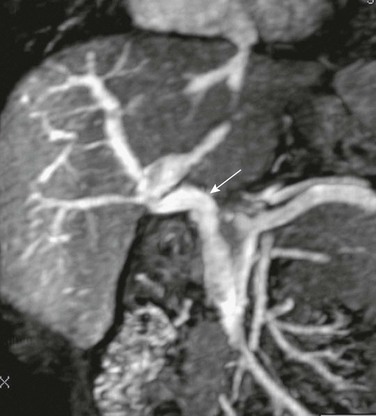 Because the Rex shunt is a bypass graft, portal flow is hepatopetal. Portal vein flow is hepatofugal in patent mesocaval and proximal splenorenal shunts; it may be hepatopetal in the more selective distal splenorenal shunts, which are designed to decompress esophageal varices and preserve some portal venous flow. These shunts provide short- and long-term palliation in children with portal hypertension to prevent gastrointestinal hemorrhages and improve hypersplenism. In children with severe underlying liver disease, these shunts are temporizing procedures before liver transplantation.18

Etiology: Hepatopulmonary syndrome is associated with hepatic vascular abnormalities (such as portal hypertension) that alter the normal portosystemic circulation and normal delivery of hepatic venous blood to the lungs, leading to right to left intrapulmonary shunting and pulmonary hypertension. The pathophysiology of hepatopulmonary syndrome has not been fully elucidated, but most hypotheses agree on the role of increased pulmonary expression of endothelin B receptor, leading to nitric oxide overproduction mediated by endothelin-1 and nitric oxide synthetase. Endothelial and arterial wall changes produce either (1) ventilation-perfusion mismatch through vasodilatation and arteriovenous shunting or (2) pulmonary hypertension.20

Imaging: Plain radiographs may demonstrate increased vascular markings and cardiomegaly (Fig. 93-10). Computed tomography (CT) may outline enlarged vessels, predominantly in the lung bases. Echocardiography with contrast material injected into the antecubital vein will demonstrate echogenic bubbles in the pulmonary veins and in the left atrium as a result of intrapulmonary arteriovenous shunting. 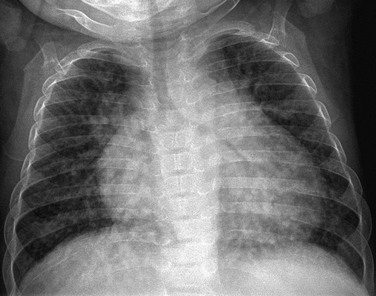 Treatment and Prognosis: The treatment of hepatopulmonary syndrome is aimed at the underlying disease, which affects prognosis. In patients in whom the syndrome is a consequence of a portovenous shunt, occlusion of the shunt can lead to regression of the intrapulmonary shunts and resolution of symptoms.13,19,21

Etiology: The causes of Budd-Chiari syndrome include a caval web, thrombosis in hypercoagulable states such as nephrotic syndrome, tumor extension into the IVC as in patients with hepatoblastoma or Wilms tumor, external compression, or liver transplantation; the syndrome also may be idiopathic.22–24

Clinical Presentation: Clinically, collateral venous drainage develops in some patients, and they may be relatively asymptomatic. Other patients present with intractable ascites, liver failure, or gastrointestinal hemorrhage. Children who experience hepatic vein or IVC obstruction after liver transplantation may experience recurrence of portal hypertension.25

Imaging: On cross-sectional imaging, hepatomegaly with ascites and poorly or nonvisualized hepatic veins are characteristic.24,26