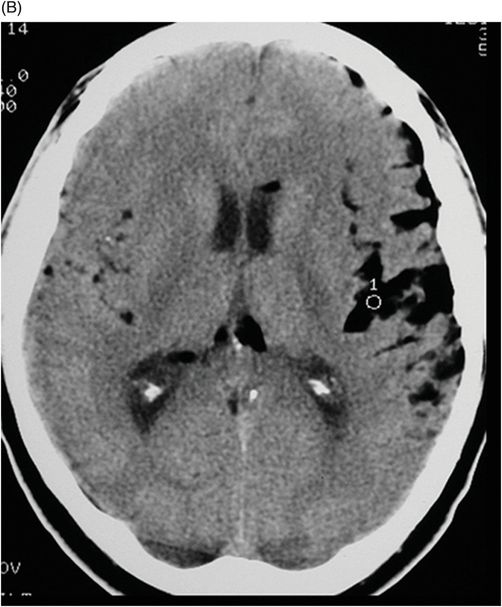 
(A–B) Non-contrast T1WI through the middle fossa and lateral ventricles. 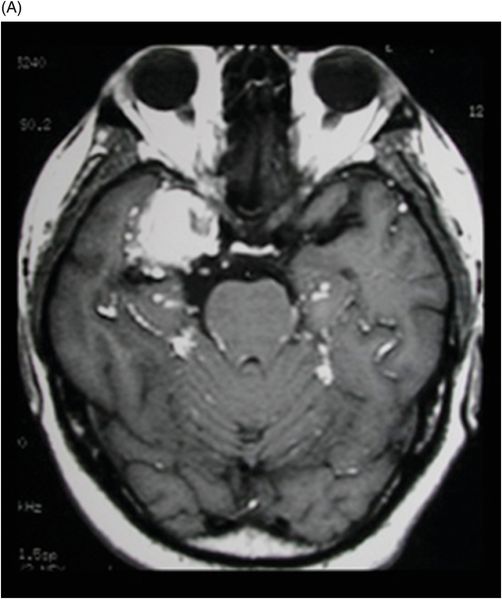 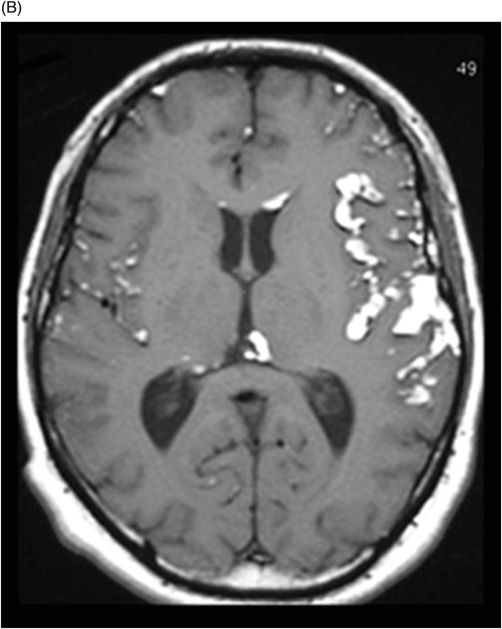 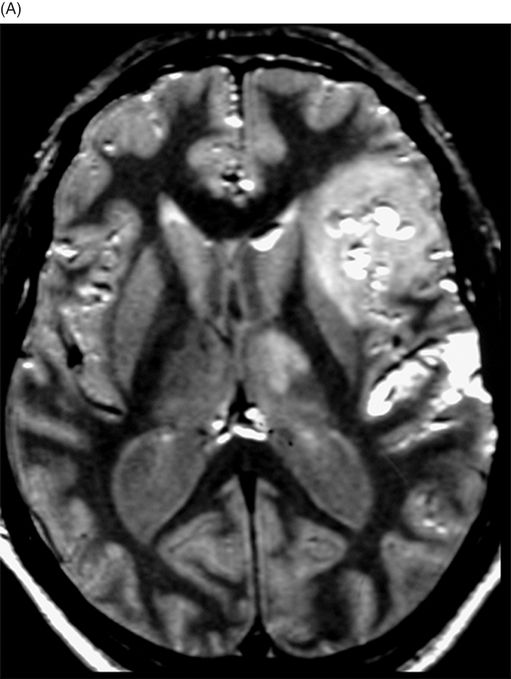 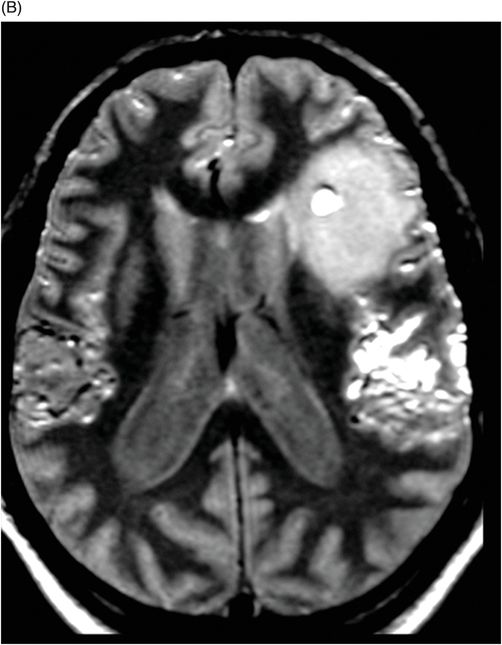 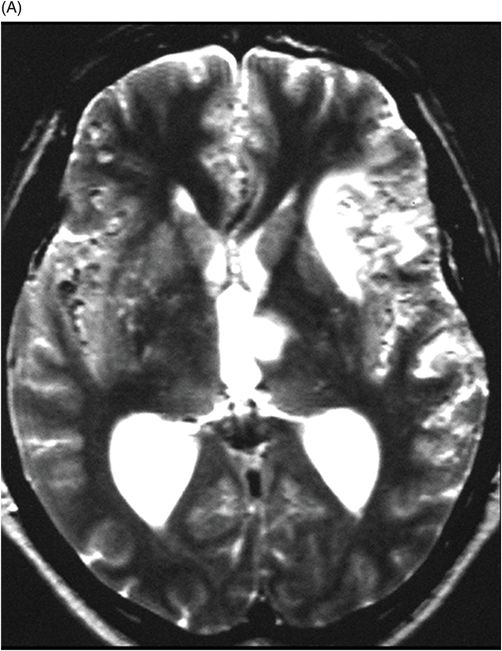 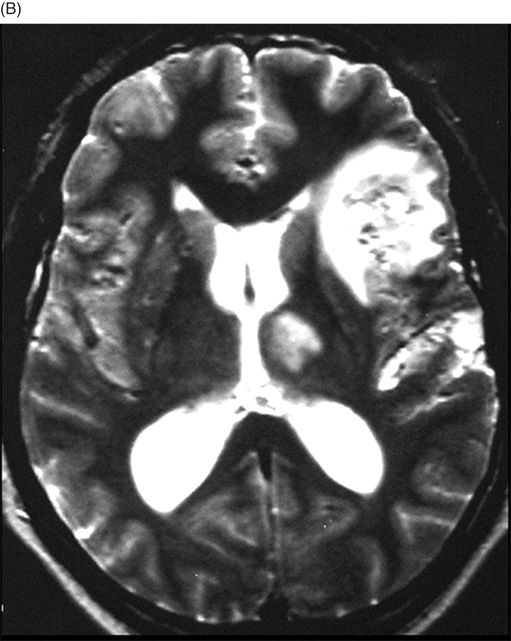 The presence of fat droplets in the CSF spaces of both the sulci and the ventricles are classical imaging findings of a ruptured dermoid cyst, as is the typical clinical presentation with acute-onset severe headache seen in this patient.

Unlike dermoid cysts, epidermoid cysts typically resemble CSF (not fat) on imaging studies, do not have dermal appendages, and are usually located off midline. Craniopharyngiomas are usually strikingly hyperintense on T2-weighted images and enhance strongly. Teratomas may also have a similar location but usually occur in the pineal region. Lipomas demonstrate homogeneous fat attenuation and/or signal intensity and show a chemical shift artifact on imaging.

Dermoid cysts are rare congenital lesions of ectodermal origin that arise from inclusion of ectodermal elements in the neural groove at its time of closure and account for less than 0.5% of all intracranial tumors. They usually present in the third decade of life and are most commonly located in the midline posterior fossa, but may also occur in the cisterns, sella turcica, and intraventricular region.

Dermoids located in the CSF cisterns lack communication between the cyst and the subarachnoid space. However, spontaneous (most common), iatrogenic, or traumatic rupture results in the dissemination of lipid material from the dermoid tumors into the CSF. Dermoid cyst rupture disperses the fatty content into the subarachnoid space cisterns and ventricles – causing chemical meningitis, hydrocephalus, vasospasm, and cerebral ischemia. Clinical symptoms of acute rupture are diverse and include headache, nausea, vomiting, vertigo, vision problems, hemiplegia, mental changes, and coma.

Chemical meningitis may lead to transient cerebral ischemia, secondary to vasospasm with complicating infarction and patient death. Post-cystic rupture symptoms are usually time delayed over a period of months to years, as the irritative effects of the spilled contents is time sensitive. Infarction may occur anywhere in the affected area, depending on the involved vessels. Imaging findings vary, depending on whether or not the cyst has ruptured. Unruptured cysts are homogeneous with low attenuation values on CT scans. On MRI, these lesions have the same imaging characteristics as fat. They are hyperintense on T1-weighted MR images and do not enhance. Dermoid cyst masses have heterogeneous signal intensity on T2-weighted MR images and vary from hypo- to hyperintense depending on the cystic components such as bones, cartilage, and calcifications, throughout or within one or more location of the lesion.

The best diagnostic imaging clue of a ruptured dermoid cyst is the demonstration of fat-like droplets in the subarachnoid cisterns and sulci. Within the ventricles, a flat fluid level may be observed that is characterized by a high-intensity fluid level anterior to the hypointensity of CSF in T1-weighted sequences. Extensive pial enhancement can be seen from chemical meningitis caused by ruptured cysts. In addition, there may be subarachnoid spread, as well as sulcal widening. A chemical shift artifact is frequently projected into the lesion on long TR sequences.

In patients with large dermoid cysts with previously reported neurologic symptoms, surgical resection is recommended, although the risk of injury to nearby neurovascular structures must be considered. In ruptured dermoid cysts, corticoids may be administered to alleviate the symptoms of chemical meningitis. Although recurrence after subtotal resection is extremely rare, close follow-up is recommended. In most cases, the disseminated fat lesions accumulated from rupture will remain stable in position, without consequences.