A 43-year-old man presented with stiffness and diminished range of motion in his shoulder and right elbow but no pain. He was status 1 year post–motor vehicle accident, at which time he experienced a whiplash injury to the cervical spine but could recall no injury to his upper limbs. 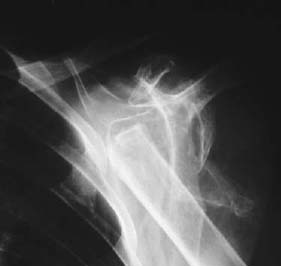 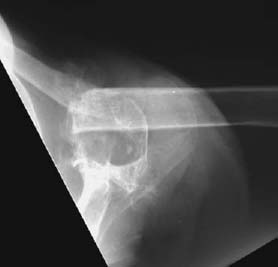 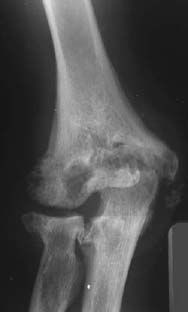 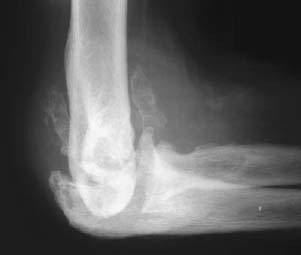 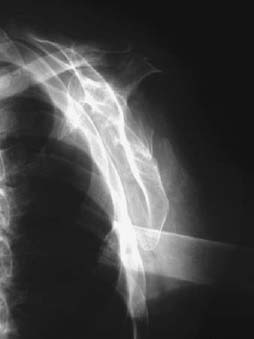 An anteroposterior (AP) radiograph of the left shoulder (Fig. 117A) shows no discernible humeral head, a very sharp margin to the end of the proximal humerus, and ossific fragments projected within the confines of the shoulder joint capsule, including a crescentic radiodensity projected lateral to the proximal humerus. The axial view (Fig. 117B) shows the proximal margin of the extant humerus, immediately anterior to which is a faint, round ossific density and through which is projected an ossific “ghost” of the humeral head, both fragments representing the remainder of the humeral head.

AP (Fig. 117C) and lateral (Fig. 117D) radiographs of the right elbow demonstrate multiple well-defined erosions of the capitellum, radial head, coronoid process, olecranon, and destructive erosion of the trochlea. The lateral radiograph in particular demonstrates a dense effusion and multiple large ossific fragments anterior and posterior to the joint.

Further investigations were performed, and a presumptive diagnosis was reached. The left arm was placed in a U-slab for 2 weeks, and a further radiograph of the shoulder was obtained (Fig. 117E), which shows further displacement of the humeral shaft and residual, but less prominent, ossific fragments within the shoulder capsule.

Neuropathic arthropathy is a progressive, degenerative arthropathy secondary to an underlying neuropathy. Any condition that leads to loss of sensation in a joint impedes both pain perception and proprioception, resulting in severely altered biomechanics (particularly in weight-bearing joints). This lack of feedback prevents patients from protecting themselves by discontinuing the damaging activity, resulting in repeated traumatic injury.

There are two major causes of a denervated joint, congenital and acquired.