A 35-year-old male amateur bodybuilder presented with sudden pain in front of his elbow and a marked loss of power on elbow flexion. He claimed to have heard a pop and felt a tearing sensation while performing fast repeated biceps curls.

On examination, there was obvious subcutaneous bruising and a visible mass just cephalad to the elbow joint that was accentuated on active flexion of the joint. The mass was tender, and elbow flexion against resistance was very painful. 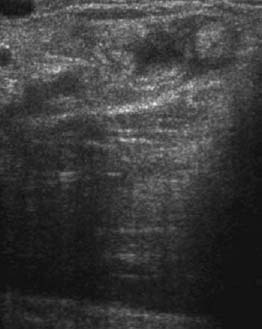 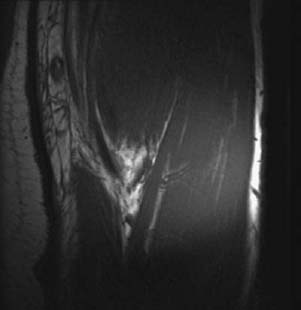 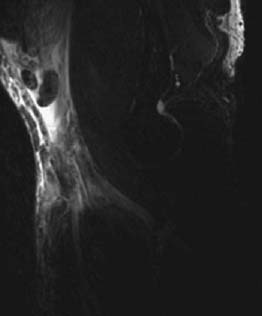 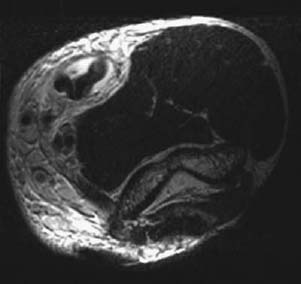 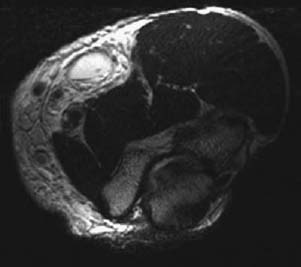 The ovoid high signal intensity collection is the empty tendon sheath at the level of the completely torn tendon. The wavy/nodular structures are the free ends of the tendon, retracted superiorly with muscle spasm and contraction.

The long head of the biceps takes its origin from the supraglenoid tuberosity and inserts on the radial tuberosity, fanning out to form the bicipital aponeurosis attaching to the fascia of the forearm. It acts as a flexor of both the arm and the forearm. The two heads of the biceps join to form a common muscle belly, ending in a flattened, horizontally oriented distal tendon, typically measuring 7 cm in length. The distal biceps ruptures the dominant arm in 80% of cases and usually occurs in men.

If no predisposing cause is identifiable, the typical age of rupture is 55. However, in bodybuilders or weight lifters, the injury occurs at a younger age, with abuse of anabolic steroids being a predisposing factor.

In common with injuries at other tendon sites, tears usually occur secondary to acute trauma or overuse injury in athletes or, in the elderly and unconditioned, degenerative tendinopathy.

The distal biceps tendon is covered by an extrasynovial paratenon, and the tendon is separated from the radial tuberosity by the radiobicipital bursa.

Bursitis may accompany tendinosis and bicipital tear, the bursa enlarging as much as 5 cm when inflamed.

The blood supply to the distal tendon is relatively poor 1 cm proximal to its insertion. This area, in addition, is prone to impingement between the radius and the ulna during pronation.

The degenerated tendon is liable to become thickened, enlarged, and irregular with inflammation of the adjacent bursa. These factors will make further contributions to impingement likely, leading to further degeneration of the tendon. Bicipital tendinosis is relatively common (Figs. 20F, 20G