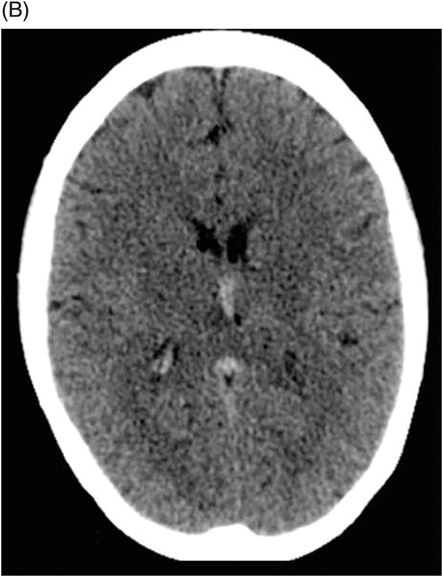 
(A–B) Postcontrast CT through the level of the third ventricle. 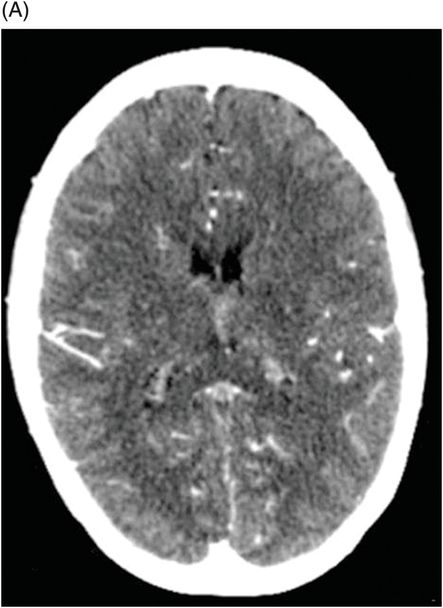 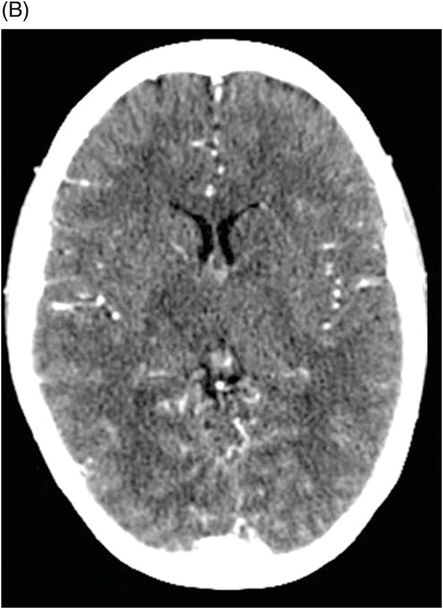 
(A–C) Axial T2WI and FLAIR sequences through the level of the lateral ventricles. 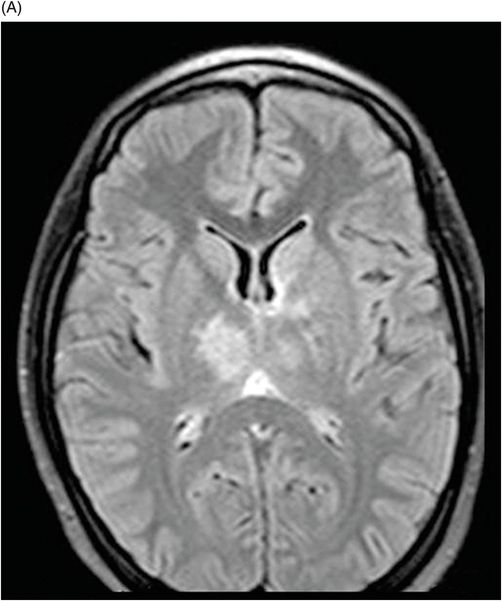 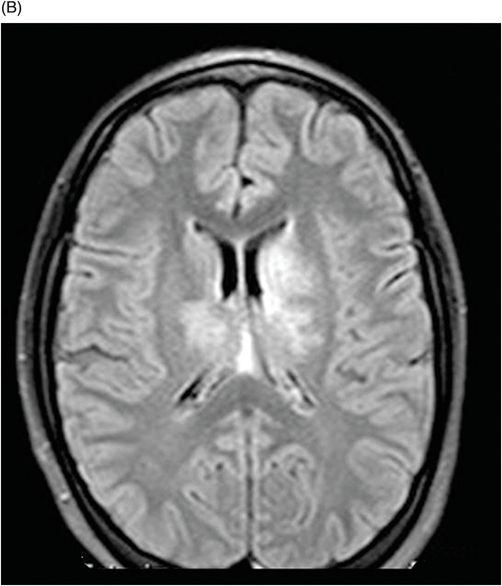 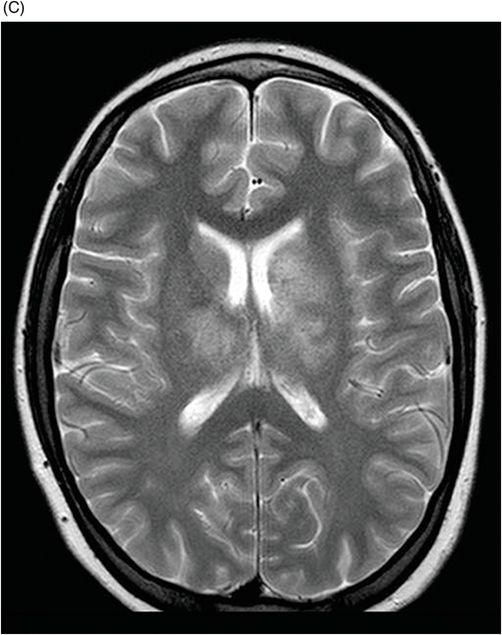 
(A–C) Axial T2* through the level of the third ventricle and the lateral ventricles. 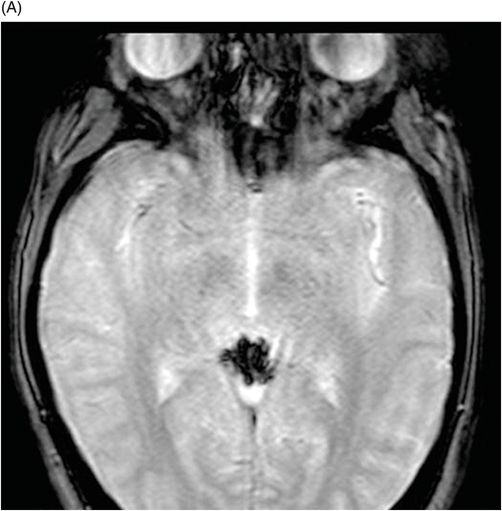 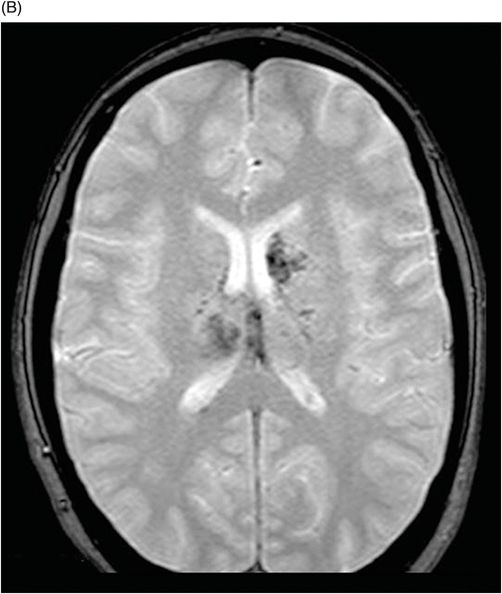 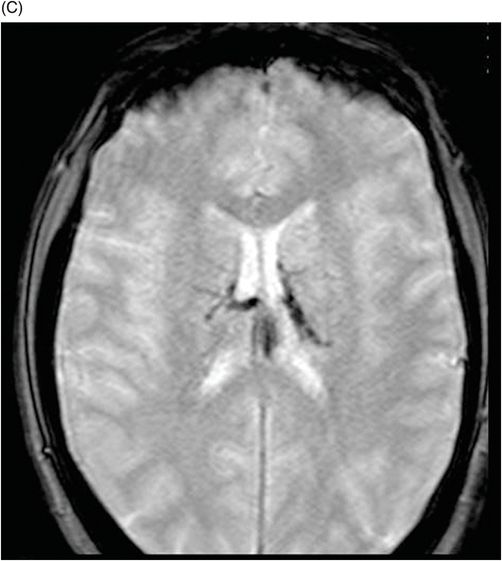 A history of oral contraceptive use is highly suggestive of cerebral venous thrombosis. Hyperdensity involving the internal cerebral veins, characteristic T2 hyperintensity involving bilateral thalami, and presence of hemorrhage on imaging studies in a young woman with acute-onset, severe headache is consistent with a diagnosis of internal cerebral vein thrombosis. Infarct at this age is extremely rare in the absence of predisposing factors such as abnormal coagulation or atrial fibrillation. Although imaging features may suggest artery of Percheron infarct, it would be atypical in this patient’s clinical setting. Central variant of PRES can have a similar appearance, although it is atypical in this age group without predisposing factors such as autoimmune disease. No prominent vascular structure is noted in the region of the tentorial apex to suggest a tentorial apex arterial venous fistula. Absence of internal cerebral vein enhancement and low signal on GRE sequence are not seen in bithalamic glioma.

The deep venous system drains blood from the thalami, the basal ganglia, the white matter, the medial part of the temporal and occipital cortex, and the cranial and posterior part of the cerebral peduncles. In addition, some cerebellar veins, such as the superior vermian vein and precentral cerebellar vein, drain into the vein of Galen or the internal cerebral veins.

The imaging hallmark of this condition is thalamic edema, which may extend into the caudate regions and deep white matter. In most cases, the thalamus is affected bilaterally: thrombosis of deep cerebral vein rarely presents unilaterally. Thalamic edema may be seen in as many as 76% of CT scans and 86% of MR studies from patients with deep cerebral venous thrombosis. Despite its extensive nature, edema may be primarily vasogenic (with elevated ADC values) and may resolve without sequelae. Hemorrhage is noted in 19% of patients and typically is located in the thalami. Although historical mortality rates among patients with this condition are estimated to be between 22% and 37%, as many as 54% of patients may have no neurologic sequelae.

The first imaging study performed in patients with deep cerebral venous thrombosis is usually CT. It should be noted that findings could be normal in about 38% of acute phase patients. The most common finding is hypodensity of the thalami and internal capsule. Hemorrhagic infarction is characterized by a spontaneous hyperdense signal. The thrombus can often be demonstrated as a hyperdense structure at the site of the straight sinus (cord sign), vein of Galen, and the internal cerebral veins. Compression of the foramen of Monro or third ventricle from the extensive edema of the thalami and the basal ganglia may cause hydrocephaly.

In MRI studies, edema of the thalami can be demonstrated as hyperintensity on the T2- and FLAIR-weighted images. Diffusion-weighted images may demonstrate the presence of a cytotoxic edema before T2WI images do. A hypodense signal on ADC mapping can confirm this and distinguish between cytotoxic edema and venous congestion. Hemorrhagic infarction due to presence of blood degradation products may be seen as susceptibility artifacts on T2* images of hemorrhagic infarction.

The lack of flow void in the deep venous system is very suggestive for venous thrombosis. In early-stage thrombosis development, low T2 signal intensity may be misinterpreted as a flow void. However, the absence of occluded veins is demonstrated on MRA images. Absence of a transverse sinus is often physiologic, as drainage of the superior sagittal sinus into one transverse sinus is a normal variant in 25% of the patients.

Use of anticoagulant therapy is an effective treatment for thrombosis. In clinically stable patients, with no general contraindication, heparin therapy is used. The presence of hemorrhagic component is not considered a contraindication. In rapidly deteriorating patients, a more aggressive therapy is proposed and local urokinase therapy can be used.

Accurate and prompt diagnosis of cerebral venous thrombosis is crucial: timely and appropriate therapy can reverse the disease process and significantly reduce the risk of acute complications and long-term sequelae. Since the possible causal factors and clinical manifestations of thrombosis are many and varied, imaging plays a primary role in the diagnosis.