A 53-year-old woman presented with unremitting pain in her foot, exacerbated by walking, with occasional shooting pain into her toes. 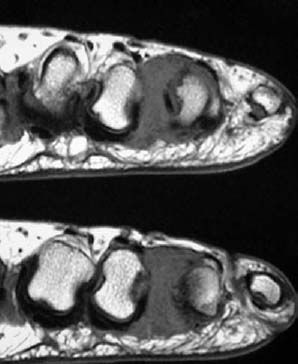 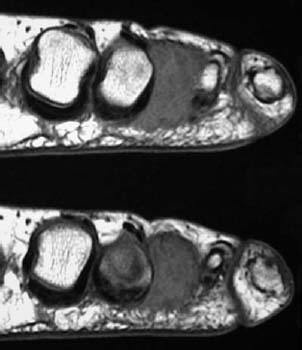 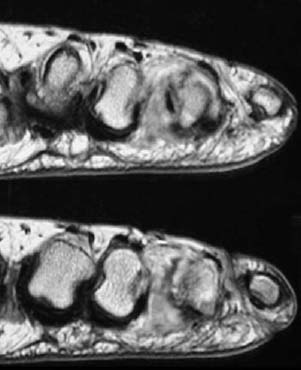 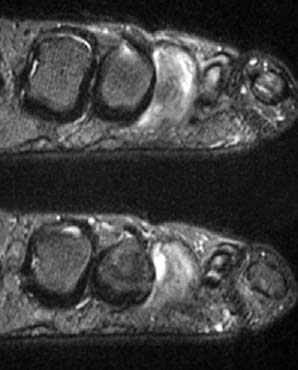 Foot pain is an increasingly common clinical complaint, especially in an aging population engaged in physical exercise programs. The referral of a patient with forefoot pain where Morton’s neuroma is the working clinical diagnosis is an increasing source of referrals, particularly from podiatrists.

This lesion is not a true neoplasm, but a fibrotic overgrowth, the cause of which is unknown, although repetitive biomechanical trauma (e.g., secondary to wearing high-heeled shoes) has been implicated.

It is thought that dorsiflexion of the toes produces friction of the affected nerve against the edge of the intermetatarsal ligament, resulting in fibrosis and consequent enlargement of the nerve sheath, predisposing to further friction.

The lesion (bilateral in ~10% and multiple in as many as 28%) is most commonly found between the second and third metatarsal heads. Compression of the neuroma on walking irritates the associated interdigital nerve, giving rise to the characteristic neuralgia.

Eighty percent of patients are middle-aged women. The presenting complaint is either pain in the foot localized to the affected web space or adjacent metatarsal phalangeal (MTP) joint and/or paresthesia on walking. The pain may progress over time. Critically, the pain secondary to a neuroma is constant and not relieved by rest. Clinical examination usually reproduces the typical pain with exquisite tenderness on compression of the affected web space and circumferential compression of the metatarsal heads.

A mass of pale fibrous tissue is demonstrable wrapped around the normal nerve.

The mass is seen to be composed of benign perineural fibrosis surrounding a plantar interdigital nerve.

Radiographs are rarely contributory, although widening of the web space may be demonstrable when the lesion is large.