A 51-year-old woman presented complaining of a slightly painful lump at the base of her index finger. No bone or joint abnormality was seen on plain film. 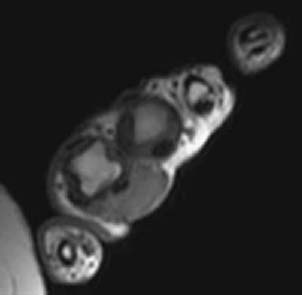 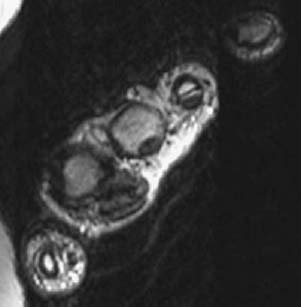 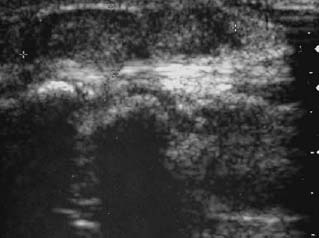 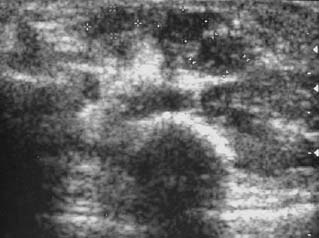 Transaxial T1-weighted (Fig. 60A) and T2-weighted (Fig. 60B) images of the hand at the level of the metacarpophalangeal joints show an intermediate signal intensity mass on the volar aspect of the flexor tendons palmar to the head of the second metacarpal. The mass is seen to extend dorsally on either side of the tendons. The lesion extends from just deep to the dermis to the metacarpal periosteum, but without osseous invasion. A transaxial gradient image (Fig. 60C) demonstrates linear, very low signal intensity within the lesion with minimal associated “blooming.”

Images taken at the time of ultrasound-guided biopsy, sagittal (Fig. 60D) and transverse (Fig. 60E), show a lobulated heterogeneous hypoechoic mass anterior to the tendon, which is seen deep to the mass as a typical hyperechoic fibrillar structure. The tendon sheath is draped over the top of the mass from which it is inseparable.

GCTTS is a proliferative disorder of tendon sheaths that is the second most common cause of a mass of the hand and wrist. Previously known as nodular synovitis, GCTTS is now recognized as pathologically indistinguishable from pigmented villonodular synovitis (PVNS), occurring as a localized form of the latter, of which it accounts for 75 to 85% of all PVNS lesions (diffuse lesions accounting for 15 to 25%).

Unknown. Inflammatory, neoplastic, and traumatic etiologies have all been proposed.

The lesion gives rise to symptoms primarily secondary to local mass effects, for example, impingement on digital nerves, pressure erosion on adjacent bone, and hindering flexion of the affected digit.

GCTTS has a maximum incidence between ages 40 and 60, with a wide range from 14 to 77 years reported. There is a slight female preponderance (6:4). The lesions are most common in the fingers (80%), followed by the knee, hand and wrist, feet, and hip. Lesions are found twice as often on the palmar aspect on the hand than on the dorsum, usually opposite a distal interphalangeal (DIP) or metacarpal phalangeal (MCP) joint.

These lesions typically present as a small lobulated, firm, and laterally mobile swelling measuring between 5 mm and 3 cm. They are typically covered by normal skin but are frequently fixed on the deep aspect. They are usually painless but may give rise to pain as a result of pressure on local nerves. They usually have been present for several months before presentation and typically demonstrate steady, progressive growth that eventually interferes with joint excursion.

Bony erosion is uncommon, occurring in only 10 to 15% (compared with the diffuse form of PVNS, in which erosion occurs, on average, in 50% of affected knees).