A 14-year-old boy presented with a several-month history of pain in the left thigh. He reported that the pain was worse at night and that it responded temporarily to ibuprofen. 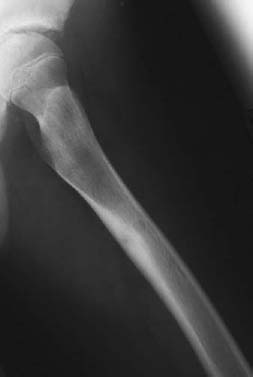 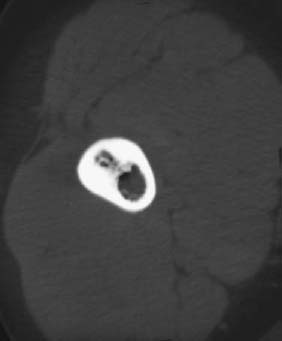 The radiograph demonstrates a long area of cortical thickening and mature-appearing periosteal reaction in the left proximal femoral cortex (Fig. 65A). In this area of dense new bone formation is a small central cortical lucency. A CT scan (Fig. 65B) shows the small radiolucent nidus surrounded by marked mature-appearing new bone formation. Note the central calcification in the radiolucent nidus.

Osteoid osteoma represents the third most common bone tumor, after osteochondroma and nonossifying fibroma, and accounts for ~10 to 11% of all benign bone tumors. The majority of lesions are cortically based. Cortical lesions most commonly (70 to 80%) occur in the diaphysis of long tubular bones, particularly the femur (intertrochanteric region), tibia, and humerus. The posterior elements of the spine account for 10% of lesions. Lesions may also occur in an intramedullary, subperiosteal (most common along the femoral neck or talus), or intra-articular (intertrochanteric regions particularly) location.

The classical presentation is a several-month history of dull, aching pain, at its most severe at night, relieved by aspirin or other nonsteroidal anti-inflammatory medications. Children may also present with a limp. Bowing or varus/valgus deformities, as well as leg length discrepancies (with the affected limb being longer), are not uncommon. Intra-articular lesions (Fig. 65C) may cause synovitis, joint effusion, and joint pain, whereas spinal lesions classically produce painful scoliosis (concave to the side of the lesion). This scoliosis characteristically worsens in the supine position relative to the erect position, unlike patients with idiopathic scoliosis, in whom the scoliosis is worse when the patient is standing. Although there is a broad age range of reported cases, most lesions occur in the first three decades of life, and ~70% of patients are younger than age 20 at the time of diagnosis. 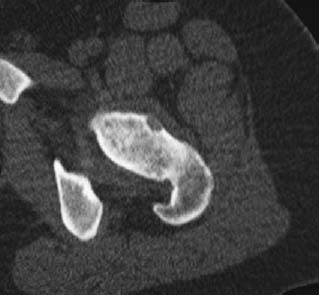