An 18-year-old man presented with a history of trauma to the knee 1 year previously. He had noticed progressive development of a painful soft-tissue mass posteriorly in the knee since that time. 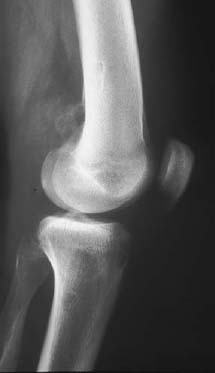 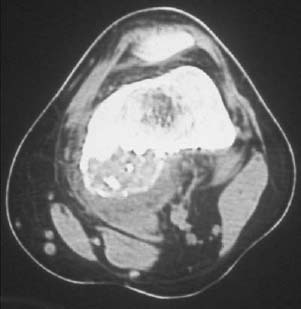 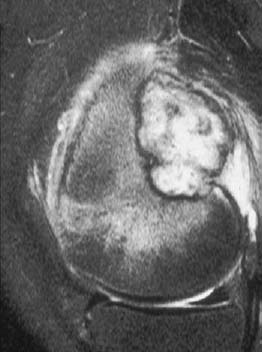 The lateral radiograph of the knee (Fig. 66A) shows a large expansile mass arising from the posterior surface of the distal femur. There is punctate mineralization in the mass as well as an intact surrounding rim of bone. The CT scan (Fig. 66B) confirms that the lesion is arising from the surface of the femur and demonstrates the internal mineralization. The nonmineralized portion of the mass has an attenuation similar to skeletal muscle. The lesion is predominantly high signal on the sagittal T2-weighted image (Fig. 66C). There is marked surrounding inflammatory reaction and edema, in both the soft tissues and bone. The low signal intensity areas correspond to regions of mineralization.

Osteoblastomas are rare primary bone neoplasms, accounting for < 1% of all bone tumors and ~3.5% of all benign bone tumors. They are pathologically similar to osteoid osteomas but are larger. Lesions commonly occur in the long tubular bones (34%), spine and sacrum (30%), facial bones (especially the mandible) and skull (15%), small bones of the hands and feet (10%), and pelvis (5%). As with osteoid osteoma, pelvic osteoblastomas often arise in a periacetabular region. Spinal lesions most commonly involve the posterior elements alone (55%), with the remainder usually involving the posterior elements with extension into the vertebral body. Isolated vertebral body involvement is rare. Long bone lesions are diaphyseal (75%) or metaphyseal. The femur is the most commonly involved long bone. Lesions may be intramedullary, cortical, or subperiosteal in location.