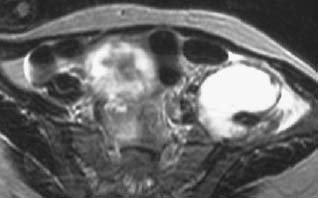 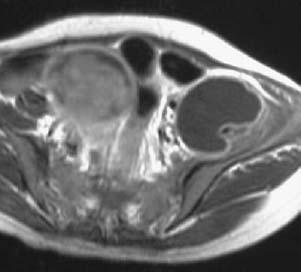 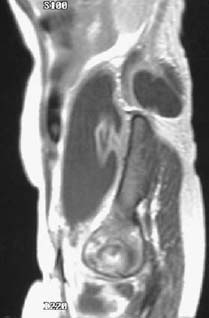 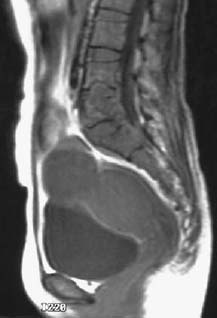 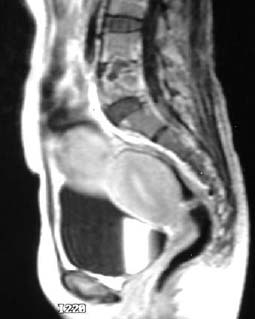 A transaxial T2-weighted image (Fig. 73A) through the pelvis shows a high signal collection, which on T1-weighted image postgadolinium (Fig. 73B) reveals a hypointense center and an enhancing rim.

A parasagittal T1-weighted image postgadolinium (Fig. 73C) shows the same collection in longitudinal section. Extension of the collection posterior to the spine above the iliac crest can be seen.

A sagittal T1-weighted image (Fig. 73D) reveals an ill-defined lobular lesion within the vertebral body of L5, which crosses the disk space superiorly into L4 and inferiorly into the back of the S1 vertebral body. Although the center of the lesion is hypointense, it demonstrates some internal heterogeneity. Most of the L4/L5 disk space is obliterated.

Tuberculosis is endemic in the population of many developing nations, and Pott’s disease is common in children living in these areas. There is no gender predilection. In the developed world, risk factors for Pott’s disease include human immunodeficiency virus (HIV), immunosuppression, alcoholism, homelessness, drug abuse, and residence in long-term care facilities and prisons.