Airways disease may have a variety of causes, including inhalation of organic or inorganic materials, systemic diseases, infections, tumors, and congenital defects. Airways diseases are broadly categorized by the size of airways involved as large airways disease or small airways disease.

Irreversible dilatation of the bronchi is termed bronchiectasis. Bronchiectasis is usually defined by an increased bronchoarterial ratio (BA, described below) or specific contour abnormalities that indicate the presence of bronchial dilatation. Bronchiectasis has a variety of causes (Table 6.1), including infections, chronic inflammatory disease, bronchial obstruction, and morphologic bronchial abnormalities.

A transient increase in bronchial diameter may be seen in patients who have atelectasis or inflammatory lung disease; this is sometimes referred to using the oxymoronic term “reversible bronchiectasis.”

A BA ratio greater than 1.0 is usually considered abnormal (Fig. 6.1), but this may sometimes be seen as a normal finding in elderly patients and patients living at high altitudes (e.g., Denver, the mile-high city). 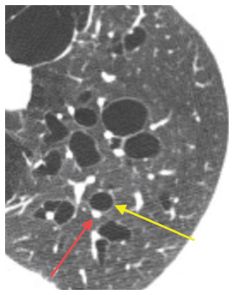 A BA ratio greater than 1.5 is usually specific for airway dilatation. In patients with a BA ratio between 1.0 and 1.5, the presence of airway wall thickening or impaction, or mosaic perfusion and air trapping, makes it likely that airways disease is present. The term signet ring sign refers to the presence of airway dilatation with an increased BA ratio. The ring represents a dilated airway, whereas the signet or stone represents the smaller adjacent artery.

One caveat: the BA ratio may be elevated in patients with normal bronchi and abnormally small arteries. This may be seen in processes such as alpha-1-antitrypsin deficiency or chronic pulmonary embolism.

Contour Abnormalities in the Diagnosis of Bronchiectasis

Bronchiectasis is classified into three categories depending upon the severity and morphology of airway dilatation. These specific contour abnormalities may be used to diagnose the presence of bronchiectasis.

2.  Varicose bronchiectasis (Fig. 6.3) is due to more severe, long-standing, or recurrent airway injury. The contour of the bronchial walls appears irregular with focal areas of dilatation intermixed with regions of narrowing. This form of bronchiectasis may be seen with most causes of bronchiectasis, including chronic infection, inflammation, and lung fibrosis. It may be referred to as having a “string of pearls” appearance.

Cylindrical bronchiectasis. Mild bronchial dilatation is present without evidence of strictures or saccular dilatations. When the bronchi lie within the axial plane (A) they appear tubular, with parallel walls (arrows). When they are oriented perpendicular to the axial plane (B) they appear circular (arrows), and the signet ring sign is characteristically present. 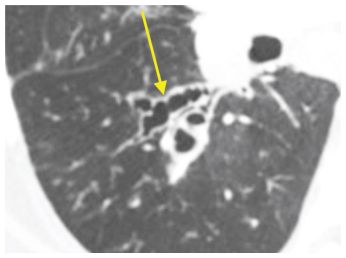 Varicose bronchiectasis. Bronchial dilatation with an irregular contour and wall thickening (arrow) are present. This appearance, while nonspecific, reflects a more severe and long-standing process.

3.  Cystic bronchiectasis (Fig. 6.4) is the most severe form of airway dilatation and is seen only with long-standing, severe causes of airways inflammation. Morphologically, it is characterized by relatively large saccular dilatations of the airways that often contain air/fluid levels. It may be focal or diffuse. The differential diagnosis of cystic bronchiectasis is more focused, given that only a limited number of diseases cause severe, chronic inflammation in the large airways. It is sometimes described as having a “cluster of grapes” appearance. 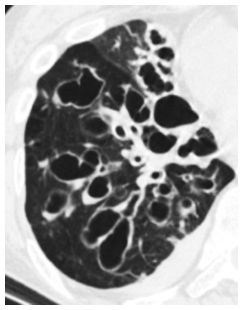 Cystic bronchiectasis. The bronchi are markedly enlarged with multiple saccular dilatations and air/ fluid levels. This appearance reflects severe, chronic airways inflammation and is seen with a limited number of diseases.

Often the diagnosis of bronchial wall thickening is subjective and based on experience or on a comparison of bronchi in one lung region to those in another. Airways disease is often patchy in distribution, which allows this comparison to be made. 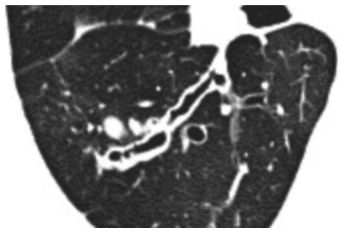 Bronchial wall thickening in varicose bronchiectasis. The bronchial wall in this patient with atypical mycobacterial infection is >5 mm in maximum thickness. In some regions, the ratio of the thickened wall to the air-filled lumen is greater than 1:1.

Airway impaction is characterized by filling of the airway lumen by secretions, infectious debris, or other substances. Depending upon the orientation of the airways with respect to the image, airway impaction will appear as circular or tubular structures (Fig. 6.6A, B) that connect to more central bronchi.

In most cases, the findings of large airways disease associated with acute infection are mild and reversible. The presence of more extensive or severe abnormalities, such as varicose bronchiectasis, should suggest a remote (i.e., childhood) infection or a different etiology. 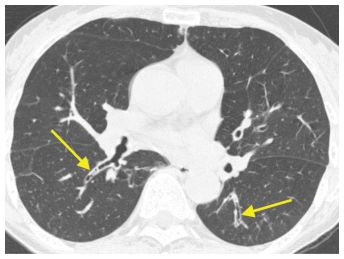 Viral infection with bronchial dilatation and wall thickening (arrows). Among acute infections, viral organisms are most likely to produce isolated abnormalities of the large airways such as in this patient with dilated and thickened airways (arrows).

Allergic bronchopulmonary aspergillosis (ABPA) is a disorder seen predominantly in asthmatics or patients with cystic fibrosis (CF). It is a hypersensitivity reaction to Aspergillus that colonizes the lumen of the airways, without invasion into the lung parenchyma. The diagnosis of ABPA is predominantly clinical, but typical HRCT findings may also be diagnostic.

The most characteristic HRCT finding in patients with ABPA is unilateral or asymmetric, central (parahilar), cylindrical or varicose bronchiectasis, associated with mucoid impaction (Fig. 6.9). The mid- or upper lungs are typically involved. High-attenuation (100 HU) mucous plugs are particularly suggestive of this diagnosis. The finding, seen in about 25% of patients with ABPA, reflects concentration of calcium salts and metallic ions by the fungus.

CF is a congenital disorder that results in impaired clearance of bronchial secretions. This predisposes patients to chronic mucostasis and airway infection. While classically presenting in a young patient population (less than 20 years of age), a greater understanding of the genetic heterogeneity and variable penetrance of this disease has led to the diagnosis of patients presenting later in life. Also, improvement in treatment has allowed many young patients with CF to survive into adulthood. 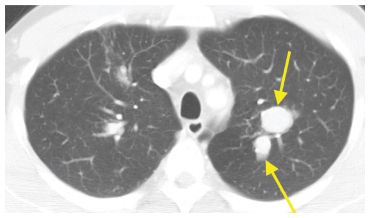 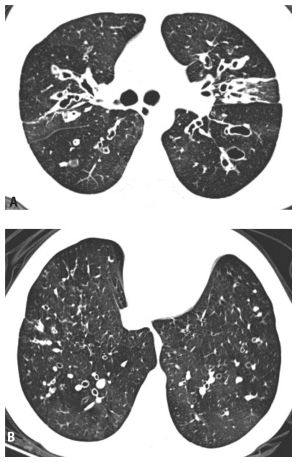 Cystic fibrosis. Extensive varicose and cystic bronchiectasis, bronchial wall thickening, and mucous impaction are noted in the upper lobes (A). The process is symmetric and relatively spares the lower lobes (B). This pattern is most typical of cystic fibrosis.

Typical HRCT findings include symmetric, upper lobe predominant, central bronchiectasis, bronchial wall thickening, and luminal impaction (Fig. 6.10A, B). The right upper lobe is often involved first, and most severely. The bronchiectasis varies in severity, but varicose or cystic bronchiectasis is most characteristic in advanced cases. Findings of small airways disease (bronchiolectasis, centrilobular nodules, and TIB) are often present in association with the large airways findings. Mosaic perfusion and air trapping are usually present. Hilar enlargement may be due to reactive lymphadenopathy or pulmonary arterial enlargement.

Congenital or acquired immunodeficiency predisposes patients to chronic airways infection. Congenital immunodeficiencies that commonly lead to large airways disease include agammaglobulinemia, hypogammaglobulinemia, and common variable immunodeficiency. The findings are similar to other causes of chronic large airways disease and include bronchiectasis (often cystic), bronchial wall thickening, and mucoid impaction. The distribution tends to be symmetric and lower lobe predominant.

The HRCT findings are very similar to those seen with congenital immunodeficiency. Abnormalities usually are symmetric and affect the lower lobes. Cystic or varicose bronchiectasis is typical and associated with airway wall thickening and mucous impaction. Findings of small airways disease may also be present, but do not predominate. Kartagener syndrome is associated with situs inversus (Fig. 6.11A, B). 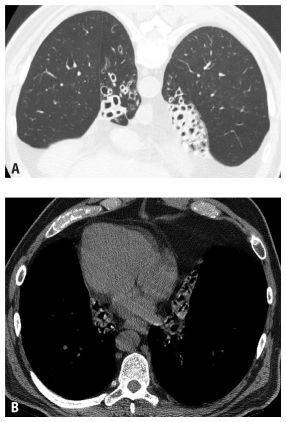 Williams-Campbell syndrome is a rare congenital disorder characterized by the absence of cartilage in the fourth through sixth order bronchi. It typically presents in children, but a rare initial presentation in adults has been described. Lack of supporting cartilage causes weakness and dilatation of affected bronchi. Over time, this eventually leads to chronic mucostasis and infection.

Cystic bronchiectasis with a mid- to lower lung predominance is characteristic. Focal mid-lung bronchiectasis may be present or there may be more extensive dilatation beginning in the central lung and extending peripherally. As is typical of other disorders of cartilage, there may be severe cystic bronchiectasis with relatively little airway inflammation. The airways typically show significant increase in size during inspiration and collapse on expiration. This is in contrast to immunodeficiency syndromes and primarily ciliary disorders.

Tracheobronchomegaly or Mounier-Kuhn syndrome is another rare condition in which there is atrophy of portions of the tracheal and bronchial walls.

Typical HRCT findings include thinning of the walls of the trachea and bronchi. The airways are dilated and show dynamic collapse during expiration. Scalloping of the walls of the affected airways may be seen because of restriction of the lumen by cartilage rings (Fig. 6.12A, B). As with Williams-Campbell syndrome, there may be a relative lack of inflammatory abnormalities, even in cases of severe dilatation. 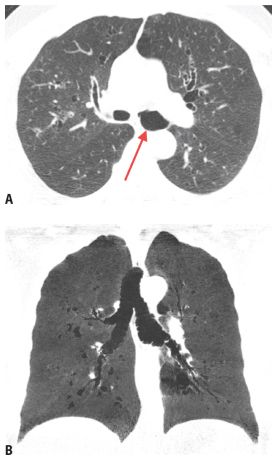 Tracheobronchomegaly. Marked dilatation of the left main bronchus (red arrow) is noted in association with bronchiectasis predominantly within the central lung regions (A). There is a relative paucity of airways inflammation and wall thickening. Coronal reformatted minimum intensity projection image (B) shows scalloping of the tracheal wall and thin-walled bronchiectasis in the central lung regions.