The ACL extends from the posterior part of the medial aspect of the femoral condyle to the anteromedial tibial plateau. The normal sagittal angle between ACL and the tibial plateau depends on patient’s age and gender. The mean sagittal angle between ACL and the tibial plateau in adults is between 54° and 55.5° with a cutoff angle smaller than 45° suggestive of an ACL tear in adults [1, 2].
The ligament is intra-articular but extrasynovial being enveloped by a fold of synovium.
It consists of two bundles named according to their tibial insertion: a small anteromedial bundle and a larger posterolateral bundle. The posterolateral bundle is shorter (18.4–22.9 mm) than the anteromedial bundle (34.1–39.7 mm) [3]. The anteromedial bundle limits anterior-posterior translation, while the posterolateral bundle limits anterior tibial translation and knee rotation [4].
On MR images, the ACL is seen as a band of low signal intensity in all sequences (Fig. 1.1). The different bundles can however be well appreciated on MR images. The anteromedial bundle can be seen on MRI in the sagittal and coronal planes as oblique fibers inserting at the anterior border of the ACL on the tibia and the proximal aspect of the femoral insertion on the lateral femoral condyle (Fig. 1.1). The posterolateral bundle is represented by oblique fibers inserting posteriorly on the tibia and on the distal aspect of the femoral insertion just below the anteromedial bundle (Fig. 1.1). As a consequence, in general the low signal intensity of the ACL is separated by several lines of increased signal intensity on T1- or intermediate-weighted images, most prominently near the tibial attachment. These lines are consistent with stripes of fat and synovium of high signal intensity at the tibial attachment (Fig. 1.1). 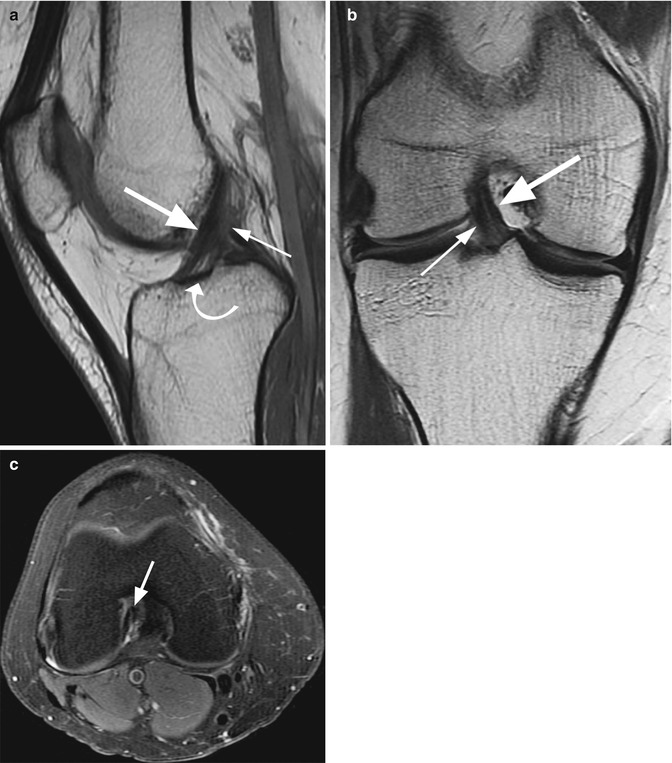 Unilateral or bilateral agenesia of ACL is a very rare condition and may be accompanied by other knee abnormalities such as hypoplasia of the medial tibial plateau and/or the lateral femoral condyle, patellar hypoplasia, an abnormal shape of the intercondylar notch, hypoplasia of the lateral part of the tibial spine, or fibular hypoplasia [5]. Only half of the patients present clinical signs of instability, and compared with posttrauma cases, ACL agenesia has a better prognosis regarding the progression to osteoarthritis [5].
On MR imaging, the anterior cruciate ligament is absent and cannot be identified on any of the examination planes (Fig. 1.2).

Unilateral congenital absence of anterior cruciate ligament (ACL) in a 13 year old female tennis player without trauma or clinical instability. Sagittal proton-density (PD) FSE image (a) and coronal T1-weighted FSE MR image (b) show the absence of ACL with fatty tissue where the ligament should have been present (arrow) 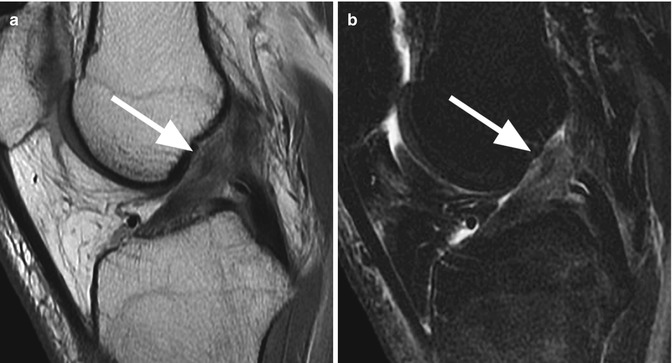 Complete acute tear of the anterior cruciate ligament (ACL) at the femoral insertion in a 36 year old female. Axial proton-density (PD) FSE fat-suppressed image shows high-signal-intensity changes due to hematoma at the femoral insertion of ACL (arrow)
An ACL acute tear may present with a mechanical block caused by an ACL stump between femoral condyle and tibial plateau (Fig. 1.6). The stump may also appear as a nodular mass with heterogeneous signal on T2-weighted images reflecting fibrosis or an inflammatory response (Fig. 1.7) [6]. 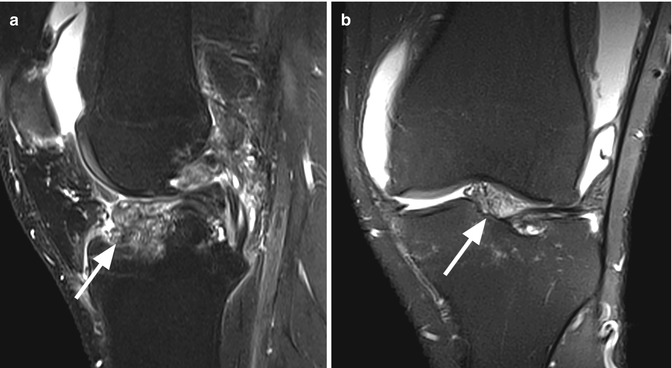 In addition to direct visualization of the torn ACL, MR images can be evaluated for indirect signs known to be typically associated with ACL tears. The secondary signs may appear in more than 90 % of the acute ACL tears and the mostly used secondary signs for diagnosis of ACL tears are as follows: the femoral and tibial contusion in the lateral compartment (indicated by an acute traumatic bone marrow edema) (Fig. 1.8), altered angle between lateral tibial plateau and ACL (less than 45°) (Fig. 1.9), altered posterior cruciate ligament angle (less than 107°) (Fig. 1.10), abnormal (buckled) course of the PCL (Fig. 1.11), and the anterior displacement of tibia (Fig. 1.12) [7]. These secondary signs have high specificity and their presence corroborates with the diagnosis of ACL tear. However, sensitivity is generally low and the absence of these signs does not exclude the presence of an ACL tear [1]. 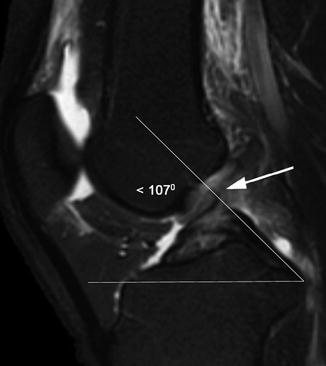 Abnormal femorotibial relationship in a 35 year old male with complete tear of anterior cruciate ligament. The absence of the main restraint of anterior tibial translation represented by the anterior cruciate ligament (ACL) is visualized on sagittal MR images as an abnormal femorotibial relationship. Sagittal proton-density (PD) FSE image shows an increased distance between the tibial posterior margin (line 1) and femoral posterior margin (line 2). A distance more than 5 mm is suggestive for ACL tear

The partial tears represent 10–28 % of all ACL tears. The criteria of diagnosis include the absence of primary signs of complete ACL tear in conjunction with discrete focuses of high signal intensity within the midsubstance of the ACL or high-signal-intensity changes at the insertions with a normal ACL course (Fig. 1.13). The nonvisualization of the ACL on one MRI sequence with visualization of the fibers on other sequences or the bowing or undulating course of otherwise intact ACL also indicates a partial ACL tear (Fig. 1.14) [4].

Typical partial tear of anterior cruciate ligament (ACL) involving 50 % of the ligament thickness in a 29 year old female with knee injury. Sagittal T2-weighted FSE fat-suppressed image shows a complete tear of the distal anteromedial bundle demonstrated by discontinuity of the bundle with a focal high-signal-intensity intrasubstance lesion (arrow) and an undulating course of the ligament
Partial tearing may affect one or both bundles of the ACL which means that one bundle can be torn completely with the other bundle being partially torn at the same time (Fig. 1.15). In partial ACL tears, the involved fibers and bundles can often be well seen, and the percentage of torn fibers should be reported (e.g., “75 % of the substance of the ACL is torn”) (Figs. 1.14 and 1.15).

Partial tear of the anterior cruciate ligament (ACL) involving more than 75 % of the distal ligament thickness in a 19 year old male. Sagittal T2-weighted FSE fat-suppressed image shows diffuse high-intensity changes (arrow) which involve the entire posterolateral bundle and partially the anteromedial bundle at the tibial insertion of the ligament
Diffuse high-signal-intensity changes of one of the bundles at the tibial insertion with the nonvisualization of the linear high-intensity distal stripes indicate a partial distal tear of one of the bundles.
Widening of the entire ligament is associated with interstitial or intrasubstance partial tear.

Avulsion Fracture of the Intercondylar Eminence

Excessive tension on ACL may result in an interarticular avulsion fracture of the intercondylar eminence of the tibia. This type of fracture occurs more frequently in children than adults, and the mechanism varies between children and adults. In adults, the fracture most commonly occurs secondary to an extreme hyperextension. The role of MRI is to confirm the fracture and to evaluate the ACL since partial or complete tear of ACL is often associated with this type of fracture (Figs. 1.16 and 1.17). There are three types of tibial avulsion fractures that describe a minimally or partial displaced fragment (type I and type II) (Fig. 1.16) or a complete separation of the fragment from the adjacent bone (type III) (Fig. 1.17) [8]. For type III fractures, surgical therapy is needed.

Avulsion fracture type II of the intercondylar eminence of the tibia at the insertion of anterior cruciate ligament (ACL) in a 27 year old male with severe knee injury. Sagittal T2-weighted FSE fat-suppressed image (a) and coronal proton-density (PD) FSE MR image (b) show a bone fragment (arrow) from the intercondylar eminence with anterior elevation of the fragment without complete separation
Only gold members can continue reading. Log In or Register to continue