The muscle groups around the knee have an antigravity role and offer knee stabilization during standing position and stability in a variety of different positions. They can be classified based on their anatomic location as well as on their function. The muscles of the thigh and lower leg are comprised of compartments defined as distinct anatomical spaces bordered by fascia or bone. The knowledge of the anatomical boundaries of the compartments is important especially when describing the extension of the soft tissue tumors (e.g., extra- or intracompartmental). The anterior compartment of the thigh is represented by the quadriceps muscle, the sartorius, and the tensor fascia latae. The posterior compartment includes the hamstring muscles (the semitendinosus, the semimembranosus, and the biceps femoris). The medial compartment contains the gracilis and the adductor muscles. The gastrocnemius muscles are included together with the soleus muscle in the superficial posterior compartment of the lower leg.
Functionally, the muscles can be divided into four groups, which produce knee flexion (biceps femoris, semitendinosus, semimembranosus, gracilis, sartorius, and popliteus muscle), knee extension (quadriceps femoris and tensor fasciae latae), internal rotation (popliteus, semitendinosus, semimembranosus, sartorius, gracilis, and medial head of gastrocnemius muscle), or lateral rotation (biceps femoris and the lateral head of the gastrocnemius muscle). Another possibility is to distinguish the muscles around the knee based on their topography. This approach enables an easier interpretation of the MR examination with the muscles classified into three groups: the anterior, the posteromedial, and the posterolateral group.
The normal MR signal intensity of the muscles around the knee is, as with all muscles, intermediate between the signal intensity of fat and cortical bone (Fig. 9.1). The MRI signal intensity differences between the hyperintense thin intermuscular fat planes and the muscle tissue enable the separation between individual muscles or groups of muscles. The tendons appear mainly as hypointense structures in most MR sequences (Fig. 9.1). 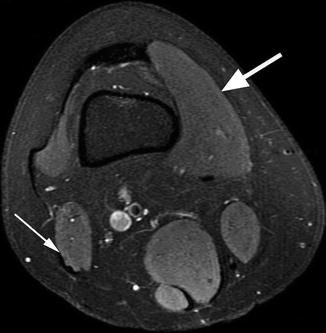 Normal MRI appearance of muscles and tendons in a 33 year old female. Axial proton-density (PD) fat-suppressed image shows the intermediate signal intensity of the muscle (between the signal intensity of fat and cortical bone) (large arrow indicating the vastus medialis muscle). The tendons appear as hypointense structures (small arrow indicating the tendon of the biceps femoris)

The anterior muscle group of the knee or the quadriceps group includes the vastus lateralis, the vastus medialis, the vastus intermedius, and the rectus femoris (Fig. 9.2). The quadriceps muscle and tendon extend the lower leg and play an important role in patellar stability. The muscle is also an important part of the extensor mechanism of the knee, which also includes the medial and lateral patellar retinaculum, patellofemoral and patellotibial ligaments, the patellar tendon, the prepatellar structures, the Hoffa’s fat pad, and the tibial tubercle.

Axial proton-density (PD) fat-suppressed image 8 cm above the joint line (a) and 3 cm above the joint line (b) shows the vastus medialis (VM) and vastus lateralis (VL). The posteromedial group of muscles consists of the sartorius (SA), gracilis (G), semitendinosus (ST), semimembranosus (SM), and medial gastrocnemius (MG). The biceps femoris muscle and tendon (B) and the lateral head of the gastrocnemius muscle (LG) are part of the posterolateral muscle group
The proximal insertion of the rectus femoris is the anterior inferior iliac spine. The vastus lateralis inserts proximally to the greater femoral trochanter and the vastus medialis inserts to the femoral intertrochanteric line. The vastus intermedius has its proximal insertion along the proximal anterolateral two thirds of the femoral diaphysis. Distally, the four muscular elements of the quadriceps converge and fuse 2 cm above the patella to form the quadriceps tendon and inserts on the superior pole of the patella [1]. On MR imaging, the normal quadriceps tendon has a striated appearance with two or three layers in most of the cases (Fig. 9.3) [2]. The superficial layer is formed by the rectus femoris, the intermediate layer is represented by the vastus medialis and vastus lateralis, and the deep layer is formed by the vastus intermedius. The tendon can very rarely be identified on MR images as a homogeneously hypointense structure [1, 2]. 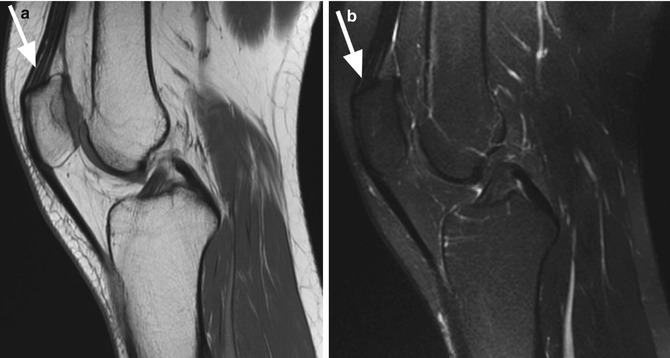 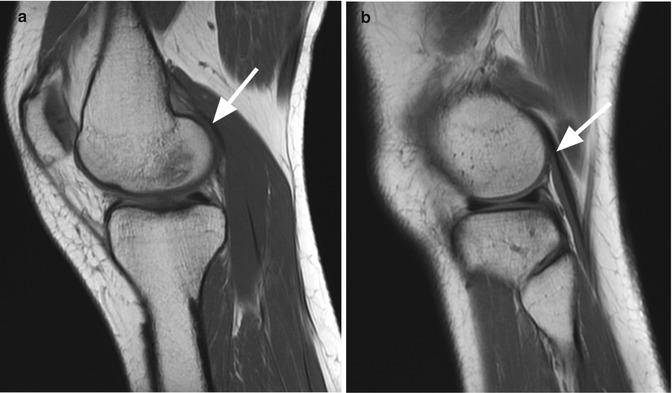 The posterolateral group is formed by the iliotibial band, biceps femoris, popliteus, plantaris, and the lateral head of the gastrocnemius muscle (Fig. 9.2).
The iliotibial band or the iliotibial tract represents a thickening of the fascia lata, which extends from the outer margin of the anterior iliac crest down to the Gerdy’s tubercle and to the head of the fibula (Fig. 9.5). A portion of fascia lata known as the anterior longitudinal expansion merges with the anterior quadriceps aponeurosis, forms the intermediate layer of the lateral retinaculum, and attaches to the patella [3]. The fascia lata is considered an anterolateral knee stabilizer and is tense in both flexion and extension of the knee [4]. 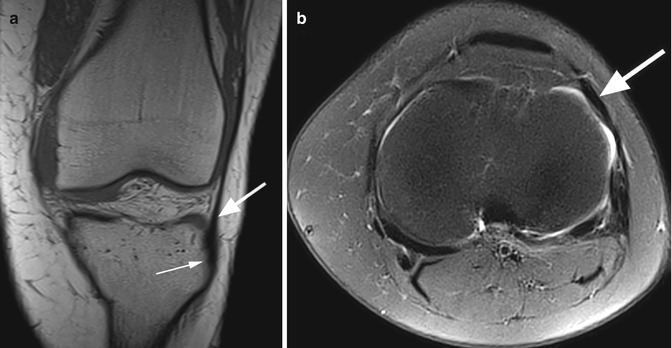 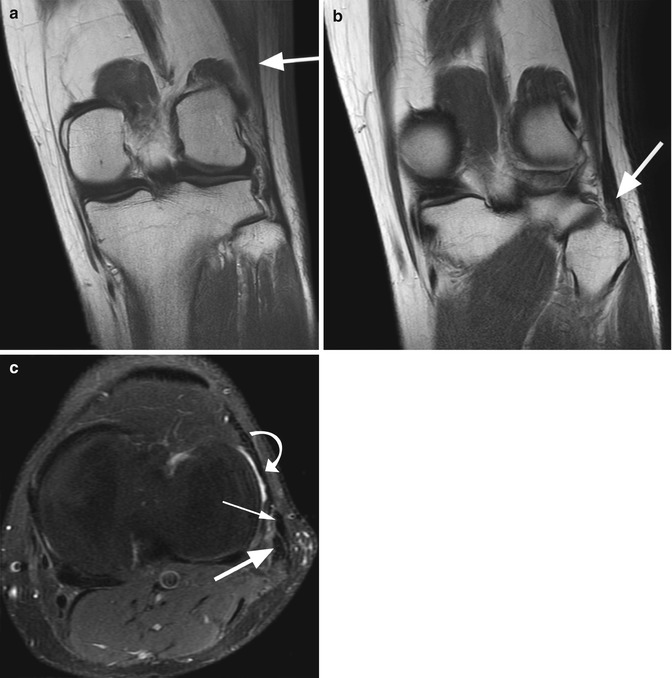 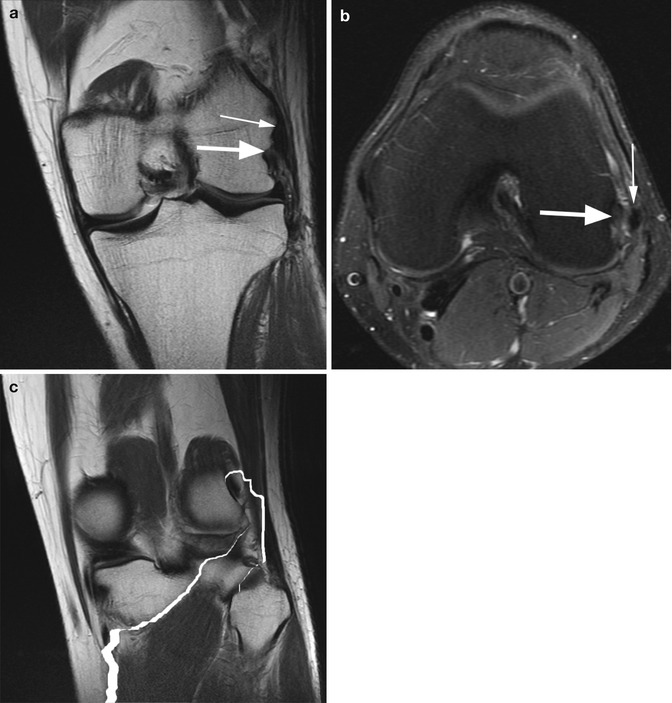 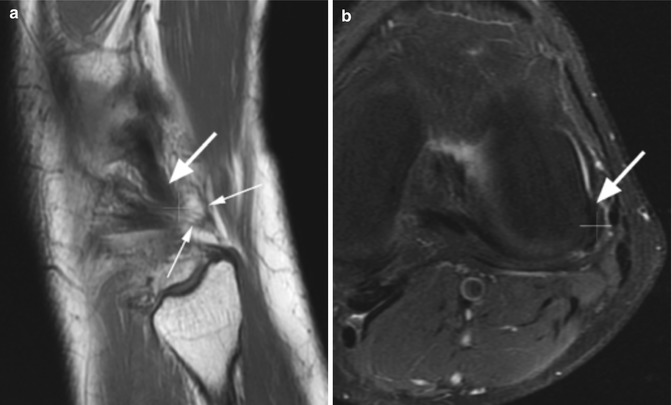 Popliteus muscle and arcuate ligament in a 40 year old male. Sagittal proton-density (PD) image (a) and axial proton-density (PD) fat-suppressed image (b) show the popliteal tendon (large arrows in a, b) joining and the arcuate ligament (small arrow in a) at the level of posterolateral capsule (cross in a, b)
The popliteus muscle alone is responsible for knee flexion and tibial internal rotation of the tibia at the beginning of flexion. Also the popliteal tendon is an important structure of the posterolateral corner of the knee that limits posterior translation, varus angulation, and external rotation [9]. The muscle is connected to the lateral meniscus and the proximal aspect of the fibula. The connection between the medial part of the muscle and the lateral meniscus is ensured by the posterosuperior and anteroinferior popliteomeniscal fascicles (Fig. 9.9). The popliteofibular ligament attaches the popliteus tendon to the fibular head and has a thickness similar to the lateral collateral ligament (Fig. 9.10). 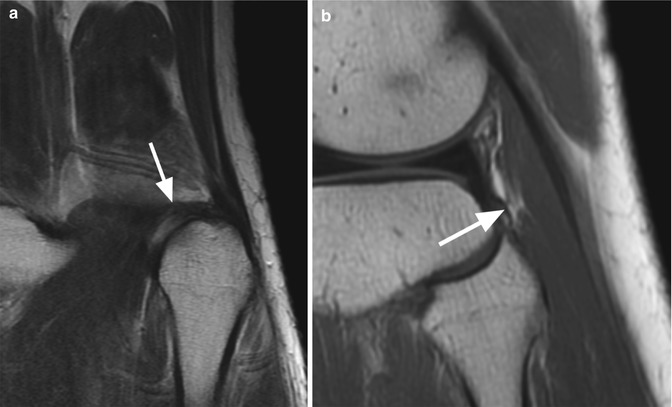 Popliteofibular ligament in a 40 year old male. Coronal proton-density (PD) image (a) and sagittal proton-density (PD) image (b) show the popliteofibular ligament (arrows) connecting the popliteus tendon to the fibular head
The plantaris muscle has the origin on the lateral supracondylar line of the femur (Fig. 9.11), and its long distal tendon inserts on the posteromedial part of the calcaneus. The muscle has a role in flexion of the lower leg at the knee joint.

Plantaris muscle in a 25 year old female. Axial proton-density (PD) image (a) and coronal proton-density (PD) image (b) show the plantaris muscle (star in a, b) originating from the posterior lateral femoral condyle. The muscle is situated at its origin anterior to the lateral gastrocnemius muscle (curved arrow in a)
The lateral head of the gastrocnemius inserts on the lateral femoral condyle and posterior surface of the femur (Fig. 9.4) and extends to the Achilles tendon. Between the lateral head of the gastrocnemius muscle and the posterior horn of the lateral meniscus and the knee capsule, the lateral posterior femoral recess or bursa is present. Besides the role of flexion of the lower leg at the knee joint, it also contributes to lateral rotation.

The tensor fascia suralis muscle originates in the majority of cases from the distal semitendinosus muscle and inserts into the posterior fascia of the lower leg, into the medial head of the gastrocnemius, or via a long and thin tendon onto the Achilles tendon [13, 14]. The muscle is situated superficially between the semimembranosus and semitendinosus.

This accessory muscle has a common origin with the lateral head of the gastrocnemius and inserts distally to the posteromedial capsule [14]. The muscle is seen on axial MR images within the popliteal fossa anterior to the popliteal vessels and nerves and may be of clinical significance in the cases of vascular compression.

MR imaging is the best imaging choice for the assessment of the muscles and tendons around the knee. In acute trauma cases, it is used to target the location, the extension, and the severity of muscle lesions. Placing a skin marker before examination (e.g., a vitamin E capsule) enables the radiologist to correlate the imaging findings with the clinical pain. A correct diagnosis is crucial for a reliable prognosis. The most common muscle injuries are contusions (direct injuries), strains or tears (indirect injuries), and tendinous avulsions.

Muscular contusions are direct acute muscle injuries characterized by lacerations or contusions due to external forces [15, 16]. The most frequently injured muscles are the exposed rectus femoris and the vastus intermedius. Lesions can be clinically graded into mild, moderate, and severe [17]. The patient presents with pain and swelling and, occasionally, with a palpable mass. Contusions may lead to diffuse predominantly intramuscular hemorrhage with the muscle fibers displaced and compressed with or without longitudinal discontinuity. Contusions can lead to severe complications such as acute compartment syndrome, active bleeding, or large hematoma [18]. On MR imaging, the lesions appear as an ill-defined hyperintense area on T2-weighted images with or without fiber discontinuity (Fig. 9.12) or as a well-circumscribed intramuscular hematoma (Fig. 9.12). Intramuscular hematoma displays a homogeneous intermediate-signal-intensity pattern on T1-weighted images slightly higher than that of the normal muscle. Rarely, T1-weighted hyperintense foci of hemorrhage may be seen. On T2-weighted images, acute or subacute hematoma appears as a high-signal-intensity mass (Fig. 9.12). In chronic phases, hematoma appears as an inhomogeneous well-circumscribed lesion on T1-weighted images with hyperintense foci and peripheral hypointense hemosiderin. After contrast administration, chronic hematomas may enhance at the periphery. On T2-weighted images and T2*-weighted images, hematomas are inhomogeneous and hyperintense with areas of low signal intensity and susceptibility artifacts due to blood degradation and heterotopic calcifications. Chronic intramuscular hematomas may mimic the appearance of soft tissue tumors (e.g., sarcomas). Intramuscular hematomas often resorb over a period of 6–8 weeks [19].

Tags: MRI of the Knee
Oct 24, 2016 | Posted by admin in MAGNETIC RESONANCE IMAGING | Comments Off on Muscles and Tendons
Premium Wordpress Themes by UFO Themes
WordPress theme by UFO themes