Malignant primary musculoskeletal tumors represent less than 1% of all cancers. Approximately 2,500 new cases of primary bone malignancies and 6,400 new cases of primary connective tissue malignancies are reported annually in the United States. A malignant tumor located in a bone is much more likely to be a metastasis or multiple myeloma than a primary sarcoma. The average practicing radiologist may see a new primary bone malignancy every few years; many clinicians never see one. Thus, it is often the radiologist who is the physician with the first and best opportunity to suggest the diagnosis and who may guide the initial evaluation and management. Because the prognosis of primary bone and soft-tissue malignancies is often related to the initial management, it is crucial for the radiologist to know both the clinical and the radiologic features of these lesions. As a general rule, patients in whom a primary malignant musculoskeletal tumor is suspected should be referred to a medical center with special expertise. Obtaining the biopsy should be the very last (not first) step in the diagnostic process and is best performed by a member of the multidisciplinary team that will provide the definitive care. A hasty attempt at biopsy that violates and contaminates the otherwise unaffected tissue planes may compromise the definitive procedure and necessitate a more extensive operation with a worse prognosis.

A situation that arises more frequently than the tumors themselves is the discovery of an incidental bone lesion for which a primary malignant bone tumor is a differential diagnostic possibility. It is more important for the radiologist to know with confidence which lesions are not aggressive tumors than to know which specific entity an aggressive bone tumor might be.

The cardinal principle in the diagnosis of solitary bone lesions is that the radiologic appearance reflects the underlying pathology of the abnormal lesional tissue and its interplay with the host bone. The radiologic images are best understood when the underlying pathologic processes are also understood; this principle applies regardless of the particular imaging modality. Knowledge regarding the histogenesis and clinicopathologic classification of many lesions is controversial and in constant flux. However, a few pathologic entities account for the majority of these lesions (Table 7.1). 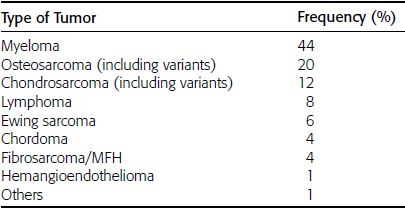 The standard radiologic approach addresses four issues: (a) patient factors, especially age; (b) location within the skeleton and within the involved bone; (c) rate of growth or aggressiveness; and (d) tissue characterization from specific features such as mineralization. Careful consideration of these factors may lead to a diagnostic conclusion that is almost certain. Often, however, the diagnosis can only be narrowed to several entities or may even be completely uncertain.

In many musculoskeletal lesions, the pathologic examination is not sufficient to provide a definitive diagnosis. In many cases, the radiologic appearance and clinical course of the lesion are equally important. Thus, if a lesion has specific radiologic features that narrow the differential diagnosis, the radiologist should be prepared to defend his or her diagnosis—even in the face of a contrary opinion from the pathologist.

Most bone lesions tend to affect particular age groups. Therefore, knowing the patient’s age is often valuable in distinguishing among lesions with similar radiologic features or lesions with nonspecific appearances (Table 7.2). Many lesions affect a broad age range. Most bone lesions are more common in men (Table 7.3). A few precursor conditions increase the risk of developing a bone malignancy (Table 7.4).

For each age range, the tumor types are listed in order of frequency and account for over 90% of the primary tumors.MFH, malignant fibrous histiocytoma. 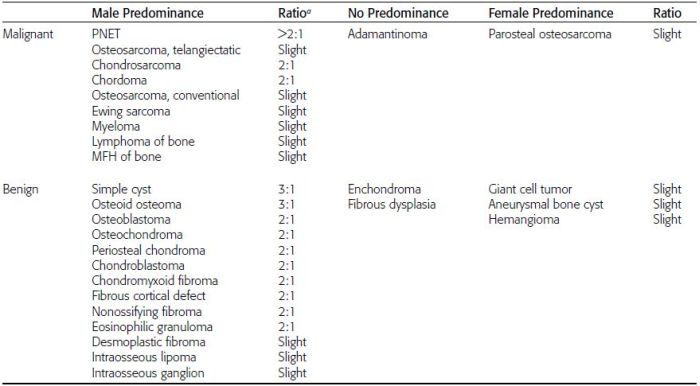 aRatios are approximate and rounded.

TABLE 7.4 Precursors of Malignancy in Bone

The location of a lesion within the skeleton and within the involved bone may have considerable differential diagnostic significance (Tables 7.5 and 7.6). The site of origin of a large, extensive lesion may be difficult to localize. Although there may be considerable variability in location, tumors of a given cell type seem to arise preferentially at sites where the homologous normal cells are most active.

Proliferative bone is a reaction to the lesion by the host bone. This reaction can be endosteal, within the bone, or periosteal, on the cortical surface. A sclerotic rim is a layer of dense endosteal reactive bone surrounding the lesion and separating it from the normal adjacent bone (Fig. 7.4). A sclerotic rim implies that the growth rate of the lesion is slow enough for new bone to form around it and confine it. An expanded cortical shell is a layer of periosteal new bone that confines a lesion that has already destroyed the cortex and expanded beyond the original contour of the bone (Fig. 7.5). The periosteal new bone is formed as the endosteal surface of the cortex is destroyed; the faster the cortical destruction and expansion of the lesion, the thinner is the cortical shell. An expanded shell may have ridges or trabeculations on the endosteal surface, reflecting an uneven growth rate. Nodules of tumor have grown more rapidly beneath the thinner areas of bone and less rapidly where the trabeculations are located. True bony septations that divide a lesion into compartments are rare. If a lesion expands so rapidly that the periosteal bone response cannot keep up, a shell will not be visible. Mottled sclerosis, scattered throughout the cancellous bone adjacent to a lesion, suggests disorganized reactive bone formation in the presence of an aggressive, fast-growing lesion.

FIGURE 7.6. Geographic destruction and cortical penetration with Codman triangle (arrow) in the distal femur (osteosarcoma). There is a medial soft-tissue mass (arrowheads) with a faint sunburst periosteal reaction.