This chapter describes the radiology of tumors that are metastatic to bone or soft tissue.

More than 95% of adult patients with malignant disease involving bone have metastases rather than myeloma or primary bone sarcomas. The prevalence of bone involvement in autopsy series of cancer patients ranges from 3% to 85%, depending on the site of origin and the thoroughness of the postmortem search. With improving cancer treatments and longer patient survival, more and more cancer patients will have skeletal involvement by the end of their clinical course. Most skeletal metastases occur in middle-aged and elderly patients with primary cancers of the prostate, breast, lung, or kidney. In men, prostate malignancies account for 60% of patients with skeletal metastases; in women, breast malignancies account for 70% (Table 10.1). In children with osseous metastases, neuroblastoma is the most common primary lesion (Table 10.2). The relative incidence of primary tumors that are likely to metastasize to the bone may be affected in the future by the rising incidence of lung cancer among women (due to smoking), the decrease in the proportion of advanced breast cancers (due to screening mammography), and the increasing incidence of breast and prostate cancers overall (due to an aging population). Most skeletal metastases are subclinical and asymptomatic. When symptomatic, they present as bone pain or pathologic fractures. Bone pain ranges in severity from minimal to extreme and intolerable, but skeletal metastases are themselves rarely a cause of death.

TABLE 10.1 Frequency of Primary Sites Among Adults with Skeletal Metastases 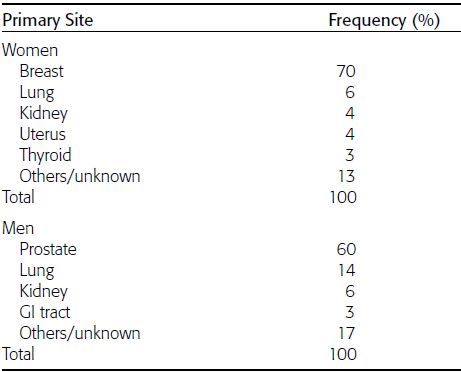 TABLE 10.2 Primary Tumors in Children That May Metastasize to Bone

In the radiologic evaluation of metastatic bone tumors, less emphasis is placed on complete anatomic delineation of individual lesions and more on discovering sites of disease and planning and following the course of palliative therapy. Sometimes, a skeletal metastasis is the initial presentation of malignant disease in a patient whose primary site is asymptomatic or minimally symptomatic. Occult primary tumors that present with bone metastases are usually kidney, lung, and gastrointestinal tract lesions. Only in select cases does locating the primary tumor benefit the patient, because in most instances, the prognosis has already become unalterable by metastatic dissemination. In most cases, the primary tumor is never located, even at autopsy. Biopsy of the skeletal metastasis in these circumstances often shows adenocarcinoma without organ-specific features.

Tumor cells gain access to the skeleton by (a) hematogenous spread through the arterial circulation, (b) retrograde venous flow, and (c) direct extension. The portions of the skeleton that contain red marrow have a rich vascular supply, and tumor emboli frequently lodge within the sinusoidal channels found there. Tumor spread through retrograde venous flow occurs in the valveless vertebral plexus of Batson. This venous plexus interconnects the spine, the ribs, and the pelvis, providing access to the axial skeleton. Blood flow through the plexus may be transiently reversed by increased intra-abdominal pressure caused by activities such as coughing. Direct extension is much less frequent than hematogenous spread; when it occurs, it is usually an extension of an intrathoracic tumor to the chest wall, an intrapelvic tumor to the pelvic wall, or a retroperitoneal process to the lumbar spine. For practical purposes, lymphatic spread of tumor to the bone does not occur.

Metastases in the cancellous bone of the axial skeleton and in the cancellous metaphyseal bone of the proximal femur and proximal humerus account for nearly 90% of lesions, a distribution that is related to hematogenous spread. Metastases to the spinal column usually involve the vertebral body rather than the posterior elements. They are more common in the lumbar region than the thoracic region and least common in the cervical region. Metastases are distinctly uncommon distal to the knees or elbows. Approximately 90% of patients with bone metastases have multifocal involvement.

Skeletal metastases are common around joints, especially the hips, shoulders, knees, and intervertebral disks. Periarticular metastases with subchondral, intra-articular, or synovial extension may have a clinical presentation that simulates inflammatory arthritis. Lesions in the hands or feet are relatively rare and usually come from primary lung cancers. The intervertebral disk is a relative barrier to the spread of tumor, so that the usual pattern of vertebral metastatic involvement is vertebral destruction with preservation of the disk, even when multiple contiguous vertebral levels have tumor. It is very unusual for the disk to be involved by tumor. Coexistent degenerative disk disease is frequent and may be caused or exacerbated secondarily by the presence of tumor. In the subchondral region of the vertebral body, a metastasis may interfere with the nutrition of the disk or weaken the end plate so that the disk material herniates through. The former process produces degenerative disk disease, and the latter produces a Schmorl node.

The appearance of a bone metastasis on radiographs reflects the balance of bone destruction and bone formation (Table 10.3). Metastatic tumors secrete osteoclast-stimulating factors; the osteoclasts excavate a defect in the bone where the metastasis establishes itself. The osteoclasts are not part of the tumor mass but can be found at the periphery, sometimes separated by the fibrous tissue. Growth of the tumor is preceded by osteoclastic bone resorption. When bony trabeculae have been completely engulfed, tumor can destroy the bone directly by elaborating enzymes. Osteoclast proliferation and osteoclastic bone resorption occur in all bone metastases, regardless of whether they also form the bone. Bone formation may occur as stromal bone formation or as reactive bone formation. In those tumors associated with an acellular fibrous stroma, osteoprogenitor cells form the bone under the influence of osteoinductive humoral factors secreted by the tumor. Metastases from prostatic carcinoma produce a fibrous stroma and form the bone in this way; metastases from breast and lung carcinomas do not. In reactive bone formation, immature woven bone forms at the same time that bone destruction occurs. Proposed mechanisms for reactive bone include a mechanical response to weakening of the bone by the growing metastasis, an attempt by the bone to contain the lesion, or perhaps an uncoupling of the humoral factors that normally control the bone formation and resorption. 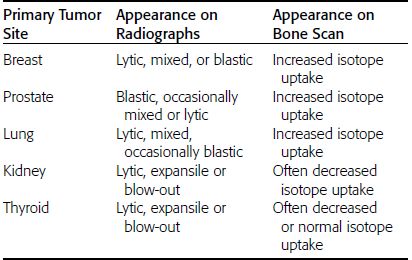 Lytic lesions correspond to destruction and replacement of the bone by nonmineralized tumor, without appreciable bone formation. The pattern of destruction may be geographic, permeated, or moth-eaten, and although there is a rough correspondence to increasing biologic aggressiveness, all patterns may be present in the same patient when extensive disease is present (Figs. 10.1 and 10.2). Because 30% to 50% of bone mineralization must be lost before a lesion becomes visible on the plain film, widespread lytic metastases may be inapparent on radiographs. Blastic lesions correspond to bone formation in or around tumor implants through reactive bone proliferation or ossification in fibrous stroma. Reactive apposition of the new bone on cancellous bone surfaces results in a dense, blastic appearance. Proliferation of new endosteal bone is seen as endosteal thickening or irregular densities projected over the marrow cavity. Deposition of periosteal new bone causes cortical thickening or layers of periosteal new bone. Metastatic lesions usually do not stimulate periosteal new bone, and when they do, the periosteal bone tends to be scanty. The pattern of reactive bone proliferation generally reflects the tumor’s growth rate, with highly anaplastic, fast-growing tumors and marrow element malignancies (myeloma and leukemia) provoking no radiographically appreciable reactive bone. Blastic metastases tend to have a dense homogeneous appearance with margins that fade imperceptibly into the normal bone (Figs. 10.3 and 10.4). Mixed lesions contain both lytic and blastic areas, reflecting bone destruction and bone formation in different portions of the same lesion (Fig. 10.5). In fact, both processes occur simultaneously in virtually all metastases.

FIGURE 10.3. Blastic metastases from breast carcinoma in the intertrochanteric region of the femur. A: A homogeneously dense blastic lesion (arrow) with poorly defined margins. B: Bone scan shows increased radionuclide accumulation in the lesion (arrow) and in the ipsilateral acetabulum.

FIGURE 10.4. Diffuse blastic metastases from prostate carcinoma throughout the pelvis and proximal femurs.

Radionuclide bone scan is more sensitive than radiographs for detecting metastases but has lower specificity. Radionuclide bone scanning agents such as technetium-99m methylene diphosphonate accumulate in new reactive or stromal bone (Fig. 10.6; see Fig. 10.3). The metastasis itself may not accumulate the tracer unless the primary lesion forms the bone or cartilage. Most lytic lesions, as well as all blastic and mixed lesions, have enough new bone formation to appear as areas of intense uptake on scans. If the activity in the reactive and stromal bones is equal to that of a normal bone or if the metastasis is in the marrow space but does not affect the bone, the scan is falsely negative. If a bone is destroyed and replaced by tumor without provoking detectable reactive bone, an area of decreased uptake may result. Anaplastic, purely lytic lesions tend to have decreased uptake. A “superscan,” that is, diffuse increased radionuclide accumulation throughout the entire skeleton, can indicate diffuse osseous metastatic disease.

Positron emission tomography (PET) using 18-fluorodeoxyglucose (18F-FDG), a radioactive-labeled glucose analog that permits imaging based on the metabolic rate, has considerable utility in oncologic imaging. With regard to screening for skeletal metastases, compared with the radionuclide bone scan, PET with 18F-FDG appears to have a higher sensitivity and higher specificity for detection of osteolytic metastases. Osteoblastic metastases and osteosarcoma metastases appear to have lower metabolic rates than osteolytic metastases, and the radionuclide bone scan appears better than PET in these circumstances. PET/CT has the additional advantage of combining the sensitivity and specificity of PET with the spatial resolution of CT (see Fig. 10.5).

CT may show the extent of bone involvement more clearly than radiographs (Fig. 10.7). Delineation of the extent of cortical involvement is important when prophylactic internal fixation is contemplated. In addition, CT may show tumor in the marrow spaces in the absence of bone destruction. Increased attenuation in the medullary cavity reflects replacement of the fatty marrow by tumor, edema, or reactive mesenchymal tissue (Fig. 10.8).

FIGURE 10.8. Marrow space metastasis in the left femur (arrow) from lung cancer demonstrated by CT. The bone scan was negative in the region of this lesion.

On MRI, metastatic lesions are seen as focal areas of abnormal signal replacing the normal marrow signal (Fig. 10.9). Metastases are usually distinguishable from normal tissue unless the metastases are so extensive that normal marrow signal is absent. On T1-weighted images, metastatic foci have low signal intensity; on T2-weighted images, they have high signal intensity; following intravenous gadolinium, they enhance. Opposed phase MR sequences can be used to assess for obliteration of the normal marrow fat which is typically seen with tumors. When fat and water are present in the same voxel, such as with red bone marrow, then signal dropout will be seen on the out-of-phase image compared with the in-phase image. Metastases obliterate the marrow fat, thus having roughly the same signal intensity between in-phase and out-of-phase images (Fig. 10.10). MRI is more sensitive than bone scan and has superior anatomic detail. Whole-body MRI has been used for detection of bone metastases in children and young adults, using spin echo T1-weighted and inversion recovery sequences. MRI is the best examination for investigating acute spinal cord symptoms in patients with known metastatic disease and for screening the spine when the bone scan is negative and profound osteopenia is present (Fig. 10.11). MRI may also be particularly helpful in making decisions about staging and treatment when a solitary lesion is found on a screening bone scan and radiographs are normal.

FIGURE 10.9. Metastases to the lumbar spine, pelvis, and femurs from breast carcinoma. A, B: Coronal T1-weighted and inversion recovery MRI shows scattered, focal lesions in the marrow.