Schematic drawing that shows the measurements for NASCET and ECST criteria


It is widely accepted that average Doppler velocity rises in direct proportion to the degree of stenosis, Therefore, the internal carotid artery peak systolic velocity (PSV) and the end-diastolic velocity (EDV) can be used to identify hemodynamically significant carotid stenosis [15]. Maximal PSV and EDV are taken within the narrowing. The cutoff for the hemodynamically significative stenosis is expressed in Table 2. There are some differences between various authors in the definition of the cutoff threshold, ranging between 220 and 283 for NASCET criteria [14, 15], Heijenbrok-Kal (2005), [16].

It’s evident that, in a minor number of patients, the alternative use of NASCET or ECST criteria can produce a different surgical decision. NASCET criteria are just based on the narrowing of the hematic column in the carotid axis, and a stenosis is detected when there is a reduction of this column diameter compared to the distal internal carotid artery. ECST criteria instead compare the maximum narrowing with the entire internal carotid diameter at the same level. Paradoxically, considering the normal anatomical dilatation of the origin of the internal carotid artery (carotid bulb), a plaque that intersects just the dilated part of the bulb without reducing the lumen with respect to the distal internal carotid artery determines a 0 % stenosis using NASCET criteria, while using ECST criteria the stenosis is detected (Fig. 2). If we consider that the risk of cerebral ischemia is consequent at the embolic potential of the plaque, in some cases NASCET criteria could underestimate the real situation. Due to the different systems of calculating, the percentage of stenosis results generally higher using ECST method.

Different criteria can produce different surgical decision
In the last years the role of plaque’s morphology is emerging in the evaluation of embolic risk (Fig. 3). The assessment of a stenosis is just one of the elements useful in the prediction of the clinical outcome. Ouhlous [17] and Nandalur [18] in 2005 pointed out the relationship between the composition of the carotid plaque and the risk of cerebrovascular ischemic events. Ohara in 2008 demonstrated that eccentric stenosis was associated with a significant increase of ipsilateral ischemic events compared with concentric stenosis. The “vulnerable” carotid plaque is characterized by a higher tendency to rupture, potentially resulting in embolization and consequent cerebral ischemia [19]. 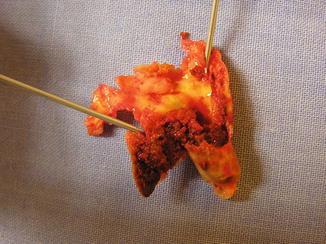 Macroscopic view of the carotid specimen showing a typical feature of vulnerable plaque: the intra-plaque hemorrhage (IPH)
Therefore, characterization of the plaque morphology can be important for the surgical decision, mostly in patients with borderline level of stenosis.
Ultrasound morphologic evaluation of the carotid plaque identifies the various plaque components. In particular, anechogenic plaques have a higher component of soft tissue, such as lipid or intra-plaque hemorrhage, while echogenic plaques are composed mainly of fibrous tissue. The Gray-Weale’s scale modified by Geroulakos can identify five types of carotid plaques: type 1 (anechogenic with echogenic fibrous cap), type 2 (predominantly anechogenic but with echogenic areas representing less than 25 % of the plaque), type 3 (predominantly hyperechogenic but with anechogenic areas representing less than 25 % of the plaque), type 4 (echogenic and homogeneous plaque), and type 5 (unclassified plaques reflecting calcified plaques with areas of acoustic shadowing which hide the deeper part of the arterial layers).
Another aspect of plaque morphology is represented by the analysis of the plaque surface. A smooth surface indicates a plain interface between the plaque and the lumen. The presence of plaque surface irregularities is related with an increased risk of ischemic events [20, 21]. But the most relevant surface alteration is the ulceration, defined as an intimal defect larger than 1 mm that expose the necrotic core of the atheromatous plaque [22]. The presence of plaque irregularities or ulceration (Fig. 4) exposes to major risk of embolization due to possible platelet aggregation and thrombosis or embolic release of the lipidic plaque core. Therefore, the presence of a “vulnerable plaque” should be carefully evaluated for surgical treatment also in patients with noncritical stenosis. 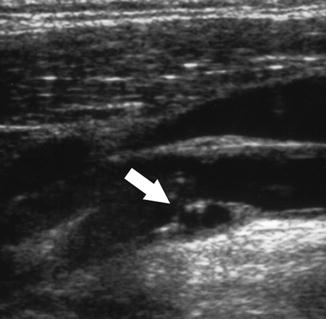 Longitudinal US view of an ulcerated (white arrow) carotid artery plaque at the level of carotid bifurcation
Multi-detector computed tomography angiography (MDCTA) is a reliable tool for the evaluation of carotid atherosclerosis (Fig. 5). It’s generally used after ultrasound analysis. 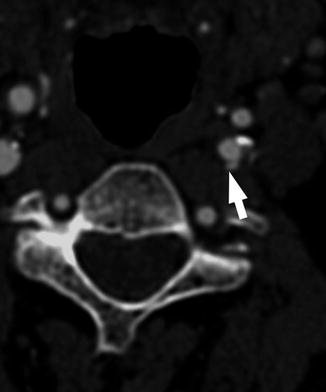 MDCTA axial view of an ulceration involving the ICA of the left side
In addition to the calculation of the stenosis percentage, it’s useful in the detection of plaque irregularities and especially of ulceration with diagnostic accuracy higher than US-ECD [23]. Moreover, measuring Hounsfield unit (HU) attenuation in the carotid plaque is useful to categorize the plaque, also in case of calcification.
In alternative to CT, MR, with different acquisition techniques, is useful to obtain information about the percentage of stenosis and plaque characteristics. Extending the study to the encephalic district, it’s possible to evaluate the status of the circle of Willis. The presence of two or more interruption in the circle of Willis appears to be associated to high risk of intolerance to cross-clamping [24] (Fig. 6). 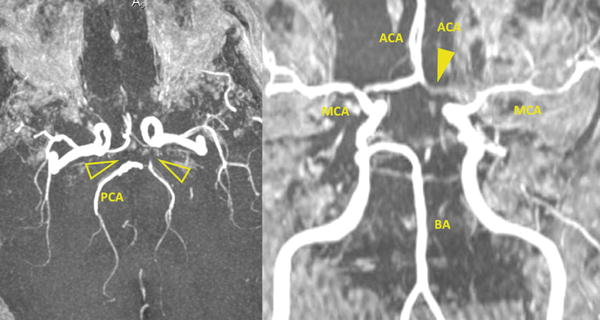 MRA TOF (time-of-flight sequence) in the axial and coronal views that show the circle of Willis configuration (BA basilar artery, MCA middle cerebral artery, ACA anterior cerebral artery, PCA posterior cerebral artery). In this patient there is no A1 segment of the left ACA (yellow arrowhead) and both the PcoA (yellow open arrowheads). Moreover, there is no flow in the left PCA. This patient showed cross-clamping intolerance during the carotid endarterectomy procedure requiring the shunt positioning during the surgery
CT and MR are also useful in the evaluation of cerebral parenchyma. Sometimes also in clinically asymptomatic patients, these examination can reveal areas of previous ischemic cerebral lesions. CT and MR provide the surgeon very important information about overall anatomy of the area. Carotid endarterectomy can be quite simple or extremely difficult due to the wide variability of anatomical disposition. In particular, a “high” bifurcation with a longitudinal extended vulnerable plaque in a deep internal carotid artery can represent a very challenging struggle. Considering that carotid endarterectomy is a preventive intervention, often performed in asymptomatic patients, the availability of the maximum level of information is extremely useful in order to minimize the risk of intraprocedural complications.

The intervention begins with an incision of 10–12 cm along the anterior border of the sternocleidomastoid muscle, centered at the level of carotid bifurcation. Cutting the platysma, it exposes the sternocleidomastoid muscle whose anterior margin is freed and retracted posteriorly. The vascular phase begins; hence, it is useful to magnify in order to identify the thin nerve structures that with great variability cross and surround the vascular structures and that must be mobilized and resected. The internal jugular vein is found and the common facial vein is isolated, ligated, and divided. At this point the common carotid artery is located by palpation. After cautious incision of the vascular sheath, the adventitial plan is joined, and the common carotid artery is freed and passed with a vascular loop. The opening of the vascular sheath is progressively extended toward the bifurcation that is widely exposed; then the external carotid artery is isolated and encircled with a vascular loop. Sometimes the superior thyroid artery – normally the first branch of the external carotid artery – originates directly from the common carotid artery at the bifurcation level and needs to be isolated and passed with a loop. With gentle traction on the external carotid artery, the internal carotid is exposed and can be freed along the adventitial plan, avoiding damage to the nervous structures (Fig. 7) that lie near this vessel (in particular the hypoglossal nerve with its descending branch and the vagus nerve). The internal carotid artery needs to be prepared extensively until the end of the carotid plaque, with at least 1 cm of healthy distal carotid for a safe clamping. 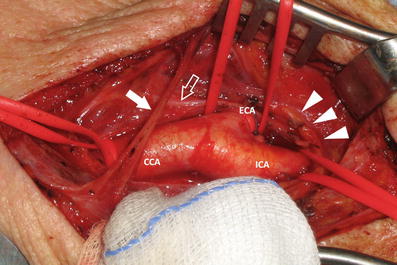 Surgical exposition of the carotid bifurcation during the carotid endarterectomy procedure. The CCA, ICA, and ECA are visible together with the hypoglossal nerve (white arrowheads), the ansa cervicalis (white open arrow), and the transverse cervical nerve (white arrow)
In most of the cases, the end of the plaque can be assessed both with visualization and gentle palpation. Preoperative imaging can be very helpful on this point, in order to avoid hazardous handling of the carotid plaque. Also the internal carotid artery is passed with a vascular loop. In case of “high” bifurcation, with a plaque very longitudinally extended, the exposure of the internal carotid artery can require complex maneuvers like mobilization of the hypoglossal nerve, division of the digastric and stylohyoid muscle, retraction of the parotid gland, subluxation of the mandibular condyle, and others skill that can require a multidisciplinary approach. Fortunately, these cases are very rare. The exposition concluded that the patient is heparinized.
At this point, the internal, external, and common carotid arteries are sequentially clamped. After cross-clamping, it’s mandatory to acquire information about tolerance to carotid cross-clamping. In fact, about 10–20 % of the patients don’t tolerate the interruption of the flow and show symptoms of cerebral ischemia. In the patient operated under local anesthesia, symptoms are quickly detected: in most of the cases there is loss of consciousness, mental confusion, and inability to squeeze a rattle in his or her contralateral hand. In the patient operated under general anesthesia, information about cross-clamping intolerance is obtained with continuous intraoperative electroencephalographic monitoring or with somatosensory-evoked potential monitoring. Information about intracranial circulation can also be obtained both intraoperatively via transcranial Doppler [25] and with near-infrared spectroscopy [26].
The onset of intolerance of carotid cross-clamping requires immediate positioning of a temporary shunt in order to ensure an adequate vascular flow avoiding cerebral damages. In that case, after a wide arteriotomy that extended from the distal common carotid artery up to the end of the plaque in the internal carotid artery, the shunt (usually the Pruitt-Inahara shunt or the Javid shunt) is inserted – previous rapid removing of the clamp – before in the internal carotid artery and then in the common carotid artery. Both ends of the shunt are stabilized (the Pruitt-Inahara shunt inflating the balloons near the extremities, the Javid shunt with tourniquets). In most of the cases, the shunt positioning is followed by rapid restoring of the cerebral functions, easily recognizable with clinical (local anesthesia) or instrumental (general anesthesia) signs.
Only gold members can continue reading. Log In or Register to continue