In patients with pain and swelling after trauma to the extremities, ultrasound examination of the bone surfaces is important for diagnosing occult or undetected fractures [1].

20.2 Intersection Syndrome with Fluid in the Sheaths of the Second and Third Compartments 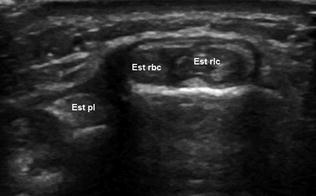 20.3 Allergic Tenosynovitis of the Extensor Tendons

A 32-year-old patient was operated on for a ganglion of the radiocarpal joint and developed an allergic reaction to the sutures. Clinically, he presented with pain and swelling on the volar side of the wrist. Ultrasound showed tenosynovitis of the extensor digitorum communis, extensor indicis proprius, and extensor carpi radialistendons (Fig. 20.3).

Allergic tenosynovitis of the extensor digitorum communis, extensor indicis proprius (Est cd-pi), and extensor carpi radialis brevis and longus (Est rbc and Est rlc) tendons. Sonography shows fluid within the tendon sheaths (a) and hypervascularization (b)
Tenosynovitis is characterized by inflammation of the synovial sheath. Sonography is a valuable tool for diagnosing and evaluating damage to the extensor tendons and their sheaths [3].

A 9-year-old ballet dancer presented with pain over the right radial styloid that was exacerbated by movement of the thumb. Sonography showed hypoechoic thickening of the retinaculum, fluid within the sheath of the extensor pollicis brevis tendon, and fibrous septation of the first compartment. The abductor pollicis longus tendon had multiple terminal laminae (Fig. 20.4). 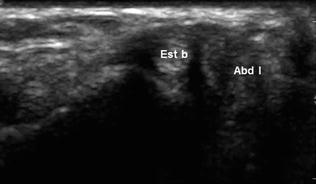 De Quervain’s disease. Sonography shows hypoechoic thickening of the retinaculum and fluid within the sheath of the extensor pollicis brevis tendon (Est b) in a patient with fibrous septation of the first compartment. The abductor pollicis longus tendon (Abd l) has multiple terminal laminae
Anatomic studies have documented the existence of variations in the number of tendons and the division of the first extensor compartment. Sonography can be used to identify several types of anatomic variations in patients with de Quervain’s disease [4].

20.5 Intersection Syndrome in a Patient with Tenosynovitis Involving Only the Extensor Carpi Radialis Brevis

In this patient with left distal forearm pain, ultrasound disclosed an effusion within the sheath of the extensor carpi radialis brevis tendon (Fig. 20.5).

A 72-year-old patient developed pain and paresthesias over the lateral aspect of the wrist after cephalic vein cannulation. Sonography showed enlargement and hypoechogenicity of a branch of the radial nerve (Fig. 20.6). 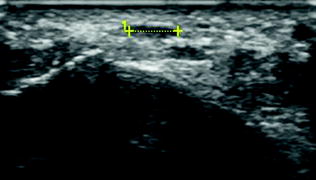 20.8 Carpal Tunnel Syndrome in a Patient with a Bifid Median Nerve

A 34-year-old patient with symptoms of median nerve compression in the carpal tunnel. Ultrasonography showed tenosynovitis of the flexor tendons and an anatomic variation of the median nerve (bifid median nerve) (Fig. 20.8). 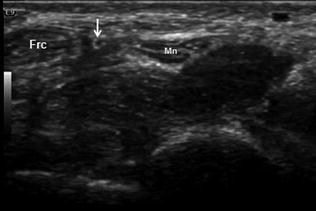 Palmar cutaneous nerve encasement after trauma. Sonography reveals encasement of the palmar cutaneous branch (arrow) of the median nerve (Mn) by scar tissue
Only gold members can continue reading. Log In or Register to continue