Comparison of magnetic resonance and computed and SPECT tomography images

Nuclear medicine has become ingrained into the arsenal of diagnostic means of modern pediatric establishments. Its distinctive feature is functionality of radionuclide methods. Although gamma-ray images do not feature such a high space resolution as CT or MRI images, they are capable of reflecting pathophysiological and metabolic alterations occurring within the body by means of volume RP distribution in the body, as RPs concentrate in certain organs and form hyperfixation foci.
The number of radionuclide examinations (conventional NM) has been doubling every 3–5 years in the developed countries in the recent years; it is now ca. 10 per 1000 persons. Despite intensive development of other instrumental diagnostic methods, this level has not decreased yet due to the fact that radioisotope diagnosis is primarily a functional and biochemical examination and helps to detect many diseases at such early stages when other methods are insufficiently informative.
Nuclear medicine has been being especially dynamically developed since 1963, when H.O. Anger invented a gamma-ray chamber – a fundamentally new device designed to obtain gamma-ray images, which is based on the use of radionuclide ionizing radiation. The principal design principle of gamma-ray chambers (large flat scintillation crystal with photomultipliers above it) makes the device capable of 3 types of radionuclide examinations: radiometry, radiography, and imaging. Gamma-ray chambers ensure immediate registration of the in vivo administered RP radiation without moving a detector over the patient, high space resolution, and radiation registration rate. Radionuclide imaging (scintigraphy) includes several methods of obtaining images reflecting distribution of labeled compounds within the body. These substances – radiopharmaceuticals (RPs) – are intended to observe and assess visceral physiological functions. According to a range of authors, one of the possibilities of nuclear medicine is creation of body metabolite-based RPs; use of such RPs will provide radionuclide diagnosis with a way to map functional processes and the change rates thereof occurring in a patient’s body similar to metabolic pathway maps. In this case RP fixation will demonstrate viability and functional activity of the tissue or organ under analysis.
There are more than 100 radionuclides used to produce RPs for nuclear medicine. However, only technetium-99 m (99mTc), iodine-123 (123I), as well as thallium (201 T1 and 199 T1) and gallium (67Ga citrate) nuclides have maintained practical value for radionuclide diagnosis, as their physiochemical and biological properties make them optimal to perform single-photon gamma-ray examinations in children.
Combined SPECT/CT and PET/CT systems have been becoming common in pediatrics in recent years. For example, modern gamma-ray chamber Discovery NM/CT 670 is a combined SPECT/CT system integrated into a single gentry and capable of producing a high-quality combined image of functional and morphological patterns (Fig. 18.2).

Comparison of SPECT and CT images and a hybrid SPECT/CT image, which helps to determine topography of the pathological focus

18.3 Nuclear Medicine at the Scientific Center of Children’s Health (SCCH)

At the moment, the Center has 5 MR tomographs (10.35 T tomograph, 31.5 T tomographs, and 13 T tomograph), 3 multispiral CTs (160–320 slices), more than 20 expert US systems, a digital mammography system (1 MRI of 0.35 T, 3 MRI – of 1.5 T, 1 MRI – of 3 T), 3 bone densitometers, 5 digital radiodiagnostic systems, and 2 digital angiographs.
The principal technical means of radionuclide diagnosis at the SCCH is expert integrated gamma-ray chamber Millennium MG (USA). In package with a specialized computer system (workstation Xeleris 3) (GE Healthcare, USA), the gamma-ray chamber helps to perform all types of in vivo radionuclide examinations using the standard integrated processes for different data accumulation modes. The examinations performed with such devices are known as single-photon emission computed tomography (SPECT). Whereas X-ray (transmission) tomography is based on obtaining computerized images of body “slices” after processing information on X-ray (external) radiation absorption by tissues, SPECT helps to visualize distribution of the RP administered to the examination subject in the form of two-dimensional planes.
In order to produce RPs we use nuclide generators intended to produce radionuclide pharmaceuticals numerous times directly at the site by means of separating genetically related – parent and daughter – radionuclides. The latter usually has a shorter half-life and is being continuously generated from the parent one. Generators are convenient as the personnel may transport them and subsequently separate the daughter nuclide ex tempore directly at a diagnostic laboratory. The most common radionuclide in pediatrics is technetium-99 m (99mTc) as it has the scintigraphy-perfect monoenergetic gamma radiation spectrum. Use of short-living 99mTc with half-life of 6 h and soft γ-radiation of 140 keV makes the diagnostic procedure radiologically safe, as it reduces the pediatric patient’s radiation exposure tens of times.
We use GT-2 M generators 99mTc activity of 5.5 GBq on the day of delivery, which ensure generation of an eluate featuring high and stable output of technetium-99 m throughout the lifetime. This nuclide is convenient for clinical use, as it easily forms complexes with the compounds tropic to tissues of various organs. We also use special commercially available vialed lyophilisate sets for clinical practice: technefor (technetium oxabifor), technephyte (technetium phytate), technetril (technetium sestamibi), technemek (technetium succimer), technemag, pentatech (calcium trisodium pentetate), bromezida (mebrofenin) etc. 99mTc-based RP compounding usually consists in simple concoction of a lyophilisate and the eluate, although specific manipulations may sometimes be required.
The specific apparatus present the obtained data on the dynamics of physiological processes as follows:

According to our data, radionuclide diagnosis is the most informative and cost-effective method of functional examination of various organs with high specificity and sensitivity in pediatrics. Analysis of diagnostic gamma-ray chamber examinations demonstrated that 46 % there of have been scintigraphic examinations of kidneys and urinary organs, 19 % of the liver, 17 % of the heart, 14 % of the lungs, 2.6 % of the skeletal system, and 1.4 % of the thyroid gland and testicles.

Functional radionuclide kidney examination-renograthy which is based on registration of the intravenously administered RP – 99mTc technemek (DMSA) with activity of 80–600 MBq, which is selectively captured and excreted from kidneys – gamma radiation over kidneys.
Depending on the indication, we take a single image (static mode) or series of consecutive images at different points in time (dynamic mode). Static nephroscintigraphy is used to measure shape, dimensions, and volume of kidneys as well as to determine RP distribution, specific activity, and integral capture index. Dynamic scintigraphy shows activity in the renal microcirculation (perfusion) directly after RP administration, transfer thereof to renal tubules (glomerular filtration) after that, and gradual activity decrease due to urine runoff in the end, which is why it is used to determine the following parameters in children: functional RP distribution (“interest zones”), activity/time curves (renograms), and 2-min capture (indicator of the functioning tissue amount).
Along with that, we have proposed a method of measuring the amount of RP captured by each kidney and both kidneys in tote (RF patent No. 2392968), which helps to rapidly detect the renal functioning tissue amount (FTA) changes in patients with various forms of renal pathologies. This method helps to reduce duration of examination, as the renal FTA measurement requires lower (3.2 times) radiation exposure of the patient and does not require interruption of gamma-ray image recording or radioactive decay correction.
A healthy child’s renogram consists of three characteristic segments: segment 1 (vascular), initial steep curve upturn for 40–50 s considered to be a consequence of RP entry into the kidney’s vascular system; segment 2 (secretory), subsequent less steep upturn for 3–5 min reflecting RP passage to kidney cavities via tubules; it finishes with the highest curve peak indicating the maximum drug accumulation period (Tmax); after that technemek is gradually excreted to the urinary bladder; hence, segment 3 (excretory) is represented by a steep curve downturn due to RP excretion from the kidney. Excretory segment’s duration is calculated on the basis of the drug’s half-life – T1/2 (normally, up to 12–15 min). The following pathological types of renograms are distinguished depending on the form of renal pathology: obstructive (urinary tract obstruction), parenchymatous (decelerated secretory and excretory renal function in the event of chronic pyelonephritis, hydronephrosis, etc.), isosthenuric (acute secretory and excretory renal malfunction in the event of glomerulonephritis and arteriosclerotic kidney), and afunctional (in the absence of secretory-excretory renal function) (Fig. 18.3).

(a) Patient S., 14 years of age. Nephroscintigraphy. “Interest zones” in the area of renal parenchyma and pelves, as well as of the urinary bladder. Renogram changes: normal cortical transport, moderately decelerated excretion from the left pelvis, reflux. (b) Patient O., 15 years of age. Nephroscintigraphy. Extremely acute depression of the right kidney’s function, urodynamic disorders, and CRF
Examination of children with vesicoureteral reflux (VUR) of different severity detected unilateral and bilateral lesions in 52.6 % and 47.3 % of the cases, respectively. Static nephroscintigraphy helped to detect kidney injuries of different severity in all the examined patients with VUR. A twofold decrease in the affected kidney’s functioning parenchyma amount was observed in patients with stage III VUR or worse. The established regularities indicate that the primary factors of the functional condition of kidneys include not only the reflux grade, but also the nephrosclerosis type or the combination thereof, especially in the event of bilateral VUR in children characterized by significant impairment of the structural-functional condition of kidneys. Nephroscintigraphy also helps to adequately assess reserves of the functionally active renal parenchyma in children with VUR (Fig. 18.4).

Patient R., 6 years of age. Dynamic nephroscintigraphy 6 months after operative correction of bilateral megaloureter: front view (left), back view (right). Right kidney’s volume (43 cm3) is lower than normal (75 cm3). Right kidney’s clearance recovery
Radionuclide examinations of 2–16-year-old patients with hydronephrosis of different severity showed that the primary factors of the kidney’s functional malfunction include not only the obstruction severity and nephrosclerosis grade, but also the residual functioning tissue amount (FTA) of kidneys, which is quantitatively measured in the process of nephroscintigraphy; this helps to assess functional reserves of the renal parenchyma in such patients and prognosticate the disease course (Fig. 18.5). 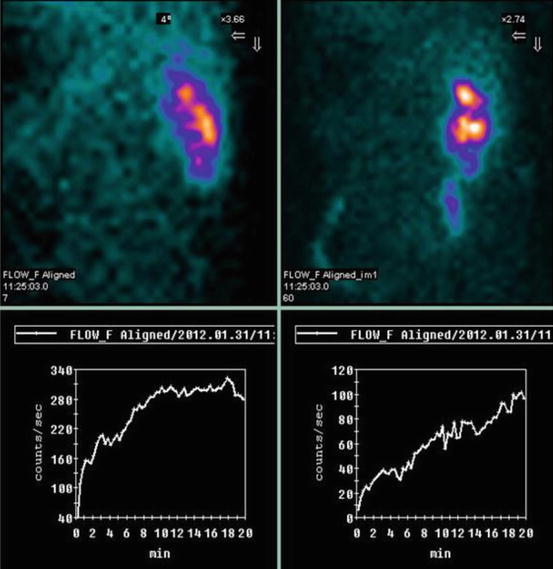 Radionuclide hepatography using 99mTc technephyte (37–150 MBq) is an organ-specific method of examining absorption-excretory function of hepatocytes and biliary tract patency. Dynamic 1–1.5-h-long examination of liver helps to detect the slightest deviations in the hepatocyte function, specify the type of jaundice, distinguish between active and non-active forms of hepatitis, and determine prognosis of the disease (Figs. 18.6, 18.7, and 18.8). 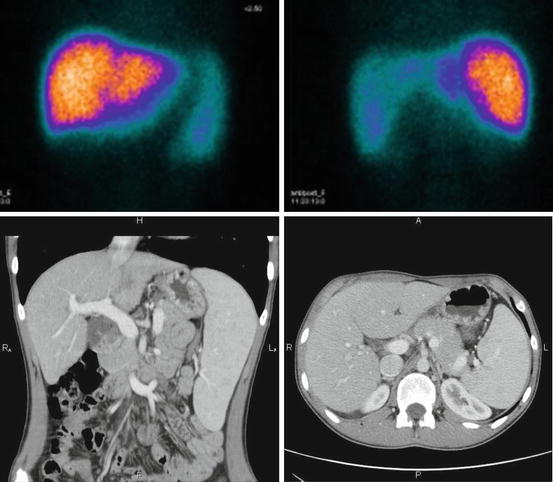