Osteosarcomas are malignant osteoid-producing sarcomas (Table 8.1). Although they are the most common of the primary bone sarcomas, there are fewer than 1,000 new cases per year in the United States. Eighty-five percent of cases occur at 30 years of age or younger, but osteosarcomas may occur at any age. Most arise de novo, but in patients older than 40 years of age, as many as 15% to 20% of osteosarcomas are associated with Paget disease, therapeutic irradiation, or bone infarct. 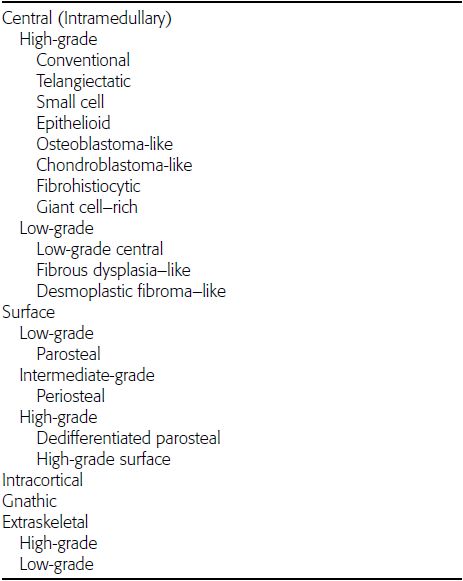 Conventional (intramedullary) osteosarcoma is found within the cancellous portion of a long or flat bone. Aggressive growth within the medullary cavity leads to early cortical penetration and invasion of the soft tissues. The typical longitudinal location is the metaphysis; the typical transverse location is eccentric within the medullary cavity. An open growth plate can act as a barrier to tumor spread, sparing the epiphysis in the immature skeleton. The common locations are the distal femur (32% of cases), proximal tibia (15%), proximal femur and femoral shaft (9%), proximal humerus (8%), and ilium (7%). Note that nearly 50% of osteosarcomas occur around the knee.

The typical clinical presentation is nonspecific: pain, swelling, and limited joint motion for a few weeks or months. Some patients present with pathologic fractures, especially those with rapidly growing, sparsely ossified tumors. An osteosarcoma may be overlooked in the presence of a healing pathologic fracture, but appreciation of the presence of bone destruction leads to the correct diagnosis. Fracture callus and osteosarcoma can be virtually indistinguishable histologically.

Most osteosarcomas are heavily or moderately ossified, with the dense blastic areas corresponding to mineralized osseous matrix made by the tumor and reactive medullary bone (Figs. 8.1 and 8.2). Lytic areas, when present, correspond to the destruction and replacement of the bone by tumor tissue containing scant or no ossification. Cortical penetration with a large soft-tissue mass is common (see Fig. 7.6). Confluent bone densities within a soft-tissue mass correspond to mineralized matrix. Reactive periosteal new bone may have a linear, laminated, or perpendicular sunburst bone configuration, all of which are indicative of cortical penetration. Approximately 50% of osteosarcomas have features typical enough to allow a confident radiologic diagnosis. Approximately 25% of osteosarcomas are chondroblastic, with large amounts of chondroid matrix mixed with the osteoid, so that the appearance on imaging may resemble a chondroid or myxoid lesion. Approximately 25% of osteosarcomas are fibroblastic, with large amounts of fibrous matrix. Recurrent tumors resemble the primary. Any cloudlike, solid, dense bone formation within the medullary cavity, even in the absence of overt bone destruction and soft-tissue extension, should suggest the possibility of an osteosarcoma.

Osteosarcoma metastasizes to the lung, where the deposits may form dense, mineralized osteoid, accumulate bone-scanning agents, cavitate, and cause pneumothorax. At presentation, 10% to 20% of patients have metastases, usually to the lungs. Occasionally, skip metastases occur in the medullary cavity of the host bone, sparing an interval of normal marrow between the primary tumor and the metastasis (Fig. 8.3). A metastasis may even skip across a joint.

Osteosarcomas are rapidly growing tumors with a median doubling time of 34 days. Local recurrences are usually apparent within the first year. The current treatment consists of neoadjuvant chemotherapy to reduce the tumor mass, aggressive resection of the tumor, adjuvant chemotherapy, and resection of pulmonary metastases. Segmental limb-sparing resections may improve function without necessarily compromising local control. The disease-free, overall 5-year survival rate of those without metastatic disease at presentation (up to stage II-B) approaches 80%.

FIGURE 8.4. Radiation induced osteosarcoma of the scapula. A: AP radiograph shows radiation change in the clavicle and scapula, with a coarsened trabecular bone pattern. The humerus overlies a destructive lesion of the scapular spine. B: Axial T2-weighted fat-suppressed MRI shows heterogeneous high signal in a large scapular mass with soft-tissue extension (arrow).

Parosteal osteosarcomas represent 6% to 9% of osteosarcomas. This variety arises on the cortical surface and affects a slightly older age group, with most patients older than 20 years of age. Virtually all are found in the metaphysis of a long bone, especially the posterior surface of the distal femoral metaphysis (66% of cases). The presentation is nonspecific, often dull, aching pain or mechanical difficulties caused by the mass itself. The lesions are commonly diagnosed and treated incorrectly for years as atypical osteochondromas that somehow recur locally. Even with late diagnosis, the prognosis is often better than for conventional osteosarcoma. The radiographic appearance is a lobulated juxtacortical mass with densely ossified tumor tissue attached to the cortex, often by a stalk; variable amounts of lucent, nonossified tissue are usually present, making the lesion larger than apparent on plain radiographs (Fig. 8.6). CT or MRI can document tumor invasion of the medullary cavity by direct extension through the stalk.

Chondrosarcomas are malignant cartilage-producing tumors that arise de novo or in preexisting cartilage lesions or rests. They present a wide variation in form and aggressiveness, and low-grade malignant lesions may be almost indistinguishable morphologically from benign cartilage-containing lesions. A limited focus of malignancy may be embedded in a much larger mass of clearly benign tissue. At the other end of this spectrum are high-grade, frankly malignant tumors that recur and spread by local extension or metastasis. Chondrosarcomas follow a slow clinical evolution; they tend to metastasize late in the clinical course, and patients rarely present with metastatic disease.

Medullary (central) chondrosarcomas are primary lesions that arise within the cancellous bone or the medullary cavity. The most common locations are the pelvis (23% of cases), femur (22%), ribs (11%), and humerus (11%). The presenting symptom is deep pain lasting for months or years. If the tumor has breached the cortex, local swelling may be present. Presentation is over a wide age range, but most patients are between 35 and 70 years of age, and men are affected more frequently than women. The treatment is surgical. The incidence of metastasis and the prognosis are related to the histologic grade, with 10-year survival ranging from 28% for high-grade lesions to 85% for low-grade lesions. The radiographic appearance is osseous destruction with matrix mineralization characteristic of cartilage. A typical lesion would be a lucent area in the center of a long bone with endosteal scalloping, cortical thickening, and geographic margins. Often, the tumor contains punctate or flocculent calcification and ring-shaped ossification characteristic of cartilage tissue (Figs. 8.8–8.10). The lucent appearance is a result of the replacement of normal bone by noncalcified cartilage. On CT, the nonmineralized regions have a myxoid appearance with attenuation in the range of 10 to 30 Hounsfield units (HU). On MRI, these regions have high signal on T2-weighted images and variable signal on TI-weighted images. A lobular growth pattern is often evident on CT or MRI. Bone scan shows increased tracer accumulation.

Exostotic (peripheral) chondrosarcomas arise in the cartilage cap of a previously benign exostosis (osteochondroma) or from the surface of a bone involved by multiple heritable exostoses. They represent approximately 15% of chondrosarcomas. Men are affected twice as often as women. A wide age range is affected, but most patients are young adults. The tumors tend to be of low histologic grade and may be difficult to distinguish from the cartilaginous cap, but a nonmineralized soft-tissue component larger than 1cm should raise suspicion. If a lesion recurs, it tends to be of a higher histologic grade. The radiographic appearance is that of an exostosis with an attached mass of soft-tissue density containing variable amounts of cartilaginous calcification (Fig. 8.11). CT and MRI reliably demonstrate nonmineralized cartilaginous matrix. Serial films may document destruction of ossified portions of the underlying exostosis. These lesions appear as areas of increased tracer uptake on bone scan, with the intensity of radionuclide accumulation roughly proportional to the combined amount of enchondral ossification, osteoblastic activity, and hyperemia in the tumor. The intensity of uptake does not reliably predict whether the lesion is benign or malignant.