Neoplasms, Neoplasm-like Lesions, and Infections of the Skull

Neoplasms, Neoplasm-like Lesions, and Infections of the Skull

Primary neoplasms of the skull are rare. The most commonly encountered lesions in children with a solitary nontraumatic lump on the head are dermoid tumors of the scalp (61%), cephalhematoma deformans (9%), Langerhans cell histiocytosis (LCH) (7%), and occult meningoceles and encephaloceles (4%).1,2

Osteochondromas may arise from the cartilaginous bones of the skull base. Osteoblastomas have been reported in the calvaria of infants, and aneurysmal bone cysts have been noted in the skull base and the calvaria (Fig. 21-1). Osteomas are small and usually limited to the outer table, although osteoid osteomas may occur in the diploë. Osteoid osteomas may present with the appearance of a button sequestrum. Malignant bone tumors are unusual, but osteogenic sarcoma and Ewing sarcoma have been reported (e-Fig. 21-2).3–5 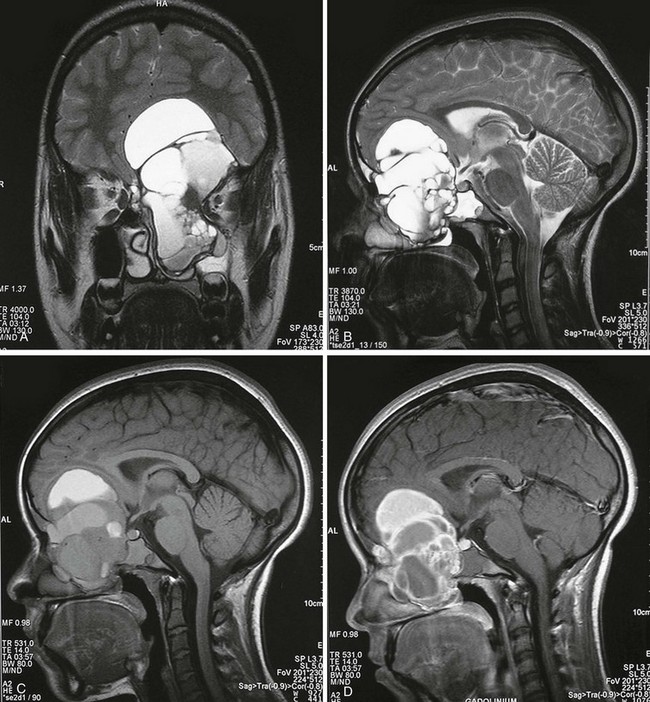 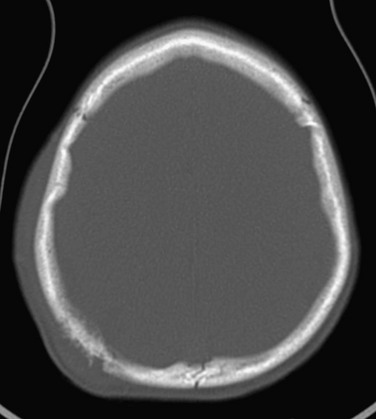 e-Figure 21-2 An osteogenic sarcoma of the skull.
An axial computed tomography scan with a bone window reveals a right occipital soft tissue mass with bony permeation and spiculation from tumor new bone formation. 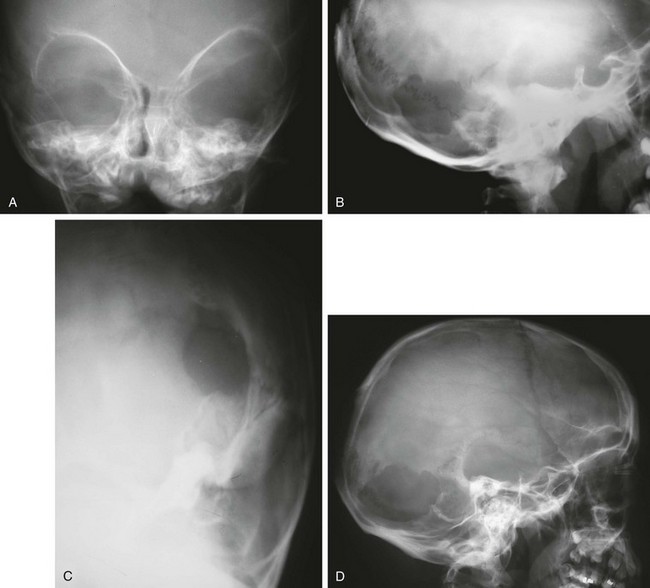 Figure 21-3 Skull changes of neurofibromatosis (NF) type 1.
A, A frontal view of the orbits reveals an elevated sphenoid wing (bilateral) and hypoplasia of the left sphenoid bone. B and C, A 5-year-old boy with NF has a defect in the left lambdoid suture seen on lateral (B) and oblique (C) views. D, A lateral view of another child with NF who has a large skull defect seen in the left lambdoid suture. (Courtesy Peter Strouse, MD, Ann Arbor, MI.)

Cavernous hemangiomas of the skull are characterized by rounded areas of diminished density in which there may be a honeycomb or radial pattern of greater density caused by spiculation. Calvarial hemangiomas (e-Fig. 21-4) usually thicken the outer table externally and are radially striated. They do not displace the inner table. 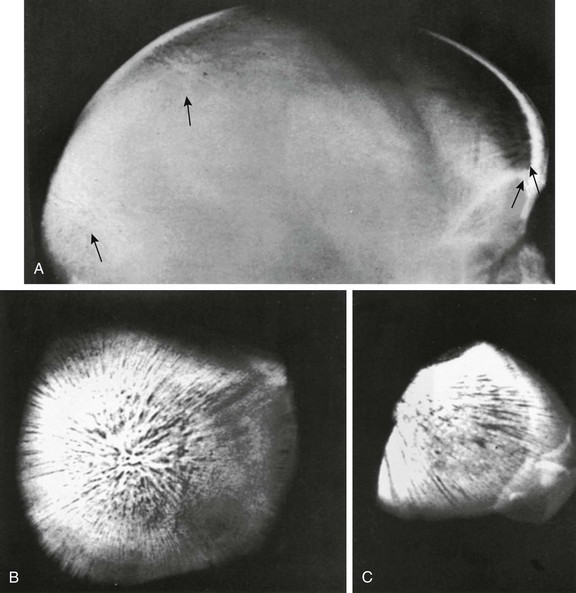 e-Figure 21-4 Radially striated hemangiomas (arrows) in the frontal and occipital squamosae and in both parietal bones of a child who also had hemangiomas of the neck, shoulder, and upper portion of the thorax.
A, A lateral radiograph of the head. B and C, Necropsy specimens from the occipital squamosa. (Courtesy Marie Capitanio, MD.)

Lymphatic malformations of the skull are rare and may produce radiologic changes resembling cephalhematoma deformans.

Epidermoids are ectodermal rests or inclusions that may be located in the scalp, in the diploic spaces, or between the internal surface of the inner table and the dura. Epidermoids are usually benign and grow slowly. If they protrude into the cranial cavity, they may be the source of cerebral symptoms. When epidermoids grow within the bone or impinge on it, they produce local destruction of bone that appears radiographically as a sharply demarcated lucency surrounded by a smooth sclerotic margin (Fig. 21-5), which sometimes may be scalloped. The margin is due to flaring of the edge of the bone into a marginal ridge. Most cases are found in children younger than 3 years.8 The lesions usually disappear within a few years of discovery. 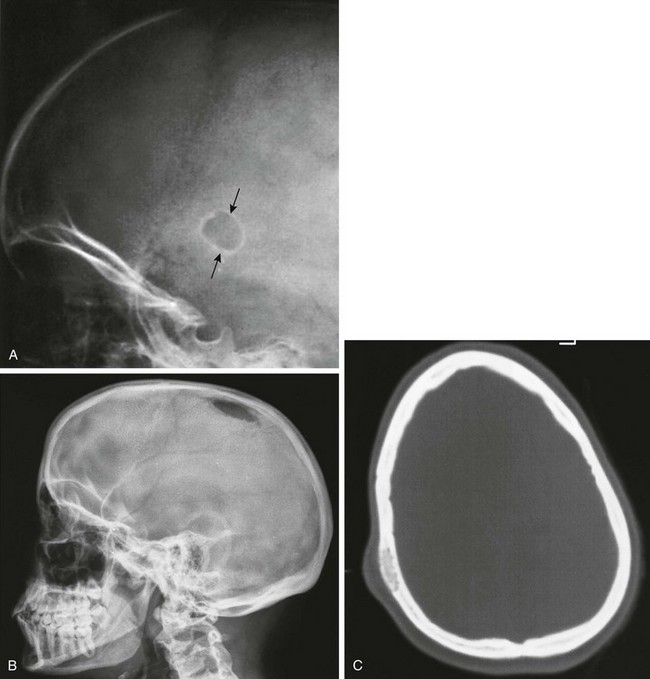 Figure 21-5 An epidermoid in a 1-year-old infant.
A, Arrows point to a small oval defect in the parietal bone with a sharply defined sclerotic border. B and C, An epidermoid in another child shows that these lesions may not be as well demarcated by sclerotic edges (B). A computed tomography scan reveals the lesion and soft tissue swelling (C).

Meningiomas are rare in children. Radiographic changes include hyperostosis, an increase in the caliber and number of grooves for regional blood vessels, and calcifications in the meningioma itself. The hyperostosis is composed of normal reactive bone and is a complication rather than a part of the neoplasm. Occasionally, the overlying bone is destroyed, giving rise to radiolucent patches. Rarely, interosseous meningiomas occur (e-Fig. 21-6). Multiple meningiomas sometimes occur, most commonly in association with NF. Calvarial lesions, similar to the defects in NF, can occur in persons with congenital generalized fibromatosis.9 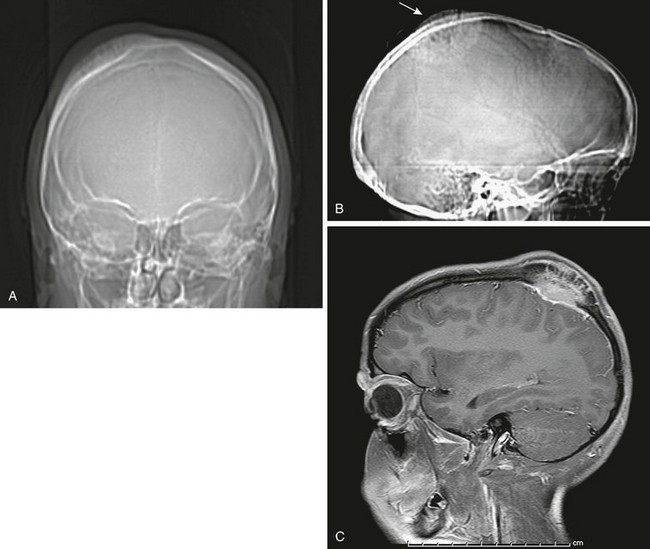 Chordomas are infrequent in children; they occur predominantly in the clivus with clinical signs of diplopia, palatal or tongue weakness, and headaches.10,11 Torticollis occasionally is present. Magnetic resonance imaging (MRI) shows the location and extent of the chordoma. The tumor is inhomogeneous on T1-weighted and T2-weighted images and shows septations (Fig. 21-7).

Figure 21-7 A chordoma.
A, A computed tomography scout image reveals the absence of the clivus. B, A contrast-enhanced magnetic resonance image shows the huge enhancing chordoma, which is involving the clivus and sphenoid, pushing on the brainstem.

Melanotic neuroectodermal tumor of infancy (melanotic progonoma, retinal anlage) is a rare tumor of the skull. The tumor is believed to be of neuroectodermal origin.12–15 More than 90% of cases involve the head and neck region; 70% occur in the maxilla, and about 13% occur in the calvarium, where the tumor has a predilection for the region of the anterior fontanelle. About 6% of cases occur in the mandible. In the calvarium, the tumor usually begins during the first year of life as a movable scalp nodule that subsequently invades the bone, becomes fixed to it (often adhering to the dura), and grows very rapidly. The bone is destroyed, but reactive spicules develop internally and externally, producing a sunburst appearance tangential to the mass on films (e-Fig. 21-8). Occasionally the mass appears as a soft tissue density. Local recurrences may occur after surgical removal. Although malignancy has been noted in extracalvarial tumors, it has not been reported for tumors in the calvarium. 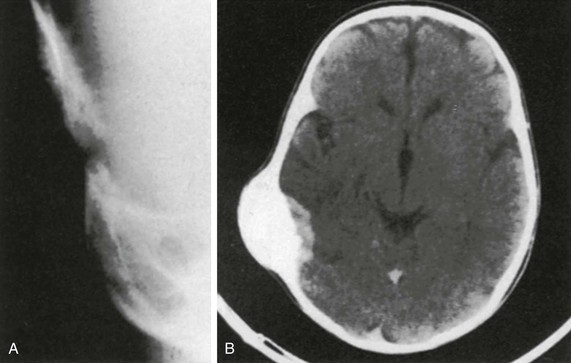 e-Figure 21-8 A melanotic neuroectodermal tumor of infancy.
A, Tangential projection of the posterolateral fontanelle shows the typical bone reaction and speculation. B, A nonenhanced computed tomography scan shows the internal expansion of the tumor and the massive bone reaction. (From Jones HH, Parker BR, Ballerio CG, et al. Case report 617: melanotic neuroectodermal tumor of infancy in the calvaria. Skeletal Radiol. 1990;19:317-318.)

“Doughnut lesions” are rounded or oval radiolucent calvarial defects with a surrounding sclerotic halo, central bone density, or both.16 Multiple radiographic “doughnut lesions” have been described.17 Microscopic features in the calvarial lesions included fibrous tissue with clusters of foam cells or histiocytes and surrounding sclerotic bone. Familial doughnut lesions (Fig. 21-9) of the skull have been reported, and similar radiographic changes have been found in persons with sickle cell anemia. A malignant calvarial doughnut lesion caused by a metastatic carcinoma has been reported with features of a button sequestrum.18 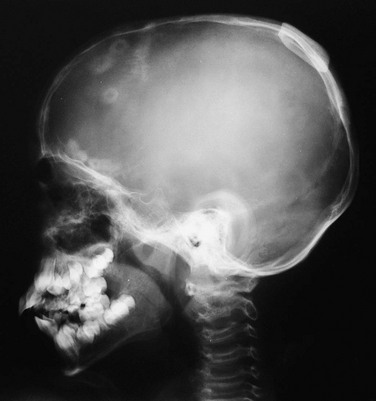 Figure 21-9 A calvarial doughnut lesion in a well child.

Secondary tumors of the calvarium are more common than primary tumors and include leukemia, neuroblastoma, small round cell tumors, and histiocytosis (Figs. 21-10 through 21-12 and e-Fig. 21-13). The differential diagnosis of a permeative pattern includes osteomyelitis. 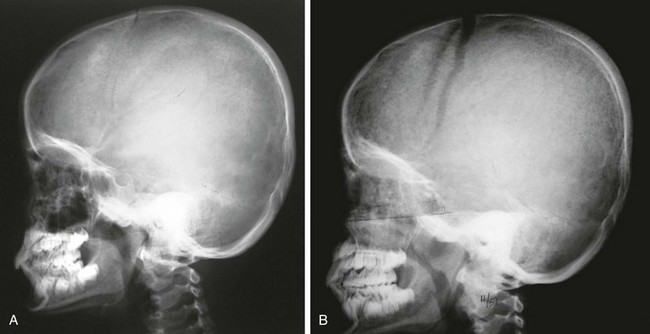