Development and Anatomy of the Sinonasal Cavities 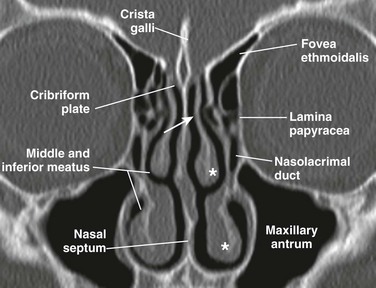 Figure 8-1 Anatomy of the nasal cavity demonstrated in a 13-year-old child.
A coronal computed tomography scan shows middle and inferior turbinates (asterisks) and vertical lamella of the middle turbinate attached to the cribriform plate (arrow).

The paranasal sinuses form as diverticula from the walls of the nasal cavities and become air-filled extensions in the adjacent bones—maxilla, ethmoid, frontal, and sphenoid. The original openings of the diverticula persist as the ostia of the sinuses that communicate with the nasal cavity (Fig. 8-2, A and B).

The mucosal lining of the nasal cavities is contiguous with the paranasal sinuses and consists of pseudostratified, columnar, ciliated epithelium containing mucinous and serous glands,1 whereas the nasal septum is lined by squamous mucosa.2 In the human embryo, ethmoidal and maxillary sinus budding can be detected at 11 to 12 gestational weeks and at 14 to 15 gestational weeks, respectively.3 In general, only rudimentary maxillary and ethmoid sinuses, which continue to expand until puberty or early adulthood, are present at birth.4 The sinuses also are linked to facial growth and dentition and have been studied extensively by different anatomic and imaging methods (Fig. 8-3, A-C).4–11 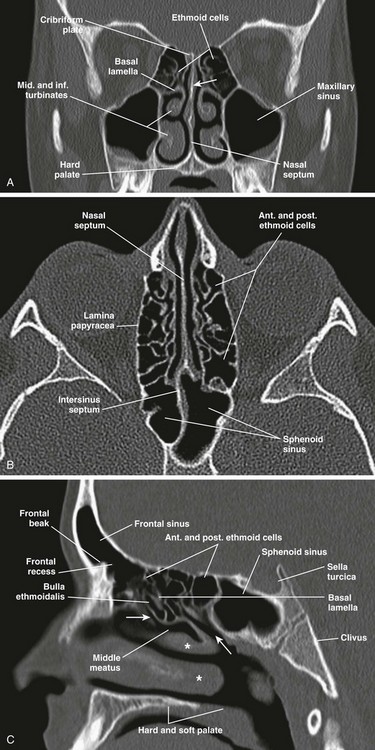 At birth the ethmoid sinuses are already developed in number and pneumatized, but they continue to expand, reaching adult proportions at about 12 years of age.12 The ethmoid sinuses consist of a paired group of a variable number of cells (3 to 18) within the lateral masses of the ethmoid bone, also known as labyrinths. In addition to the lateral masses, the ethmoid bone consists of the cribriform plate superiorly and the perpendicular plate, which is part of the nasal septum (see Fig. 8-3, A). The ethmoid sinus is bordered medially by the nasal cavity and laterally by the lamina papyracea; its roof is formed by the cribriform plate and fovea ethmoidalis (see Fig. 8-1). The anterior and posterior ethmoid air cells are separated by the basal lamella (see Fig. 8-3, C), which is the lateral attachment of the middle turbinate to the lamina papyracea. Drainage of the anterior ethmoid air cells occurs via the ethmoid bulla into the hiatus semilunaris and middle meatus. The posterior ethmoid air cells drain into the superior meatus and then into the sphenoethmoid recess (see Fig. 8-2, A).

The anterior ethmoidal artery arises from the ophthalmic artery in the orbit, pierces the lamina papyracea, and exits via its respective foramina by passing through the ethmoid roof in the superomedial wall of the orbit, 2 to 3 mm behind the anterior wall of the bulla ethmoidalis. Occasionally the anterior ethmoidal artery passes within bony septae of the ethmoid sinuses and is suspended in a mesentery without bony cover (e-Fig. 8-4).13 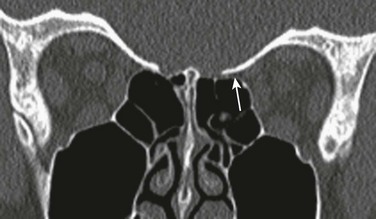 e-Figure 8-4 The normal bony canal for the anterior ethmoidal artery on the left side shown on a coronal computed tomography scan (arrow).

The roof of the anterior ethmoid sinus is formed by the cribriform bone medially and the fovea ethmoidalis laterally (see Fig. 8-1). Any asymmetry in the height of the ethmoid roof should be documented by the radiologist because a higher incidence of surgical penetration occurs during endoscopic surgery on the side where the position of the roof is lower.14,15 An increased risk of inadvertent intracranial penetration may occur if the fovea ethmoidalis plane passes through the midorbital plane or below.

Concha bullosa refers to the pneumatization of the middle turbinate as a result of intramural extension of posterior ethmoid air cells (Fig. 8-5, B). A large concha bullosa eventually can cause obstruction of the airway. 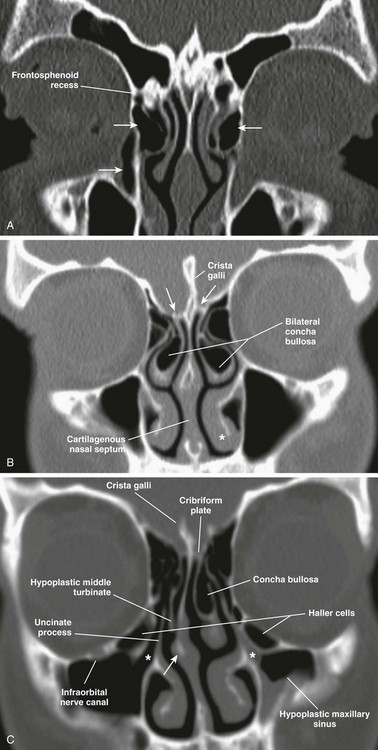 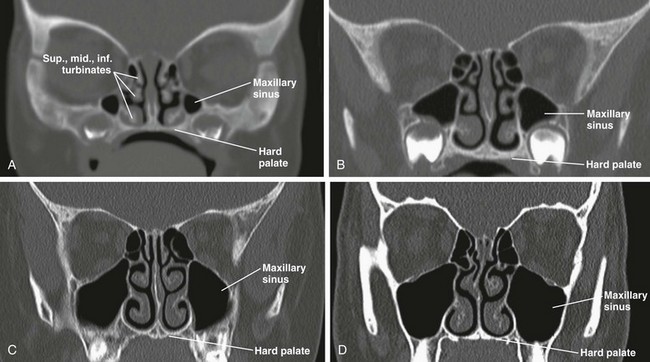 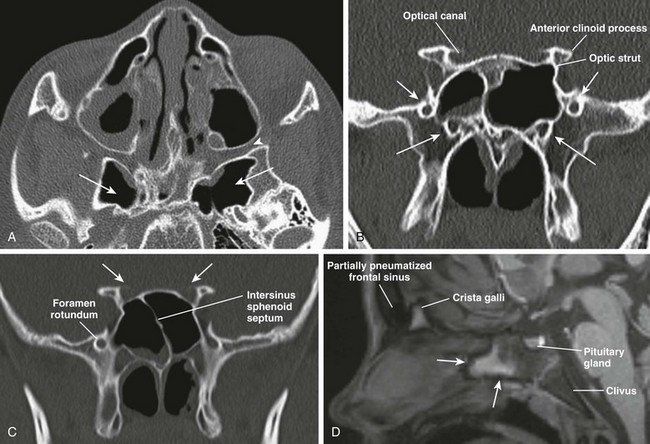 Developmental variations of the maxillary sinus include an accessory ostium, isolated unilateral hypoplasia, and prominent septa that appear to compartmentalize the sinus cavity. Occasionally the roots of the maxillary molars impinge on the walls of the sinuses.

The sphenoid sinus begins to pneumatize in a ventrodorsal direction from 7 months to 2 years of age. A significant acceleration in sinus expansion occurs between 3 and 8 years of age, with complete pneumatization usually present by age 10 years (e-Fig. 8-8, A–E).9 Its border is formed superiorly by the sella turcica, posteriorly by the clivus, anteriorly by the ethmoid sinus, and inferiorly by the nasopharynx (see Fig. 8-2, A and B). This sinus drains anteriorly via the sphenoethmoid recess. Lateral recesses of the sphenoid sinus are formed from pneumatization of the pterygoid process in 44% of people (see Fig. 8-7, A). Benign sphenoid marrow variants, which sometimes are mistaken for lesions, can be seen adjacent to the pneumatized sphenoid sinus (e-Fig. 8-9, A-C). 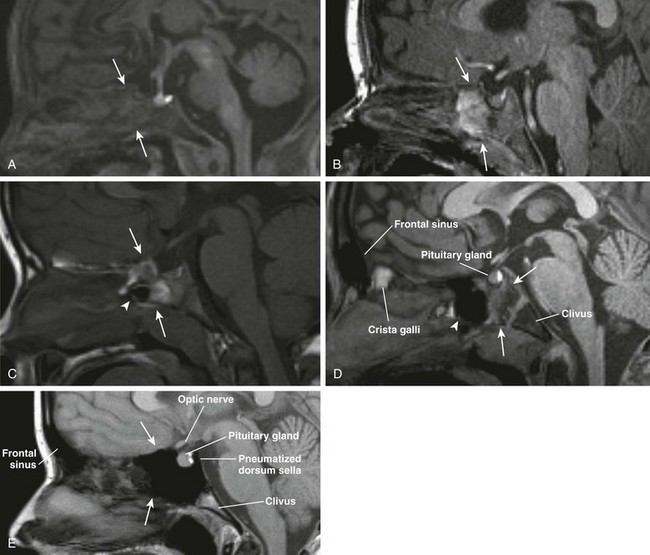 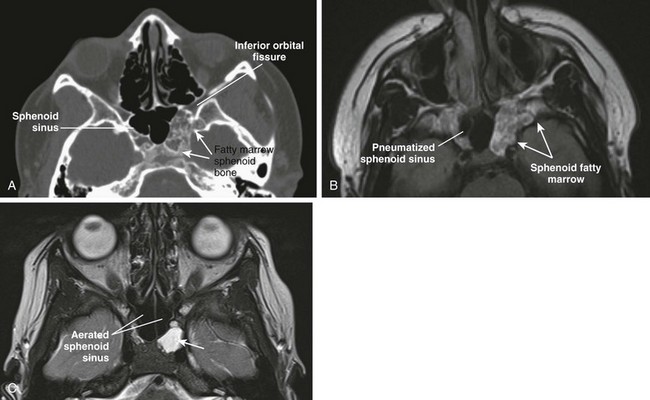 Imaging of the Paranasal Sinuses

Although plain radiography is less costly and more widely available than computed tomography (CT), it has significant limitations in evaluating the paranasal sinuses. Specifically, plain radiography often overestimates or underestimates findings, it does not localize pathology well, and it does not provide important anatomic detail.17 Traditionally, the paranasal sinus series has consisted of four views (Caldwell, Waters, posteroanterior, and lateral) that are technically difficult to perform in children. The Waters view is obtained by angulating the beam in 5-degree increments per year (up to age 6 years) to compensate for the progressive enlargement of the maxillary antra throughout childhood (Fig. 8-10, A and B). Although this approach improves visualization of the maxillary sinuses by projecting them over the petrous pyramids, it also creates double contours that can simulate mucosal thickening. Radiographic density also is critical because overpenetration of the films can completely obscure density differences created by disease, whereas underpenetration can simulate disease. Air fluid levels also can be obscured as a result of beam angulation. Although some have suggested using only the Waters view radiograph, this modality has been shown to have 32% false-negative results and 49.2% false-positive results when compared with CT. Moreover, most of the abnormalities in the ethmoid and sphenoid sinus are not detected in the Waters radiograph.18 Ethmoid disease on the Caldwell projection can be overdiagnosed or underdiagnosed because of technical and anatomic factors. The lateral view for evaluating the sphenoid sinus is of very little value in children younger than 4 years.17,19

The American College of Radiology does not recommend the use of plain radiography in diagnosing sinusitis in children. Sinusitis is considered a clinical diagnosis that should not be made on the basis of imaging findings alone.20 Similarly, American Academy of Pediatrics (AAP) guidelines state that plain radiographs are unnecessary for diagnosing sinonasal disease in children younger than 6 years.21 Further, plain films do not play a role in evaluating sinonasal masses or complications of sinusitis.

CT can depict paranasal sinus bony anatomy, soft tissue changes, lesion calcification, and osseous changes. Coronal CT images best demonstrate the anatomy of the ostiomeatal unit, as well as important anatomic landmarks and variants of the sinuses, effectively providing a road map for functional endoscopic sinus surgery. For these reasons, CT is considered the imaging modality of choice for evaluating inflammatory disease of the paranasal sinuses (i.e., recurrent and chronic sinusitis). CT also plays an important role in detecting orbital and intracranial complications of acute or chronic sinusitis. Along with magnetic resonance imaging (MRI), CT is an excellent tool for evaluating sinonasal masses.

When using nonhelical CT, images of the paranasal sinuses are obtained in a direct coronal plane with the patient in a prone position with the head hyperextended. Multidetector CT with volume isometric imaging allows axial image acquisition perpendicular to the table with the patient in a neutral supine position; images subsequently are reconstructed in coronal and sagittal planes. Slice thickness is usually 2.5 mm, and anatomic coverage extends from the upper teeth to 2 cm above the frontal sinus. If orbital or intracranial complications of sinusitis are suspected clinically, the study should be performed after the intravenous (IV) administration of contrast material, and imaging also should include the brain. Images are reconstructed in both soft tissue and bone algorithms.

In recent years, there has been heightened awareness of and concern about the potentially harmful side effects associated with radiation exposure, particularly in the pediatric population.22,23 For this reason, the practice of the “as low as is reasonably achievable” principle among the radiologic community is critical, with special attention given to CT protocols and parameters.22,24 In evaluating paranasal sinuses, it is possible to reduce radiation techniques for maxillofacial CT imaging, even to a level comparable to that used for standard radiographic images, without sacrificing diagnostic image quality.25

The role of sinus MRI in imaging inflammatory disease is limited, but it is valuable in evaluating complications of sinusitis (e.g., intracranial extension), as well as inflammatory disease associated with sinus or parasinal neoplasm. However, MRI does not depict bony detail and is less sensitive for bony erosions. Other limitations include its availability, higher costs, and the frequent need for sedation in young children.

The normal nasal cycle of vasodilation and mucosal edema followed by vasoconstriction and mucosal shrinkage can produce signal changes that can create significant variability in findings and thus differing interpretations. This cycle varies from 50 minutes to 6 hours, and the signal intensity during the edematous phase is indistinguishable from that of inflammatory change. As with CT and plain radiographs, sinus MRI typically shows a high incidence of findings in asymptomatic persons (13% to 37%) and mucosal thickening of <3 mm that is likely insignificant.2 MRI can differentiate mucosal thickening from sinus secretions (Fig. 8-11, A–E). 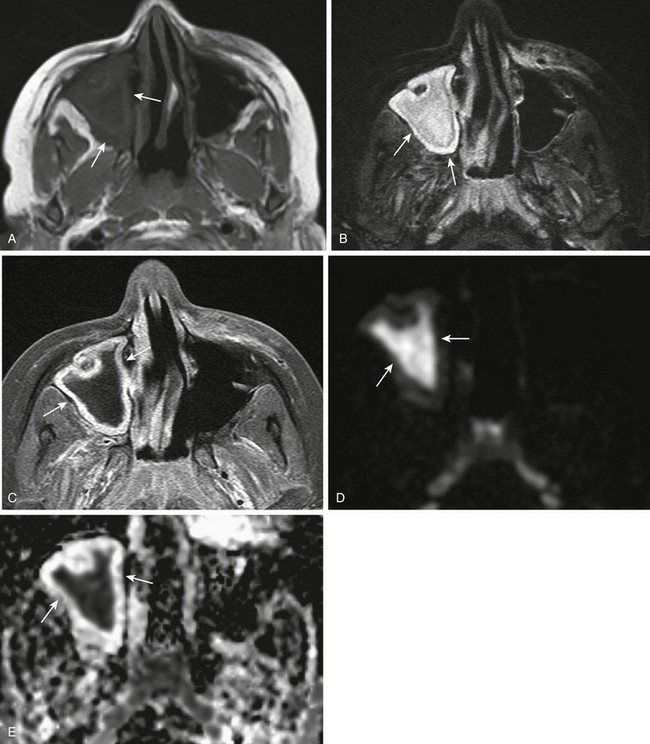 Along with CT, MRI is very useful in evaluating neoplasms. An estimated 90% to 95% of tumors in the sinuses or nasal cavity exhibit moderately lower signal intensities on T2-weighted images (from hypercellularity) compared with most acute inflammatory diseases (including polyps, mucoceles, and retention cysts), which produce a bright signal on T2-weighted images. However, more mature granulation tissue and fibrosis also have a lower T2 signal, making it difficult to distinguish from tumor. Certain fungal infections, in contrast to other types of acute inflammatory disease, also have a lower T2 signal.

Imaging Anatomy of the Sinonasal Cavities

Regarded as an important anatomic region for potential surgical intervention, the ostiomeatal unit is a complex anatomic structure at the crossroads of mucociliary drainage from the frontal, anterior ethmoid, and maxillary sinuses.26 It includes the uncinate process, infundibulum, ethmoid bulla, hiatus semilunaris, and middle meatus (Fig. 8-12, A and B).13

Congenital Lesions of the Nose

Choanal atresia, the most common congenital abnormality of the nasal cavity, is thought to result from failure of rupture of the oronasal membrane during the sixth week of fetal life. It consists of obstruction of the posterior opening of the nasal cavity, which is mixed bony-membranous in approximately 70% of cases and pure bony atresia in 30% of cases. The existence of a purely membranous atresia has been questioned, and evaluation with high-resolution CT often has failed to demonstrate a membranous atresia without a bony component.28 Choanal atresia can be unilateral (in 50% to 60% of cases) or bilateral, and it is more common in girls (the female : male ratio is 2 : 1).

Clinical Presentation: Bilateral choanal atresia presents with severe immediate onset of respiratory distress in the newborn, because infants are obligate nasal breathers. Symptoms are aggravated by feeding and relieved by crying. The inability to pass a nasogastric tube in a neonate with well-aerated lungs suggests the diagnosis. Unilateral choanal atresia usually is diagnosed later in childhood and presents with unilateral purulent rhinorrhea.

Imaging: Noncontrast CT is the imaging modality of choice. Nasal secretions should be suctioned before imaging is performed; administration of a nasal topical vasoconstrictor spray helps in reducing mucosal thickening. High-resolution imaging in bone algorithm will aid in delineating the bone margins. Findings consist of narrowing of the posterior choana (<0.34 cm in children <2 years of age) and enlargement and thickening of the vomer (>0.23 cm), which sometimes is fused to the maxilla.29 Medial bowing and thickening of the posterior aspect of the lateral wall of the nasal cavity also is seen. The nasal cavity often is filled with air, soft tissue, and fluid (Fig. 8-13, A and B). CT will identify other causes of bilateral nasal obstruction such as pyriform aperture stenosis and bilateral nasolacrimal duct cysts. Bilateral choanal atresia can be associated with other congenital abnormalities in 75% of cases, such as in persons with CHARGE syndrome.