Most BRCA-related ovarian cancers (60–100 %) are HGSCs. Mutations of BRCA1 and BRCA 2 are found in 40–50 % of sporadic HGSCs.
They are genetically unstable. These features confer a high aggressiveness and high cellular proliferation.
In contrast to HGSC, LGSC EOCs rarely contain p53 mutations but they are characterized by KRAS, BRAF, and HER-2 mutations (Table 1) and they are much more genetically stable. There is evidence that LGSC EOCs develop in a stepwise fashion from a benign epithelium from ovarian or tubal origin to borderline tumor, ending in an invasive cancer [4].

Mucinous carcinomas account for less than 5 % of all EOCs.
The most frequent mutations are KRAS and HER-2 (Table 1).
Current evidence support that these cancers develop also in a stepwise fashion from a benign epithelium to a borderline lesion, leading to an invasive carcinoma [4].
The origin of mucinous carcinomas is rather intriguing, because unlike serous, endometrioid, and clear cell carcinomas, they do not show a müllerian phenotype. It seems that mucinous tumors could have the same histogenesis than transitional cell tumors, arising from microscopic transitional cell nets at the tuboperitoneal junction [4].
Histologically, there are two variants: intestinal type and endocervical type, the former being the most frequent one.

Current knowledge about EOC carcinogenesis and pathogenesis highlights the heterogeneity of this disease.
From the clinical point of view, there are some differences in clinical presentation of EOC depending on the hystotype.

Mean patient age at diagnosis is 55.5 years old, or even earlier in BRCA-related carcinomas [6].
Up to 85 % of these patients present intra-abdominal spread of the disease at diagnosis. Extra-abdominal disease at presentation, such as liver, lung, or brain metastases, is not common at diagnosis (2–3 %). For this reason symptoms related to intra-abdominal spread such as abdominal swelling, bloating, constipation, or dyspepsia are common in these women.
Some studies have shown that the most of these women referred symptoms suggestive for EOC several months before diagnosis [7]. Thus, paying attention to those symptoms could lead to an earlier diagnosis or the so-called minimal volume disease diagnosis [8].

Mean patient age at diagnosis is 62.6 year old, being younger (40 year) in borderline serous tumors [6].
Most of these tumors present at early stage although a small proportion could present with intraperitoneal or visceral metastases.
These tumors generally are slow growing and do have an indolent course, so a significant proportion of women are asymptomatic at diagnosis.

These tumors usually appear in the fifth and sixth decades of life [6].
Association with endometriosis is frequent and past history of complaints related to endometriosis such as pelvic pain and infertility is common.
About 30 % of these tumors are diagnosed at stage I.

Patient’s mean age at presentation is 57 years old [6]. Association with endometriosis is also common.
These tumors generally manifest as large unilateral adnexal masses with nonspecific symptoms.
About 50 % of these carcinomas are diagnosed at stage I.

In spite of the significant amount of published studies addressing the role of ultrasound for predicting ovarian malignancy in adnexal or pelvic tumors, there is a paucity of studies describing the specific features of epithelial ovarian cancers [9–14].

It could be considered that the “typical” sonographic features of HGSC are the presence of cystic–solid or solid irregular adnexal masses [6] (Figs. 1 and 2). Bilaterally it is frequently found out (60–84 %). 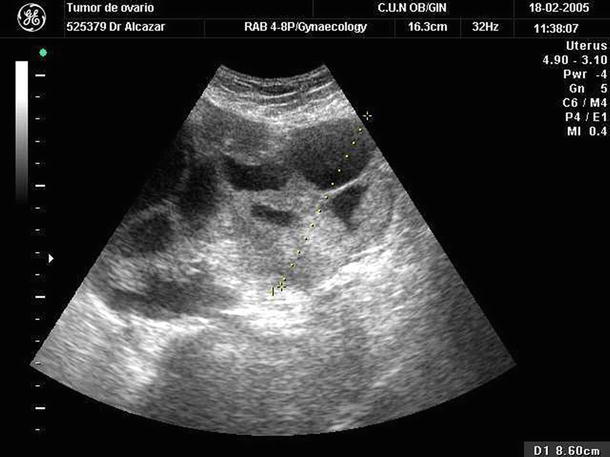 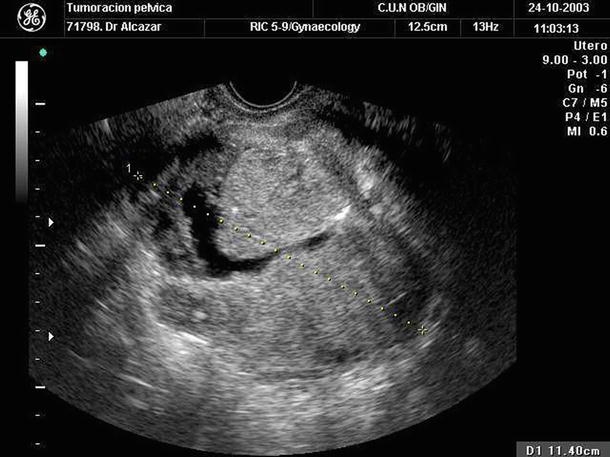 Transvaginal sonogram of an HGSC showed as an irregular solid adnexal mass
The content of the cystic portion generally is anechoic.
The presence of ascites (Fig. 3) and abdominal metastases is also a common finding in most of the cases (Figs. 4 and 5). 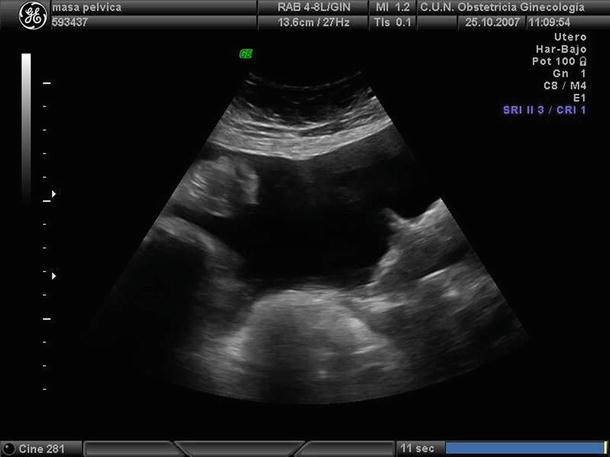 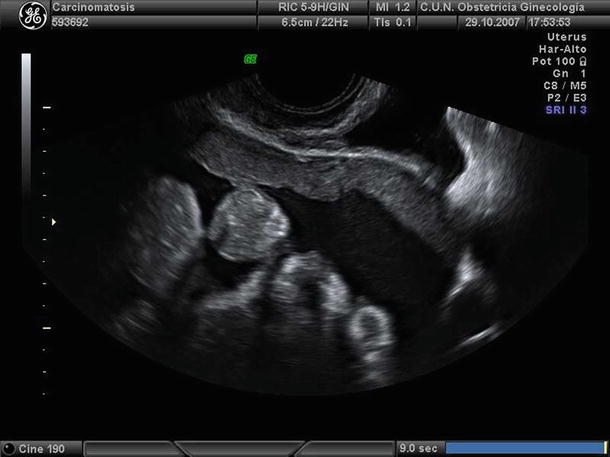 Transvaginal ultrasound showing carcinomatosis involving the peritoneum of the bladder 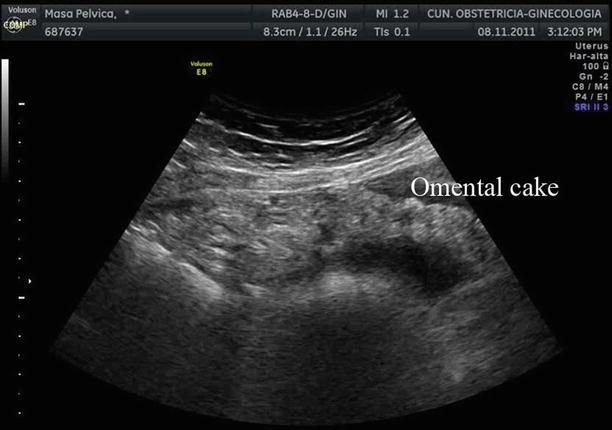