and MR Imaging of Malignant Germinal and Stromal Ovarian Tumours

Immature teratoma. A 16-year-old girl. CT with iodium injection (a) and coronal reconstruction (b). A right pelvic mass was detected on abdominal pain on ultrasound and CT. A right heterogeneous multicystic mass is seen on the right side of the pelvis, with uterus displacement. Calcifications are seen in the mass (arrow) and may suggest the diagnosis of immature teratoma 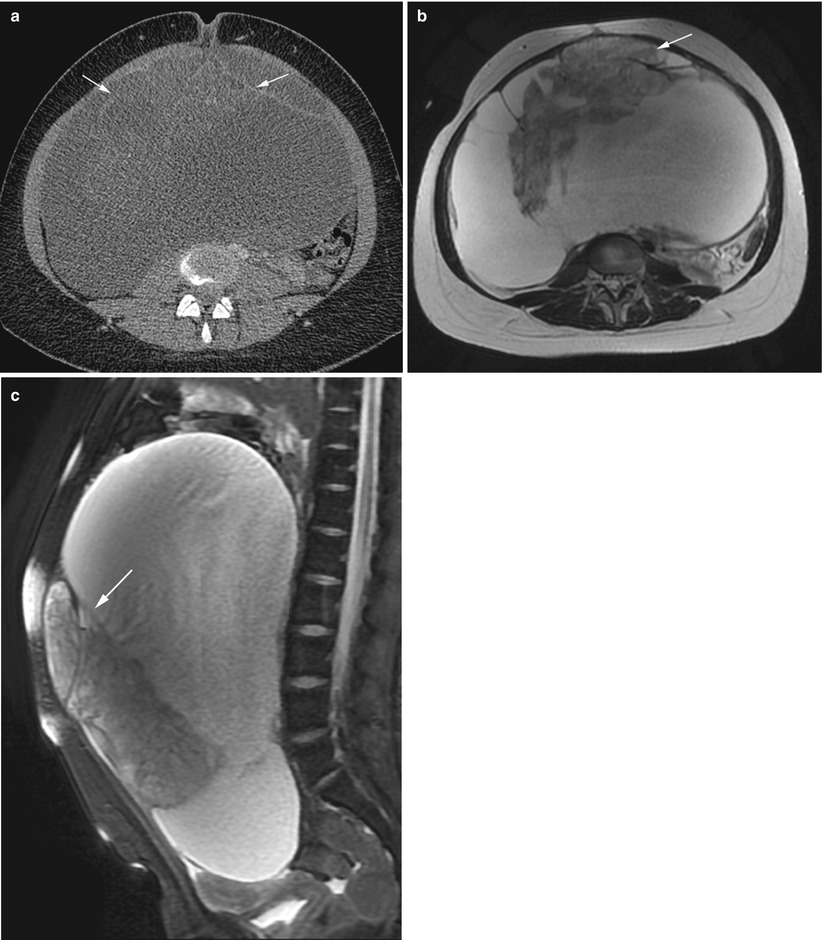 Immature teratoma. A 24-year-old woman. CT with iodium injection (a), MRI (axial T2w, b) and sagittal T2w with fat suppression (c) 18 cm abdominal and pelvic mass discovered on abdominal pain and distension of the abdomen. CT shows a cystic mass with heterogeneous loculated thick wall (arrows, a). MRI depicts more clearly a heterogeneous solid content within the cystic mass (arrows) in the anterior part of the mass. In this immature teratoma, no fatty tissue or calcifications were seen on imaging or pathology

Histologic findings are usually completely different, and mature teratomas usually transform in squamous cell carcinomas (80–85 %) rising from the squamous cell lining of the wall cyst; the rest are carcinoid tumours or adenocarcinomas [6]. These tumours have a large size (>10 cm) and display high concentrations of squamous cell carcinoma antigen and CA-125 that are considered as markers for malignant transformation [6].
The gross appearance of malignant transformation of mature teratoma is similar to benign mature cystic teratomas with a more solid component [3]. Imaging must focus on Rokitansky nodule which is along with the cyst wall and the common site for degeneration. It has the appearance of the underlying mature teratoma. CT and MR findings consist of a fat-containing tumour with an enhancing, irregularly marginated, solid component with or without direct invasion of close organs [1]. Enhanced CT scan shows a single plug with cauliflower appearance and an irregular border forming an obtuse angle with the inner wall of the cyst [7]. Moreover, mature teratomas have a smooth surface, whereas transformed mature teratomas may have septa and a capsule [3]. Besides, mature teratomas never show a transmural growth and contrast enhancement after injection [3]. In fact, it has been suggested that the contrast enhancement of the Rokitansky nodule is an early indicator of malignant transformation [8]. This difficult identification is important because changes of a mature teratoma usually display a bad prognosis.

Growing teratoma syndrome (GTS) is defined as enlarging masses of mature teratoma following chemotherapy for malignant nonseminomatous germ cell tumours [9]. Tumour masses in GTS grow at the initial site of tumour with extension to more distant sites including the retroperitoneum, peritoneal cavity, liver, and lymph nodes. Follow-up imaging of patients with GTS is essential: MR imaging and CT are the most useful imaging examinations. Well-circumscribed masses with fat or punctuate calcifications and /or cystic areas may be seen on CT [9] (Fig. 3). MR imaging sequences using T1-weighted fat saturation sequences are recommended to detect fatty tissue within the masses (Fig. 3a). The classical appearance are similar to those of a dermoid cyst [9]. Nevertheless, some of the features on CT and MR can overlap with imaging findings of immature teratomas with the presence of cystic, fatty and calcified elements [10] (Fig. 3). However, immature teratomas are typically larger, less well defined with a prominent solid component and associated with foci of haemorrhage [1]. 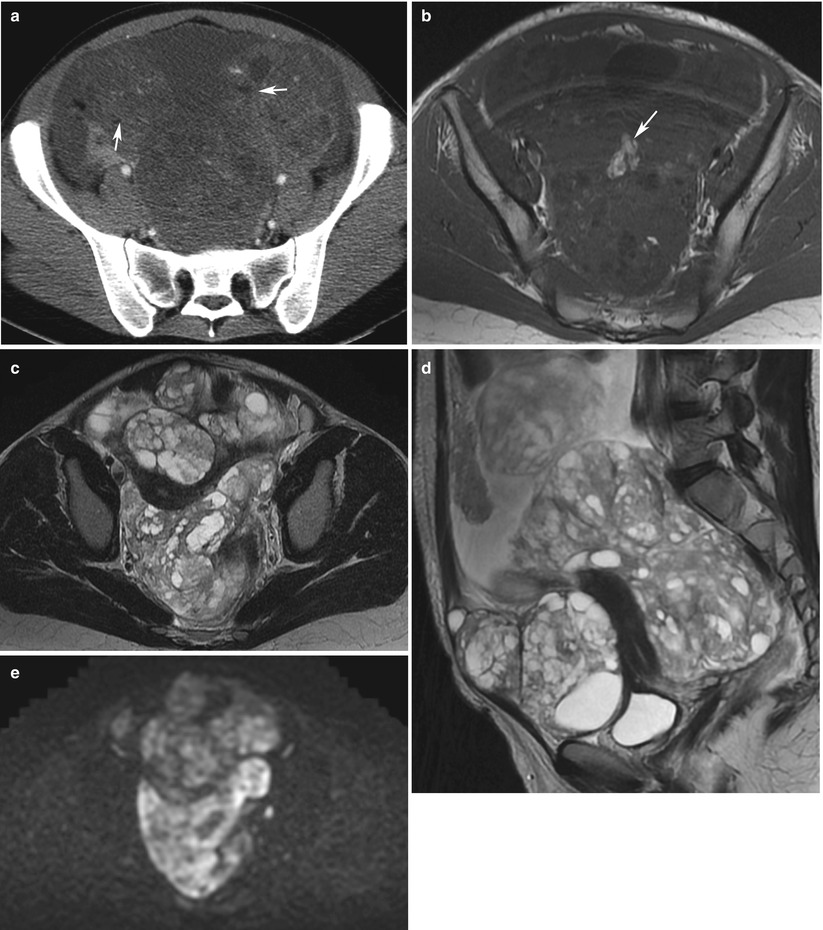 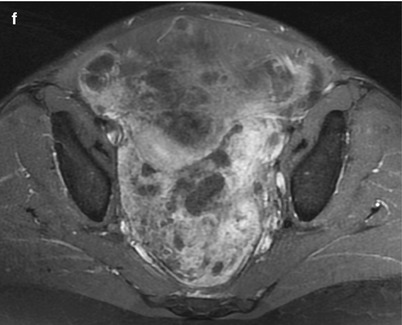 Growing teratoma in a 22-year-old woman, treated previously with surgery and chemotherapy for an immature teratoma. CT with injection (a), MRI (axial T1w, b); axial T2, (c); sagittal T2, (d); b1000 DWI, (e); axial T1w with gadolinium chelates injection and fat suppression, (f). A large solid-cystic heterogeneous pelvic (a, c) and abdominal mass (d) appeared shortly after chemotherapy treatment for an immature teratoma. Fatty tissue is seen within the mass (a and b, arrow) Histology with complete surgical excision revealed mature teratoma, corresponding to a growing teratoma. This lesion is hyperintense on DWI (e) and enhances heterogeneously after injection (f). No recurrence occurred after complete surgical excision
Complete surgical resection of recurrent masses in GTS is recommended when feasible [9].

Yolk sac tumours of the ovary or endodermal sinus tumours are highly malignant germ cell tumours. They are most commonly encountered in women in the second and third decades and are rare in women over 40 years [11]. These lesions are rare, occurring in less 1 % of malignant ovarian tumours, 20 % of malignant germinal tumours. Rarely asymptomatic, it spreads outside of the pelvis in 50 % of cases (metastases in 40 % of cases) [12]. Few radiological descriptions are published in the literature. Imaging findings of yolk sac tumours vary from entirely solid to predominantly cystic [13]. But most often these tumours are heterogeneous associating mixed solid and cystic features [11] (Fig. 4). In the study of Yamaoka et al. [11], four lesions identified on MRI exhibited areas of haemorrhage on T1-weighted sequences. Another characteristic is high vascularisation (Fig. 5). In this study, all four tumours were associated with high signal voids, indicating rich vascular supply. On post-contrast CT or MR imaging, these areas are highly enhanced defining the “bright dot sign”, because of dilated vessels. Moreover, solid parts may strongly enhance, in a more prominent way than the uterine myometrium. Stromal oedema is often seen on microscopic analysis and might be detected with high-signal intensity on T2-weighted images with prominent enhancement on post-contrast images (Fig. 6). Striking enhancement is also commonly seen on yolk sac ovarian tumours [11]. Striking enhancement may be also seen on sclerosing stromal tumour, which is one of differential diagnosis. Nevertheless, the rim of hypointensity on T2-weighted sequences with pseudolobulated lesions, such as low-intense nodules closed to high-intense stroma on T2-weighted images, may help to differentiate sclerosing stromal tumours from yolk sac tumours [14]. These tumours grow rapidly and have a poor prognosis [15]. Finally, yolk sac tumours are usually associated with an elevated serum level of α-fetoprotein. Ascites and hydronephrosis must be carefully examined. 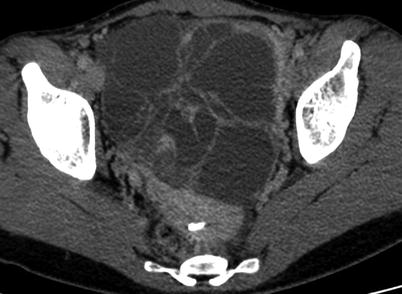 Yolk sac ovarian tumour in a 44-year-old woman. CT with iodium injection. A left heterogeneous cystic mass is seen with thick septations in the left part of the uterus, developed in left ovary. Suspicious features include thick wall, thick septations and large size 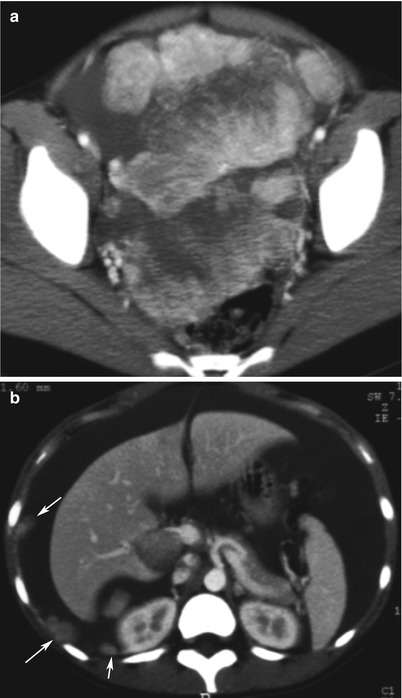 Yolk sac tumour in a 13-year-old girl. CT with iodium injection (a, pelvis: b, abdomen). A 15 cm heterogeneous solid mass is located in the pelvis. High vascularisation is clearly seen on injected images (a). Malignant features include high vascularisation, ascites and peritoneal implants (b, arrows) 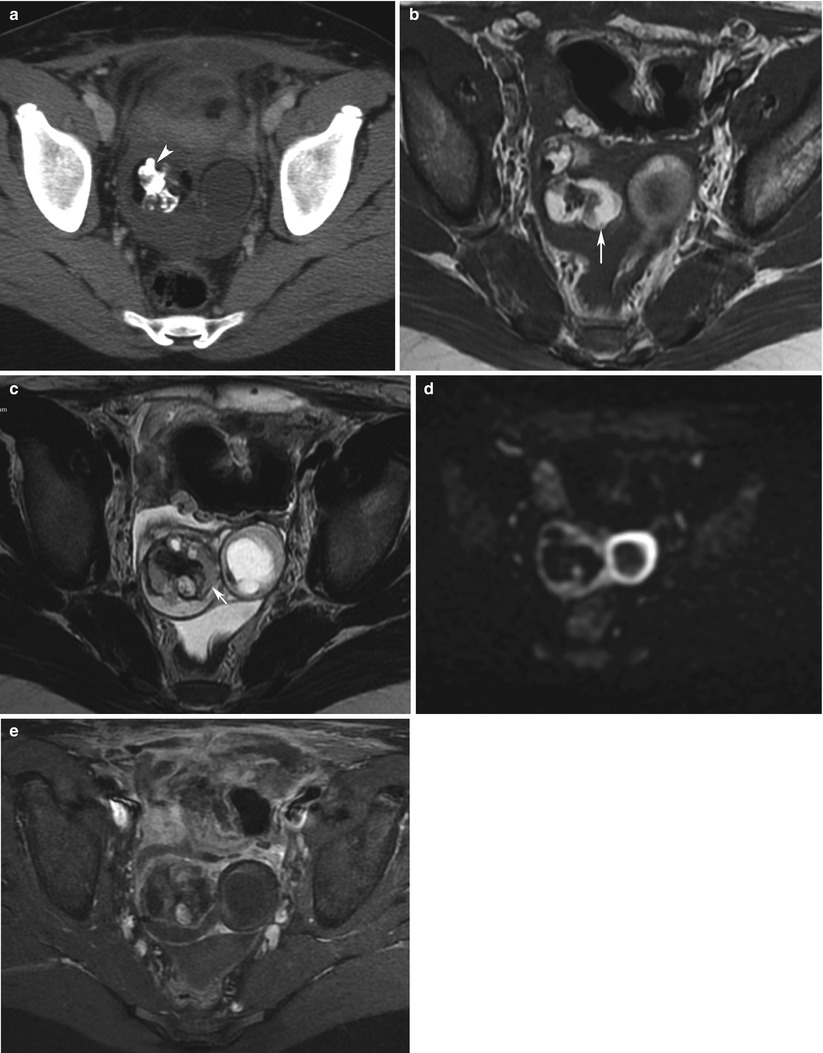 Right yolk sac ovarian tumour (YST) associated with a mature teratoma in a 13-year-old girl. CT with injection (a), MRI (axial T1w, b: axial T2w, c; d, DWI b1000; e, axial T1 with Fat suppression and injection). A heterogeneous complex mass is seen in the right ovary. Mature teratoma might be associated to yolk sac tumour. Fat (arrows) and calcifications (arrowhead) are more likely suggestive of a teratoma. Pathology revealed a YST mixed within the teratoma. DWI depicts a hyperintense tumour with high cellularity (d)
Endodermal sinus tumour may be associated with teratoma in 15 % of cases [11]: in this case, coarse calcifications or fatty tissue contrast with high vascularity due to the yolk sac tumour component (Fig. 6).

Ovarian choriocarcinoma accounts for less than 1 % of ovarian tumours and the mean age of presentation is 15 years [16]. This tumour is generally associated with other germ cell tumours. Gestational ovarian choriocarcinoma can be metastatic (associated with intrauterine pregnancy) or primary (associated with ectopic ovarian pregnancy). The essential diagnostic criteria for non-gestational choriocarcinoma need exclusion of coexisting disease in the uterine cavity, molar pregnancy and intrauterine pregnancy [17].
Suggestive findings include a large, unilateral, hypervascular adnexal mass with multiple cystic cavities located in the peripheral part of the ovary and presence of haemorrhage associated with high β-hCG level “empty” uterus [17] (Fig. 7). MR may confirm the presence of haemorrhage with hyperintense foci on T1-weighted sequences [18]. Haemorrhagic content and necrotic changes are mostly located in the central part of the tumour (Fig. 7). CT can also show some calcifications within an ovarian heterogeneous mass [18]. 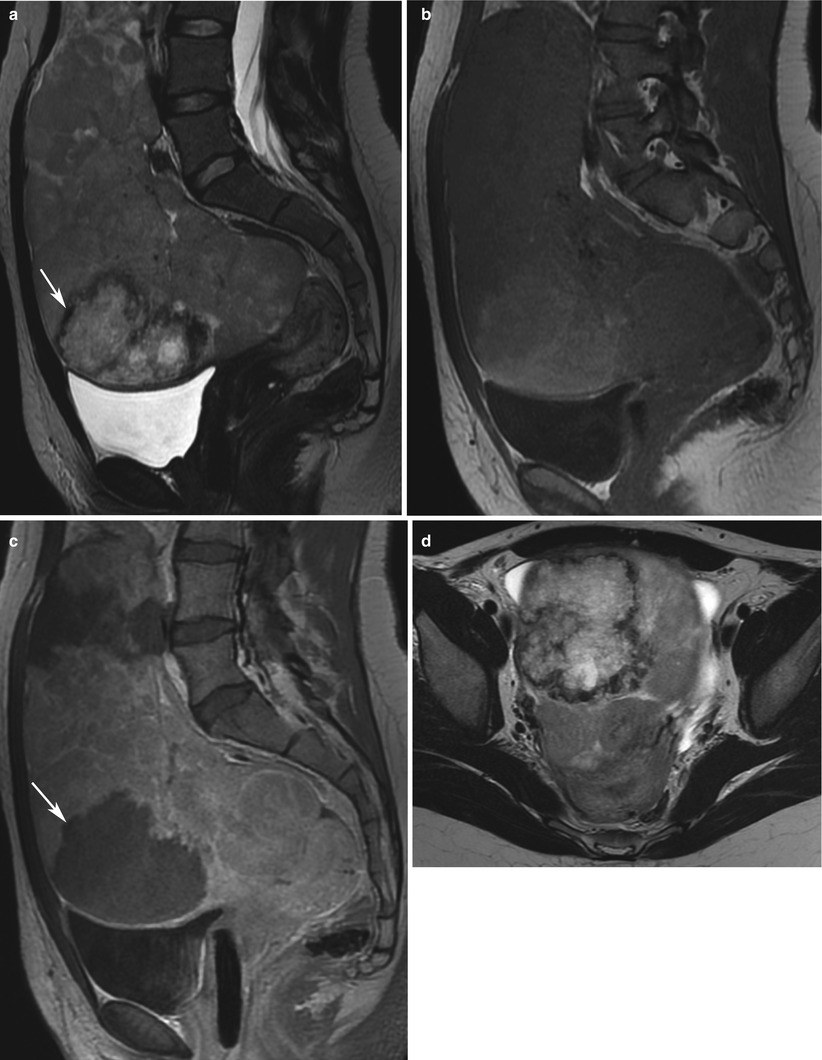 Ovarian choriocarcinoma in a 23-year-old woman. MRI (sag T2w, a; sag T1w, b; sag T1w with injection, c; axial T2w, d). Uterus is posteriorly displaced by a huge solid, heterogeneous ovarian mass. Central necrosis with oedema (arrows) might suggest the diagnosis of choriocarcinoma, with a high level of β-hCG and a non-gravid uterus (a)

This malignant germ cell tumour is the ovarian counterpart of the embryonal carcinoma of the testis, even if it is less frequent. No study has described imaging features of this rare tumour: it is usually a heterogeneous mass with necrotic and haemorrhagic parts.

Eight per cent of the ovarian malignant germ cell tumours are mixed as compared to 40 % of the testicular tumour [19]. Imaging findings show a solid heterogeneous mass varying according to different histological components.

Dysgerminoma is the ovarian counterpart of the seminoma in the testis. It is the most common malignant germ cell tumour occurring during the second and third decades of life [20]. Dysgerminoma are usually not associated with endocrine hormone secretion. Nevertheless, in 5 % of cases elevation of serum HCG levels are encountered. Even if diagnosis of a choriocarcinoma or embryonal carcinoma component will not be diagnosed by imaging, it is important to identify these components because it usually worsens the prognosis [21]. Dysgerminomas are usually large solid masses with a smooth lobulated external surface (Fig. 8). Ultrasound is the first imaging method to be done: dysgerminomas display inhomogeneous solid masses divided into lobules, with irregular hypoechoic lines, which may harbour a branching pattern. At Doppler examination, dysgerminomas have a prominent vascular pattern with branching off multiple vessels from a main feeding artery. The core of the tumour consisting in a highly vascularised tree contrasts with a highly vascularised ring at the periphery. Masses are well defined without any evidence of neighbour-organ invasion [22]. Some authors [23] showed prominent arterial flow with low arterial resistive index. Thus, every adnexal solid mass in a 20-year-old woman, with a lobule-like pattern, and signs of malignancy should raise the possibility of a dysgerminoma. The most common findings include multilobulated solid masses with fibrovascular septa [15] (Fig. 9). Because of fibrous contents, the septa appear as hypointense lines at MRI on T2-weighted sequences (Fig. 9a, b) [20]. On T1-weighted images, the lobules have the same signal intensity as the fibrovascular septa, so they can be overlooked (Fig. 9c). As there is usually important vascular component, fibrovascular septa exhibit intense enhancement after gadolinium-chelate injection and on contrast-enhanced CT. Some tumours also can show high-signal intensity areas corresponding to necrosis and haemorrhage [15]. Speckled calcifications are unusual and different from teratoma-related coarse calcifications and can be seen on CT. Their presence suggests a dysgerminoma rising from a pre-existing gonadoblastoma [19]. 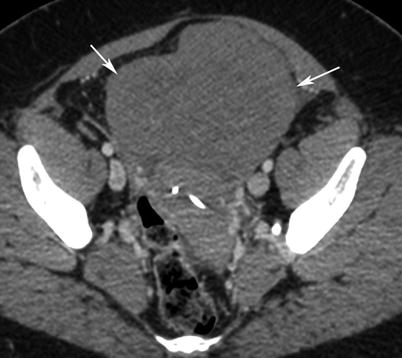