Clear cell carcinoma with paraneoplastic migratory thrombophlebitis in a 40-year-old woman who presented with sudden respiratory distress by pulmonary embolism. (a) Contrast-enhanced CT of the thorax shows pulmonary embolisms in the bilateral pulmonary (arrowheads). (b) CT at the inguinal level shows a venous thrombus in her right femoral vein (arrow). (c) CT of the pelvis demonstrates a well-demarcated cystic mass containing irregular-shaped solid components ventrally (arrowheads). Ascites (asterisk) is present in her left pelvic cavity

CCCs usually present as a large cystic mass, and they rarely occur in bilateral. CCC tends to present in early FIGO stages, with 35–60 % in stage I disease and 9–22 % in stage II. However, stage I CCC is more likely to be stage IC, probably because of higher risk of tumor rupture [6]. Their tendency of early clinical stage at presentation is explained by that CCC usually arises from preexisting endometriomas. However, clear cell carcinoma in early stages had a poorer outcome or a tendency toward poor outcome compared with other ovarian carcinomas [7, 8].
The gross appearances of CCC are characterized by multiple mural nodules within a thick-walled unilocular cyst, which represent endometriomas (Fig. 2) [4]. On MR imaging, the content of the cysts typically shows high intensity on T1-weighted images, as usually seen in endometriomas. However, the signal intensity on T2-weighted images is usually high, rather than low intensity commonly seen in endometriomas [9]. The neoplastic nodule in CCC can show variable size, ranging from tiny nodule to large mass that is about to fulfill the entire cystic cavity. On MR imaging, they usually show low intensity on T1-weigthed images, but variably low to high intensity on T2-weighted images (Fig. 3). Post-contrast image reveals enhancement in the nodules. The confirmation of enhancement on post-contrast image is important for differentiating neoplastic mural nodules from coagulated clots, which are commonly seen in endometriomas but never enhanced. Imaging features in CCCs described above are also seen as endometrioid adenocarcinomas, which can also arise from endometrioma. However, the presence of simultaneous thromboembolitic events, including thrombophlebitis, pulmonary embolisms, and infarctions of many organs, may suggest the diagnosis of CCC (Figs. 1 and 3). 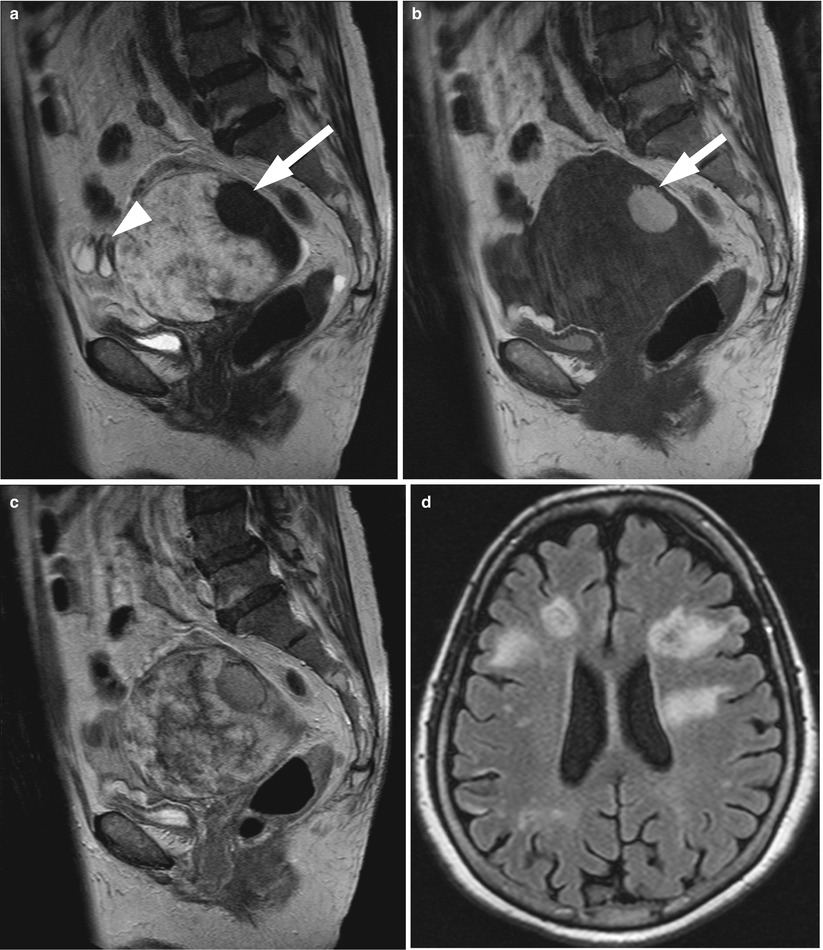 Clear cell adenofibromas (CCAs) of borderline malignancy is also called as atypical proliferative clear cell tumor [4]. The gross appearance of these tumor is characterized by microcystic structures of honeycomb appearance, embedded within firm rubbery stroma [4]. Histology of these tumors shows tubular glands lined by a layer of hobnail cells. In CCA of borderline malignancy, the glands are more crowded, and the cells display nuclear atypia. These tumors are considered to be precursors of CCCs, and clear cell carcinoma may accompany these tumors. As like CCCs, these tumors may associate with endometrioma. Although imaging findings of CCAs have not been documented, our experience case of CCA appeared as multilocular cystic mass containing numerous fine septi (Figs. 4 and 5). The areas with abundant fibrous stromas in CCA were demonstrated as solid component of low intensity on T2-weighted images (Fig. 4).

Borderline Brenner tumor in the right ovary and benign Brenner tumor in the left ovary. (a) Axial T2-weighted image shows bilateral ovarian tumors. Right ovarian tumor is composed of a cystic component dorsally and a solid component (arrow), which exhibits heterogeneously intermediate intensity. Left ovarian tumor is a lobulated solid mass of distinct low intensity (arrowheads). (b) Post-contrast T1-weighted image with fat suppression demonstrates marked but heterogeneous enhancement in the solid component (arrow) of the right ovarian mass and poor enhancement in the left ovarian mass (arrowhead)
Only gold members can continue reading. Log In or Register to continue