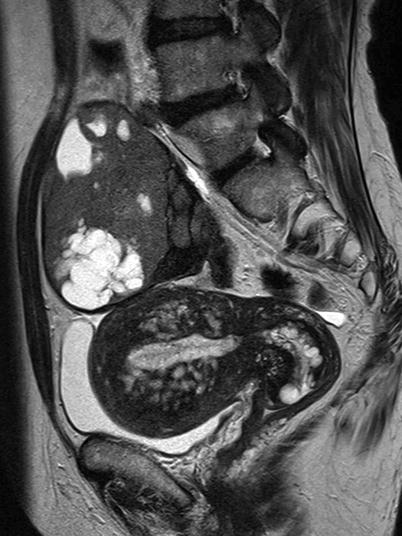 Granulosa cell tumor in a 68-year-old woman. T2-weighted image demonstrates a predominantly solid tumor of intermediate intensity, containing multiple cystic foci of high intensity. The uterus is abnormally enlarged with thickened endometrium. The thickened myometrium contains numerous foci of high intensity same as the endometrium, reflecting the ectopic endometrium in adenomyosis, which is quite unusual for this age of the patient 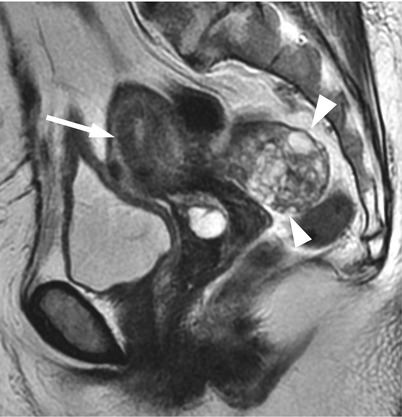 Granulosa cell tumor in a 70-year-old woman. T2-weighted images reveal a multilocular cystic tumor (arrowheads), consisting of small locules of bright intensity and irregular septations. The uterus is enlarged for this age, and the junctional zone is clearly observed (arrow) 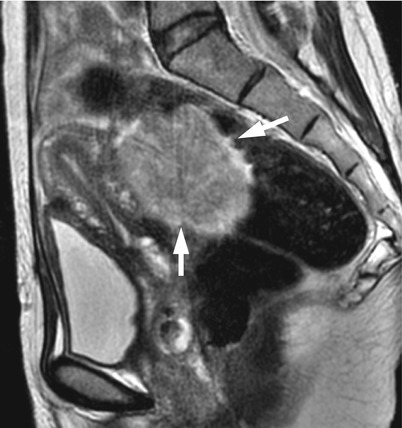 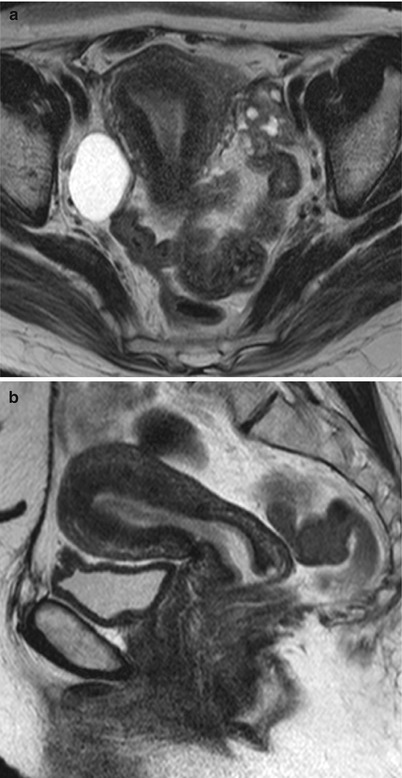 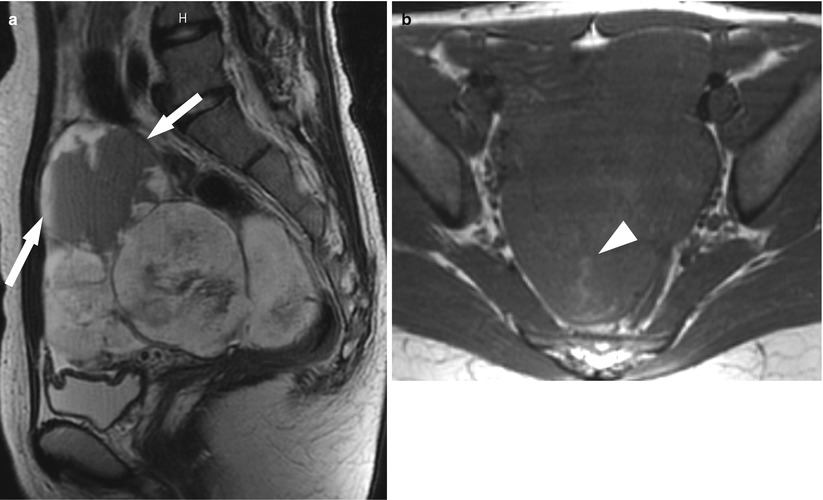 Fibromas and thecomas are virtually benign tumors commonly seen in pre- and postmenopausal women and are the most common sex cord-stromal tumor, constituting half of all sex cord-stromal tumors. These tumors constitute a spectrum of tumors, ranging from purely fibroblastic tumor to pure thecoma composed of lipid-rich theca cells, which is estrogenic. Thus, the tumors with intermingled pathology between fibroma and thecoma are often designated as fibrothecoma.
Thecoma and fibrothecoma are less commonly estrogenic than GCTs and occur in older patients, who commonly present with abnormal genital bleeding and associate with endometrial hyperplasia and carcinomas [14]. In contrast to thecomas and fibrothecomas, ovarian fibroma is not estrogenic. Ovarian fibromas and fibrothecomas may rarely be associated with ascites and pleural effusion, the condition known as Meigs syndrome (Fig. 7). Although this condition may lead to a mistaken impression of a malignant condition, this manifestation is dramatically resolved following the removal of the tumor [15, 16]. Ascites alone of a variable amount is commonly associated with ovarian fibromas [17, 18]. Ovarian fibroma is also a part of the hereditary basal cell nevus syndrome known as Gorlin syndrome, which is characterized by basal cell carcinomas, keratocysts of the jaw, and extensive calcification of the dura. Fibromas in this syndrome are commonly bilateral, multinodular, and calcified and occur in young women [19–21]. 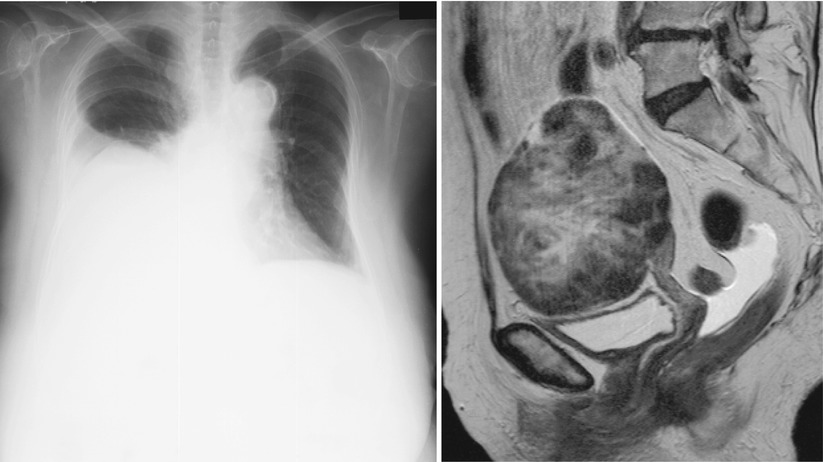 Fibroma with Meigs syndrome in an 85-year-old woman. (a) Plain radiograph shows a large amount of pleural effusion in the right thorax. (b) Sagittal T2-weighted image shows a well-demarcated solid mass, containing peripheral areas of distinct low intensity and central areas of high intensity. There is a small amount of ascites in the cul-de-sac
The gross appearance of these tumors is usually solid mass. Thecoma typically shows yellowish surface reflecting lipid content, whereas fibroma shows whitish surface reflecting collagenous matrix. The size of these tumors is usually less than 10 cm with an average of 6 cm [22]. However, they may become so large that they are mistaken as malignant tumors. Occasionally, cystic changes may be accompanied (Fig. 8). Rarely, these tumors may show extensive calcifications. 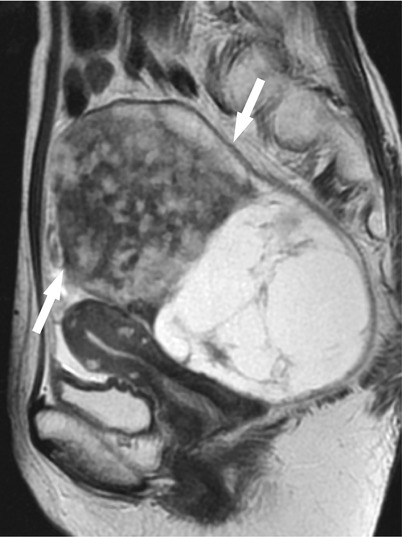 Thecoma in a 59-year-old woman. (a) Axial T2-weighted images show a well-demarcated solid tumor of intermediate intensity in her left ovary (arrows). Note that the uterus is enlarged for this age of the patient, and the junctional zone (subendometrial band of low intensity) can be clearly identified. The right ovary has a simultaneous serous cystadenoma (arrowhead). (b) Post-contrast T1-weighted image with fat suppression shows less enhancement in the left ovarian tumor, compared to the uterine myometrium 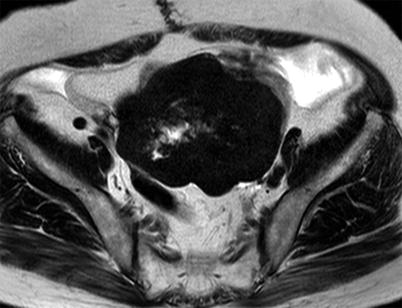 Sclerosing stromal tumor (SST) is a rare benign sex cord-stromal tumor, first described by Chalvardjian and Scully in 1973 [25]. SST occurs predominantly in young women in their second and third decades of life, with mean age of 27 years old [26]. Patients commonly present with menstrual irregularity. As well as other sex cord-stromal tumors, SST may show hormonal manifestation, which can be either estrogenic or androgenic [27–29]. Histologically, SST is characterized by cellular areas mainly composed of theca cells with increased vascularity, which are separated by “sclerosing” hypocellular areas which consist of densely collagenous stroma. The sclerosing areas are often accompanied by edematous change.
On MR imaging, SST consists of heterogeneous solid components of low to high signal intensity on T2-weighted images (Fig. 11). The areas of low intensity are considered to represent microscopically cellular areas, whereas those of high intensity are considered to represent edematous area. On post-contrast T1-weighted images, the areas of decreased intensity on T2-weighted images are well enhanced, reflecting rich vascularity in the cellular areas. When dynamic contrast-enhanced imaging is obtained, the areas are known to show striking early enhancement [30–32]. 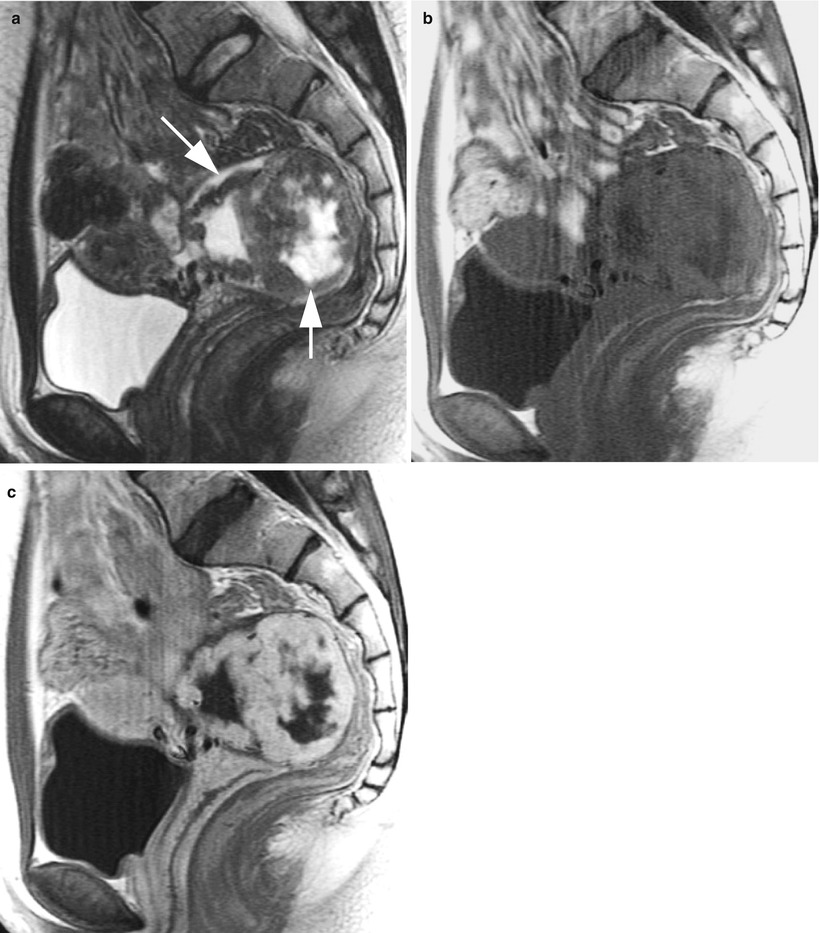 Sertoli-Leydig cell tumor (SLCT) is the most common virilizing tumor, although it represents only 0.5 % of all ovarian tumors. This tumor belongs to a category of Sertoli-stromal cell tumors, which encompass a spectrum of tumors composed of Sertoli cells, Leydig cells, and fibroblasts in varying proportions. Other tumors within this group include pure Sertoli cell tumors and pure Leydig cell tumors, but they are extremely rare.
SLCT commonly affects young females, and approximately 75 % of the patients are less than 30 years old [33]. SLCT is the most common androgen-producing tumor, and virilization can be a clinical clue to suspect this tumor. However, SLCTs in patients with virilization tend to be small and may not be detected on ultrasonography or CT [34]. Meanwhile, two-thirds of all SLCTs are nonfunctioning and their clinical symptoms are nonspecific [33]. SLCT is stage I at the presentation in 92 % of cases and the majority of tumor behaves as benign [33, 35].
Only gold members can continue reading. Log In or Register to continue