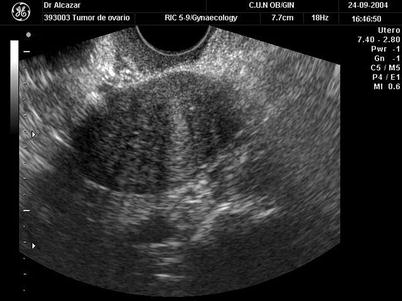 Transvaginal ultrasound from an ovarian fibroma. As in the previous figure, a rounded, well-defined, purely solid adnexal mass is seen. However, in this case acoustic shadowing is more evident 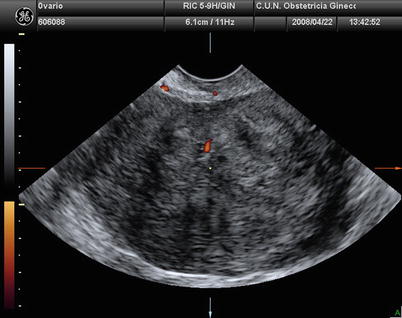 It is important to make an accurate image diagnosis of ovarian fibromas because they often appear as nonspecific solid masses, thereby mimicking uterine fibroids or malignant neoplasms. There are some features to help differentiate ovarian fibromas from the more common uterine fibroid or ovarian malignancies. Firstly, when the ultrasound scan shows a solid pelvic mass next to but without a clear connection with the uterus, the diagnosis of a subserosal fibroid should be made with caution, and the possibility of an ovarian fibroma should be considered, unless a normal ovary can be clearly seen on the same side. Secondly, the vascular pattern on color flow Doppler assessment has been suggested to be useful in differentiating a uterine fibroid from an ovarian fibroma. A well-vascularized solid pelvic mass with high-speed flow is suggestive of a subserosal fibroid, while a less vascularized tumor with low-speed flow points towards the diagnosis of an ovarian fibroma. Thirdly, a primary ovarian carcinoma is less likely to be a completely solid mass, while a secondary ovarian malignancy is typically a bilateral instead of a unilateral disease. Finally, supplementary computerized tomography and magnetic resonance imaging may help to improve the diagnostic accuracy. Most ovarian fibromas appear as a solid mass with delayed accumulation of contrast medium on computerized tomography scan and show marked T1 and T2 hypointensities on magnetic resonance imaging [15, 16].

Fibrothecoma is the term commonly used to refer to a tumor with features that are intermediate between a fibroma and a thecoma.
Ovarian fibrothecomas are composed of an admixture of fibrous and thecomatous elements. Macroscopically these tumors are virtually indistinguishable from ovarian fibromas and often have a white whorled appearance closely resembling uterine leiomyomas. The tumor may be spherical or lobulated and is covered by intact ovarian mucosa. Edema and cystic degeneration are relatively common, especially in large fibrothecomas, whereas calcification and hemorrhage are rarely observed [18, 19].
Histologically, in comparison with fibromas, fibrothecomas show significant cellularity, a relatively large amount of collagen, and, in up to 50 % of cases, pronounced edema [18]. These tumors include spindle, oval, or round cells forming various amounts of collagen (cells that form fibromas) in addition to a smaller population of lipid-laden typical theca cells that can be present in small clusters [19, 20]. The presence of luteinized thecal cells would change the diagnosis to luteinized thecoma [18].
The clinical presentation of ovarian fibrothecomas is relatively nonspecific, and patients most commonly present with a pelvic mass, pelvic pain, and metrorrhagia [20]. The clinical examination generally finds a solid, mobile tumor with a regular surface and variable size. Rarely, fibrothecomas present with endocrine manifestations related to hormonally active tumors. In these cases, estrogenic or even some rare androgenic manifestations are reported [17]. Hormonal activity of these tumors depends upon the extent to which they resemble fibromas (lipid-poor, hormonally inert) or thecomas (lipid-containing, hormonally active) [21].
The sonographic appearance of ovarian fibrothecomas is usually nonspecific, showing a broad spectrum of sonographic features, which include especially echogenic and mixed echogenicity masses (Fig. 4). Hypoechoic masses have been also reported [17]. In large tumors areas of edema and cystic degeneration may be observed. Differential diagnosis of fibrothecomas includes pedunculated and intraligamentous leiomyomas and other solid ovarian masses such as Brenner tumors, granulosa cell tumors, and dysgerminomas. If extensive cystic degeneration is observed, the fibrothecoma can be easily mistaken for a malignant ovarian tumor [19, 20]. 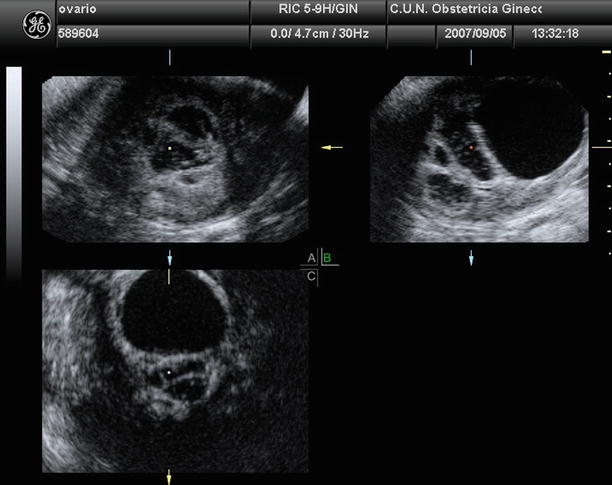 Ovarian thecoma is a rare solid fibromatous benign tumor of stromal cell origin, accounting for approximately 0.5–1 % of ovarian tumors [22]. Most thecomas are unilateral (bilateral in 3 % of cases), reach a size within 5–10 cm, and occur in pre- and postmenopausal women of 50–60 years of age (average age 59 years). Less than 10 % of the cases are encountered before the age of 30 years [6, 23].
Macroscopically, the appearance is typically that of firm or rubbery solid tissue, with a color ranging from white to yellowish due to the presence of accumulated lipids. Edema either focal or diffuse may be observed, with the presence of cyst formations being rare [6]. Histologically, they are solid tumors formed by stromal cells that resemble the theca cells that normally surround the ovarian follicles. Microscopic analysis reveals masses of round or ovoid cells, the nuclei of which have become rounded and the cytoplasm pale and vacuolated due to its large content of lipids. Hyaline bands frequently are observed interspersed with cells [6, 24].
These tumors usually exhibit estrogenic activity, and therefore, patients may show subsequent clinical manifestations, including postmenopausal uterine bleeding, endometrial hyperplasia, and endometrial cancer. It is estimated that 60 % of patients with this tumor present uterine bleeding, and more than 20 % have endometrial carcinoma. Because of their late age of onset, it is very unusual for sexual precocity to occur. Rarely, a thecoma causes virilization (11 % of cases). Most thecomas are benign, and surgical excision is curative [5, 22].
At ultrasound, a thecoma may manifest as an echogenic mass with distal acoustic attenuation, a well-defined hypoechoic mass, or an anechoic lesion with through transmission (Fig. 5). Secondary features of hyperestrogenism, such as endometrial thickening, also may be seen on ultrasound images [22]. 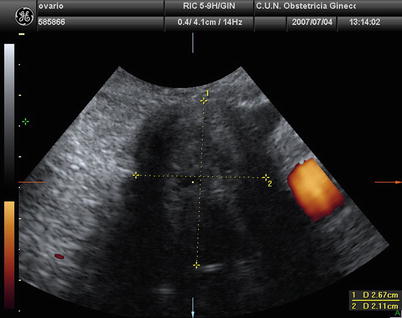 Transvaginal ultrasound from an ovarian thecoma. The lesion is solid with significant acoustic shadowing. No vessels are detected with power Doppler examination

Although granulosa cell tumors are considered as low potential tumors and not strictly as benign tumors, we shall consider the description of these tumors.
Granulosa cell tumors are rare sex cord ovarian tumors that are formed by cells believed to be derived from those that surround the germinal cells in the ovarian follicles. Two major forms of granulosa cell tumors are recognized: the adult form, which primarily occurs in middle-aged and older women, and the juvenile form, which typically occurs in children and younger women [10].
Most adult granulosa cell tumors are partially cystic, with multiple fluid-filled or blood-filled loci and solid areas. They represent approximately 95 % of all granulosa cell tumors. These tumors, the majority of which are unilateral, most often occur in postmenopausal women. Adult granulosa cell tumors are the ovarian tumor type most commonly associated with manifestations that are caused by the overproduction of female sex hormones (estrogenic manifestations). These manifestations include endometrial hyperplasia and endometrial cancer, which are present in 5–25 % of cases. Adult granulosa cell tumors are considered to be tumors of low-grade or low malignant potential. Ninety percent are stage I at diagnosis, with a reported 10-year survival rate of 86–96 %; the corresponding reported survival rate for patients with tumors found at more advanced stages is 26–49 %. Treatment is primarily surgical. Rupture of the tumor during surgery adversely affects prognosis. Recurrences can occur 30 years or more after removal. Juvenile granulosa cell tumors are grossly similar to those of the adult subtype. They account for only 5 % of all granulosa cell tumors. Most are unilateral, and approximately half occur before puberty. Because of their estrogenic hormone production, many of these tumors result in precocious sexual development. Most juvenile granulosa cell tumors are limited to the ovary at the time of diagnosis. Surgical excision is curative in most cases. Recurrences are rare and typically occur within 3 years.
On ultrasound scan these masses appear as multilocular solid (52 %) or purely solid (39 %) masses (Fig. 6). Vascularization usually is moderated (Fig. 7). Multilocular solid cysts typically contain large numbers of small locules. The echogenicity of the cyst content was most often mixed or low level. Papillary projections can be found in 17 % of the cases [25]. 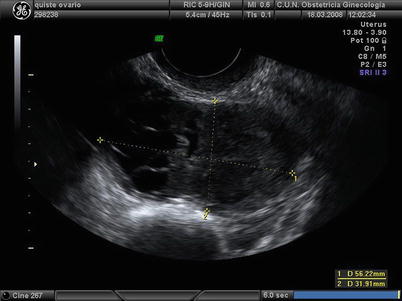 Transvaginal ultrasound from a granulosa cell tumor. The lesion appears as a cystic-solid mass. Note that the cystic component is multiloculated with small locules 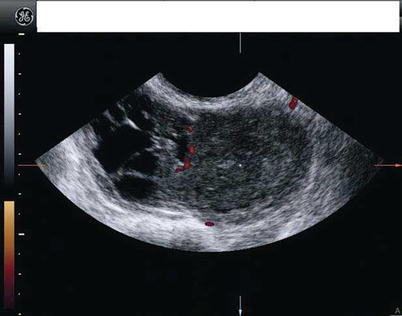 Ovarian Sertoli cell tumors and Sertoli-Leydig cell tumors are sometimes called Sertoli-stromal cell tumors, androblastomas, or arrhenoblastomas. They account for less than 1 % of all ovarian tumors and are most common in young patients. Approximately 75 % occur in women under the age of 30 years (mean age at diagnosis 25 years); less than 5 % are encountered in prepubertal girls and slightly over 10 % after the age of 45 years. Almost all cases present at stage I and may have androgenic, estrogenic, or progestagenic manifestations, but many have no endocrine manifestations at all. Prognosis is usually favorable, except for those poorly differentiated or with heterologous elements [6, 8, 26].
These tumors are composed of Sertoli cells, Leydig cells, and fibroblasts in varying proportions and varying degrees of differentiation [26].

The mean age at diagnosis of Sertoli cell tumors is 30 years. They are lobulated, solid, yellow or brown tumors and rarely metastasize. These tumors may be large (mean diameter 9 cm) and are usually unilateral [5, 26].
Sertoli cell tumors are formed by cell proliferations that resemble the rete ovarii and rete testis, which characteristically are arranged in hollow or solid tubules dispersed within fibrous stroma containing no or only a few Leydig cells [5, 26]. The predominant microscopic pattern of ovarian Sertoli cell tumors is tubular, but other patterns, particularly cord-like and diffuse, are common [1].
These tumors usually do not exhibit hormonal activity, but they may produce estrogens that can induce precocious puberty, bleeding disturbances, and hyperplastic endometrium or, in rare cases, can be associated with androgenic effects and the development of virilization [5, 26]. Some of these tumors may also secrete renin, leading to refractory hypertension and hypokalemia [27].
At ultrasound, most Sertoli cell tumors are large solid tumors, confined to the ovary at presentation, and not associated with ascites or calcification (Fig. 8). When these tumors are small, they can be difficult to identify by ultrasound [26, 28]. 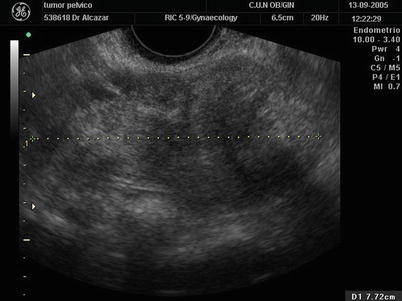 Sertoli-Leydig cell tumors account for less than 0.5 % of all ovarian tumors and are the most common virilizing tumor. However, only 30 % of these tumors are hormonally active [14].
Sertoli-Leydig cell tumors are formed by variable proportion of cells that resemble epithelial and stromal testicular cells. Most commonly they range in size from 5 to 15 cm. Most are unilateral (bilateral in less than 5 % of cases) and the mean age at diagnosis is in the mid-twenties. These tumors vary greatly in gross appearance and typically form a firm, solid, lobulated mass with a smooth external surface. However, although they usually show a structure of solid tumor, they may also be partially cystic, or completely cystic, and may or not have polypoid or vesicular structures in their interior [5, 22].
Histologically they are composed of a combination of Sertoli cells, Leydig cells, and fibroblasts [5, 22]. They may be well, moderately, or poorly differentiated, retiform, and mixed, although there is considerable overlap between the different subtypes. Well-differentiated tumors have a tubular pattern, usually without heterologous or retiform components. The single most common pattern of the tumors of intermediate differentiation is a striking nodular growth with large cellular blue nodules being intersected by a stroma that is often edematous [1]. Poorly differentiated tumors may be difficult to distinguish from pure sarcomas and present as differential features small diagnostic areas composed of clusters of dark blue Sertoli cells and some cells that are consistent with Leydig cells or their precursors [1]. Retiform Sertoli-Leydig cell tumors have a tubular pattern with elongated, often slit-like, branching tubules that may focally or extensively be cystically dilated and may contain large papillary projections into the tubules and cysts [1, 5, 26]. Mixed tumors do not differ significantly from otherwise subtypes of Sertoli-Leydig cell tumors, but some of them are predominantly cystic and on microscopic examination have heterologous elements of two basic types: endodermal elements, characterized by gastrointestinal-type epithelium, and mesenchymal elements, immature skeletal muscle or cartilage [1].
About half of Sertoli-Leydig cell tumors have no hormonal activity, and endocrine manifestations and symptoms may be pain or abdominal swelling. About a third of Sertoli-Leydig cell tumors show increased levels of testosterone, androstenedione, and other androgens and are associated with virilization, presenting symptoms as oligomenorrhea, amenorrhea, breast atrophy, hirsutism, acne, deepening of the voice, clitoris hypertrophy, or male pattern baldness. Occasionally Sertoli-Leydig cell tumors are hyperestrogenic, presenting symptoms such as menorrhagia/metrorrhagia or postmenopausal bleeding. Rupture or spread outside the ovary complicates some of these tumors but ascites is rare. After surgical removal of a virilizing Sertoli-Leydig cell tumor, menses usually resume within a month, some excessive hair may disappear, but a deepened voice and clitoromegaly tend not to regress [26].
Only gold members can continue reading. Log In or Register to continue