Overview: Hepatic steatosis (fatty liver) is the most common cause of chronic liver disease in pediatric patients. It can range from simple steatosis to nonalcoholic steatohepatitis, which can progress to cirrhosis. Obesity and insulin resistance are the most common risk factors for hepatic steatosis, but it also may be associated with a number of metabolic processes and toxins (Box 90-1). The incidence is 2.6% in the general population, with a higher percentage in obese children.1 Adolescents are affected more often than younger children, with a higher prevalence in boys than girls. Fatty replacement of the liver may be diffuse or localized with areas of fatty sparing.

Clinical Presentation: Hepatic steatosis often is asymptomatic and is found incidentally on imaging performed for other reasons, such as nonspecific abdominal pain. Laboratory studies may show elevated liver enzymes (i.e., alanine aminotransferase and aspartate aminotransferase).1 Histologically, hepatocytes contain large cytoplasmic fat vacuoles filled with triglycerides. Pathologic diagnosis of hepatic steatosis is made when more than 5% of the total liver weight is replaced by fat.2

Imaging: Ultrasound evidence of hepatic steatosis includes variable hepatomegaly, increased echogenicity of the liver parenchyma when compared with the adjacent kidney, and poor visualization of the intrahepatic vascular structures (Fig. 90-1).2 Areas of fatty sparing are seen as hypoechoic foci within the fatty liver without mass effect and should not be mistaken for a mass. Ultrasound sensitivity for steatosis decreases with lower degrees of fatty infiltration. Increased obesity of the patient limits ultrasound quality because the increased extrahepatic fat further attenuates the ultrasound beam and decreases ultrasound sensitivity for liver abnormalities, including steatosis. 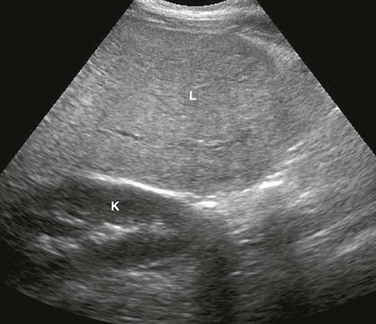 Conventional spin-echo magnetic resonance imaging (MRI) is less sensitive than CT and ultrasound for detection of steatosis. Imaging findings include increased signal intensity on T1-weighted images and decreased signal intensity on fat-saturated and short tau inversion recovery sequences. However, chemical shift imaging with in-phase and out-of-phase sequences that demonstrates loss of signal on out-of-phase images is highly specific for diagnosing hepatic steatosis.2 This modality can be particularly helpful in differentiating this condition from neoplastic disease in equivocal cases, particularly in cases with focal fatty infiltration or sparing.

MR spectroscopy is a more recently described technique that may prove to be the most accurate method to quantitatively assess hepatic steatosis noninvasively. The area under the water and lipid peaks can be measured, allowing estimation of the hepatic fat fraction with a diagnostic accuracy of 80% to 85% in adult studies.2,5,6

The gold standard for diagnosis is biopsy and histologic evaluation. However, this approach is not without risk and is impractical in most pediatric patients with suspected hepatic steatosis.

Treatment: Treatment focuses on reduction of obesity and insulin resistance with diet and exercise. The use of medications targeted at insulin resistance, such as metformin, is being investigated in the treatment of children with hepatic steatosis.2,5

Iron Deposition in the Liver

Overview: Approximately 80% of the normal iron stores of 2 to 6 g are in the form of hemoglobin, myoglobin, and enzymes that contain iron, and 20% are in the storage form of ferritin and hemosiderin. In normal situations, trace levels of iron are found in the liver, spleen, and bone marrow. When excess iron is present in the body, deposition may occur in the liver, spleen, lymph nodes, pancreas, kidneys, pituitary, and gastrointestinal (GI) tract. The body can compensate for some excess iron (10 to 20 g) without the occurrence of tissue damage, in which case the term hemosiderosis is applied. However, if functional and structural impairment of organs occurs as a result of excess iron (50 to 60 g), the term hemochromatosis is applied.

Two forms of hemochromatosis exist: primary and secondary. The primary form is the result of a genetic disorder that causes excess iron absorption through the gastrointestinal tract. This iron becomes bound to transferrin and eventually is stored as crystalline iron oxide within the cytoplasm of periportal hepatocytes. With progressive disease, the pancreas, synovium, heart, pituitary, and thyroid may be involved, but the Kupffer cells and reticuloendothelial cells of the bone marrow and spleen are spared.

The secondary, nongenetic form of hemochromatosis is more common than primary disease and may be the result of a myelodysplastic syndrome, anemia as a result of ineffective erythropoiesis, or exogenous sources from multiple transfusions, parenteral iron infusion, or ingestion. With secondary hemochromatosis, phagocytosis of intact red blood cells causes initial iron deposition within the reticuloendothelial system (i.e., the liver, spleen, and bone marrow). Once the storage capacity of the reticuloendothelial system is saturated, iron may accumulate within parenchymal cells of the organs, including the liver hepatocytes, pancreas, and myocardium, in a pattern similar to that of primary hemochromatosis.

Clinical Presentation: Patients with primary hemochromatosis usually become symptomatic in the second decade of life. Symptoms are related to organ injury from excess iron deposition and may include hyperpigmentation, hepatomegaly, arthralgia, diabetes as a result of pancreatic beta cell damage, congestive heart failure, and arrhythmia. Various other complications due to chronic hemochromatosis include periportal fibrosis, cirrhosis, and hepatocellular carcinoma. However, with early diagnosis and treatment, patients may have a normal life expectancy.7 A neonatal form of primary hemochromatosis exists in which newborns (often younger than 12 hours old) present with fulminant hepatic failure, along with pancreatic and cardiac involvement.

Imaging: Ultrasound findings are nonspecific and noncontributory to the diagnosis of hemochromatosis. CT has a low sensitivity (63%) but high specificity (96%) for the diagnosis of iron overload.8 Noncontrast CT shows homogeneous increased density of the liver greater than 72 HU.8 However, coincident steatosis can lower the HU number, causing false-negative examinations. False-positive results may be seen with Wilson disease, gold therapy, or long-standing amiodarone treatment.

MR is the imaging modality of choice for confirming the diagnosis, determining severity, and monitoring therapy in persons with hemochromatosis. Excess iron deposition causes a proportional decrease in signal intensity on T1- and T2-weighted sequences and is most pronounced on gradient echo sequences. Skeletal muscle is unaffected by hemochromatosis and serves as a good internal reference to compare the signal intensity of affected abdominal organs and bone marrow, which will be hypointense to skeletal muscle. On in-phase and out-of-phase imaging, decreased signal intensity is seen in the affected organs on the in-phase sequence (an opposite finding from steatosis). The key findings in primary hemochromatosis are low signal intensity within the liver and pancreas on T2-weighted images (Fig. 90-2). In contradistinction, secondary hemochromatosis demonstrates a low signal in the liver, spleen, and bone marrow (Fig. 90-3) with sparing of the pancreas.9 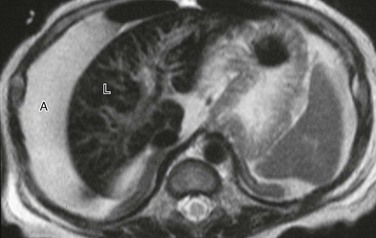 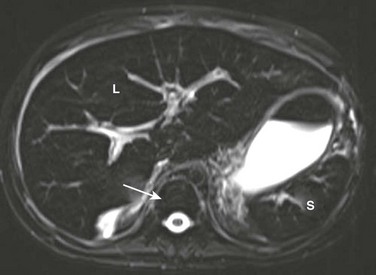 MR quantification of liver iron concentration (LIC) is possible, eliminating the need for multiple biopsies to monitor hemochromatosis. One proposed method uses multiple gradient echo sequences (T1, PD, T2, and T2*). Three regions of interest are placed on the right lobe of the liver and two on skeletal muscle; these values then can be placed in an online algorithm that estimates LIC.10 A more recently described technique utilizes breath-hold multiecho T2*-weighted sequences and generation of a line plotting the natural log of hepatic signal intensity versus time to echo (TE). The slope of the line is R2* where 1/R2* = T2*. The T2* values then can be used to stratify different grades of LIC.11

Treatment: Treatment of hemochromatosis consists of scheduled phlebotomy or chelation therapy to reduce iron levels.7 As mentioned earlier, MR quantification of LIC may be used to follow treatment regimes, obviating the need for liver biopsies.